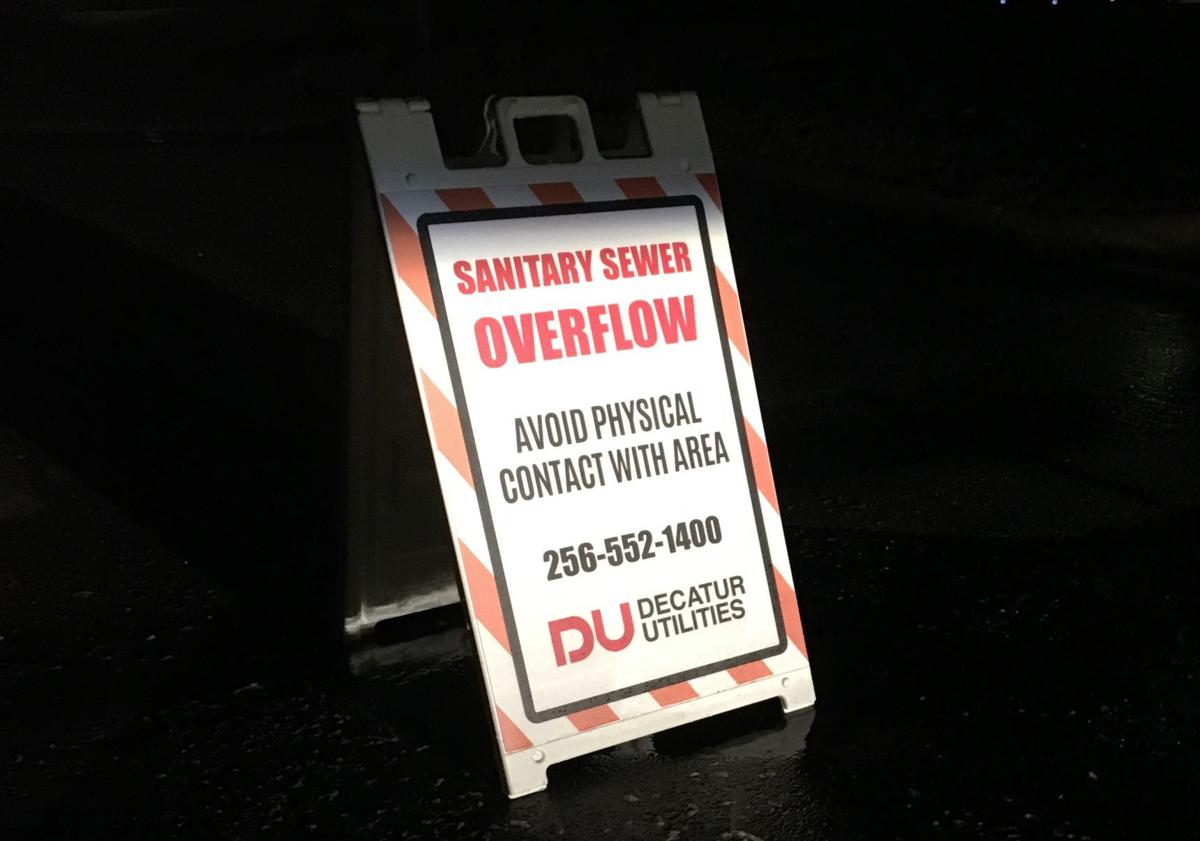 Johngelene Sanford has had enough of the sanitary sewer overflows that cover the street in front of her Sixth Avenue Southwest home after heavy rains, and she's unimpressed by Decatur Utilities' assurances that it takes the problem seriously.

More than 200,000 gallons of untreated sewage escaped from Decatur Utilities manholes near her home in Jan. 3 overflows, and 25,000 gallons were discharged onto the street the week before that.

Citywide, DU reported about 2.5 million gallons of sewer overflows from Dec. 22 to Jan. 5.

Sanford’s right to worry about her health, according to Sherri Davidson, the state epidemiologist with the Alabama Department of Public Health.

The exposure can cause significant health problems.

“There are a lot of bacteria and viruses, ones we know about and ones we don’t know about. It includes things like intestinal parasites. I’ve seen outbreaks associated with hepatitis A from exposure to raw sewage,” she said.

Among the parasites in untreated sewage are hookworms.

“Hookworms actually enter through the bottom of the foot. It gets the name hookworm because it has a little hook on the tip of it where it burrows into the bottom of your foot, into your bloodstream, through your bloodstream to your lungs. Then you cough it up and it gets into your intestines, and that’s where it reproduces,” Davidson said. “It has quite an amazing life-cycle if you think of all they go through just to replicate inside you.

Ray Hardin, general manager of Decatur Utilities, said he is not taking the issue lightly.

Even as he spoke Friday, he knew more sanitary sewer overflows, referred to as SSOs, were likely this weekend with heavy rain in the forecast. That foreknowledge is not an advantage in addressing a problem with solutions that are both expensive and slow.

“In one afternoon, there’s not much we can do,” he said.

Even when an overflow is in progress during a rain event, DU crews are helpless to stop it. They notify the Alabama Department of Environmental Management, place warning placards around the manhole, and initiate robotic calls to those in the immediate area. They clean and disinfect the area around the manhole, but take no action to notify people downstream from the discharge or to monitor receiving waters like Flint Creek and Dry Branch Creek.

"Because of the highly diluted nature of the water — I don’t have any empirical evidence on this — but I don’t think it has any impact on the receiving stream," Hardin said.

The primary cause of the overflows is infiltration of groundwater through cracked or disintegrated sewer pipe. Heavy rain overwhelms sewer-system capacity. Infiltration problems are worst in areas that have clay sewer mains, which were installed through the 1970s.

“We’ve got a lot of pipe in the ground that’s 60 years old or older. I don’t know how we got to a point where we have 60-year-old pipe, but one day when I leave here, I hope we don’t have any pipe that old,” Hardin said.

DU has spent $60 million on the sewer system over the past decade, most aimed at correcting sewer overflows.

The frequent sewer overflows triggered an enforcement action by ADEM in 2008, the year Hardin became general manager. The consent order DU reached with ADEM that year expired in 2013, at which point DU developed a 10-year plan for reducing overflows. The first phase of that plan, which concluded last year, focused on lift stations.

DU’s service area is divided into 18 basins. Basin 1 relies entirely on gravity to get sewage to the wastewater treatment plant on Alabama 20, next to Ingalls Harbor. This basin includes some of the most densely populated areas of Decatur, including the residential areas of Northwest Decatur, downtown, and a broad swath of residential neighborhoods along Central Parkway Southwest.

To get sewage to the treatment plant from the other 17 basins, DU uses lift stations. These stations pump sewage uphill to a point where the topography permits gravity mains in Basin 1 to finish the trek to the sewer plant.

Hardin said DU’s extensive work on lift stations since 2013 has been extremely effective, essentially eliminating overflows in those areas.

That success, however, has also caused problems in Basin 1. Hardin analogizes it to whack-a-mole.

“You solve a problem here and it pops up in a different area. That’s the nature of the way water flows,” he said.

The new lift stations pump more water from throughout the city into Basin 1, including the sewer main servicing Sanford’s Sixth Avenue Southwest home. A 36-inch-diameter sewer collector runs along Central Parkway, taking sewage directly to the treatment plant. In heavy rains, with additional storm water seeping into old pipe not just in Basin 1 but in all 18 basins, the collector pipes are overwhelmed.

The result, to the frustration of Sanford and many other residents, is sewage spewing from manholes.

“It’s extremely diluted,” Hardin said. “But that doesn’t discount the fact that we understand it’s got sewer water in it. We want to eliminate that.”

Hardin said DU needs to both increase system capacity — which might include installing larger diameter pipes along Central Parkway and elsewhere — and also reduce infiltration.

“Right now our five-year plan contemplates about 30,000 feet a year at a cost of about $3 million a year over the five-year time frame,” Hardin said, noting that 26,000 feet of pipe were replaced in 2019.

That sounds like a lot, but the system has almost 2 million feet of sewer main, much of it clay pipe vulnerable to tree roots seeking the nutritious sewage inside. So at the current pace, it would take about 50 years to replace all of the pipe in the system.

In October, DU hired Barge Design Solutions Inc. to conduct an evaluation of the system. The $425,000 study, which is ongoing, focuses on the flow rate of sewage throughout the system.

“The data that will come from that study will drive where we need to spend our money. We want every dollar to be effective in reducing SSOs as we go,” Hardin said.

Hardin is considering more aggressive pipe replacement, but there are both financial and logistical challenges.

Not only is sewer replacement expensive, it’s disruptive. The simplest method of replacing clay pipe is through pipe-bursting, where high-density polyethylene pipe is essentially threaded through the space taken by the clay pipe, with the clay pipe crumbled in the process. This reduces infiltration, but does not increase capacity. And even this method causes inconvenience for customers, as DU must dig up each service line that runs to a home and reconnect it to the new pipe.

Where pipe-bursting is not feasible, the disruption increases considerably. Many sewer mains run below the center of streets, so replacement requires cutting trenches through the road.

The ongoing problems with sewer overflows prompted ADEM and the state Attorney General’s Office to sue DU in May. Tennessee Riverkeeper, a nonprofit environmental organization, joined the litigation in October.

Hardin is frustrated by the lawsuit.

“We have expressed our view to ADEM on that. I think it’s extremely counterproductive for ADEM to fine a municipality a lot of money when those dollars could certainly be used towards solving the problem,” Hardin said. “There are some reasonable people there, but there are some that are in a cubicle and have never seen the real world.”

Every overflow is a separate violation of a DU discharge permit, which only allows sewage discharges through the wastewater treatment plant. The fine for each violation — and hundreds going back to 2014 are identified in the lawsuit — can be as high as $25,000.

Decatur Utilities is unique among area utilities for the number and volume of its reported sanitary sewer overflows.

During the same Jan. 3-5 rain event that resulted in 15 overflows totaling 1.68 million gallons in Decatur, Athens Utilities reported five overflows, three of them small ones in a woods that were detected days after the overflows had stopped. A Jan. 3 overflow at 1213 E. Forrest St. emptied 4,800 gallons and a Jan. 6 overflow spilled 1,000 to 10,000 gallons of untreated sewage.

The city of Huntsville, with a sewer system almost four times the size of Decatur’s, reported 13 overflows during the Jan. 3-5 rain event. Each was estimated by the Huntsville Water Pollution Control Department, which manages the sewer system, at between 1,000 and 10,000 gallons, so the total spilled sewage reported to ADEM was from 13,000 to 130,000 gallons.

Once the Barge Design Solutions study and a separate rate study are complete, Hardin said, DU will be able to evaluate whether it can accelerate the pace of replacing old pipe. But even at the current pace, a rate increase is not out of the question.

“We can do (30,000 feet per year) without any rate increases until about the fifth year. In that fifth year there is a possibility we would have a rate increase,” he said. “A lot can happen. That rate increase might need to occur sooner, or it might not have to occur at all.”

Sanford said whatever DU is doing, it's not enough.

While it isn't an overnight fix, the plan devised years ago has failed. The $425,000 dollar study that probably is needed shouldn't be the only factor as the where the repairs need to start, common sense should be deployed also, and soon. Common sense should tell D/U that if we have sewage overflow in the thousands of gallons or more the next line of work should start there. There is absolutely no reason that any citizen should be exposed to raw sewage overflow in their neighborhood. With the city trying to attract new residents this will harm that effort tremendously. D/U's management and plans have failed the city, and added to a number of reasons that leaves Decatur undesirable to live in for new comers, and current residents, it is a Decatur Utility Failure.

Agree completely. Why do neighboring municipalities not have a similar problems, or at least not on this scale? People need to be fired over this. And that lawsuit is a good start too. This whole situation is disgusting, dangerous, and dumb.