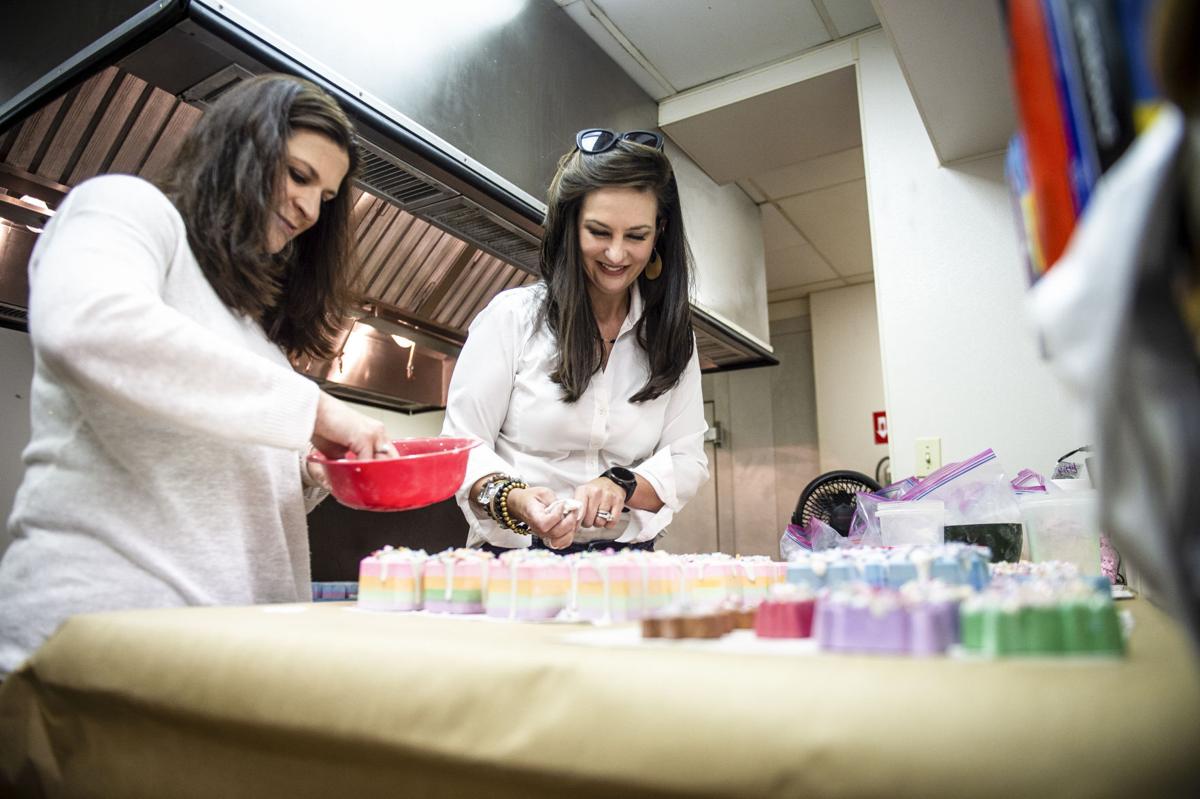 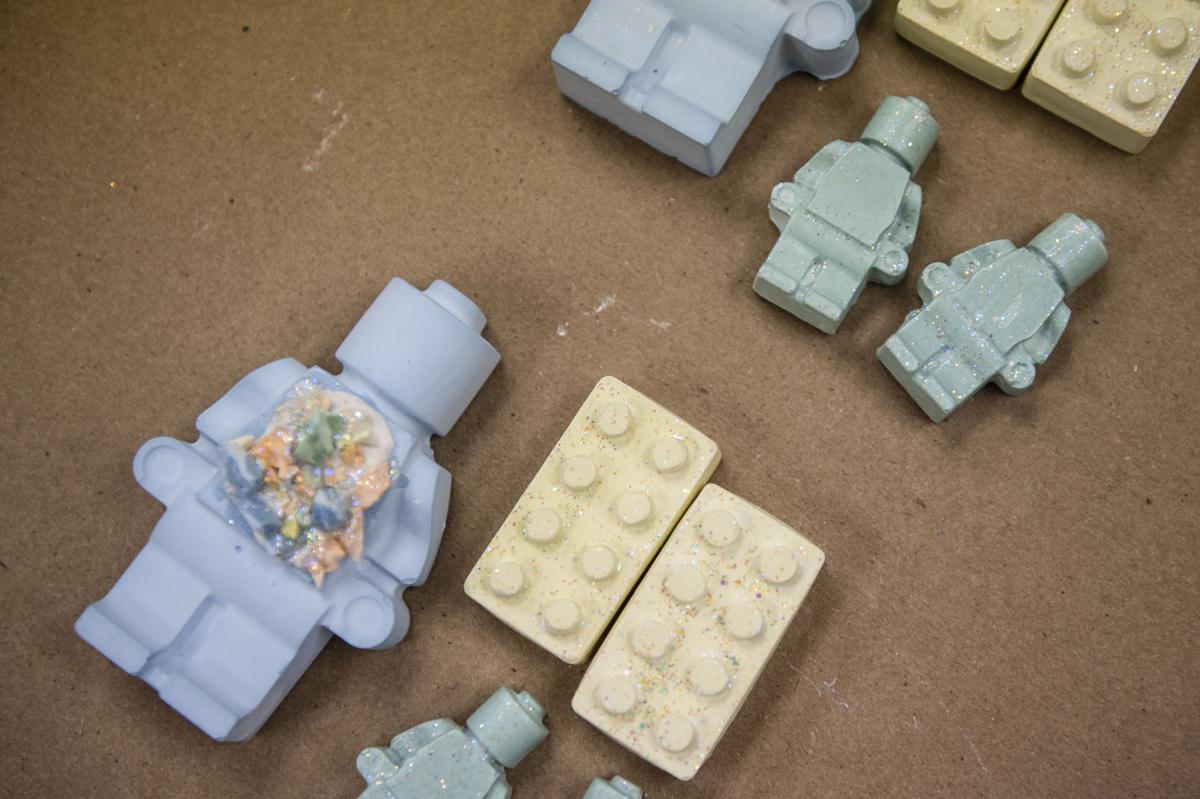 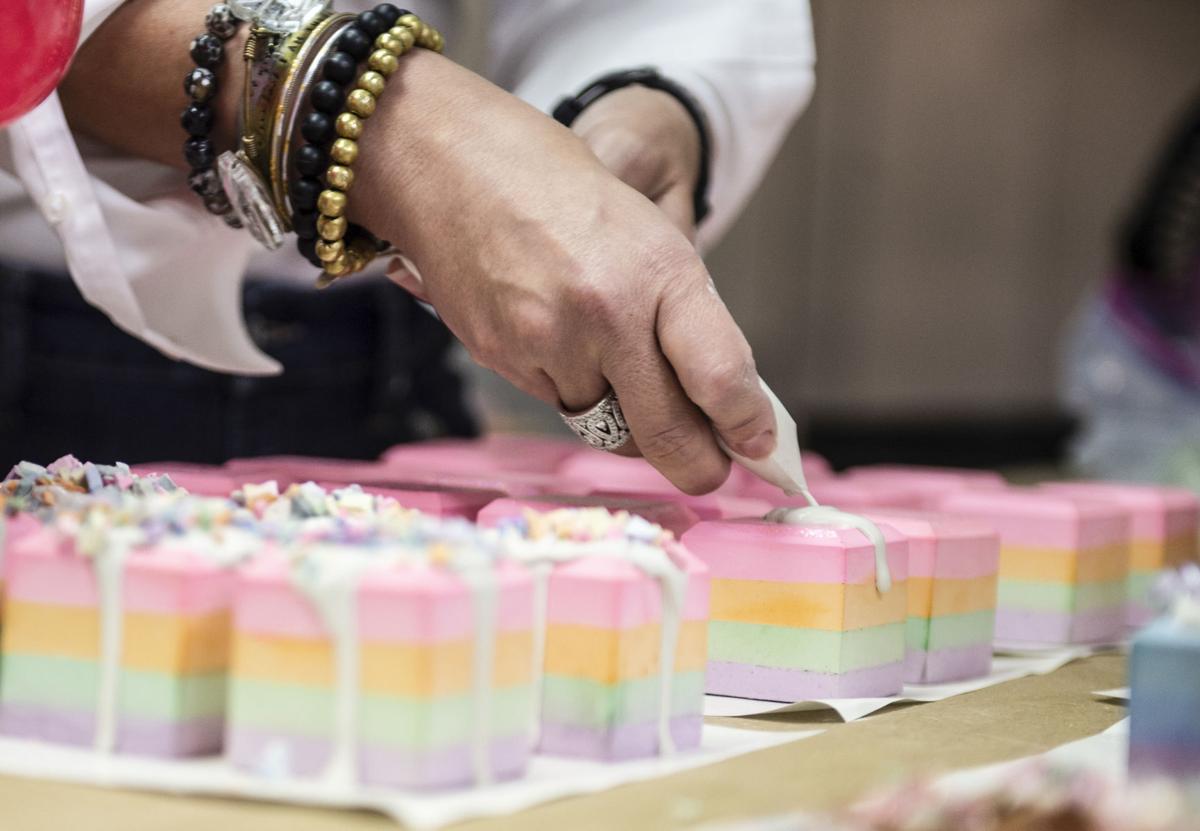 Two Decatur women mixed secret ingredients with pigment and water to create a few messes and their own line of sidewalk chalk that's helped offset the coronavirus pandemic's impact on their regular businesses.

Ashley Ashwander and Lindsey Faulkner launched their Hopscotch chalk brand in mid-April, when small businesses were struggling to keep operating and children were stuck at home looking for quarantine-friendly activities.

“We make every bit of it from scratch, right here in Decatur,” Ashwander said.

With the help of three part-time employees, Ashwander and Faulkner handle each stage of their process — from mixing ingredients to packaging — at The Albany, an event venue in downtown Decatur that Ashwander owns.

They said initially, making chalk was a messy process that left them covered in glitter, “chalk icing” that decorates their product and chalk ingredients in every color of the rainbow.

“In the beginning we had ingredients everywhere, packaging peanuts everywhere, trying to do everything in one space,” Ashwander said. “We’ve gotten much cleaner and neater.

"In the beginning we wore aprons and created a mess each time that we made chalk. We got smarter because obviously we and a few other ladies are the ones cleaning it up every time.”

In addition to Ashwander's event venue, she and Faulkner both own retail stores in downtown Decatur. The pair moved their retail businesses from Bank Street to Second Avenue Southeast about a year ago, and now operate out of a shared retail space. Ashwander, an event planner, owns The Paper Chase, and Faulkner, an interior designer, owns Old River Interiors.

Ashwander said loyal customers combined with pickup and delivery options enabled the pair to continue making sales at their original businesses even when the state's Stay at Home order was first issued in late March. However, COVID-19 concerns and statewide restrictions on group events brought The Albany’s business to a halt this spring.

“We had an open space to do something, and needed some way to hopefully make money,” Ashwander said.

Ashwander and Faulkner decided to use the empty space in The Albany to launch Hopscotch. Faulkner said the duo had a list of business ideas, but eventually settled on the sidewalk chalk line.

“You couldn’t get chalk anywhere. It sold out on all the websites, and it was $40 a box on Amazon for the Crayola sidewalk chalk, so we decided that there was an opportunity there,” Faulkner said.

Faulkner said Hopscotch took off so quickly that initially, orders were being shipped out as quickly as they were being made. Now, the pair has been able to stockpile their inventory as their business has expanded.

Faulkner said Hopscotch chalk is produced in three separate areas within The Albany, including the kitchen.

“Children really gravitate toward it, and that’s been our goal all along,” Ashwander said. “We want it to be pretty and neat and different, but at the same time still be a useful product that they enjoy.”

Like any sidewalk chalk, Hopscotch products can be used to create sidewalk art or, as the name suggests, play outdoor games like hopscotch — but Hopscotch hardly resembles typical sidewalk chalk available at major retailers.

The colorful chalk comes in a variety of shapes, including rainbow blocks, pencils, initials and building toys. The washable chalk is scented with the brand’s signature “Tutti Frutti” scent and is decorated with biodegradable glitter, the “chalk icing” and sprinkles.

Hopscotch chalk comes in a variety of chalk sets, including a “Back To School” chalk set and a “Brick Chalk Set.” One product is “chalk blasts” consisting of colorful layers of chalk that create rainbow patterns when dragged across a sidewalk.

“The neat part is how we’ve evolved, and how we developed together. We really build off each other,” Ashwander said.

The pair plans to release new products in the coming months, including seasonal chalk for Halloween, Christmas and other holidays. The holiday-themed chalk will feature new winter and cinnamon apple scents.

Hopscotch chalk products, which range in price from $9 to $12, are available for purchase at The Paper Chase and Old River Interiors, and online at livelovehopscotch.com. Ashwander and Faulkner also sell their products wholesale to businesses in Alabama, Georgia, Florida, Kentucky, North Carolina, Louisiana and Michigan, and plan to expand their wholesale distribution in the coming months.

This needs a pictue of the resultant sidewalk art.