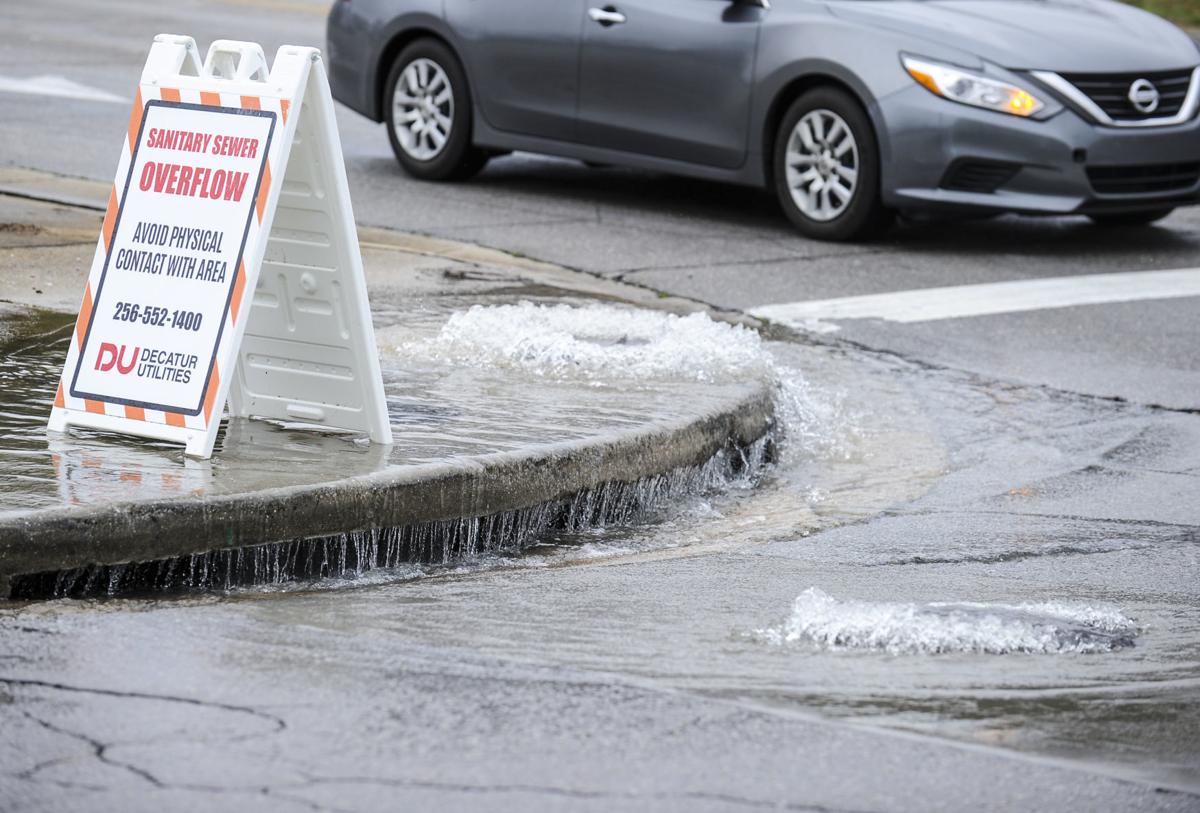 Untreated sewage overflows Tuesday from two manholes, one on the sidewalk of Central Parkway, left, and the other on Second Street Southwest. [JERONIMO NISA/DECATUR DAILY] 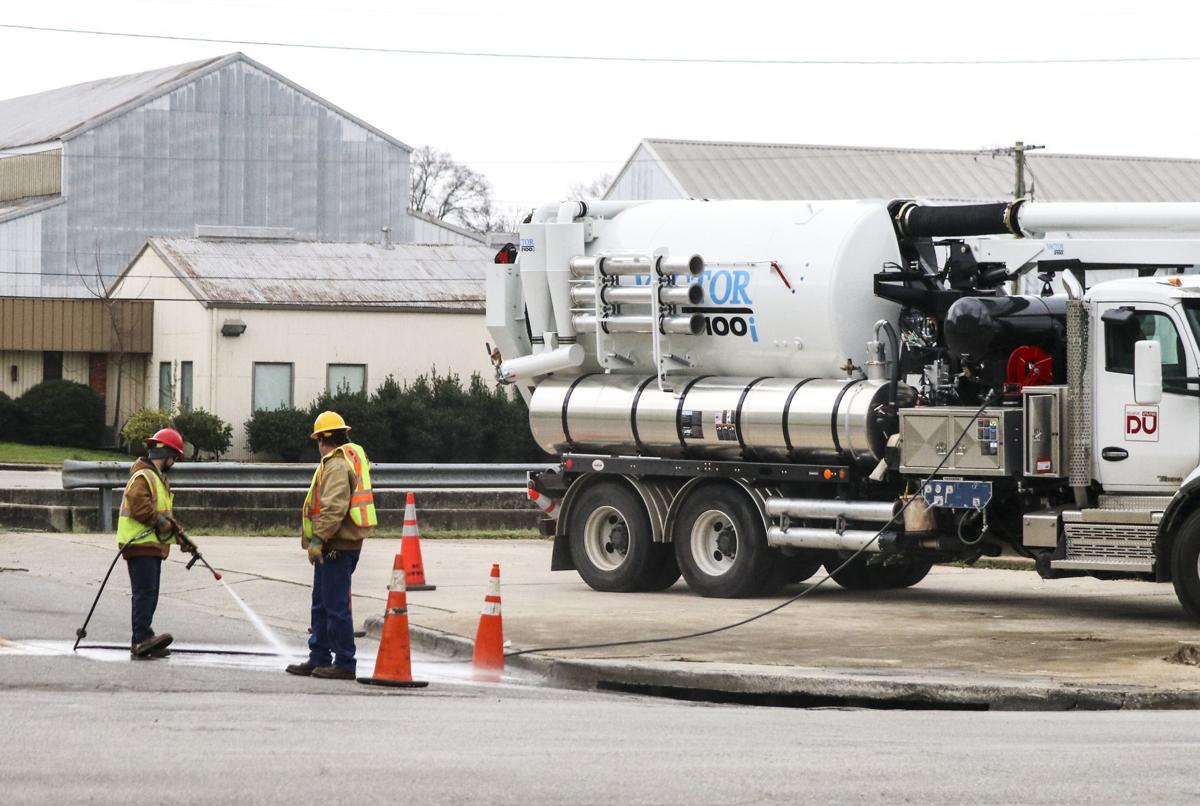 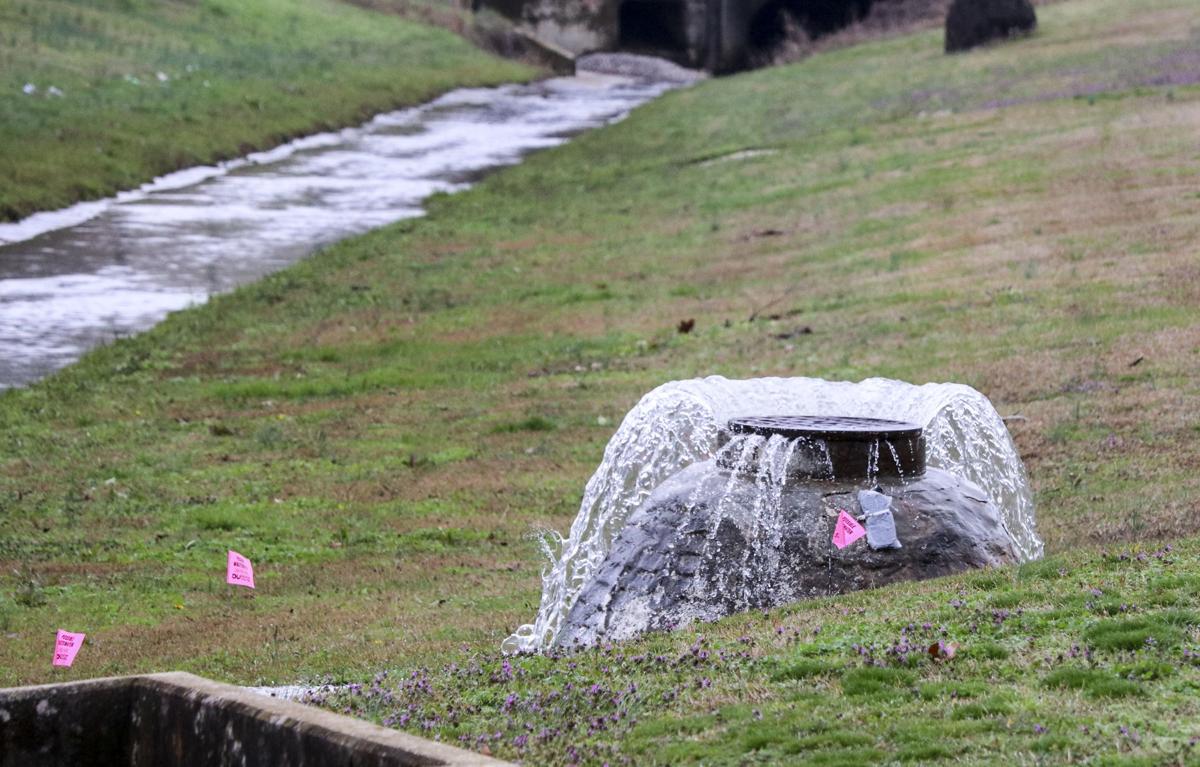 Untreated sewage escapes from a Decatur Utilities manhole Tuesday on Central Parkway Southwest into a drainage ditch leading to Dry Branch Creek, one of 25 overflows that were ongoing citywide Tuesday. [ERIC FLEISCHAUER/DECATUR DAILY]

Untreated sewage overflows Tuesday from two manholes, one on the sidewalk of Central Parkway, left, and the other on Second Street Southwest. [JERONIMO NISA/DECATUR DAILY]

Untreated sewage escapes from a Decatur Utilities manhole Tuesday on Central Parkway Southwest into a drainage ditch leading to Dry Branch Creek, one of 25 overflows that were ongoing citywide Tuesday. [ERIC FLEISCHAUER/DECATUR DAILY]

Decatur Utilities barely had time to report the discharge of millions of gallons of untreated sewage from last week’s overflows before more sewer overflows began Monday and Tuesday.

According to mandatory filings with the Alabama Department of Environmental Management, 4,839,270 gallons of sewage escaped DU sewer pipes from Thursday to Saturday, most ending up in Dry Branch Creek.

“I’m sensing a lack of urgency. I guess I want to see someone at DU running around like their hair’s on fire trying to resolve this,” Councilman Billy Jackson, whose district includes most of Dry Branch Creek, said Tuesday.

DU officials say they are replacing defective pipe aggressively, and may do more depending on the results of an ongoing $425,000 evaluation of the sewer system being conducted by Barge Design Solutions Inc.

“Sewer infrastructure replacement included in the current budget year work plan is continuing, as is the sewer system engineering study,” said Ray Hardin, DU’s general manager. “As stated earlier, any adjustments to the current plan will be based upon the recommendations of that study when it is completed mid-year.”

“We’ve got these contaminants coming into our community while they wait on a study,” Jackson said. “Maybe the study will answer everything, but I want to see some urgency. This is a serious problem.”

Sanitary sewer systems are designed not only to keep sewage in but to keep rainwater out. DU’s aging system, much of it clay pipe installed a half century ago, is failing in that role. Heavy rains cause water to enter the sewer pipes, mixing with the sewage and exceeding the pipe’s capacity. The result, as could be seen again Tuesday, is diluted sewage gushing from manholes.

It’s a toxic problem. Sherri Davidson, the state epidemiologist with the Alabama Department of Public Health, said last month the overflows contain bacteria, viruses and intestinal parasites like hookworms. Exposure can be direct, through contact with the sewage, or indirect if the sewage is tracked into a home on a shoe or by a pet.

According to the U.S. Environmental Protection Agency, sewer overflows cause health problems ranging in severity from stomach cramps and diarrhea to life-threatening ailments such as cholera, dysentery, infectious hepatitis and severe gastroenteritis.

Dry Branch Creek, the recipient of most of the sewer overflows, passes through residential areas of Northwest Decatur, alongside Leon Sheffield Magnet School and into Wheeler Reservoir near Ingalls Harbor. On Tuesday, numerous overflows were visible along Central Parkway Southwest. Most of those overflows also end up in Dry Branch Creek.

DU places warning placards next to the overflowing manholes and triggers robotic phone calls to those who live in the immediate area of the overflow.

“Once the (sanitary sewer overflow) stops, the affected area is disinfected and then, where applicable, the area is thoroughly rinsed with potable water,” said DU spokesman Joe Holmes.

In a section of the ADEM forms asking what corrective action is being taken, DU typically responded: “The affected area was marked with a sign, cleaned of debris, and disinfected by DU field personnel. DU is continuing rehabilitation efforts to the sewer collection system to eliminate inflow and infiltration and to prevent future overflows.”

Jackson said he and his constituents are increasingly frustrated.

“The frustration is it seems as if it’s a never-ending story. This is something where DU should be coming to the council as a body and saying, ‘This is the problem, this is our remedy and this will be the outcome.’ It’s very frustrating that we’re not getting adequate information on how we’re going to ultimately resolve this,” Jackson said.

The largest reported overflow last week was 3,166,095 gallons from a manhole near 1108 Sixth Ave. S.W. The receiving waterway was identified by DU as Dry Branch Creek.

Other reported overflows last week, and the creeks that received them:

The current situation and cause of SOS overflows have been known for years without resolution or proper management to address the need and requirement of a top grade, health compliant, and environmental friendly process to prevent Sanitary Sewer Overflows. With millions of gallons of raw sewage running through our neighborhoods and into our streams, how does any "branding effort" convenience anyone to live in our fair city.