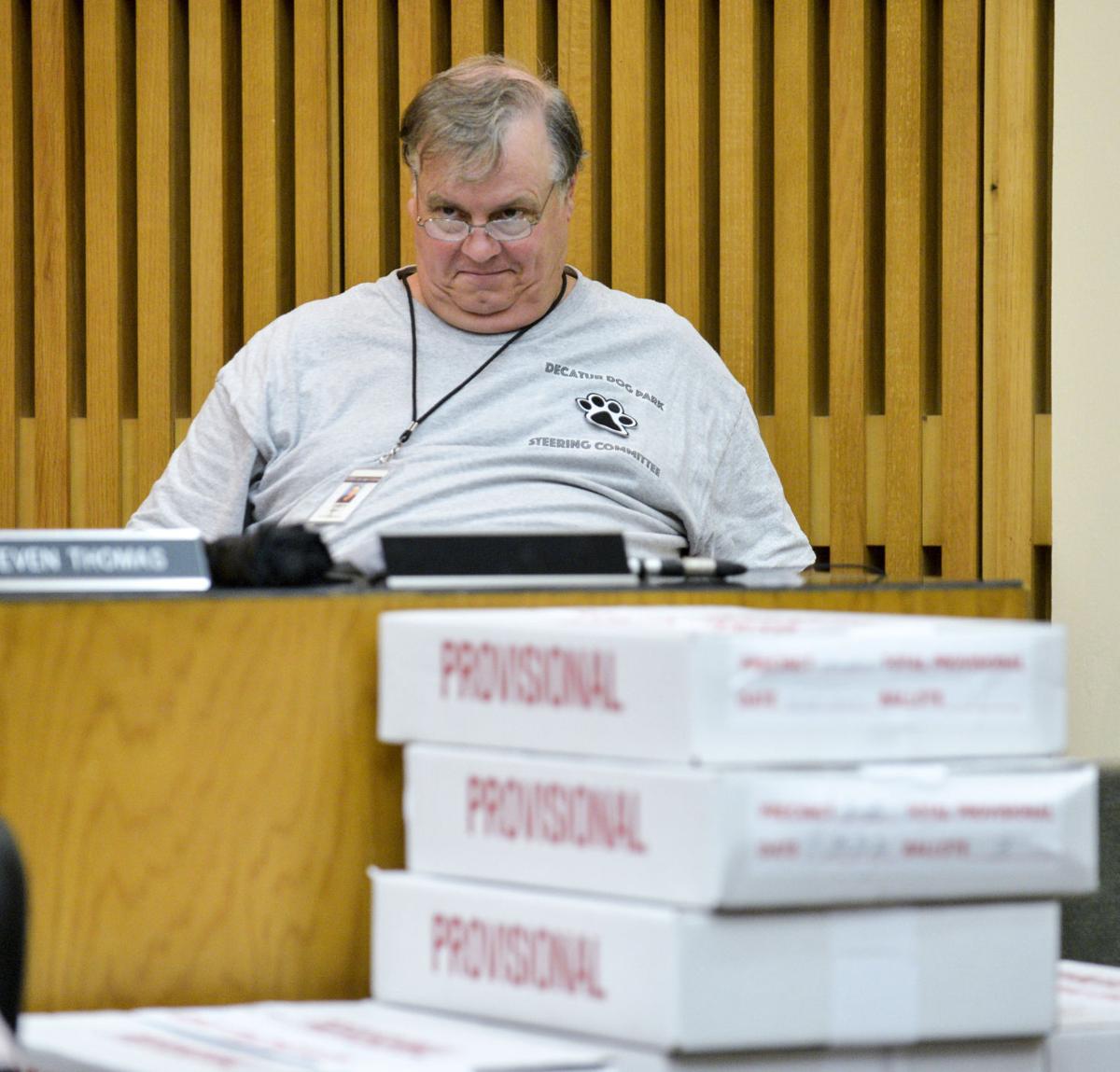 Decatur City Council member Charles Kirby looks on as provisional ballots are counted during a final vote canvassing at the council chamber on Tuesday. Kirby, who lost last week's election to 18-year-old Hunter Pepper, recused himself from voting on the election results because he said he has a complaint pending against Pepper. [JERONIMO NISA/DECATUR DAILY] 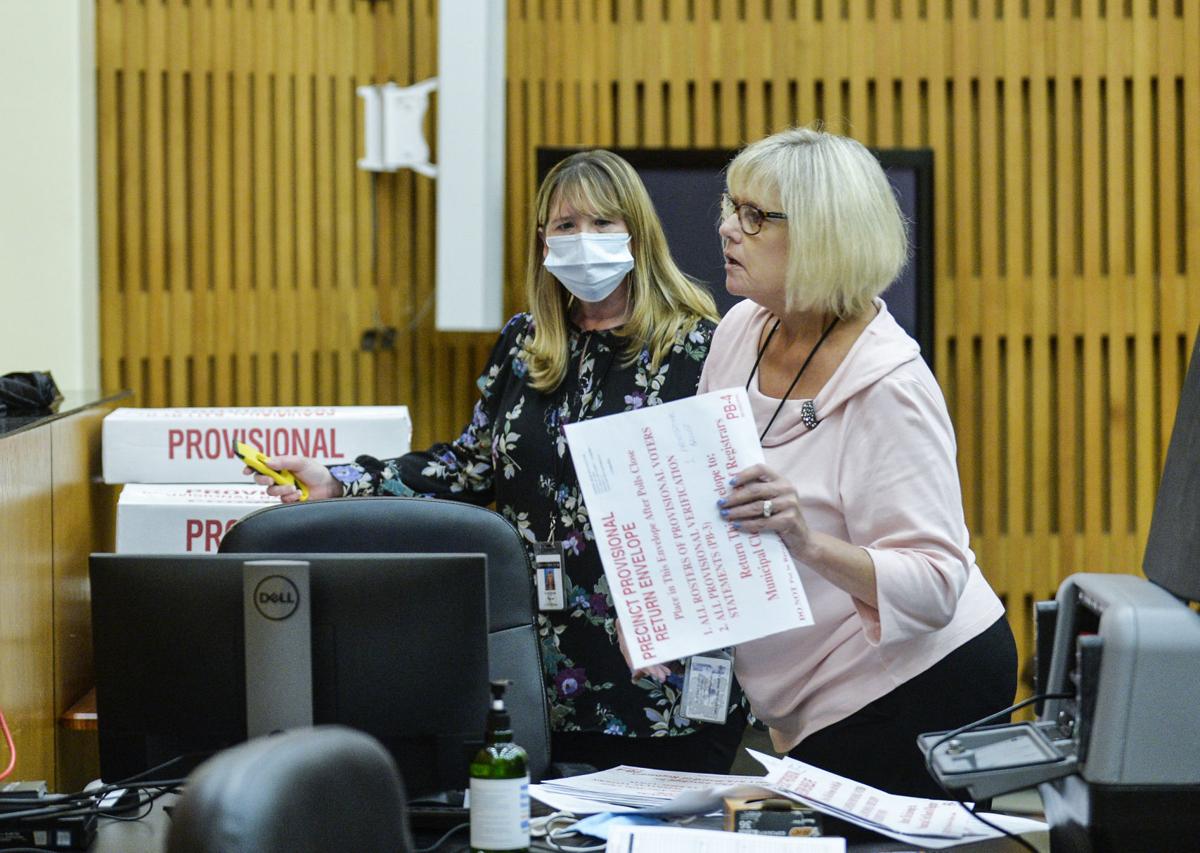 Decatur City Council member Charles Kirby looks on as provisional ballots are counted during a final vote canvassing at the council chamber on Tuesday. Kirby, who lost last week's election to 18-year-old Hunter Pepper, recused himself from voting on the election results because he said he has a complaint pending against Pepper. [JERONIMO NISA/DECATUR DAILY]

Decatur’s 2020 municipal election became official Tuesday but not until after two outgoing council members recused themselves from the canvassing vote because they filed complaints with the state.

The Aug. 25 election had four newcomers win to join unopposed District 1 incumbent Billy Jackson on the City Council. Kyle Pike won District 2, Carlton McMasters took District 3, Hunter Pepper was the District 4 victor and Jacob Ladner is the District 5 winner — all without a runoff.

District 4 incumbent Charles Kirby said he recused himself because he filed a complaint with the Secretary of State's Office against 18-year-old Pepper. Initially, Kirby’s complaint accused Pepper of not reporting his campaign expenses, and Pepper said last week he had "done all the paperwork I need to do at the county."

Pepper disclosed no cash or in-kind contributions or expenditures in his filings with the Morgan County Probate Court, which is allowable under state law if he received or spent less than $1,000 in his campaign.

However, Kirby on Tuesday said he amended the complaint after talking to Secretary of State John Merrill on Sunday night. He would not say what the amendment said, and he declined to provide a copy of either document. Merrill could not be reached for comment Tuesday.

Pepper on Tuesday declined to comment on Kirby’s complaint.

Council President Paige Bibbee recused herself from presiding over the vote canvassing and handed the gavel to President Pro Tem Chuck Ard.

Bibbee said her attorney advised her to recuse herself because she filed an ethics complaint July 31 against attorney Barney Lovelace and the Decatur-Morgan County Chamber of Commerce that accuses them of “election tampering.”

Bibbee said she couldn’t release her complaint because the Ethics Commission is investigating it, but she did say it’s about a January email Lovelace sent to attorneys in his firm, Harris, Caddell & Shanks, detailing a meeting with chamber President and CEO John Seymour and the then-chamber board chairman.

She said the Ethics Commission requested a clarification in an Aug. 12 letter to her.

The Jan. 15 email by Lovelace described a discussion about the election and the need to find good candidates. He prefaced the email by saying its contents should not be shared "for obvious reasons — we represent the City in the PFAS litigation and other governmental entities."

Bibbee said the email insinuates that Lovelace wanted to find opponents for Bibbee and Kirby, an accusation Lovelace denied in July.

"It has also been discussed about someone (or more) running against Paige Bibbee (District 3) and Charles Kirby (District 4)," Lovelace wrote. "If you wonder why, especially about Paige, come see me and we will discuss."

In the January email, Lovelace said he had told chamber officials he "could not be publicly involved in this effort, but very deep behind the scenes I would help as needed."

Bibbee said Tuesday she forwarded the Lovelace email, The Decatur Daily’s July 26 story on the email, a YouTube video of Bowling’s angry statements during a May council meeting and a copy of an 82-minute recorded phone call between her and Lovelace to the commission.

In a Tuesday email to Lovelace that he forwarded to The Daily, Cynthia Propst Raulston, state Ethics Commission general counsel, wrote in response to a conversation she had Tuesday with Lovelace:

“You have asked whether you would be considered a public employee or a public official and the answer is that you would not because you are not employed, but retained. Even if you were employed to provide those professional services, which you are not, that income does not make up 50 percent of your income.”

In another Tuesday email to The Daily, Lovelace wrote that Bibbee knows he isn’t subject to Alabama ethics law because it only applies to public officials and employees.

“I am no longer willing to allow Ms. Bibbee to use the media to smear my reputation with unfounded and wild claims,” Lovelace wrote. “I am not a public official and likewise I am not an employee of the city or the Industrial Development Board. I simply represent them as a lawyer.”

Lovelace wrote that it’s clear that Bibbee is blaming “someone other than herself for her resounding defeat in the recent election. Ms. Bibbee is once again lashing out at me for no reason other than continuing to attack my character and integrity.

“I found it incredible the day after the election when Ms. Bibbee told the media that almost 80% of the people in her district voted against her because of me. I think Ms. Bibbee should accept personal responsibility for her actions over the past four years which resulted in the rejection of her by the voters in her own district.”

Bibbee said it’s important to note she sent the complaint in July so people know that it’s not about her losing in the election.

“I’m not fighting the results,” Bibbee said. “This is not sour grapes. I was already pursuing this complaint before the election.”

Lovelace wrote that Bibbee’s accusations stem from him telling her that, in his legal opinion, she has a conflict of interest in environmental lawsuits because of her close personal relationship with the former president of Tennessee Riverkeeper, one of the plaintiffs in a lawsuit against the city, Decatur Utilities, 3M and others.

Bibbee has criticized Lovelace over his representation and pushed for more public disclosures of information relating to the per- and polyfluoroalkyl substances (PFAS) at issue in the lawsuits, information Lovelace said could not be released due to ongoing mediation. They argued when she refused to sign a confidentiality agreement.

Seymour said Tuesday he wasn’t aware of the Bibbee ethics complaint so he could not comment on it.

Both are sore losers. They all needed to be gone with the exception of Billy Jackson. The citizens voted them out, smart move, hopefully with this new council Decatur can move forward.

McMasters raised $14,130, easily the most of any council candidate. Bibbee raised $1,900. The hard worked paid off for McMasters.

LOSERS! Bibbiee and Kirby don't want to accept responsibility for their actions. Neither of them worked as hard as any of their opponents to get re-elected. Accept the loss and move on. This is more good advertising for the city of Decatur to bring in new residents.The residents of your districts made it clear in this election that they want someone else representing them on the city council. Congratulations to the winners.