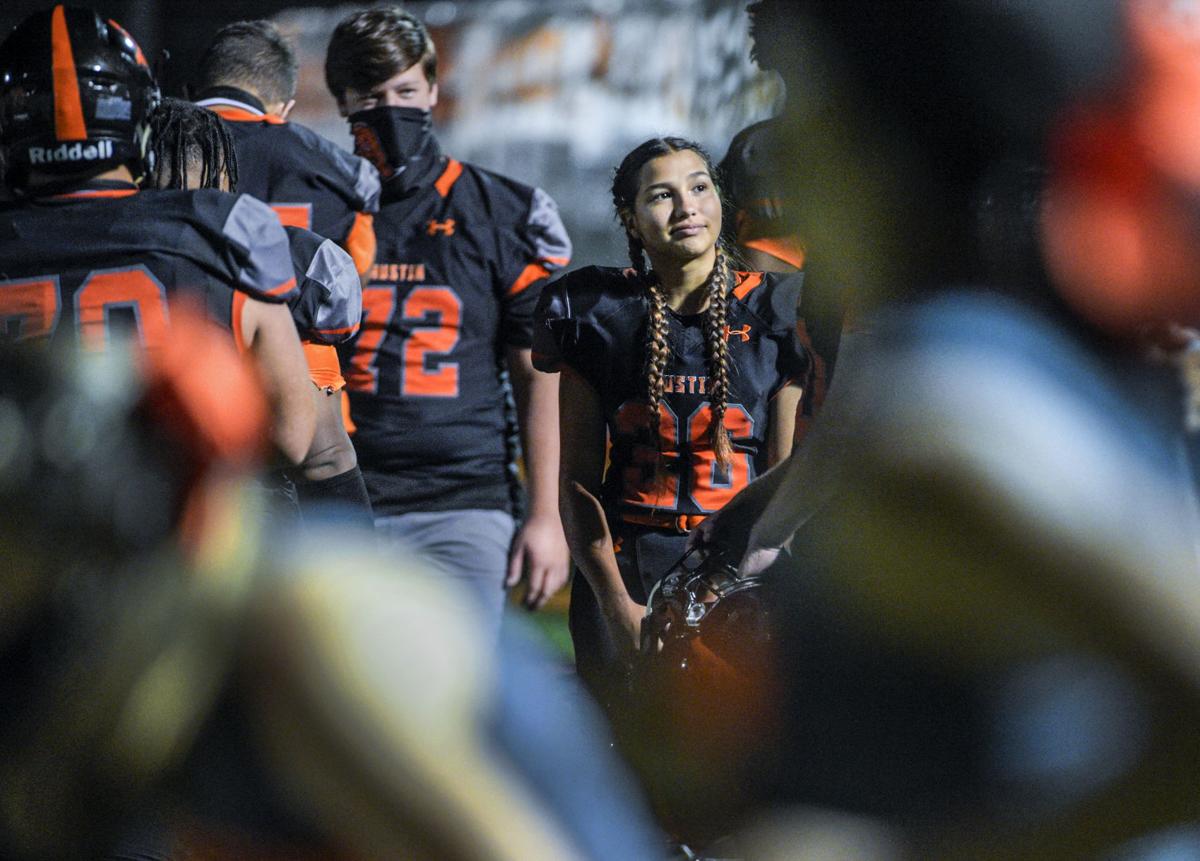 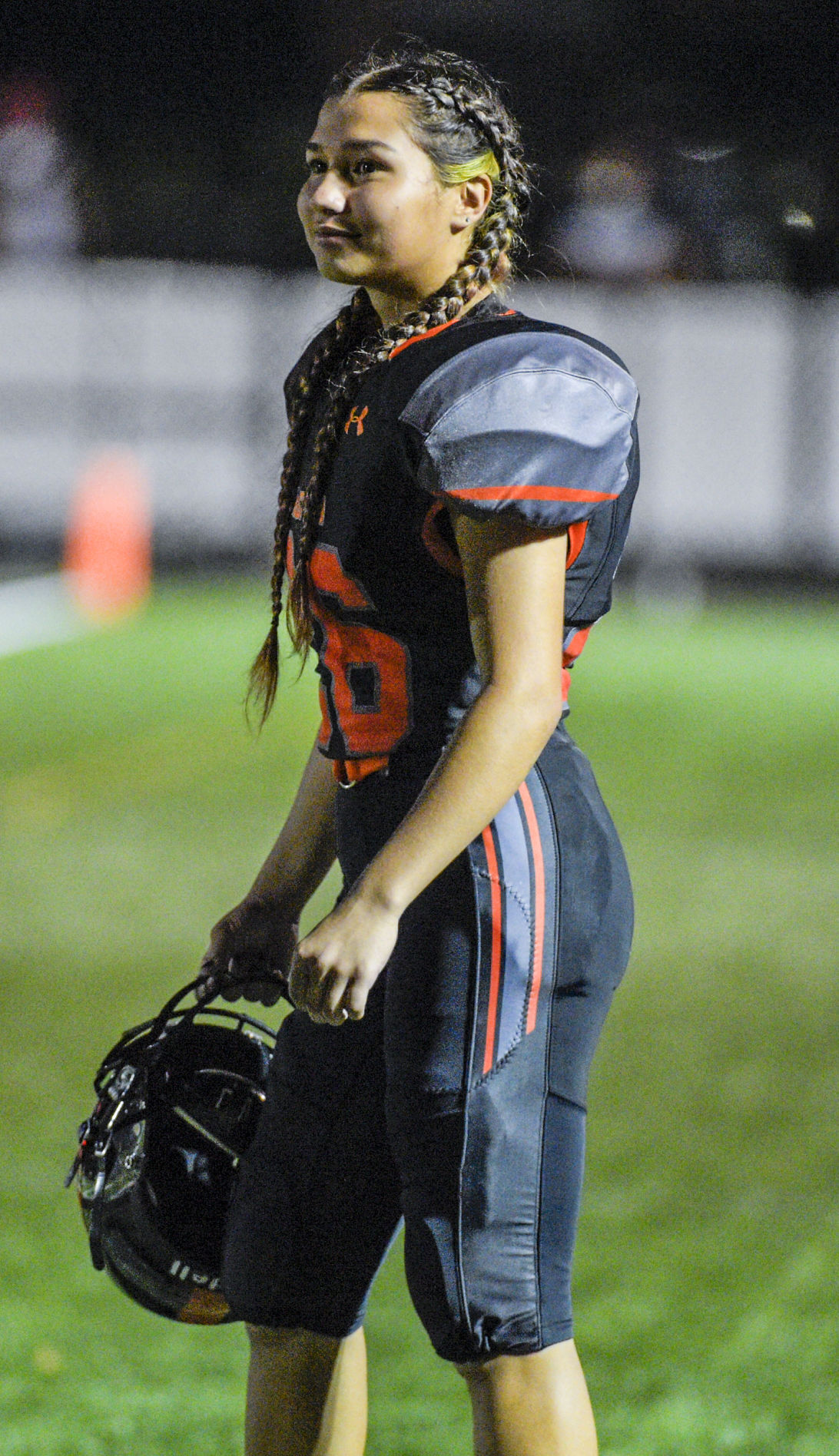 “I had people tell me I probably couldn’t do it. I was stunned by their reaction. Then I thought, ‘Well, watch me, I’m going to do it anyway,’” Natasha Frassati said. [JERONIMO NISA/DECATUR DAILY] 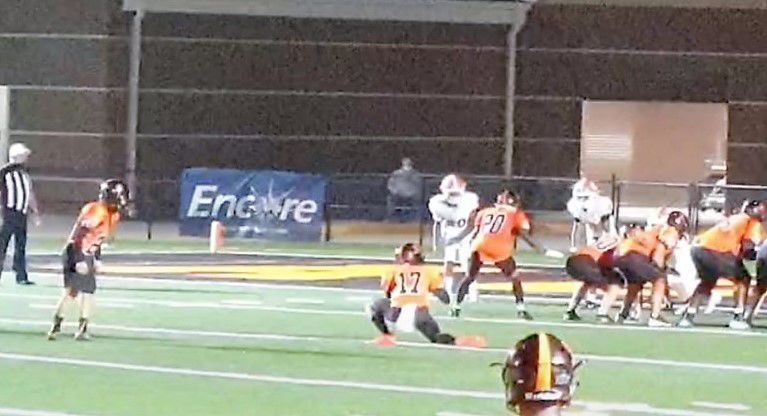 “I had people tell me I probably couldn’t do it. I was stunned by their reaction. Then I thought, ‘Well, watch me, I’m going to do it anyway,’” Natasha Frassati said. [JERONIMO NISA/DECATUR DAILY]

The announcement echoed through the Austin High Black Bears stadium: Johnson to hold, Palmer to snap, Frassati to kick.

Standing on the field beneath the stadium lights, Natasha Frassati, her braids dangling down to the “26” on her jersey, strode to the football propped on the turf and drilled the extra point through the uprights.

“When I heard them say my name on the loudspeaker, I was really excited and really nervous. When I made it, I was like, ‘Whew.’ It was a great feeling. I felt like I deserved to be there and I was contributing,” said the 16-year-old Frassati, who made her debut in an Austin High School varsity game during the River City rivalry against Decatur.

Frassati, the lone girl on the 85-member Austin High team, represents the growing number of females across the nation participating in high school football.

According to the National Federation of State High School Associations, 2,400 girls played on high school football teams last year. That’s the most ever recorded by the association and double the number of female football players at the high school level from 2010.

But, with more than 1 million high school students playing 11-person football, girls remain a rarity, making up only 0.2% of participants.

“I won’t lie, I was very scared in the beginning and had second thoughts about joining the team because there were no other girls. But all the guys have been great and very accepting,” Frassati said.

Frassati’s journey from the sidelines to the football field began two years ago and became an actuality this year. While holding pompoms and rooting on the players, Frassati, a member of the cheerleading squad, felt drawn to the game she grew up playing at home with her stepfather.

Now, she is one of the athletes being cheered on by fans.

“I loved seeing everyone play, how the crowd got into it and cheered for the team. And I just love the game. I wanted to be part of the team and part of the action, not just on the sidelines,” Frassati said.

For Frassati, who plays defense on the Lady Bears soccer team and competes on the track and field team in the hurdles and high jump, the addition of football to her pastimes felt natural.

“When I told my parents I wanted to play, my stepdad was all for it because we always played football together,” Frassati said. “My mom, she had some doubts, but she has been real supportive.”

Some of Frassati's peers questioned her decision.

“I had people tell me I probably couldn’t do it. I was stunned by their reaction. Then I thought, ‘Well, watch me, I’m going to do it anyway,’” said Frassati, who contacted Austin High head coach Jeremy Perkins in the summer about joining the team.

For Perkins, Frassati is his first female player. To ensure her commitment to the sport, Perkins met with Frassati and her stepfather before allowing her on the team.

“I’ve had some females jokingly talk about it before, but no one like Natasha. She was truly serious,” Perkins said. “I have been very impressed with her whole demeanor and the way she carries herself with no fear and no nonsense.”

Perkins decided to place Frassati in the role of kicker — despite her desire to play defense.

“I would love to be on defense and hit people. I am very aggressive. I didn’t want to be a kicker at first, but it is the best position because of my size. And I can kick pretty well because of playing soccer. Maybe next year I can hit people,” Frassati said.

While Perkins felt a hint of worry about how the team would receive Frassati, the players readily accepted their new teammate.

“We have a great group of guys and they have been really receptive,” Perkins said. “Of course, they wanted to see her kick first and see that she could actually play, but once they saw her kick, it was like she was just one of the guys.”

After scoring twice during the Decatur-Austin game, Frassati celebrated with her team. Frassati’s mother, Mabel Frassati-Burris, captured the moment on video.

“Come on baby,” Frassati-Burris whispered in the video posted on Twitter, erupting in cheers after her daughter’s kick split the uprights.

"I'm biting my nails every time," Frassati-Burris said of seeing the daughter she described as "fearless" and "smart" play. "We are very proud of her and everything she has accomplished so far."

Along with kicking backup on the varsity team, Frassati holds the duties of the main kicker on the Black Bears junior varsity team.

“I’ve had some teachers tell me that there are a lot of little girls that look up to me. I didn’t know that. That makes me feel really good that maybe I can give them confidence and show them that they can do anything,” Frassati said.

To other girls who dream of playing football, Frassati offered a message of encouragement, strength and motivation.

“Don’t be scared and don’t let anyone tell you no. You can do this,” Frassati said.