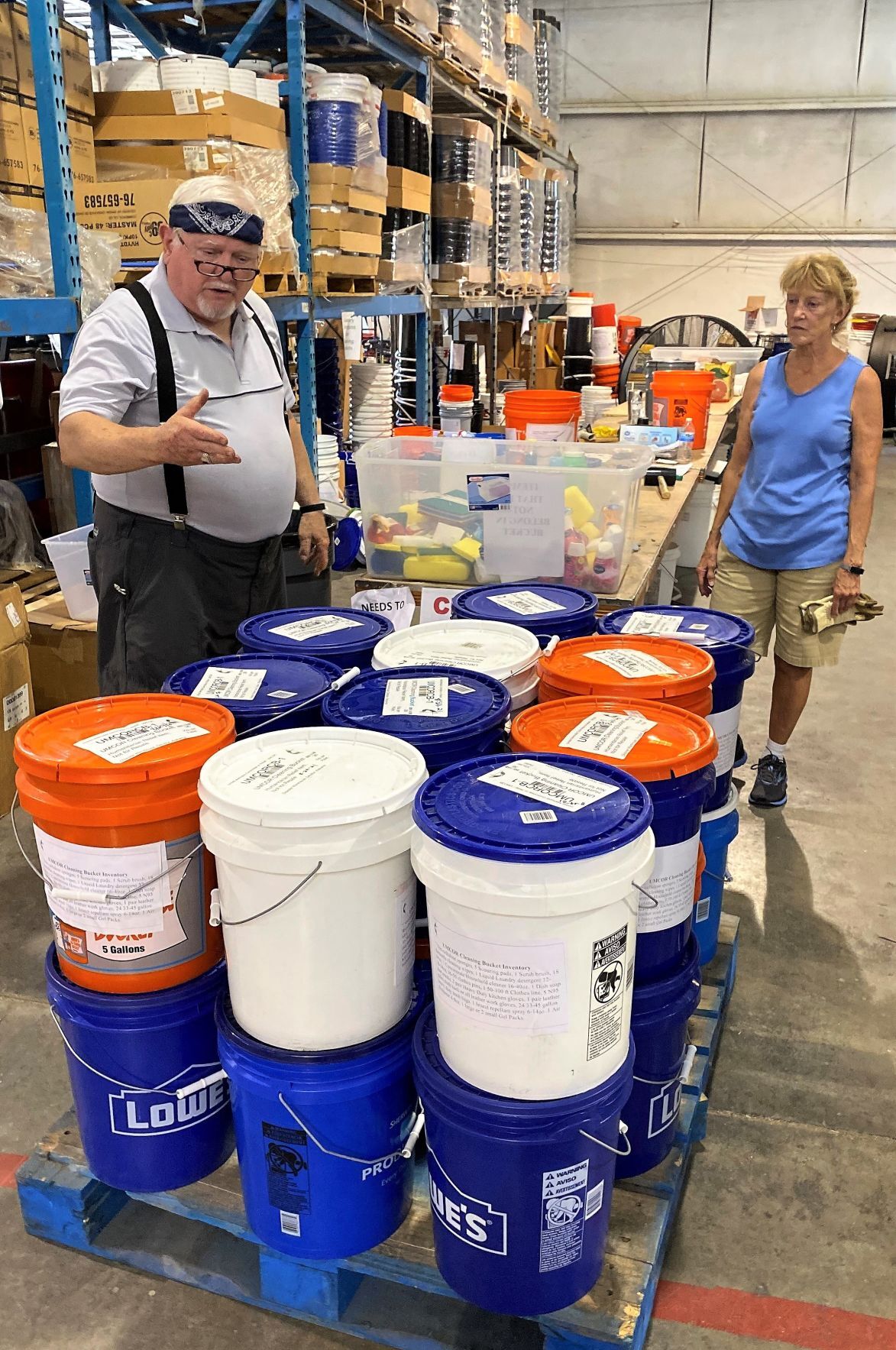 The Rev. Alan Benson and Louisa Melton check some of the cleaning buckets before they are shipped to flood victims in Waverly, Tenn. [MICHAEL WETZEL/DECATUR DAILY] 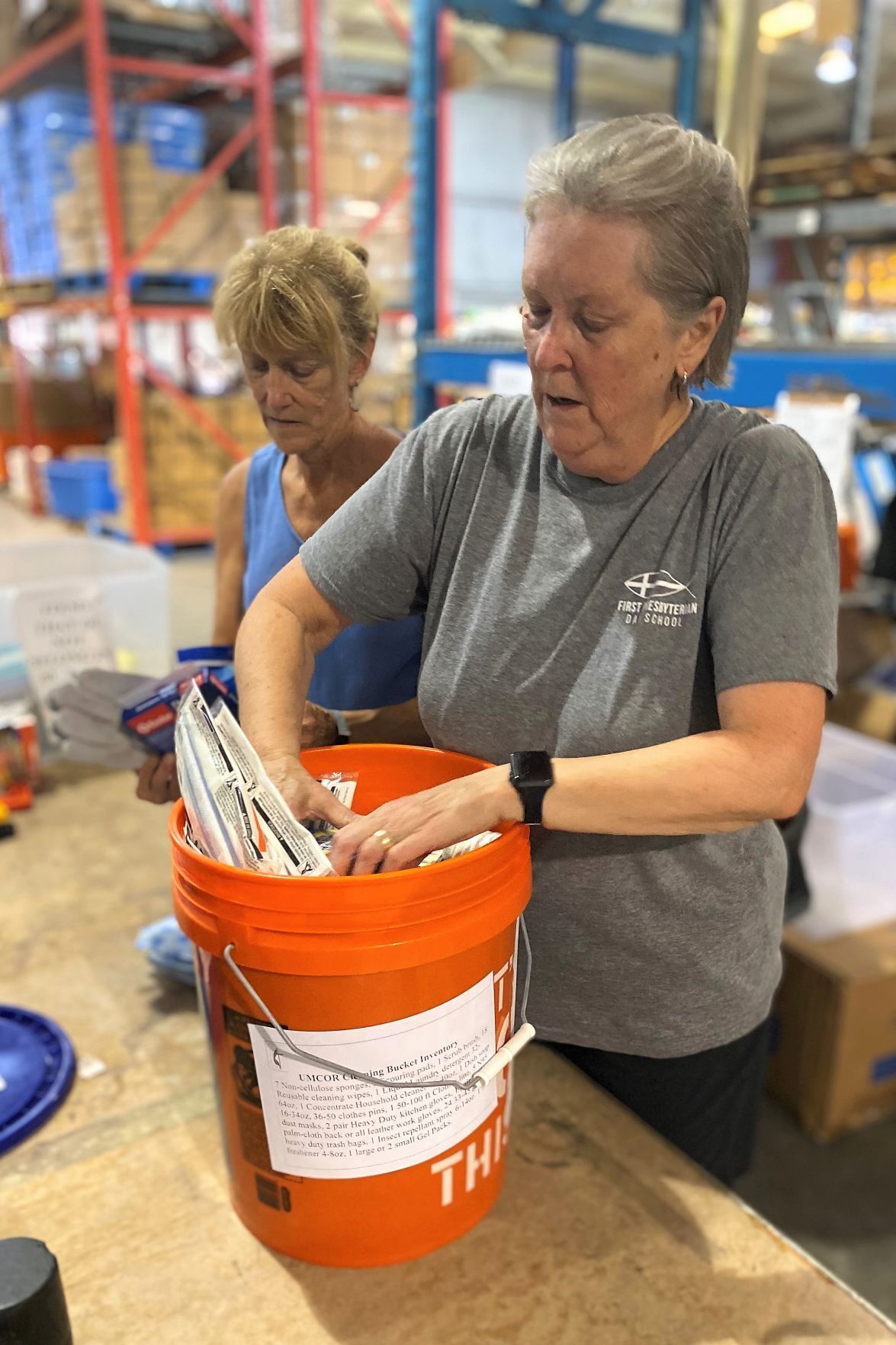 Louisa Melton, left, and Kit Benson pack cleaning buckets for delivery to Tennessee flooding victims at the United Methodist Disaster Relief Warehouse on U.S. 31 South in Decatur on Tuesday. They traveled with their husbands to Decatur from Griffin, Georgia, to volunteer. [MICHAEL WETZEL/DECATUR DAILY]

The Rev. Alan Benson and Louisa Melton check some of the cleaning buckets before they are shipped to flood victims in Waverly, Tenn. [MICHAEL WETZEL/DECATUR DAILY]

Louisa Melton, left, and Kit Benson pack cleaning buckets for delivery to Tennessee flooding victims at the United Methodist Disaster Relief Warehouse on U.S. 31 South in Decatur on Tuesday. They traveled with their husbands to Decatur from Griffin, Georgia, to volunteer. [MICHAEL WETZEL/DECATUR DAILY]

The United Methodist Disaster Relief Warehouse in Decatur is sending relief packages today to those impacted by deadly flooding in central Tennessee, and is seeking volunteers and donations for ongoing relief efforts.

More than 20 people have died, more remain missing and many are homeless after flash floods overwhelmed Waverly, Tennessee, over the weekend. The area received about 17 inches of rain in a 24-hour period, according to the National Weather Service.

“The list was designed by (the United Methodist Committee on Relief) and items are purchased through donated money or are brought by churches who gather the items and bring them here,” Sandlin said. “We see an uptick in volunteers and donations after an event like in Tennessee.”

Four of the five volunteers working at the warehouse along U.S. 31 South on Tuesday afternoon came from Griffin, Georgia.

“It’s a privilege to be here helping out,” said Quimby Melton, one of the Georgia volunteers. “We’re here to do whatever we can to help UMCOR. It’s a blessing to be here.” He said his group, which included his wife Louisa, and the retired Rev. Alan Benson and his wife Kit, will be in Decatur three days.

The volunteers are paying for their own housing and meals until they travel nearly five hours back home. The fifth volunteer on Tuesday was Charles Speaks of Priceville.

“It’s our fifth trip here,” Alan Benson said. “We planned on coming here before the flooding even occurred. Today, we’ve been verifying what’s in the buckets and helping fill more buckets.”

Kit Benson said they assist at the warehouse about three times a year.

“It’s more exciting when we know these buckets are going to a disaster immediately,” she said.

Some of the buckets leaving today were packaged between January and August, Sandlin said.

“We always need inventory packaged and ready to go,” she said. “Of 11 affiliated (UMCOR) warehouses in the United States, we’re the closest warehouse to Waverly. We’ll need volunteers but we’re taking precautions to have one group (of about 10 people) at a time working. In the early spring through July, we were using about 20 volunteers at a time, but with the increase in COVID cases we have lowered it.”

She said volunteers are needed Tuesdays through Fridays from 9 a.m. to 3 p.m. The warehouse is open to volunteers 12 months a year, Sandlin said.

Since the summer of 2018, when Hurricane Florence hit North Carolina, the ministry has responded to 30 natural disasters.

“Our prayer is that we can reach people and tell them about Jesus. In the worst time of their life, to give them some of the best news that you can, that’s pretty awesome. If I can take a chainsaw and teach somebody about Jesus, I’ll do that all day long,” said Cody Michael, co-director of Project Unify.

Monetary donations for supplies and shipping costs, send a check to: