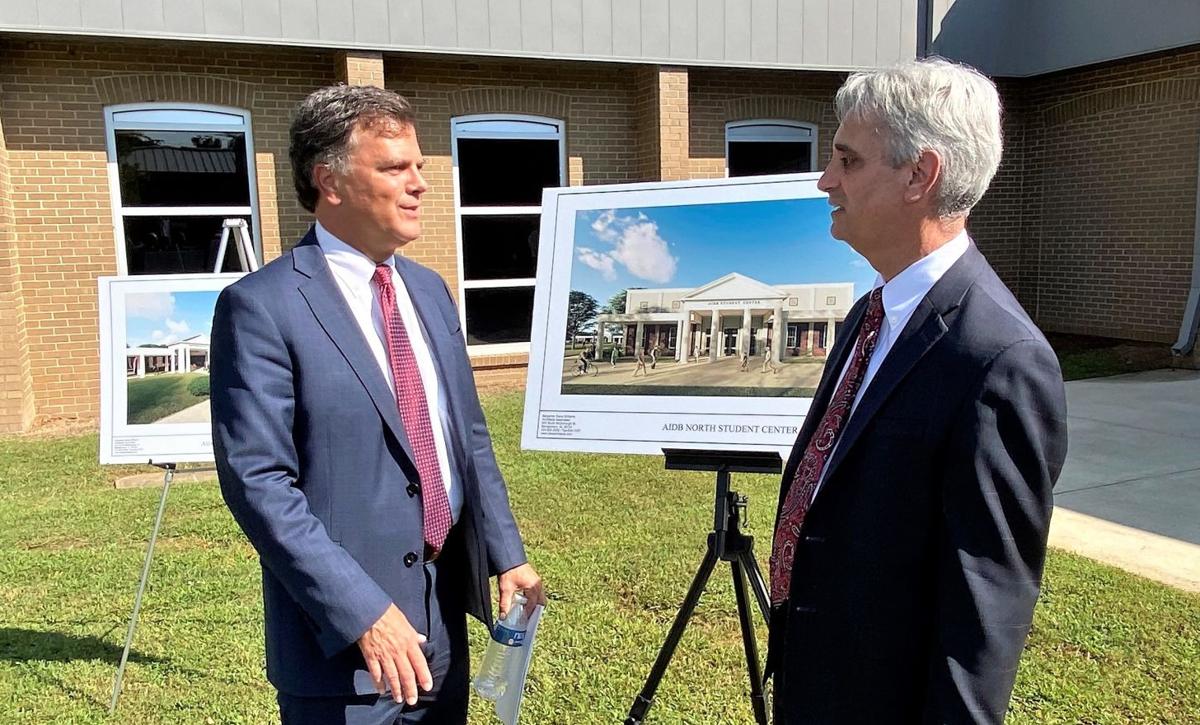 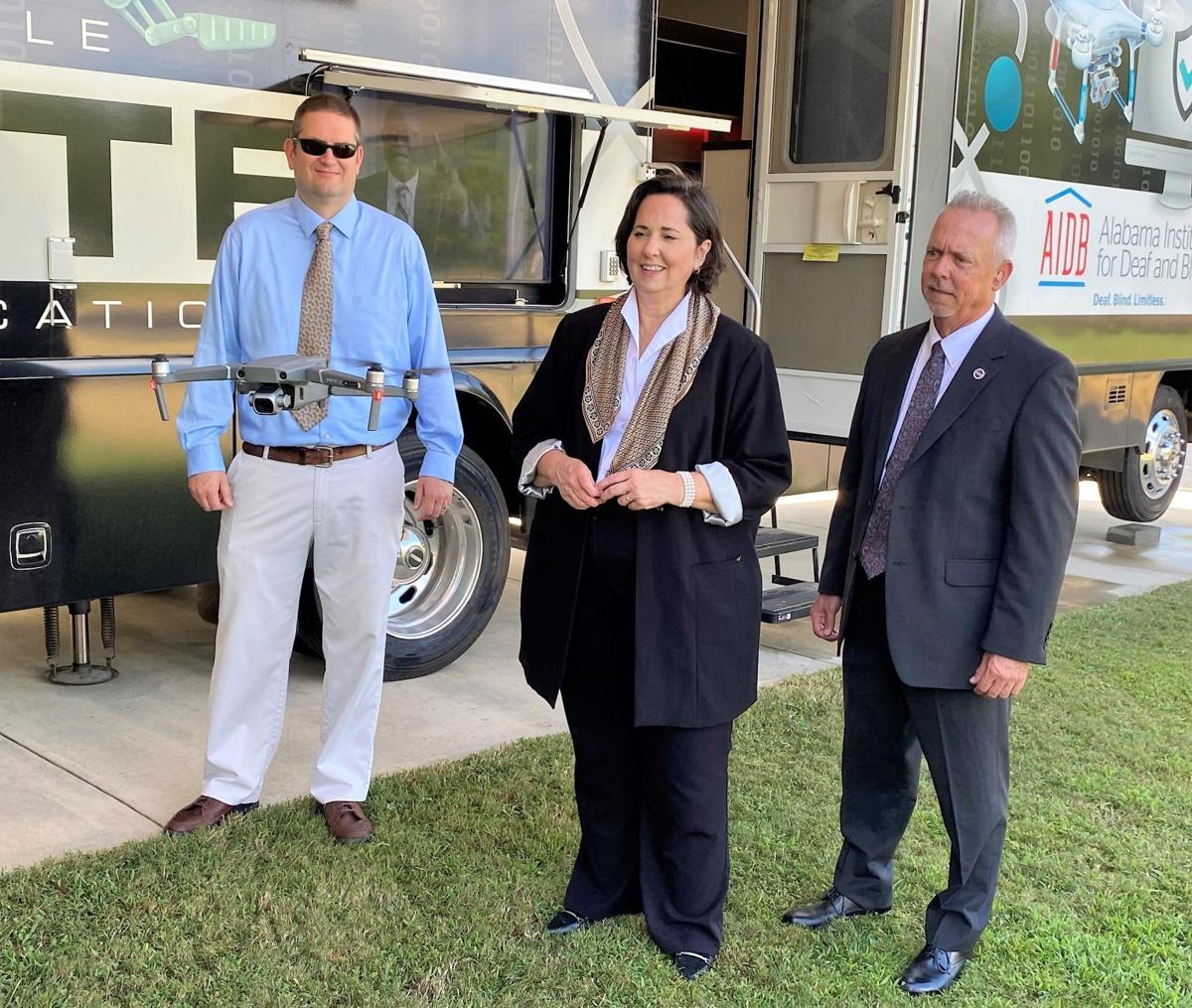 From left, Jason Roop, director of NTID Regional STEM Center, Frances Taylor, chair of the AIDB board of trustees and Chip Dobbs III, board member, get a close look at a flying drone on Wednesday morning. [MICHAEL WETZEL/DECATUR DAILY] 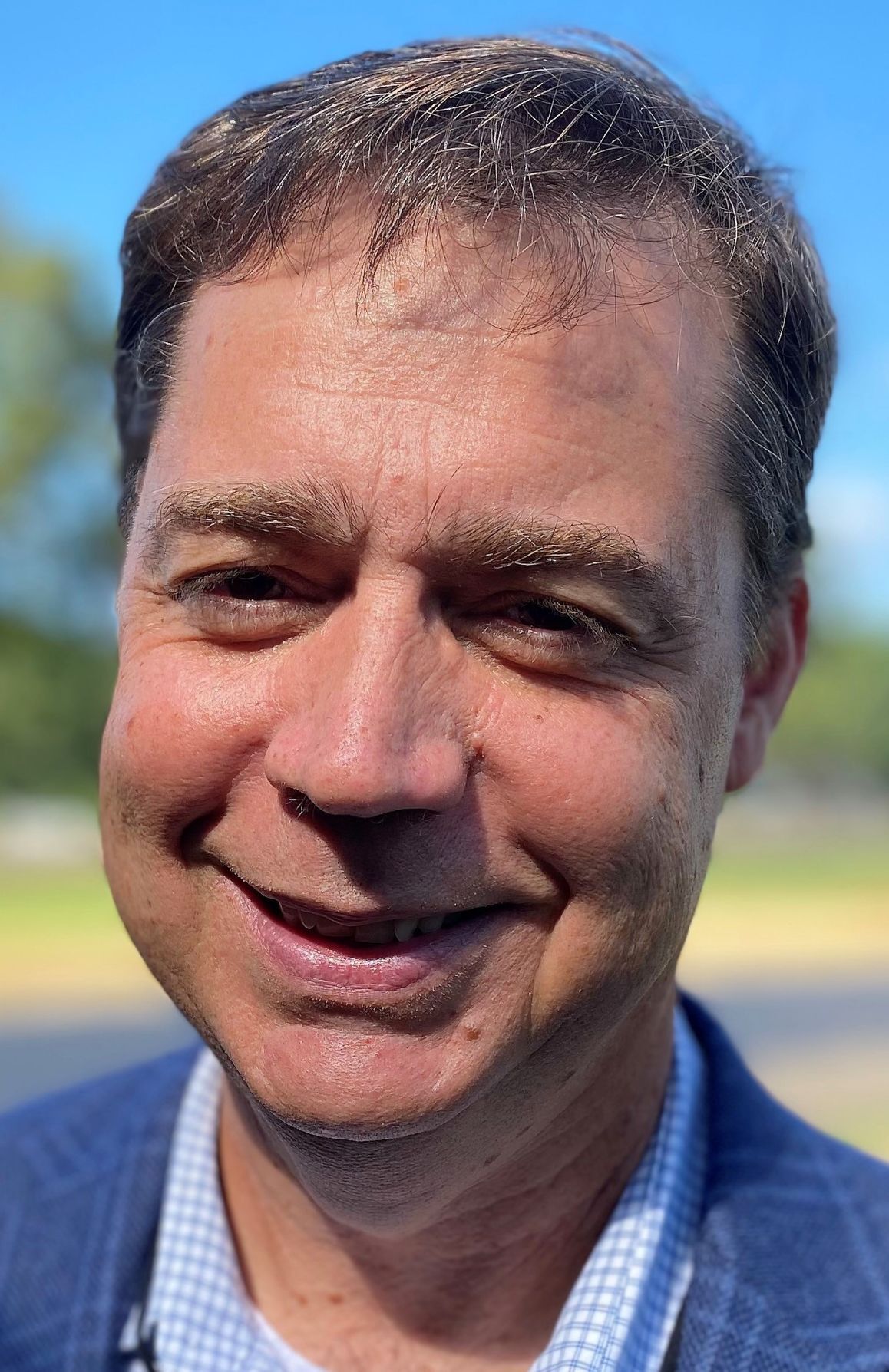 From left, Jason Roop, director of NTID Regional STEM Center, Frances Taylor, chair of the AIDB board of trustees and Chip Dobbs III, board member, get a close look at a flying drone on Wednesday morning. [MICHAEL WETZEL/DECATUR DAILY]

The 200-acre former Wallace Center property along U.S. 31 South will be transformed over the next two years to serve about 1,000 deaf and blind individuals annually and have more than 75 students living onsite, according to officials with the Alabama Institute for Deaf and Blind.

Officials provided details on plans for creating AIDB North during a news conference Wednesday. AIDB President John Mascia said he envisions AIDB North with about 25 to 50 employees with salaries from $30,000 to about $60,000 annually and state benefits within a couple of years. The campus will provide services to the community as well as educational programs.

Plans are for AIDB North to offer programs through the Decatur Regional Center, Alabama Freedom Center for the Blind, the National Technology Institute for the Deaf and Gallaudet University Regional Center. Mascia said educators in adult rehabilitation for deaf and blind individuals, social workers, internet technology teachers, people with computer backgrounds and maintenance workers are needed.

“We’ll begin to hire in the next six months, and we’ll hire more as we grow,” he said. “Not all of the students will be living on campus. We’ll offer day programs where the students can be living at home. We’ll have groups of people come in and summer camps here.”

He said the Decatur Regional Center will offer services for infants through adults, mainly in Morgan, Limestone, Lawrence and Cullman counties.

“Services are starting right away,” he said. “We estimate there are between 60,000 and 70,000 people in the area who have some hearing or vision loss.”

“We have a collaboration with Gallaudet University and we want to partner with local school systems, too,” Mascia said.

Gallaudet is a private liberal arts university in Washington, D.C., for the deaf and hard of hearing. Gallaudet also has regional centers in Massachusetts, Texas and California.

AIDB North will offer three fast-growing STEM programs — in mechatronic engineering, robotics and cybersecurity — and provide the Southeast STEM Academy for students who have hearing issues.

“The addition of programs that embrace new technologies and strategic partnerships will change the future of our students and consumers for generations,” said Decatur native Frances Taylor, chair of the AIDB board of trustees. “The most exciting, and certainly impactful changes, are the new programs that allow students to build a future that integrates the latest technology into their educational foundation, preparing them to be leaders in the community after graduation.”

The Lurleen B. Wallace Center was the state Department of Mental Health’s first regional developmental center. It opened in 1971 and the center’s last 40 patients were discharged when it closed in 2003. The National Guard announced it would locate a training facility on the property in 2015 but those plans later changed.

Orr said in an effort to find a new use for the property, he visited the Talladega-based ADIB in May 2020 with the idea of allowing the deaf and blind institute to improve and use the dilapidated facility.

“It’s been neglected,” Orr said. “I got tired of driving by and seeing the weeds."

He said AIDB staff initially visited the center in 2020 and saw it was in “very rough shape," but they were receptive to his proposal.

“Transformative moments in this business are rare,” Mascia said. “We’re excited to be here.”

Orr said, the National Guard "put about $7 million into the place and when they had a change of leadership and went in a different direction that allowed the property to become available. We’re grateful the state Armory Commission voted to convey the property to AIDB at no cost.”

He went on to sponsor a bill that funneled $28 million to the AIDB North project. Orr said vandals had damaged some of the structures at the center and stolen copper wire out of the buildings, but architects indicated the "bones" of the facility were usable.

Mascia said one of the existing buildings on the property has been demolished, and another two will be razed in coming months.

“We got the deed to the property last week, but the National Guard allowed us to start some of the work about six weeks ago,” Mascia said.

Dennis Gilliam, executive director for special programs for AIDB North, said renovations on all other buildings will take place with advertising for contracting bids within 30 days.

“Eleven buildings will be re-roofed and some buildings will need hazard material abatement,” he said. The former cafeteria will be demolished and rebuilt into the gym, student center and new cafeteria. It could be late 2023 before that becomes a reality, Gilliam said. “Landscape and lighting will be added to make it pedestrian friendly,” he said.

Orr said the Legislature has about $50 million of annual appropriations for AIDB, plus additional federal funds. “Some of that money will be spent right here. The economic impact will be considerable.”

Karla Smith, executive director of field services for the Decatur Regional Center, said a woman stopped by the center Monday afternoon asking for services for her 44-year-old blind son so he can live independently.

Decatur’s Terrance Robinson, who is blind and working on his third master’s degree, and Amber Whitehead of Athens, who is a deaf stay-at-home mom with four children, told the gathering Wednesday morning they are glad the center and services are closer to their homes.

Should the City Council approve Decatur Morgan Hospital’s application to operate an ambulance service in Decatur?