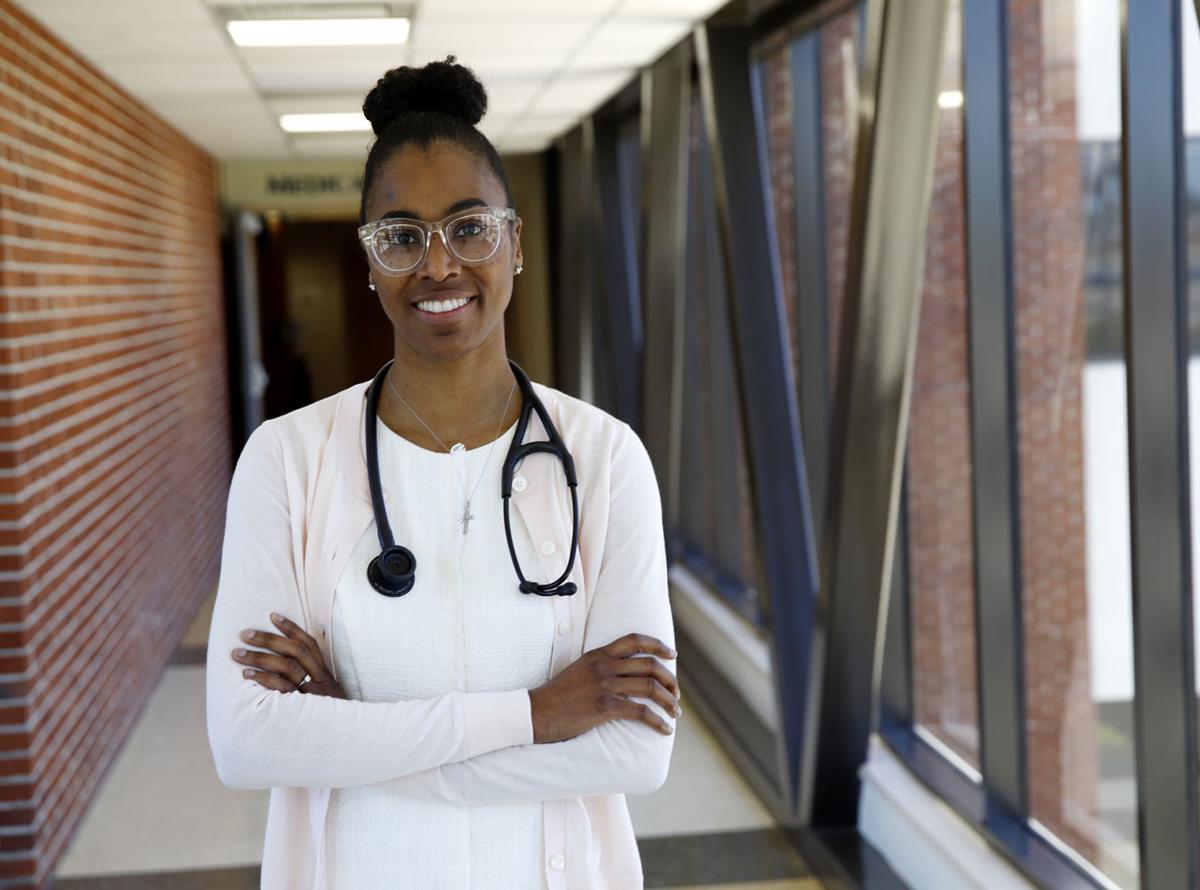 Dr. Mishanta Reyes grew up in New York City but was attracted Decatur because it is "a caring community." [DEANGELO MCDANIEL/DECATUR DAILY] 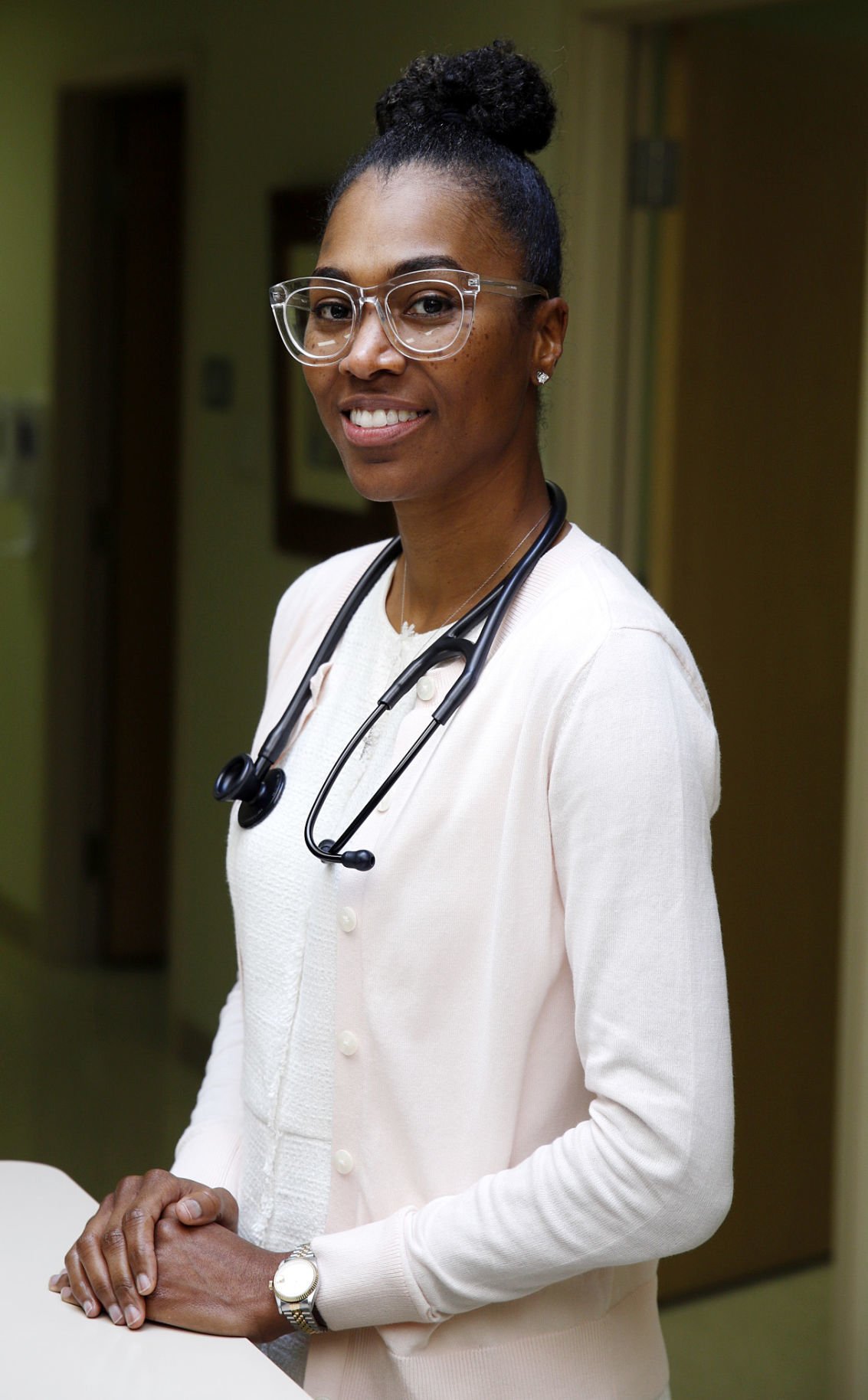 Dr. Mishanta Reyes earned a degree in mechanical engineering from Georgia Tech in 2003, returned to New York and “fell into teaching” while preparing to attend medical school. [DEANGELO MCDANIEL/DECATUR DAILY]

Dr. Mishanta Reyes grew up in New York City but was attracted Decatur because it is "a caring community." [DEANGELO MCDANIEL/DECATUR DAILY]

Dr. Mishanta Reyes earned a degree in mechanical engineering from Georgia Tech in 2003, returned to New York and “fell into teaching” while preparing to attend medical school. [DEANGELO MCDANIEL/DECATUR DAILY]

Dr. Mishanta Reyes has been asked the question more than she expected, and her answer is always the same.

“A lot of my patients ask me why I’m in Decatur,” she said with a big smile while in her second-floor office at Decatur Morgan Women’s Healthcare, where she's a part of the team of doctors providing obstetrics and gynecological services at Decatur Morgan Hospital.

Reyes, 39, who grew up in New York City, said she came to Decatur because of her desire to treat patients and provide care in a family-oriented community.

“Medicine has always been part of me because I equated being a doctor with helping people,” Reyes said. “Decatur is a caring community, and I’m fortunate to be part of this city.”

The hospital started building the Decatur Morgan Women’s Healthcare team after doctors with OB-GYN Associates gave notice in October 2018 that they would no longer deliver babies coming through the emergency room at Decatur Morgan Hospital.

Dr. Thomas Ray, medical director for women’s services at Decatur Morgan Women’s Healthcare, was charged with building the team and the first OB-GYN he hired was G. Vernon Pegram, who has been practicing in Decatur for a little more than a decade.

“You could tell she was a special doctor and she gave highly qualified answers to every question,” Pegram said. “She could go other places, but I’m glad she’s here and part of the team at Decatur Morgan.”

Reyes' journey to Decatur started when her parents moved to California from Belize, a tiny, poor country south of Mexico on the eastern side of Central America. Opportunities for her parents were limited there.

The youngest of three children said her parents decided to “pick up everything” when she was 1 and move the family from San Francisco to New York.

Reyes was zoned for Truman High, a 9-12 school with about 2,000 students in the Bronx. Her mother, however, opted to enroll Reyes in a The Spence School — a private, all-girls, K-12 school in Manhattan .

“I had 40 in my graduating class,” Reyes said, while pointing to a framed class picture in her office.

She said there was never any doubt she was going to college, and for as long as she can remember she wanted to be a doctor “so I could help people.”

Reyes participated in track and field in high school and enrolled in the University of Virginia hoping she would get a full scholarship offer in the sport. When this didn’t happen, she transferred to Georgia Tech and was on a track scholarship four years. She used to hold Georgia Tech's record in the long jump, and her jump of 20 feet, 6.5 inches in 2002 still ranks as one of the school's top outdoor performances.

She earned a degree in mechanical engineering from Georgia Tech in 2003, returned to New York and “fell into teaching” while preparing to attend medical school.

Reyes said she met some friends who were in the teaching fellow program and they encouraged her to do so. She was a math teacher two years at Truman High while enrolled in the pre-medical program at City College of New York.

She left teaching when she entered medical school in 2007 and was in her third year of residency when her father’s unexpected death changed her path in medicine.

Reyes had been preparing to do her OB-GYN rotation when her father died, but the medical school gave her time off.

She had thought she knew her career path. “I planned to do something in the psychiatric field,” she said.

But after she returned to medical training following her father’s death, Reyes said she had “an amazing mentor” and that experience “completely changed my mindset” about obstetrics and gynecological care.

Reyes was working in Albany, Georgia, and contemplating a move to Texas when a doctor friend from New York, who was working in north Alabama, suggested she look at Decatur.

“I drove down and I was pleasantly surprised at what Decatur had to offer,” she said, noting “Decatur’s caring spirit and family-like atmosphere.”

Reyes started working for the Huntsville Hospital System — of which Decatur Morgan Hospital is an affiliate — in March 2018 and transferred to what is now Decatur Morgan Women’s Healthcare when doctors with OB-GYN Associates stopped delivering babies in the emergency room.

Debbie Watson, who has worked in labor and delivery for 26 years at the hospital, said she was surprised to learn that Reyes was from New York because she appears to display Southern hospitality.

“She’s an asset to this community and hospital and is very well respected,” Watson said.

Reyes said she earned an engineering degree because she wasn’t sure she would ever get into medical school and wanted to be in a position to take care of herself. She said she has learned that engineering and medicine are related, because there are generally no multiple choice answers.

“You have to understand what you are doing,” Reyes said.

Dr. Pegram said Reyes understands her profession, but also has a big heart for people, which “translates to compassionate care.”

Reyes said there are no typical days, but Decatur has been everything she expected and more. She said medical care in the community is dealing with a perception issue because people don’t realize the “quality of care and compassion” available to them.