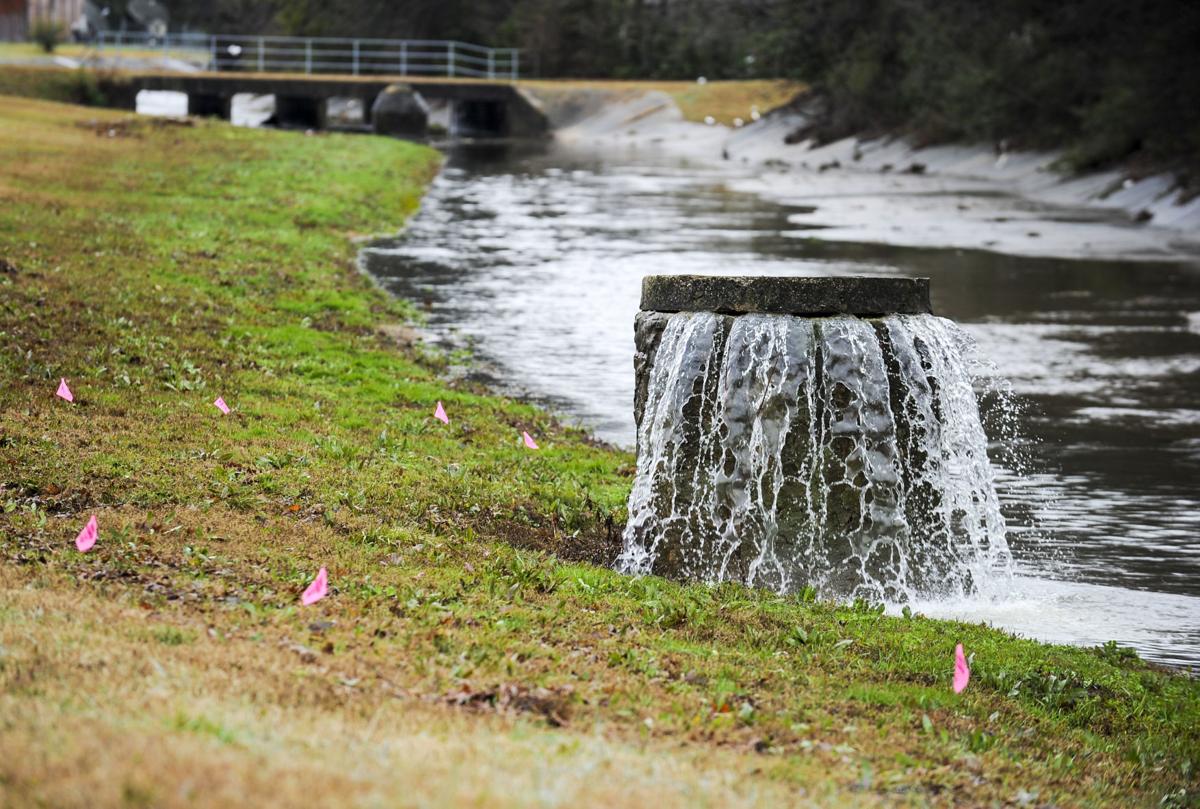 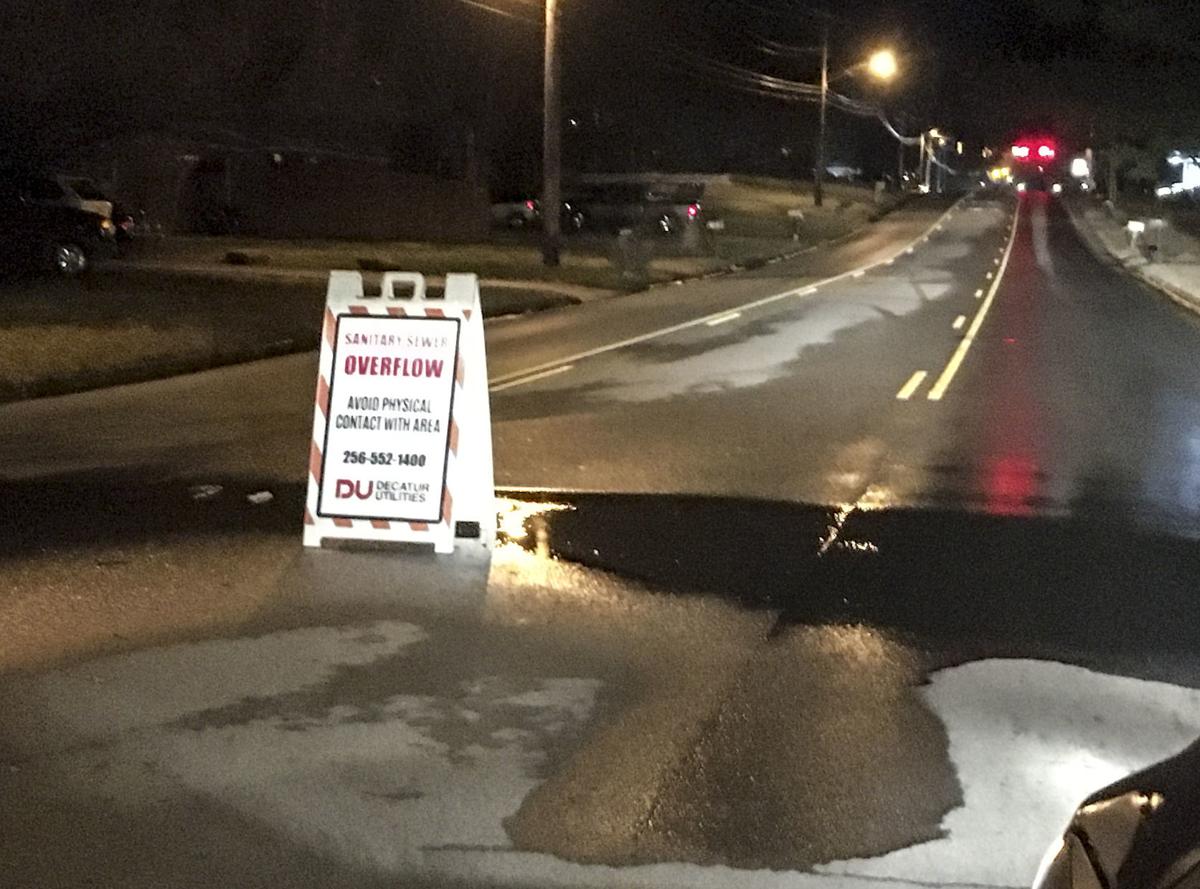 In the space of two rainy days last week, 810,075 gallons of untreated sewage gushed from Decatur Utilities manholes into ditches, creeks and streets, and eventually to the Tennessee River, according to documents filed by the city-owned utility.

“More needs to be done. We don’t need this type of news coming out of our city, or our residents living with that,” Mayor Tab Bowling said Friday.

In the last 12 months, according to disclosures filed with the Alabama Department of Environmental Management, up to 7.94 million gallons of raw sewage have escaped the DU sanitary sewer system in 81 overflows.

The largest discharge last week came Dec. 22, when DU estimated 486,000 gallons of sewage began pouring from a manhole at 2102 Central Parkway S.W., near DU’s headquarters. In the more than 40 hours it took for DU to stop that overflow, 23,400 gallons of sewage poured onto First St. S.W., 51,795 gallons discharged from Wimberly Drive Southwest manholes, 70,005 gallons discharged onto Brindwood Lane Southeast, 25,215 gallons ended up on Sixth Avenue Southwest, and another manhole on Central Parkway added 130,350 gallons to the discharged sewage total.

Most of the 12 overflows last week were received in Bakers Creek, according to DU, with Flint Creek also receiving tens of thousands of gallons.

Athens Utilities, however, reported no sanitary sewer overflows last week. Huntsville Utilities, with almost four times the sewer mileage of DU, reported four overflows totaling 6,000 gallons. Inflow from construction areas, not rain, was listed as the cause of each. Neither Moulton Utilities nor West Morgan-East Lawrence Water and Sewer Authority reported any overflows.

According to the U.S. Environmental Protection Agency, sewer overflows contain bacteria, viruses, parasitic organisms, intestinal worms and molds. “As a result, they may cause diseases ranging in severity from mild gastroenteritis (causing stomach cramps and diarrhea) to life-threatening ailments such as cholera, dysentery, infectious hepatitis, and severe gastroenteritis,” according to an EPA advisory.

DU officials did not respond last week to questions about the overflows because, according to spokesman Joe Holmes, they were out for the holidays. Earlier this month, DU Water Resources Manager Tom Cleveland said he suspects DU reports more overflows than other utilities because its crews are proactive in looking for them, rather than waiting for complaints from residents.

He said heavy rains infiltrate old pipes in the system, causing most overflows.

Cleveland said DU is working to reduce the number of overflows, with a concerted effort beginning in February 2013 when it adopted a 10-year wastewater system improvement plan. Since then, it has replaced six sanitary sewer lift stations. In fiscal 2018, according to its most recent annual report, DU replaced 4.4 miles of sewer main. DU inspected 23.4 miles of pipe in fiscal 2018, according to its annual report. Cleveland said the utility has invested $60 million over the last 10 years in improving its wastewater system infrastructure.

City Council President Paige Bibbee said the combination of topography and old sewer pipe are a challenge for DU.

"Every year they're replacing more pipe, and I applaud their efforts on that. It takes time, but that will help," she said.

Bowling said he wants DU to communicate a proposal for improvement.

“I need to talk with DU and find out what they plan to do about it,” he said. “Really DU runs on its own, but I’m the mayor of the city and I need to find out how they will address this.”

Cleveland said replacing sewer lines is expensive and the cost ultimately would be borne by DU ratepayers. Holmes this month said DU has the lowest combined bills in the state when water, sewer, electric and gas are factored in.

“We’re proud of that, to have an excellent system and low rates,” he said earlier this month.

DU is a defendant in a lawsuit filed in May by the state Attorney General’s Office and ADEM that claims DU is liable to the state for up to $25,000 per overflow, and it lists hundreds of overflow violations going back to 2014. The complaint also alleges the overflows have contributed to high E. coli levels in water discharged into the Tennessee River.

In October, the nonprofit Tennessee Riverkeeper joined the lawsuit as an additional plaintiff.

David Whiteside, director of the organization and a Decatur resident, said the sanitary sewer overflows are unacceptable, and that keeping rates low is a poor justification for failing to quickly upgrade the infrastructure.

“Our existing taxpayer dollars ought to be supporting basic services such as treating our city’s waste,” Whiteside said. “That’s typical of Decatur politicians, to say the taxpayers don’t want their sewage to be treated because it’s going to raise their rates.”

Decatur,The Detroit of Alabama.And the mayor and council do NOTHING...

That is absolutely disgusting and another blemish on our community. This kind of news makes the city look bad. Who is getting fired or charged for this because this is absolutely UNACCEPTABLE