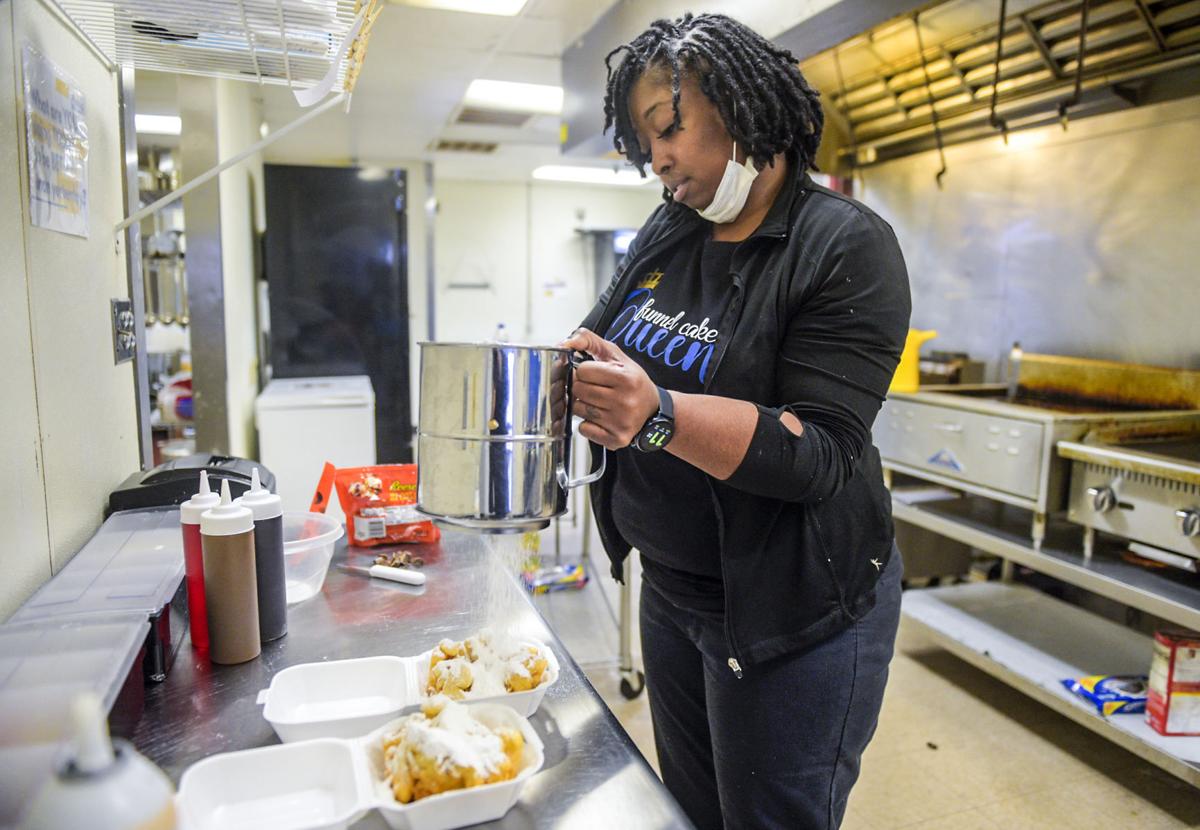 Kenya Congress sprinkles powdered sugar on two orders at Funnel Cake Queen. Congress has used the business as a vehicle to help those in need. [JERONIMO NISA/DECATUR DAILY] 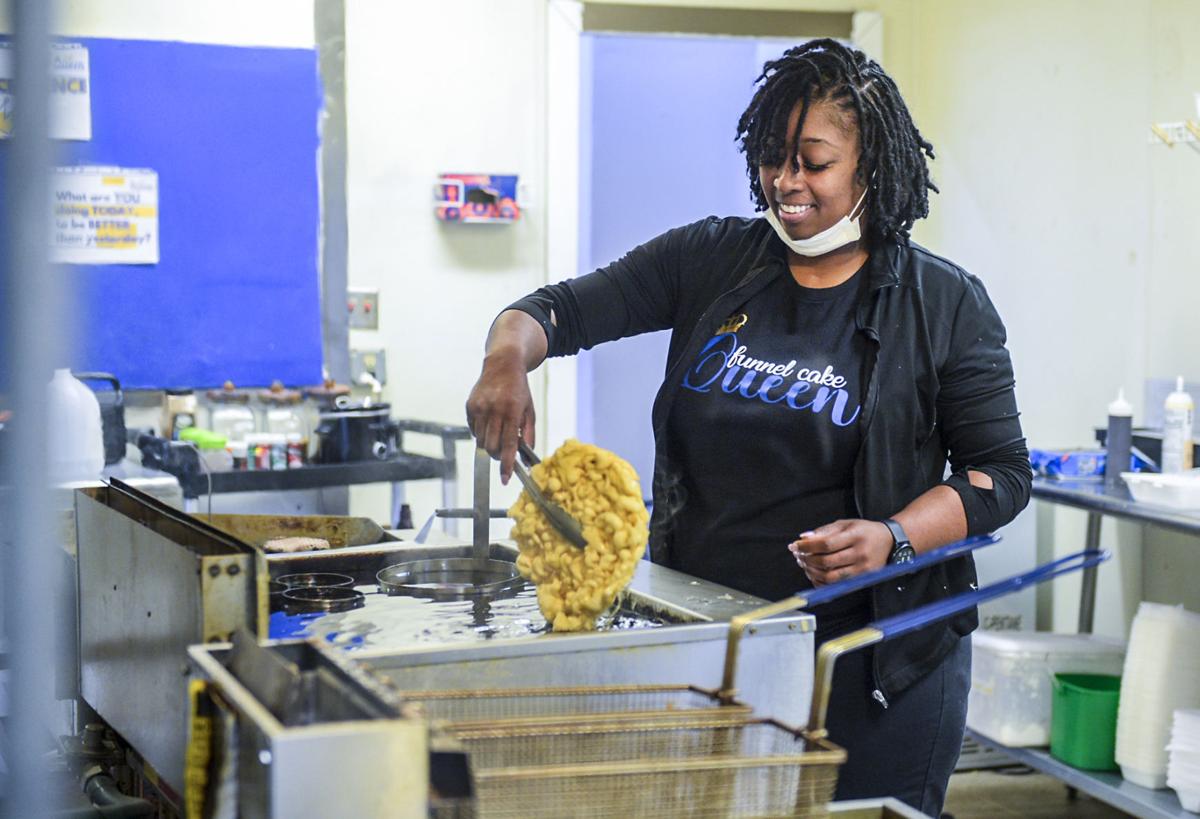 Kenya Congress sprinkles powdered sugar on two orders at Funnel Cake Queen. Congress has used the business as a vehicle to help those in need. [JERONIMO NISA/DECATUR DAILY]

And the funnel cake queen was born.

“Initially, I wanted to make the funnel cakes to pay the utility bills at Home of Grace,” said Congress, founder of the shelter for women and children. “When the bills got to be too much, the home closed and I had to find some other way to do good for the community.”

With the help of family, friends and strangers, Congress opened Funnel Cake Queen.

Since the doors to the Decatur sweet spot opened in February, the 38-year-old Congress has funneled thousands of dollars to more than 100 people, paying rent, mortgage, car and utility payments. She also organized an event to spotlight the work of teenage entrepreneurs.

For her outreach to the community and empowerment of others, Congress is The Decatur Daily’s Good Deeds Person of the Year.

“If I had to brag on anyone, it would be God. It’s been all God. I take no credit for any of this,” Congress said. “Truthfully, my faith wavered some, especially when Home of Grace closed. But I knew the only one who could put me in a place where I could continue helping people would be God. He definitely has showed out.”

For Congress, each funnel cake represents a way to share her blessings with the community.

Congress credited the Funnel Cake Queen’s successful start partly to Connie Teague with Joe’s Deli. After hearing about the closing of Home of Grace and Congress’ dream to run a food truck serving funnel cakes, Teague invited Congress to operate her business out of Joe’s Deli on Danville Road. She also offered Congress use of her funnel cake fryer and utensils.

“I was broke. I didn’t even have change to put in the register and she offered me everything I needed to start,” Congress said. “The first day, people were wrapped around the room and along the sidewalk. My goal was to do $300 a day. That way I could employ someone, help someone else out and give a portion to nonprofits. We have kept growing and growing and have been able to help so many people.”

Despite the pandemic, Funnel Cake Queen thrived as lines of cars wrapped around the parking lot, waiting for one of the unique desserts topped with a variety of items from Fruity Pebbles cereal to Gummy Bears to strawberry cheesecake.

Four months after opening, Funnel Cake Queen outgrew the shared space with Joe’s Deli and moved to a storefront on the Beltline. Two weeks after the shop opened, the dining room closed due to the safety mandate issued by Gov. Kay Ivey.

That, however, did not slow down Congress, who continued to donate a portion of the proceeds from the drive-thru to the community. That included donating to nonprofits and giving away dozens of backpacks at the start of the school year.

On Aug. 10, Congress posted to Facebook, “What bill you worried about?” The next day, she handed out more than $2,000 for rent, utility, mortgage, car and grocery payments.

“I remember being in the position where I needed help paying bills,” said Congress, who as a child lived in a home in Courtland with no running water and, 10 years ago, temporarily lived out of her car with her children. “I want to be that person that I needed. I want to help others and bless others.”

On Sept. 17, she encouraged people to send in their utility bills and pledged 20% of the store’s sales for two weeks to paying off a portion of each bill. The bills came from Decatur to Hazel Green to Birmingham.

When she saw a Facebook post from a woman in Georgia struggling to pay her utility bill, Congress reached out to her and sent her $300.

“I feel like God told us to go and do for others, so I just went. I don't really think about it when I give, I just see people in need and want to help. It feels really cool to give,” Congress said.

Those efforts continued during the holidays as Congress held an essay contest asking people to describe how COVID-19 affected them. In the 62 responses, she read about how people lost their jobs, how they struggled to pay medical bills and how they pawned their car titles to make ends meet. Congress gave $2,500 to the winner of the contest.

"There were so many people going through such trying times, it was difficult to choose," Congress said.

Along with giving to individuals in need, Congress supported teen entrepreneurs by hosting a Tailgating with Teenpreneurs event. For the one-day event, Congress invited the young business-minded students to set up shop at her store. She only required that the teens donate 5% of their proceeds to the community. To increase business, Congress offered a free funnel cake to anyone who purchased an item from one of the six teens.

“(Tailgating with Teenpreneurs) went amazing," said Samaree Bulls, an Athens High student and founder of Maree'Ology, which creates lip gloss, keychains and jewelry. "I enjoyed the experience even though it was new. I was able to meet new people and bond with my customers. I also enjoyed supporting the other vendors, and I would definitely want to do it again."

For Congress, Funnel Cake Queen is an extension of the ministry she started with Home of Grace.

“If I can make one person’s day better or brighter, that means a lot to me. That’s why I do this,” Congress said.

Should the Biden administration enter into a deal with Iran that requires international monitoring of Iran’s nuclear program?