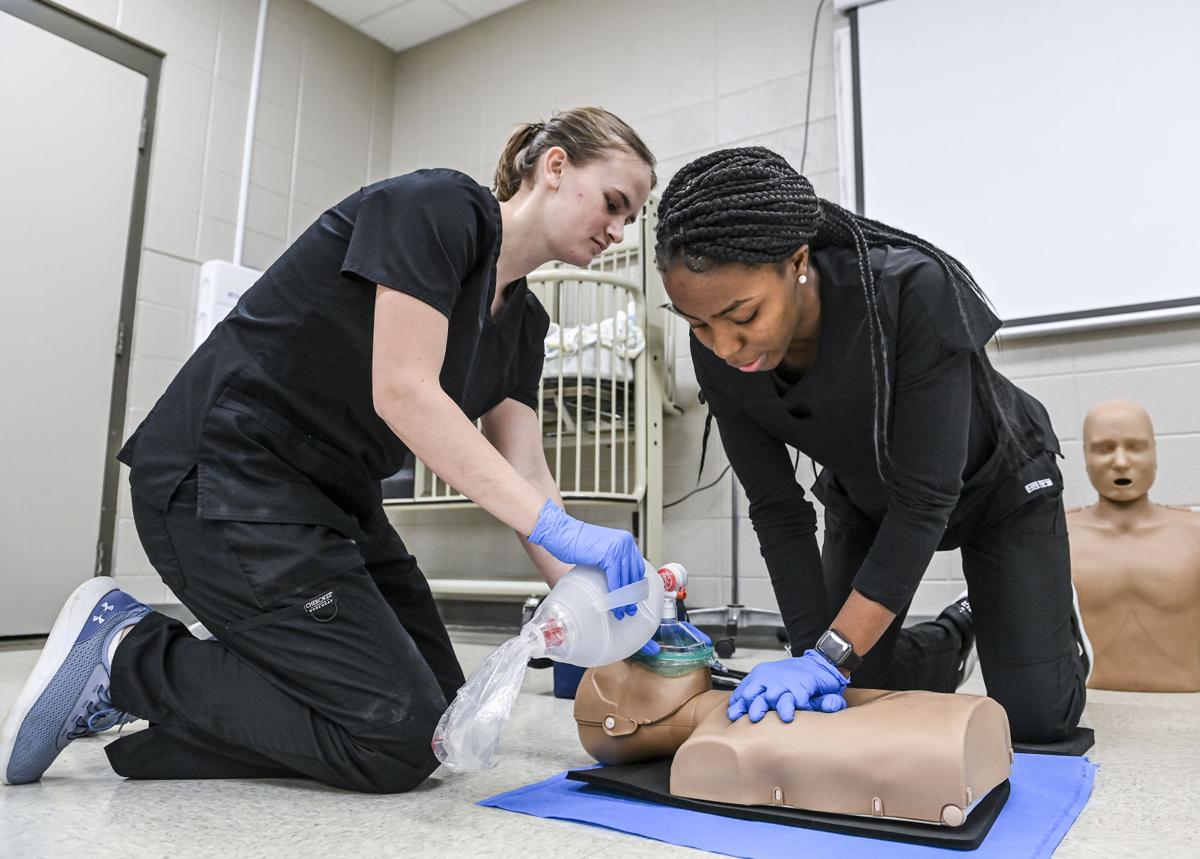 Mary Pistorius, left, and Tykera McDonald practice for their upcoming CPR/first aid state competition at the Career Academies of Decatur on Wednesday. The competition will take place in Montgomery in February. [JERONIMO NISA/DECATUR DAILY] 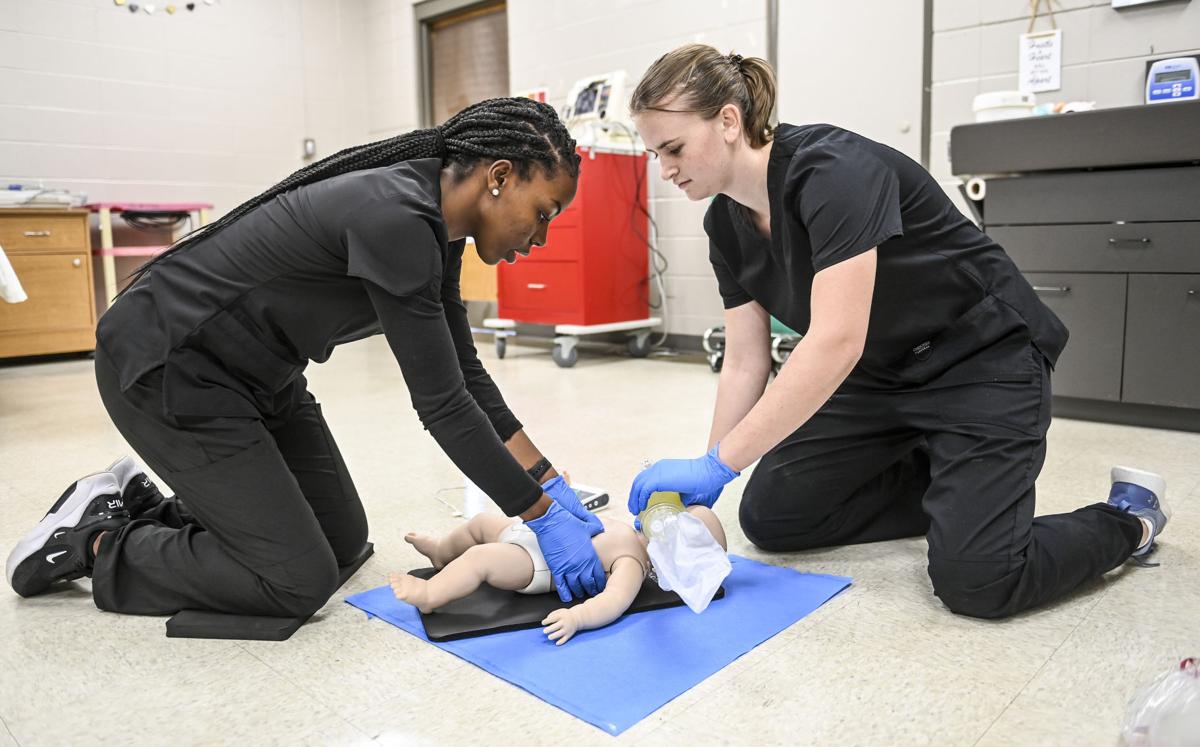 Mary Pistorius, left, and Tykera McDonald practice for their upcoming CPR/first aid state competition at the Career Academies of Decatur on Wednesday. The competition will take place in Montgomery in February. [JERONIMO NISA/DECATUR DAILY]

Austin senior Tykera McDonald knew the answers when asked how to handle finding an unresponsive person with a pulse.

Depending on the scenario, the responder would either execute rescue breathing or perform CPR with compressions while using an automated external defibrillator to deliver a shock to establish a normal heart rhythm.

McDonald fielded that question for a Health Occupations Students of America test, and her correct responses on that question and others helped her join other Career Academies of Decatur (CAD) students advancing to a state competition next month.

Health Science Instructor Kiersten Jones said the 19 qualifying CAD students are primarily seniors, but a few juniors and sophomores are in that group as well.

“We have an outstanding group of students this year,” Jones said. “(COVID) has taken so much away from them, it’s humbling to see that they go the extra mile and find opportunities.”

Both in the preliminary testing and in the state competition, students can test in nine different health science events.

Four seniors among the Decatur students who advanced said they were surprised when they got the news that they were going to Montgomery for the state competition.

“I felt both shocked and happy,” said Riley Cork, a senior at Austin High who is competing in the medical math category. “It wasn’t that I didn’t know how to do the problems I was doing, I just didn’t expect the test to go the way it did. I thought it was going to be multiple choice, but it was short answer.”

Austin senior Mayte Bastida said she chose to take the creative problem solving test this year because she thought it might be easier than the forensic sciences tests that she had taken years prior.

“The years that I took forensics, I was used to not passing that test,” Bastida said.

Jones said that the creative problem solving test was not easy by any means.

“She’s a lot smarter than she thinks,” Jones said of Bastida.

McDonald and Mary Pistorius, a senior at Decatur High, both placed in the CPR category and say they completed the hour-long test in just under 30 minutes.

“Our tests were basically asking us first responder questions,” Pistorius said. “Like the decisions you would make before medical help arrives.”

McDonald said she and Pistorius are both suited to handle hectic situations.

“We both like chaos,” McDonald said. “We’re ready for anything.”

McDonald and Pistorius want to pursue careers in the emergency room as trauma nurses and surgeons.

Though the two seniors are rivals when their schools play basketball, their main priority is work when they enter the doors of Jones’ classroom. Programs at CAD serve both Decatur and Austin students.

“There is not a divide in this classroom,” Jones said. “They look at it as a work environment.”

All four of those seniors have done medical internships this school year and have been taking Health Science courses since they were freshmen. They are all considering careers in the medical field.

Cork wants to pursue a career in anesthesiology where he can use his strengths to his advantage.

“Since I’m good with math and science, I think I would like to be an anesthesiologist one day,” Cork said.

Bastida is currently undecided but says she has been looking at some careers in pathology and forensic science.

The seniors expressed no anxiety or trepidation when asked about their upcoming competition. Jones said being raised during the era of COVID has prepared them to undertake and overcome any obstacle.

“They’ve had to learn to deal with whatever came around the corner,” Jones said. “We’ve been competing in HOSA events for over 12 years, and every year there seems to be more students who qualify after the preliminary testing.”

The HOSA Alabama State Leadership Conference will be held at the Renaissance Montgomery Hotel & Spa at the Convention Center on Feb. 23-25.

Should Decatur promote an internal candidate or conduct a national search to fill the police chief vacancy?