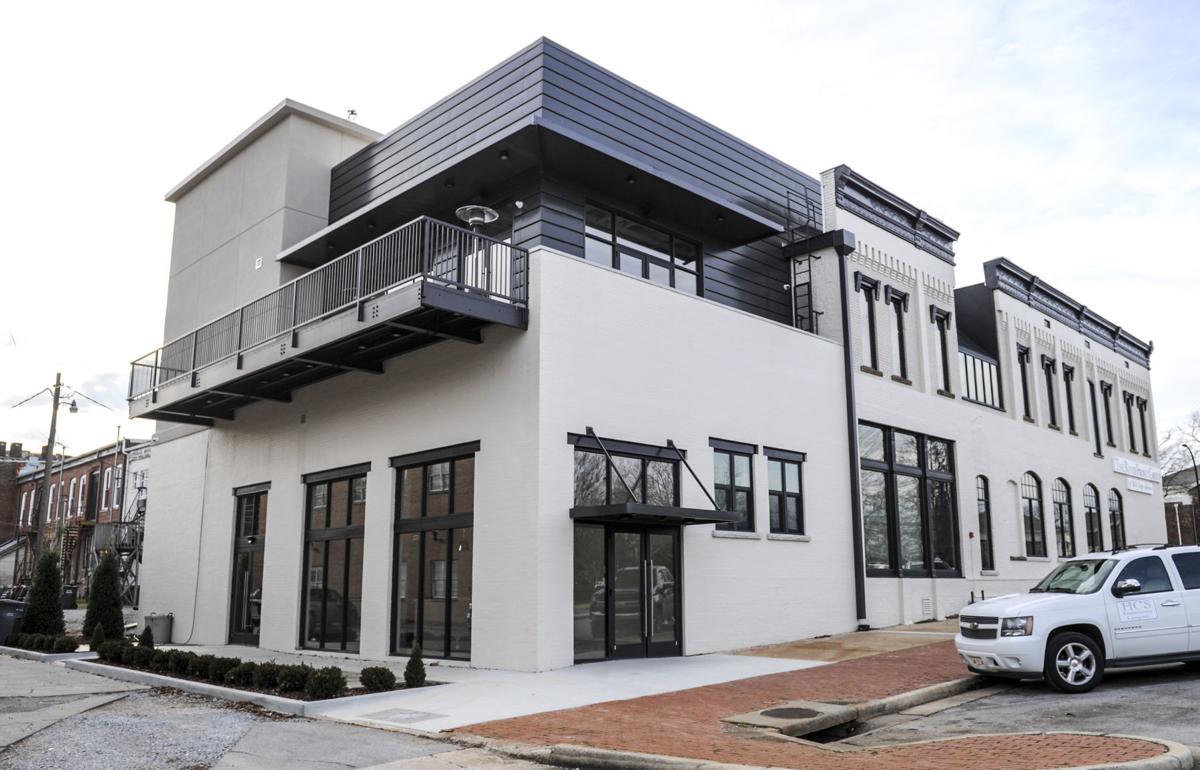 A transformed building at the corner of Church Street Northeast and Bank Street includes an addition at the rear with a cantilevered balcony. Beams in the original structure date back 130 years. An engineering firm and its 33 employees will begin operating from the building Monday. More photos at decaturdaily.com. [JERONIMO NISA/DECATUR DAILY] 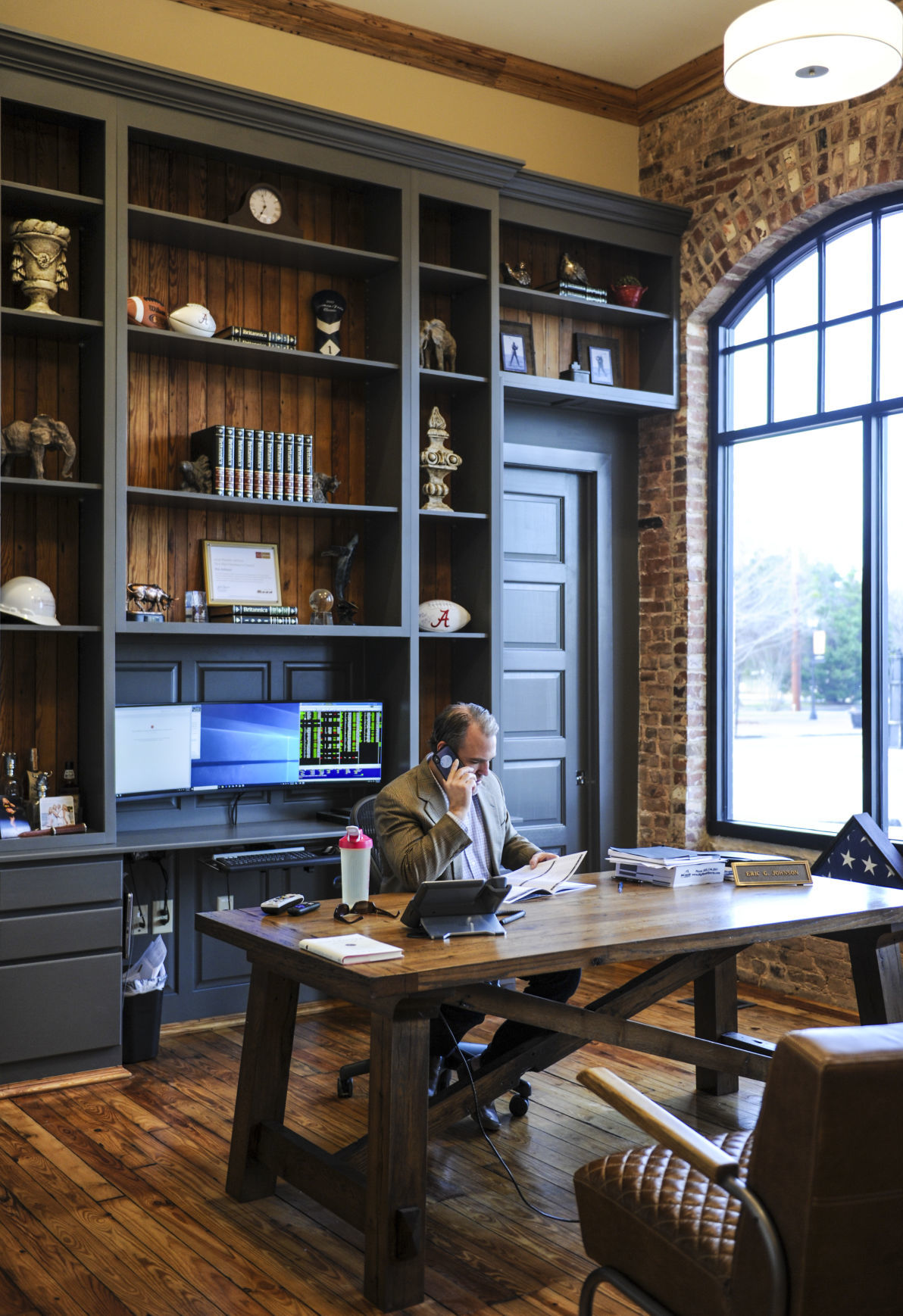 Eric Johnson works in his office in the recently renovated building at Bank and Church streets. Much of the building's heart pine wood floor was restored during renovations. [JERONIMO NISA/DECATUR DAILY] 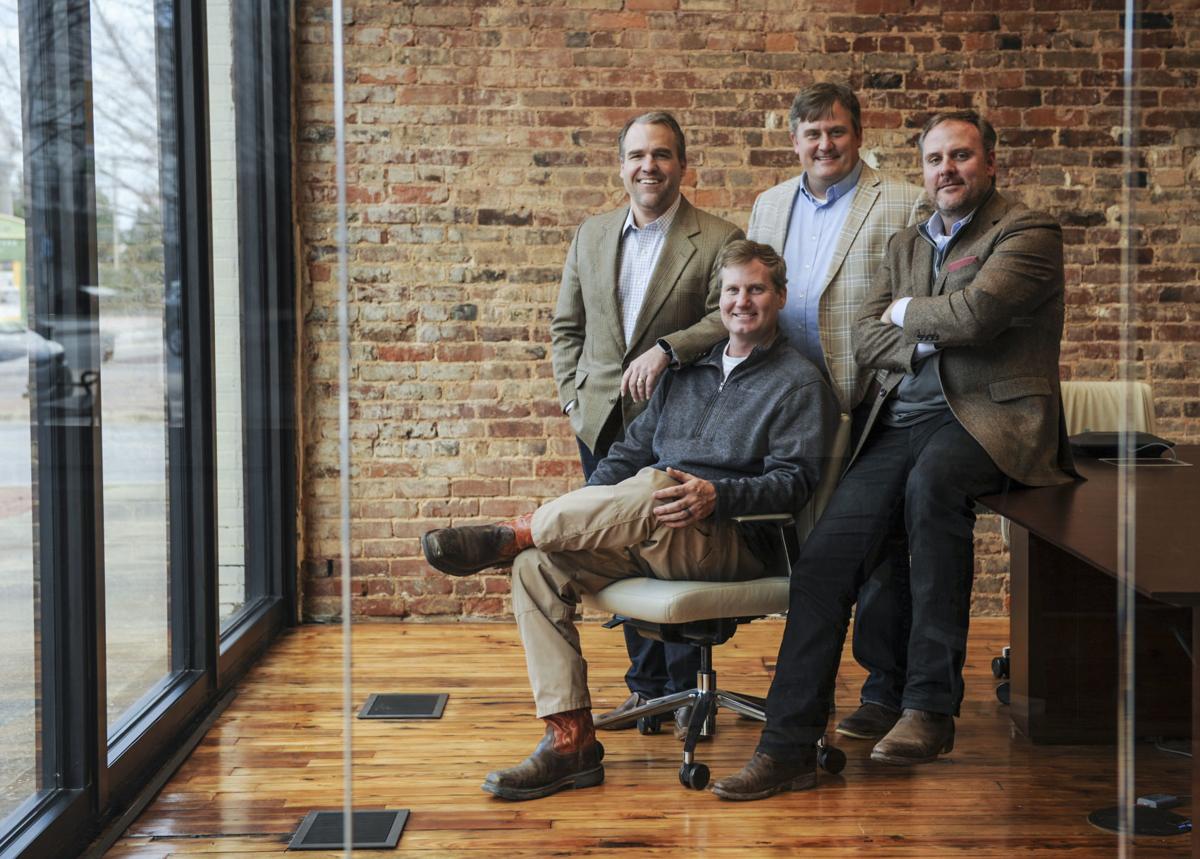 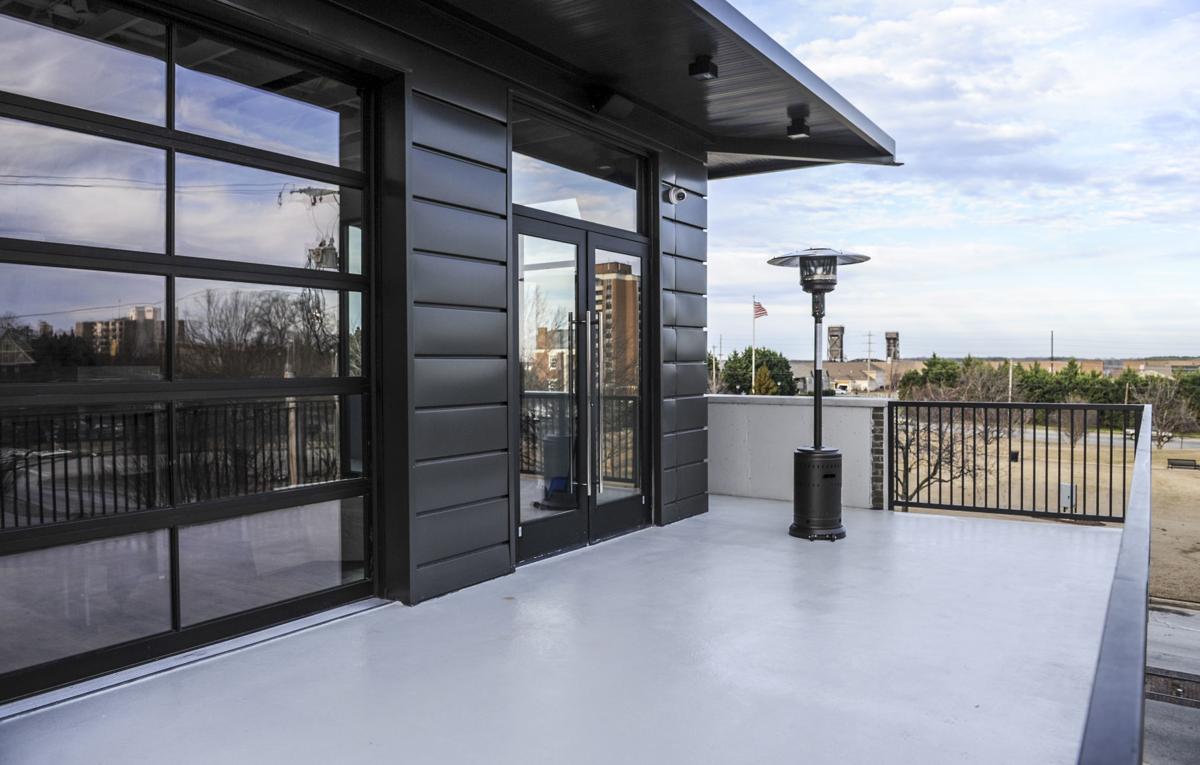 The new section added at the back of the historic building boasts a terrace with views of Founders Park, the Old State Bank and the Tennessee River. [JERONIMO NISA/DECATUR DAILY]

A transformed building at the corner of Church Street Northeast and Bank Street includes an addition at the rear with a cantilevered balcony. Beams in the original structure date back 130 years. An engineering firm and its 33 employees will begin operating from the building Monday. More photos at decaturdaily.com. [JERONIMO NISA/DECATUR DAILY]

Eric Johnson works in his office in the recently renovated building at Bank and Church streets. Much of the building's heart pine wood floor was restored during renovations. [JERONIMO NISA/DECATUR DAILY]

The new section added at the back of the historic building boasts a terrace with views of Founders Park, the Old State Bank and the Tennessee River. [JERONIMO NISA/DECATUR DAILY]

Just over two years ago, a group of local businessmen, including twin brothers, got their first look at a century-old building on the north end of Bank Street, imagining it could be transformed for office space.

Two weeks later, they closed on the purchase of the building, and the initial, partial demolition started within a few months. Construction, which included an addition at the rear of the structure, would take more than a year.

Now two local businesses — with nearly 40 employees in all — have a new home in a historic downtown building at the corner of Bank and Church streets. One of the businesses, HCS Engineering, and 33 of its employees will begin their first day of business at the new location Monday.

Brooks Collins, a co-owner of the building, said it was important to the group to be part of the revitalization of downtown Decatur. Other owners are his brother, Brent Collins, and Benji Heidecker — all of Decatur and Decatur High graduates — and Eric Johnson.

“We’re local and we hope positive redevelopment of our downtown continues,” said Brent Collins, who believes the Bank Street project can spur even more interest and development in the downtown area.

Brent Collins and Heidecker are managing partners of The Core Construction Group in Decatur, the builder/contractor for the project. Brooks Collins and Johnson are both financial advisers and managing directors-investments with The RiverFront Group of Wells Fargo Advisors, whose staff of five moved into the first floor of the building last fall.

“Nothing jumped out at us until we saw this building,” said Johnson, who lives in Athens. “We were definitely interested in doing something on the main floor,” but there were no specific plans at first for the second floor.

“When the HCS opportunity came about, that’s when the project really grew,” Johnson said.

HCS Engineering Co. will be the building’s major tenant.

“It was a challenging project, but we were able to work through the challenges,” Brent Collins said. “Our architect, Scott Schoel, is right around the corner and could respond quickly to anything that came up.”

The interior of the original 9,000-square-foot structure was gutted, with plaster removed from the walls to expose the brick underneath. Not surprising for a building that dates back 130 years, there were some areas where the heart pine wood floor on the first floor was sagging and had to be reinforced with steel, concrete and wood.

Schoel, of Schoel-Markland Architecture, said the project was one of the most complicated he’s worked on.

“We found all kinds of structural issues,” said Schoel, who realized that the original building, which had undergone numerous modifications over the years, was unstable.

It had to be shored up and to meet modern-day building codes, all of the wiring, plumbing and HVAC units had to be removed, according to Schoel. Rotted wood in the roof system and elsewhere had to be torn out, and “a good bit of re-framing had to take place just to get the building restored to a safe state to start work,” he said.

"We want to think this building will be here another 130 years," Brent Collins said.

Schoel is pleased with the finished project.

“I think it shows people have a lot of confidence in Decatur,” he said.

The addition brought the structure to a total of 13,200 square feet.

“The addition helped stabilize the original building and allowed for the support of a cantilevered balcony” on the second floor, Brent Collins said. The balcony will be part of the second-floor space that will be available to rent for private parties or meetings and will accommodate up to 50 people.

Brooks Collins said one surprising discovery during the renovation came when the building’s original cast-iron columns were uncovered. They were inscribed: "Long & Jervis, Decatur, Ala., 1890.”

“That validates the age of the building,” said Brent Collins.

The partners wanted to preserve as much of the original building’s features and re-purpose as much material as possible. The tin cornice work at the top of the building, believed to have been manufactured locally, the atrium on the second floor and the heart pine flooring, most of it original, were preserved.

“As part of the reconfiguration of the HCS space on the second floor, we were able to harvest some original heart pine 2-by-4s, mill them for crown molding and other millwork and incorporate them into the new space,” Brent Collins said.

The goal for the project was to make it first-class functional office space, Brent Collins said, “and I think we did that.”

The partners believe the building was originally used as an ice house, and most recently a salon was located in part of the building. Collins said a grocery store operated in the building in the 1950s and, when the original basement was cleaned up, painted lettering was found on the concrete floor, marking where supplies like salt and soup were stored.

“It still remains,” Collins said. “We didn’t cover it up.”

HCS Engineering will occupy about a half of the basement, a quarter of the first floor and all of the second floor, said John Conway, vice president and a co-owner of the business.

“As the project developed, we grew so we needed more space,” Conway said. The main entrance for HCS Engineering will be at Church Street.

The HCS Engineering employees moved from Beltline Road to the new location.

“We've talked to (nearby) merchants, and they're excited we're showing up," he said. "We’re seeing a lot of changes and growth on Bank Street.”