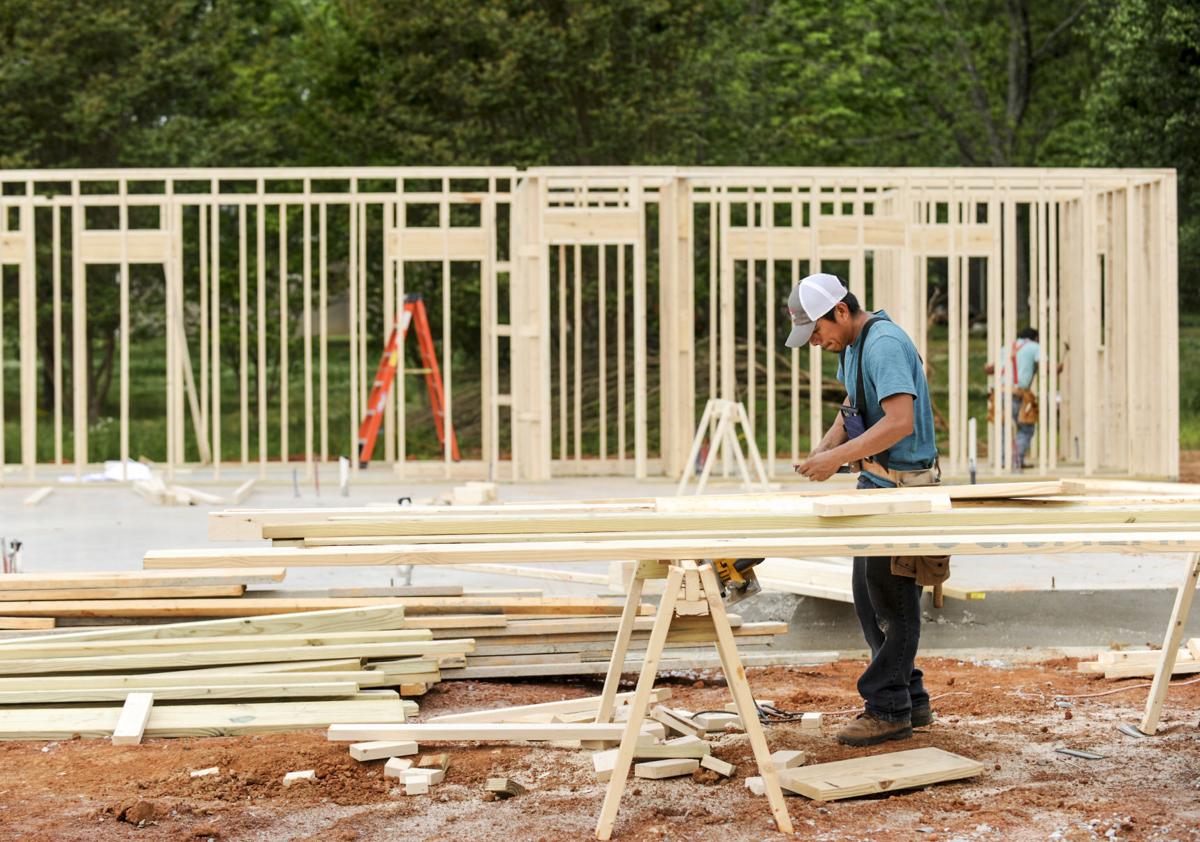 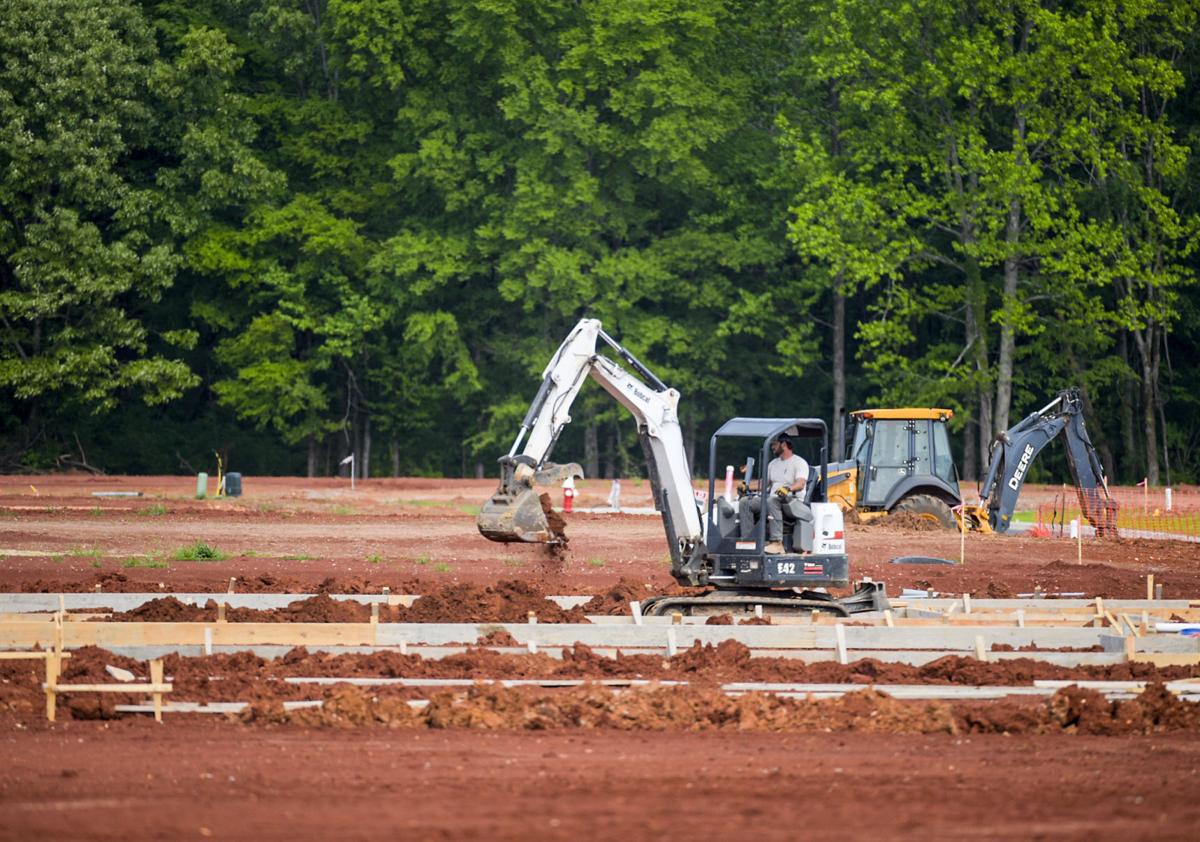 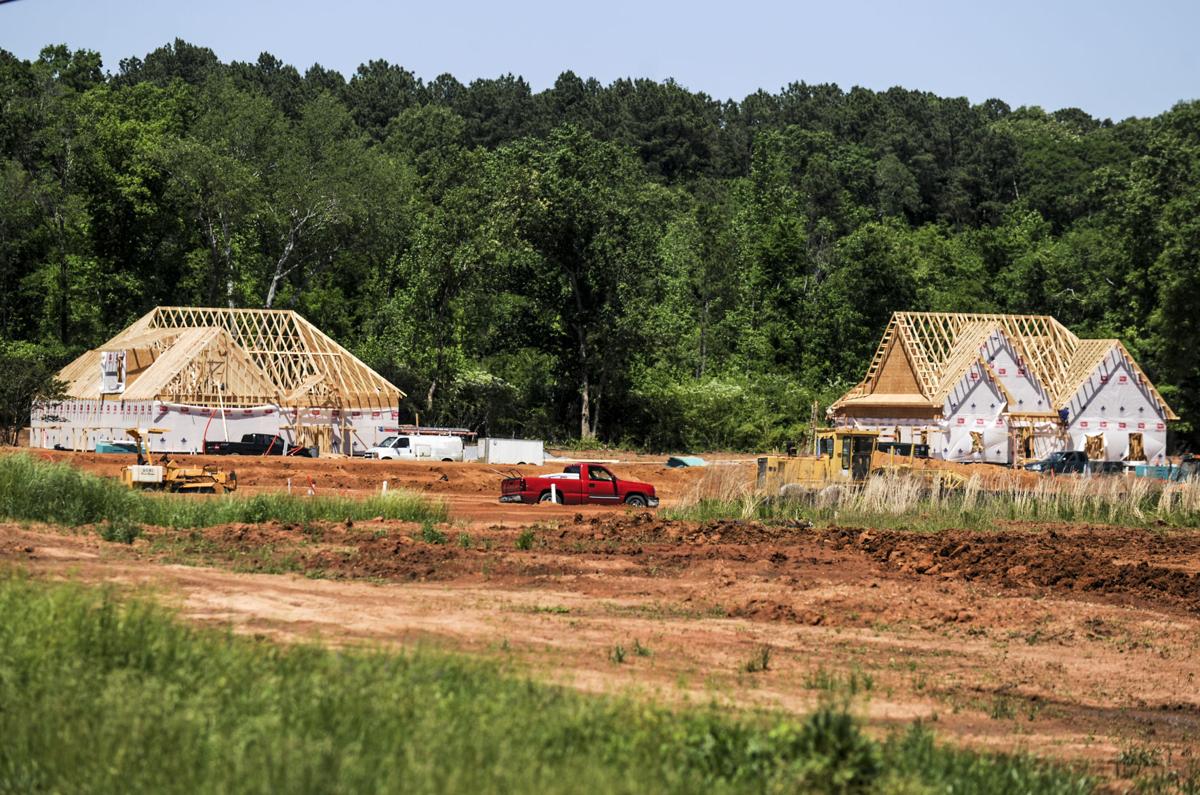 Construction continues Thursday at Old River Manor, one of two new subdivisions off Old River Road in the Indian Hills area. Both subdivisions are on properties recently annexed into Decatur. [JERONIMO NISA/DECATUR DAILY] 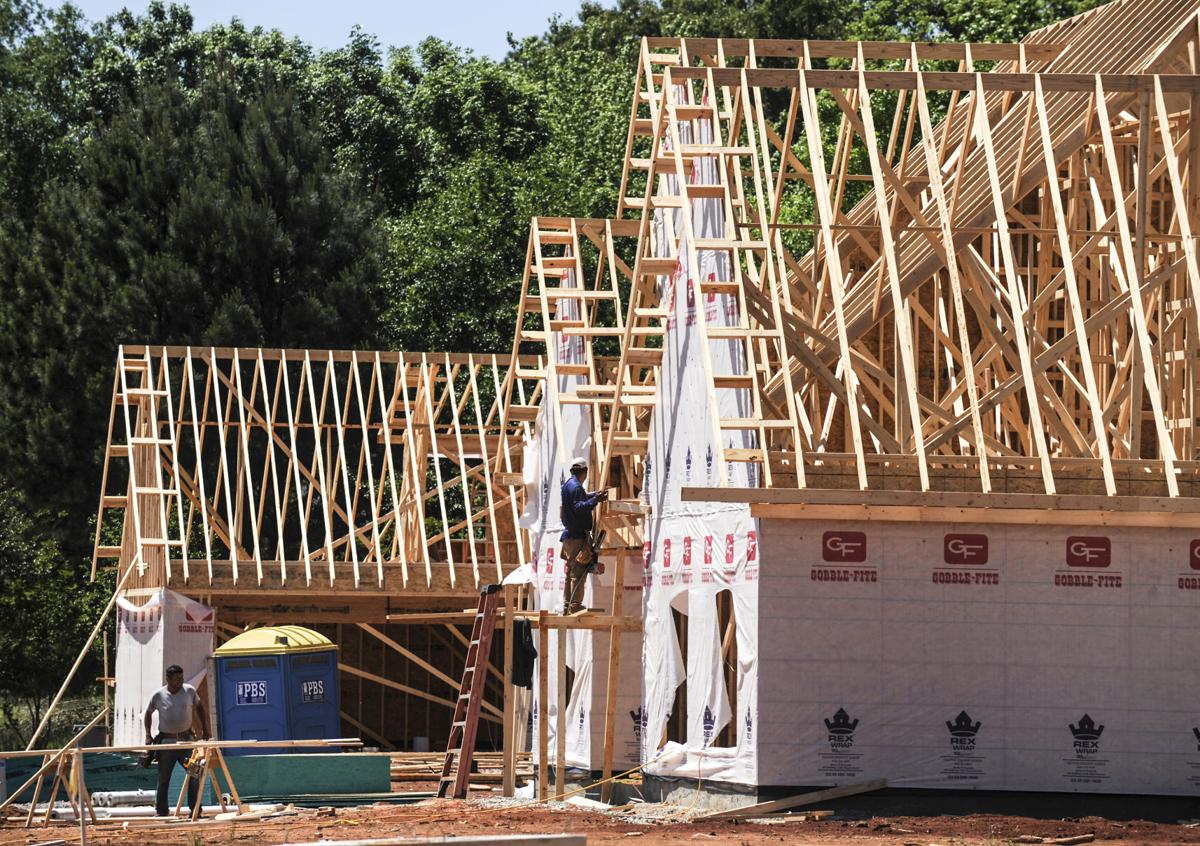 Construction of the first two houses in the new Old River Manor subdivision continues on Thursday. It is one of two new subdivisions in progress on Old River Road. [JERONIMO NISA/DECATUR DAILY]

Construction continues Thursday at Old River Manor, one of two new subdivisions off Old River Road in the Indian Hills area. Both subdivisions are on properties recently annexed into Decatur. [JERONIMO NISA/DECATUR DAILY]

Construction of the first two houses in the new Old River Manor subdivision continues on Thursday. It is one of two new subdivisions in progress on Old River Road. [JERONIMO NISA/DECATUR DAILY]

There are lots of buyers and not many sellers in the Decatur housing market, but that could change soon with frames for houses appearing in two new subdivisions and construction of two other subdivisions and three town home developments expected to start soon.

The new homes can’t rise out of the dirt and hit the market soon enough in a seller’s market when housing inventory is low and prices are rising.

Crystal Brown, vice president of retail and residential development for the Decatur-Morgan County Chamber of Commerce, said the housing market “has gotten tighter” in a city where housing was already a problem.

The chamber created a committee to focus on residential growth, hoping to end the city's more than two decades of stagnant population growth.

According to Valley MLS, there were 105 homes for sale in Decatur as of Thursday. That’s a 45.9% decrease from the previous year.

Dawes said buyers are having a hard time finding homes and, when they do, there’s so much competition that “they can’t compete with cash buyers” if they’re buying with a loan.

“It’s frustrating to the buyers and almost unfair,” Dawes said.

Unlike a quick and simple cash sale, sales using a loan can take time. A lender imposes significant cost, appraisal and inspection requirements depending on the kind of loan. Use of a lender can stretch out the pending time from a month to 45 days or longer.

Dawes said the Decatur area is considered a seller’s market because prices are high and the homes are selling quickly. Valley MLS says average sales prices are up 18.4% this year to $201,018, and the price per square foot is averaging $94 in Decatur.

She said homes are selling quickly and at inflated prices, but some people are reluctant to sell despite the potential gains. They’re concerned their house will sell too quickly.

“They’re worried they won’t have a place to go,” Dawes said.

Nashville developer Yogi Daugher, who along with Decatur native Steve Armistead is planning to build the McGhee Square town homes in downtown Decatur, said the city is ripe for development and particularly needs town homes and apartments.

Construction of the 18-town house development between Walnut and Ferry streets in Northeast Decatur is on track to start in June, Daugher said.

With plants like Mazda Toyota Manufacturing and Polaris bringing so many people to the area, Daugher said Decatur needs the multi-family homes or it will lose out on anticipated growth.

Daugher said the new employees will establish roots in the city they choose even if they only rent.

“It’s not like they’re going to come back in three years,” Daugher said, if they choose to reside somewhere else. “And it’s a shame because the city could miss out on the next generation if something isn’t done.”

Another developer, John Plunk of Athens, plans to start work next month on a subdivision off 14th Avenue Southwest, north of Douthit Street. He said he began the project because Decatur needs the homes.

“Decatur doesn’t have many new homes so it’s a market that’s ready to be tapped,” Plunk said.

The planned new developments are creating hope for the Decatur area, but developers and contractors are having to overcome several major issues, including the price and availability of supplies, subcontractor availability and the difficulty finding employees.

Plunk, who has nine subdivisions in development in Limestone and Madison counties plus the one in Decatur, said materials pricing and availability are such issues “that subcontractors are afraid to bid a job because they’re afraid they won't get the materials quickly enough and at the price they expect.”

Frank Pate, president of the Greater Morgan County Builders Association and owner of Pate Enterprises, said material prices are forcing some contractors, particularly those who do custom homes, to hold off on projects.

Lumber has increased the average price of a new single family home by more than $35,000, the National Association of Homebuilders said last month.

Builders paid an average of $16,927 for the lumber and manufactured lumber products used to build a single-family home in April 2020. Now that cost is $48,136. Add in interest and fees and NAHB calculates the lumber price hike added $35,872 to the cost of building a house in the past year.

In a recent NAHB survey, 47% of single-family builders said they were including price escalation clauses in their sales contracts.

Plunk is planning a 59-home subdivision on the 70-acre 14th Avenue site, but he said he’s had trouble with “manpower supply. I’m having trouble just getting workers to do earthwork.”

Plunk said he’s hoping to start infrastructure work on his Decatur subdivision in about two weeks. He said he has a deal with a contracting company to build and sell the homes.

“We’ve got to knock some trees down and do some clearing to get the site ready for the infrastructure work,” Plunk said.

Plunk isn’t the only one who believes Decatur is a good place to build.

Two subdivisions off Old River Road in the Indian Hills area are in the beginning stages of home construction. Both are on properties recently annexed into Decatur. The city spent almost $1 million on a sewer main extension that began in 2019 for these subdivisions.

DH Morris Development, which consists of Howard Morris and his family, are still working on the streets for Old River Manor — a planned two-phase, 55-home subdivision. However, they got a building permit from the city to allow home construction while they continue building the roads, Peyton Morris said.

Presales are going so well that they already have 10 lots reserved, Peyton Morris said.

“We have seven people ready to go right now, and that’s definitely better than we anticipated,” he said.

At neighboring River Road Estates, a project developed in a partnership between Davidson Homes and brothers Charles Morris and David Morris, infrastructure is complete for phase 1. Infrastructure includes roads, curb and gutters, and sewer and water mains. Davidson Homes is buying the lots and building the homes.

The Morris brothers are also planning a town house development to go along with River Road Estates. Charles Morris said they will initially build four of the 36 scheduled town houses.

Meanwhile, work continues on infrastructure for Legacy Cove subdivision, off Point Mallard Drive Southeast, and they haven’t reached the point where home construction can begin, said Jeff Parker, who is leading the project for Land Services LLC.

Land Services plans 74 homes on 29.64 acres for Legacy Cove. Parker said he is selling the lots individually and then the buyer selects a contractor. After the sale, he said he does reserve the right to OK the final house plan and appearance.

Evergreen Living is working on plans for a semi-attached residential home development on 28 acres owned by Adam Davidson at the intersection of Upper River and Deere roads in Southeast Decatur.