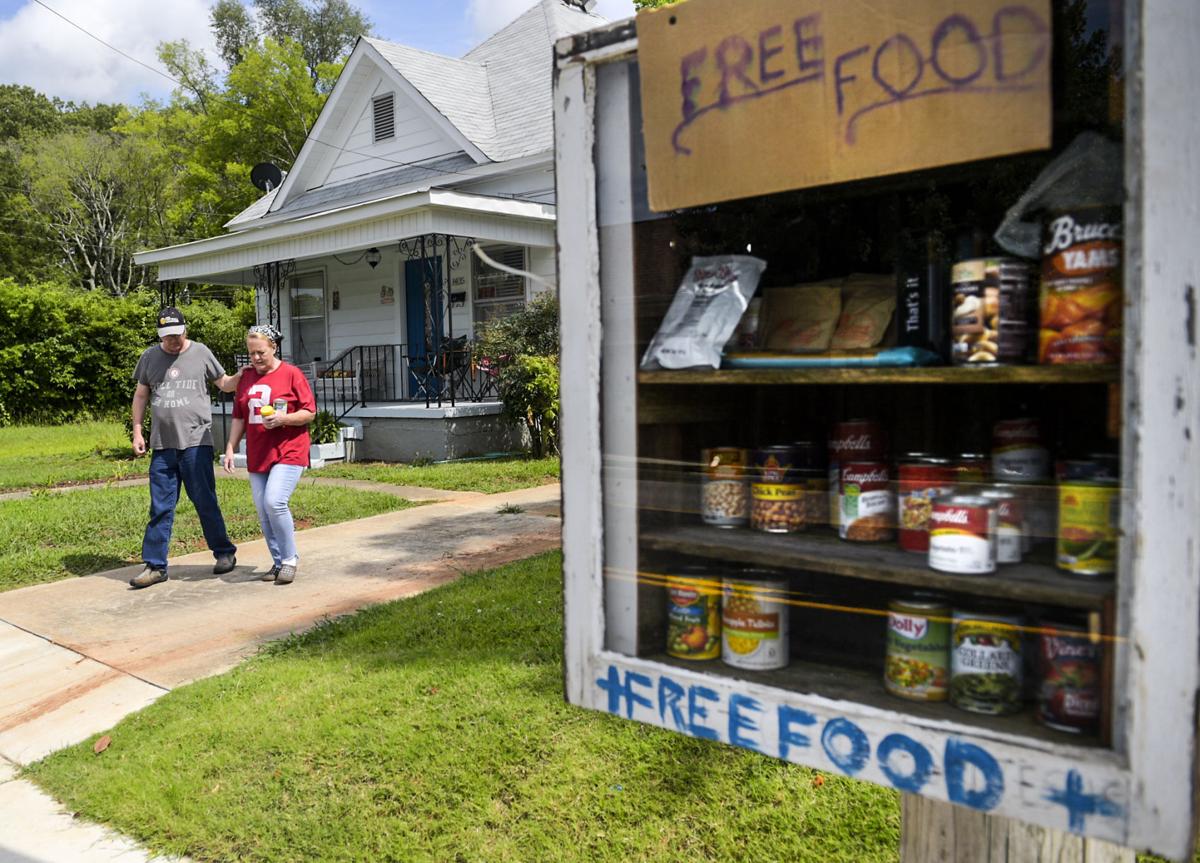 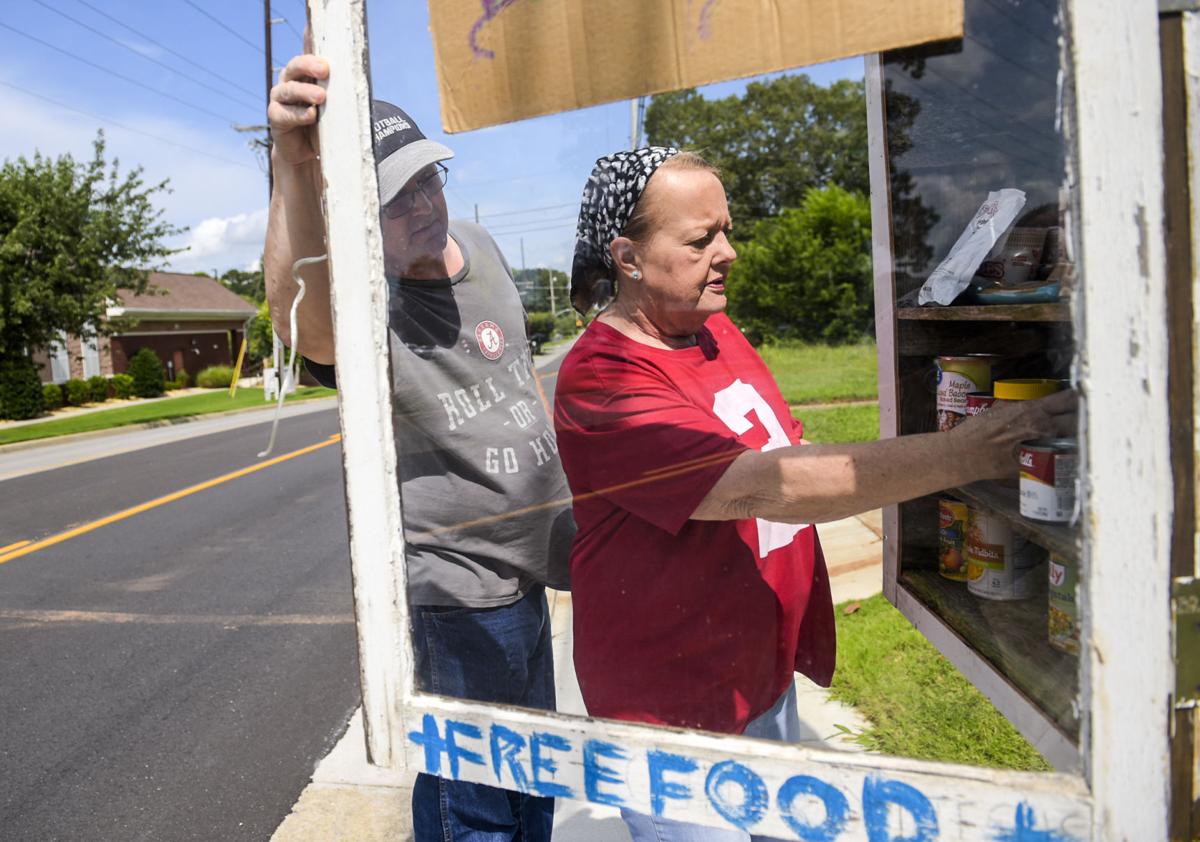 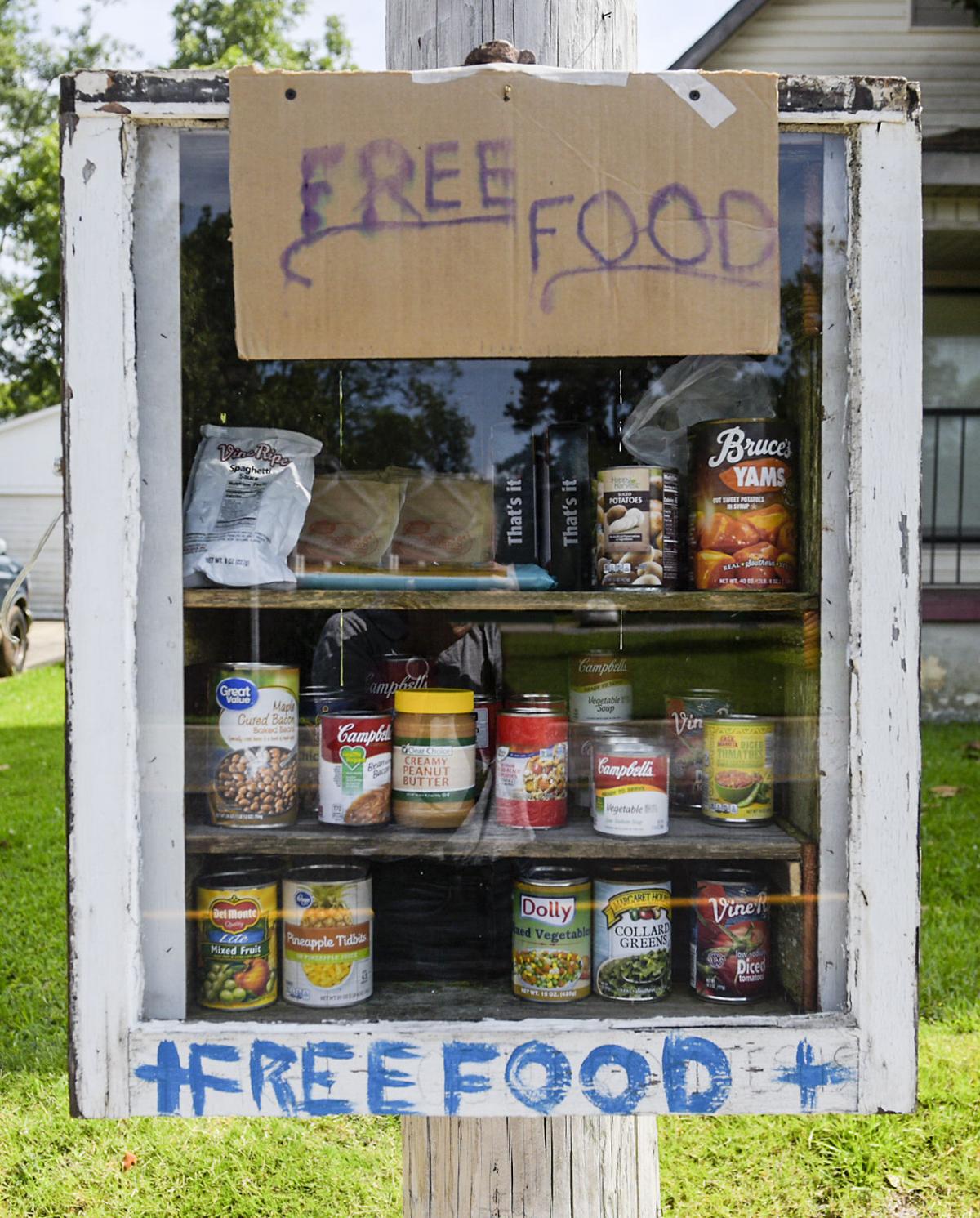 In the front yard of a house on Eighth Street Southeast in Decatur is a white wooden box with a glass door bearing the words “Free Food” painted in blue.

The homeowners line the three shelves with nonperishable foods like peanut butter and canned vegetables, and by the next morning, the shelves may be bare.

It’s the work of married couple Keith and Janice Knighten, who moved into their Southeast Decatur home three months ago and built the box shortly after as a resource for the city’s homeless community.

“We’ve been doing this for about a month now,” said Janice, 60, who was once homeless herself before she met Keith and remembers days she went hungry during that time.

Janice said at that point in her life she couldn’t save $1,000 to live in an apartment, so she had to live in her car.

“Until you’ve been through that, it’s something I pray that nobody has to go through,” she said. “I want to be able to feed the hungry and heal the sick.”

The couple said they purchased their home with the intention of assisting Decatur’s homeless population, whom they say often pass by in the night. Keith said two homes once adjacent to theirs were condemned and demolished while homeless individuals were taking up residence in them.

“I was wanting to flip these houses not for profit but for homeless people,” said Keith, 53.

The Knightens bought their property five years ago, but their hopes to cater to the homeless through the house were delayed when Keith was diagnosed with Crohn’s disease.

“Right after I bought it, I got sick, so it’s taken five years to remodel it,” Keith said.

In addition, Janice said the couple had their power tools valued from $1,000 to $3,000 stolen on multiple occasions which put a further dent in their plans. Now that they’re moved in, they said they try to stock their free food box regularly to give to those in need.

“We don’t put cold goods out there, but … rice, spaghetti sauce, all kinds of canned goods (and) all kinds of oatmeal for breakfast,” Janice said.

The couple hopes to consistently purchase food items for the box twice a month, but they said they don’t expect that to always be possible as they live on disability payments for their expenses and aren’t eligible for food stamps. At times, they have received donations from other sources like Hands Across Decatur, which also seeks to be a lifeline for Decatur’s homeless. Keith added that the goal is to give out enough of a variety of foods for people to make a meal.

“Peanut butter will go a long way if you’re hungry,” he said. “It’s got a lot of protein and will keep you from starving.”

Janice said it’s not often they see people obtaining items from their their box. They believe that's because some people aren’t comfortable appearing needy. However, she said she prays for the box to become empty soon after she resupplies it each time.

“Some people will come at nighttime because they’re ashamed to let people know they’re hungry,” Janice said. “We hope for it to start happening in the daytime, too. We hope for people to not be scared to get food when they’re hungry.”

The Knightens attend worship services at Decatur Christian Fellowship, and they said their faith has been a strong motivator for them in their mission to feed the homeless.

“We hope that one day this is going to lead us to having our own ministry,” Janice said. “Then we’ll be able to feed a whole bunch of people.”

Keith said it’s his understanding some in need of food may be hesitant to visit churches for support because of the thought of participating in church programming.

“Some churches want you to sit through a service to get food; a lot of churches put stipulations on it, so it’s not free,” he said. “With our box, you can open that door and you can get it. Anybody can stop by and get it.”

Their church has previously offered support structures for food insecure individuals over the years such as its Lunch with the Word program which provided church visitors free lunches alongside sermons. Those who participated most often were night shift workers, housewives and stay-at-home mothers rather than those who were homeless, according to John White, pastor of Decatur Christian Fellowship.

“When we first did it we saw some homeless in and out who’d come and eat lunch,” White said. “We diverted our attention to reach more people through television; that's why we quit doing it.”

More recently, White said, the church had a food pantry, but after a couple of years the church determined it would be better to support existing food-focused ministries elsewhere. He said the church has attempted to support and minister to a group of homeless individuals on the land behind the church beside Central Avenue Southwest, but those individuals have not been interested in assistance from the church.

“We have (reached out) but they’ve got their own way of doing things,” he said. ”We do what we can all the time trying to reach more people.”

Keith said he’s always been aware of a homeless presence in Decatur, including the group on the land behind Decatur Christian Fellowship.

“I don’t know what needs to happen around here,” he said. “There seems to be a lack of support for the homeless and the people that nobody wants. Somebody needs to help them.”

The Knightens say they want to provide that help on a personal level rather than an organizational one.

“Every act of random kindness is a seed of love, and it’ll come up a harvest,” Keith said.

I am so proud to be a part of this community because of people like the Knightens. Good on them for putting faith into action!