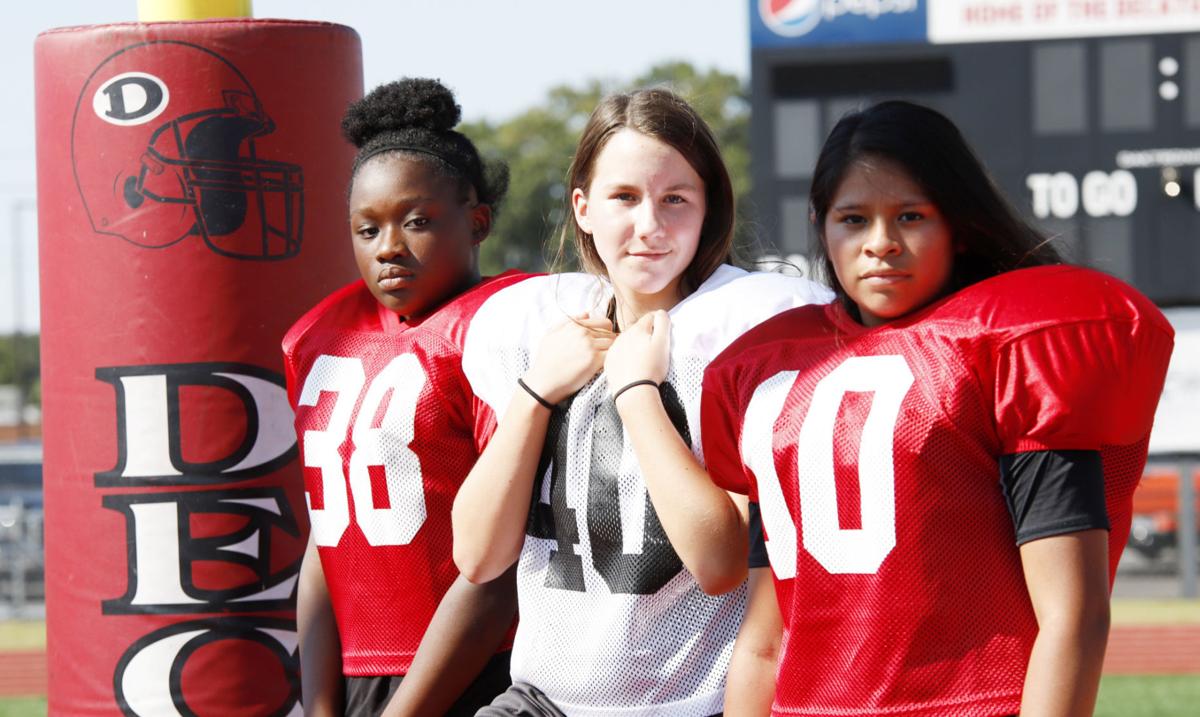 Yamilet Ortiz (10), Kate Parker (40) and Courtney Wynn (38) said they would like to play high school football at Decatur. They say the male players at Decatur Middle didn't take them seriously until they started winning some drills in practice. [DEANGELO MCDANIEL/DECATUR DAILY] 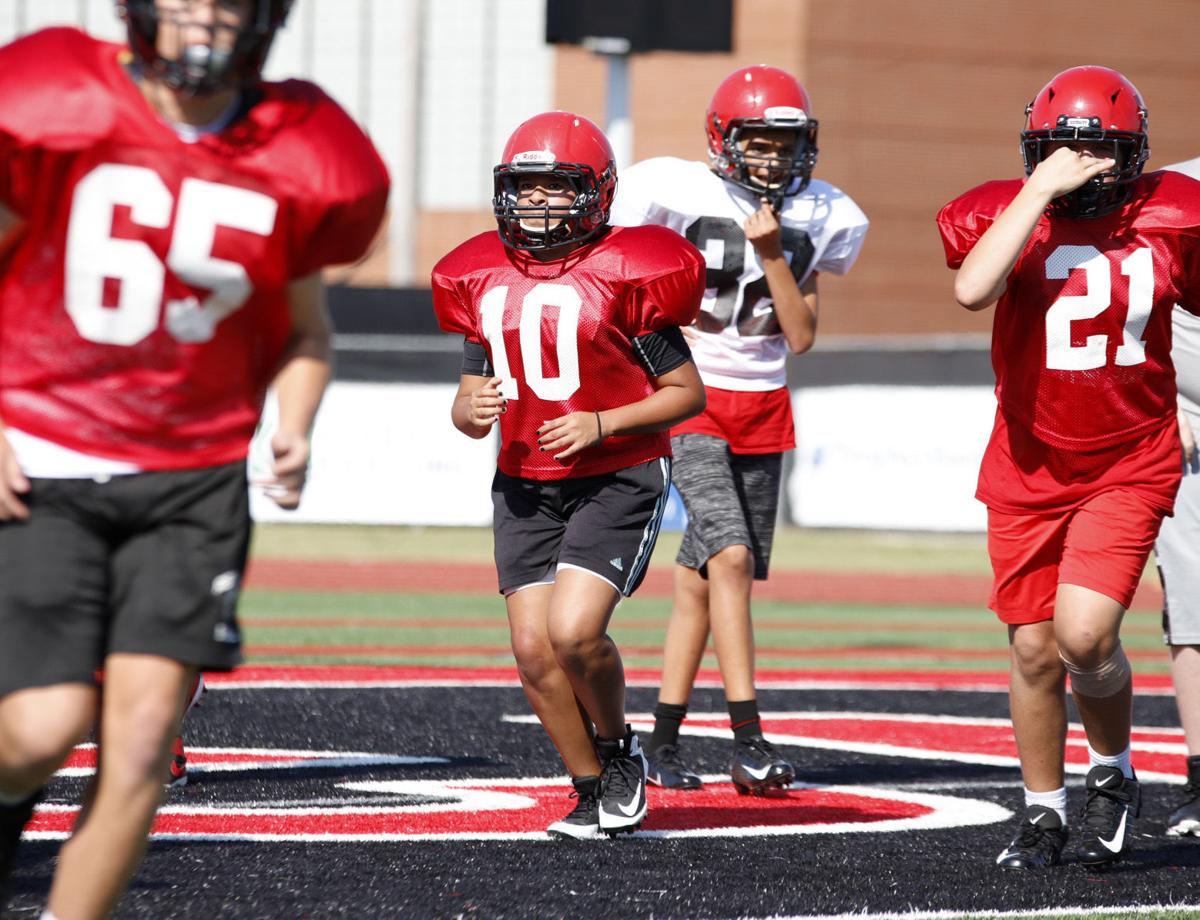 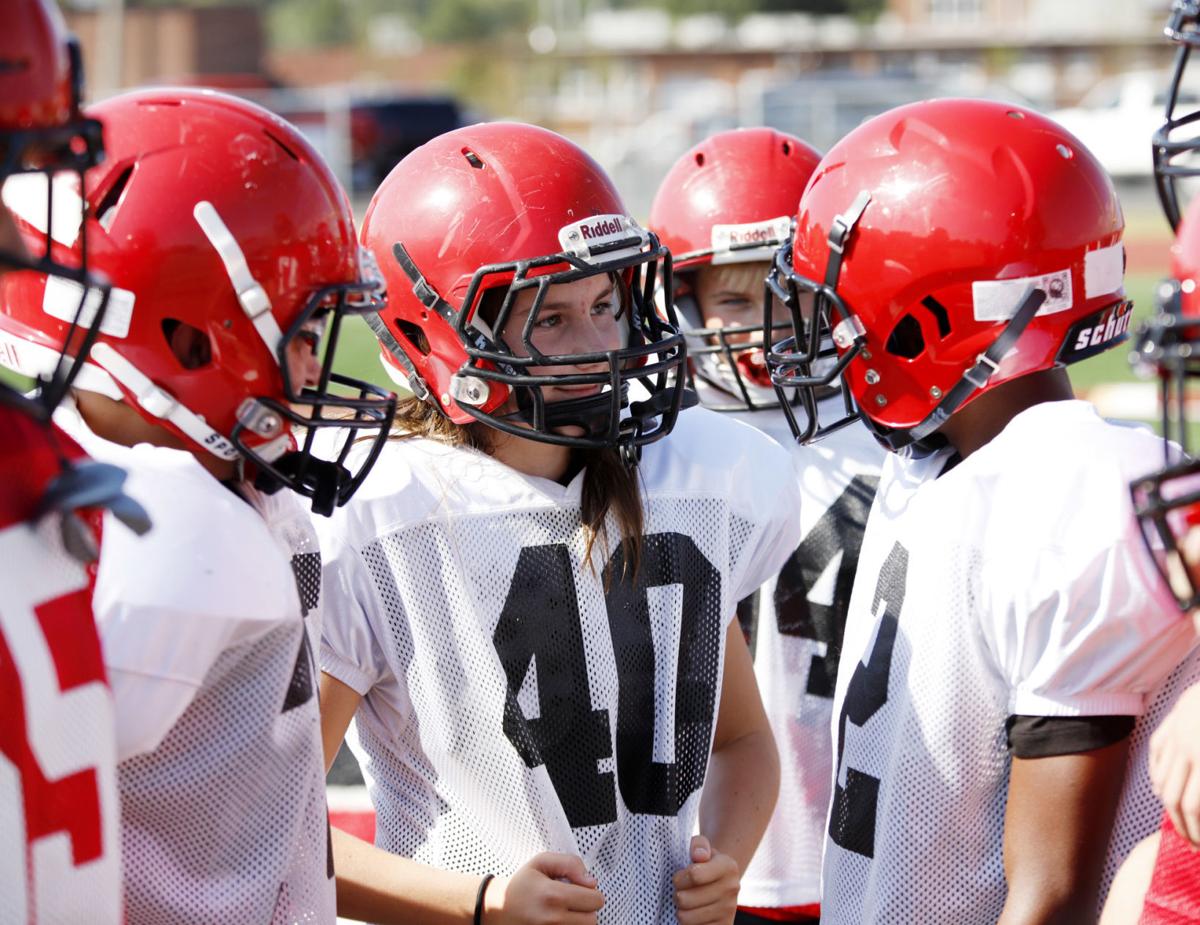 Yamilet Ortiz (10), Kate Parker (40) and Courtney Wynn (38) said they would like to play high school football at Decatur. They say the male players at Decatur Middle didn't take them seriously until they started winning some drills in practice. [DEANGELO MCDANIEL/DECATUR DAILY]

One of the few times Yamilet Ortiz questioned her decision to play football at Decatur Middle School was when she arrived for summer camp and looked at Kate Parker.

“She gave me this look and I was like, ‘Wow, I thought she would have my back,’ ” Ortiz recalled.

Parker doesn’t remember the look she gave, and Courtney Wynn says she didn’t worry about what anyone thought or how anyone looked at her in the locker room at Ogle Stadium.

Ortiz, Parker and Wynn are among the few girls across the nation playing high school football, according to the National Federation of State High School Associations.

And they are not just names on a roster.

“They all are very coachable, doing a good job and we treat them just like one of the boys,” said Decatur Middle head coach Pierre Coggins.

Parker, who begged her parents for years to play, is on the seventh grade team and plays outside linebacker and left guard.

Wynn and Ortiz, both 13, are on the eighth grade team and in backup roles. Wynn plays offensive guard and Ortiz plays halfback.

Starting quarterback Bradin Dupper said it was a little different in the beginning having girls in the huddle, but they have earned their way onto the team.

Running back Ashton Garland and lineman Jackson Sherrill said they were a little apprehensive about hitting Wynn and Ortiz in practice.

“They will hit you, so now I treat them just like any other player on the field,” Garland said.

“They are not afraid, so you have to approach them that way,” added Sherrill.

The debate about whether girls should be on the same team with boys has been ongoing since Title IX opened playing fields across the nation to females. Title IX is the 1972 federal legislation that prohibits school districts from discriminating in education programs and activities based on gender.

The debate, however, isn’t always just about equal access.

Many sports advocates for females — such as the Women’s Sports Foundation— believe that mixed training and competition can foster mutual respect, improve both boys’ and girls’ social skills, enhance resilience, and provide experiences that will help boys and girls in their broader lives.

Of the 5.5 million Americans who report playing tackle football in 2018, 596,000, or 10.9%, were females, according to the Sports and Fitness Industry Association.

While it’s not uncommon for girls to play youth or flag football, concerns about their size and strength compared to male participants keeps many off the field when they reach middle and high school.

Terry Wynn — a custodian at Decatur Middle — had this concern for his daughter and suggested she play volleyball, basketball or softball with the girls.

“She insisted on football and kept questioning me about why she couldn’t play,” he said. “I talked to her about the consequences and here we are. She’s proved what I thought wrong.”

The same thing happened for Parker, whose father Watt Parker is a longtime high school coach and currently serves as athletic director for Decatur City Schools.

“We laid out the pluses and minuses and allowed her to make her decision,” he said, adding that his daughter grew up playing football in the backyard with her older brother, who is a freshman on Decatur’s junior varsity team.

Ortiz was the only female on the team as a seventh grader. She said she had to temporarily leave the team for family reasons in the middle of the season, but knew she would play again.

“It was scary when I was the only girl on the team, but I wanted to play,” said Ortiz, who gravitated toward football after she tried out and didn’t make the cheerleading team. “I wanted to be involved with sports.”

She was playing football with Wynn in physical education and talked with her about joining the team. Ortiz said she didn’t know Parker, but heard “about another girl playing football.”

Then came that moment in the locker room when she got that look from Parker.

“She was so serious, but we’re friends and teammates now,” Ortiz said.

“They started talking to us and it’s like a family atmosphere now,” Parker said. “I don’t want my teammates going easy on me because this makes me extremely upset and I want to hit them so hard that they won't remember I’m a girl.”

Decatur Middle’s only game this year has been against Florence. Parker played in the seventh grade game, but Ortiz and Wynn didn’t play in the eighth grade game.

Parker said she was terrified because Florence “was huge” and they didn’t realize she was a girl until about midway through the second quarter.

“They saw my braids and I heard one of the players say I was a girl,” she said.

Although the road is challenging, Ortiz, Wynn and Parker said they want to continue their athletic career through high school and possibly beyond.

Players like Katie Hnida and Toni Harris have convinced them “we can do what we want,” Wynn said.

Hnida became the first woman to score in a NCAA Division I game when she kicked two extra points for the University of New Mexico in a game against Texas State University in 2003.

Harris became the first woman playing a skilled position to sign a letter of intent when she accepted a scholarship to Central Methodist University in Missouri in March.

Wynn said she spends a lot of time following Harris on social media, while Parker said her favorite player is Jalen Watts, and Ortiz said she admires Tom Brady.