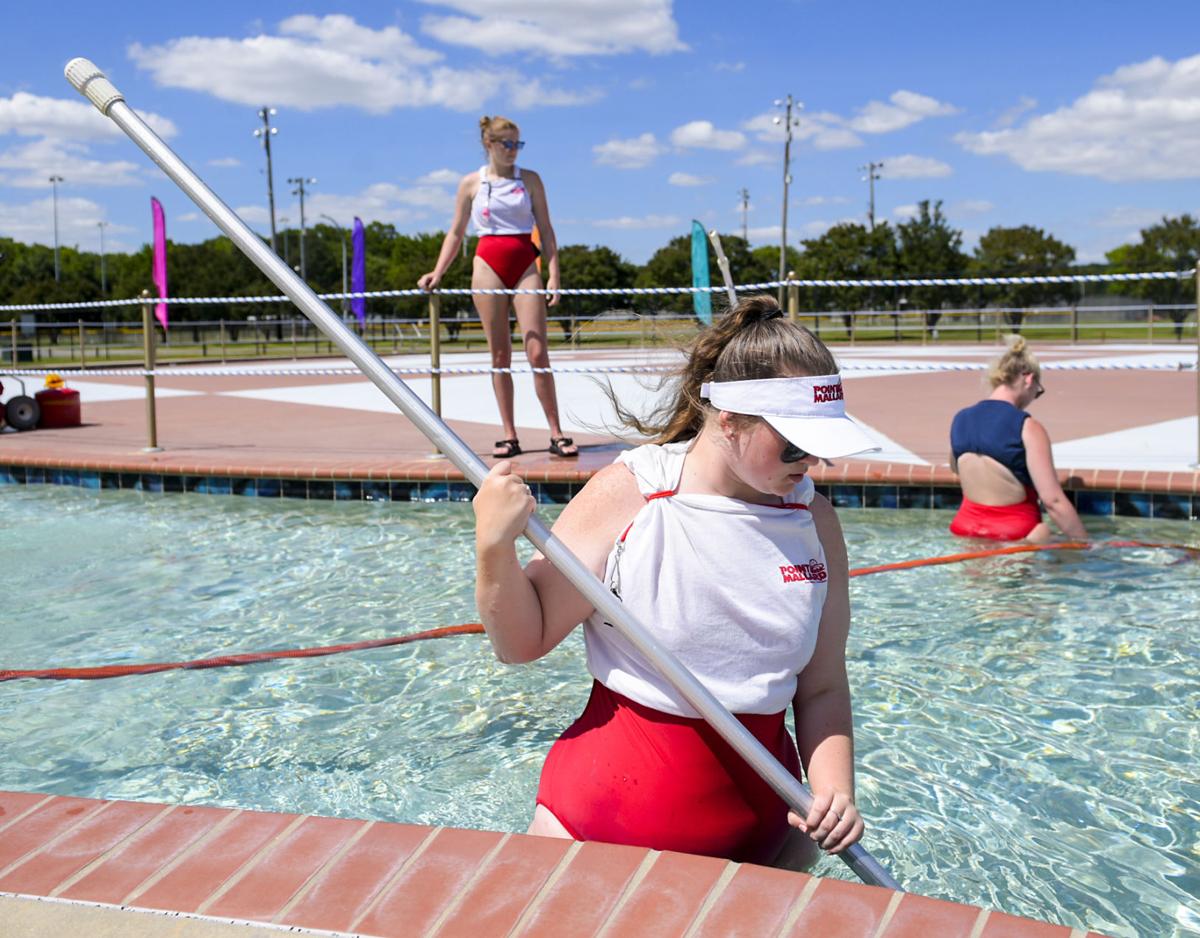 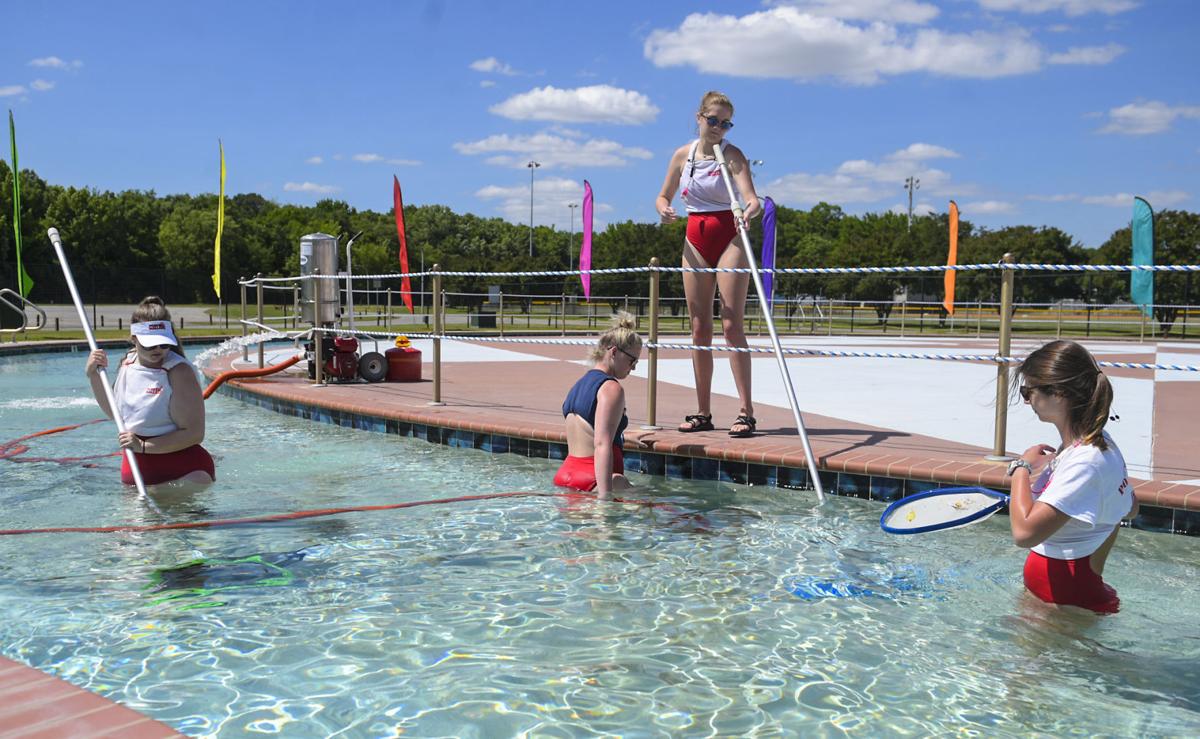 Point Mallard lifeguards, from left, Brooke Hobbs, Riley Hobbs, Madison Cartee and Linda Powell clean the lazy river attraction on Thursday. The park has hired only 60 lifeguards so far, when it usually has 80 to 110 by opening day. [JERONIMO NISA/DECATUR DAILY]

Point Mallard lifeguards, from left, Brooke Hobbs, Riley Hobbs, Madison Cartee and Linda Powell clean the lazy river attraction on Thursday. The park has hired only 60 lifeguards so far, when it usually has 80 to 110 by opening day. [JERONIMO NISA/DECATUR DAILY]

Hours will likely be trimmed at Point Mallard Aquatic Center and the Hartselle pool due to a shortage of lifeguards, and another Decatur pool may not open at all, officials said.

With opening day eight days from now, it's a problem that is complicating plans as Point Mallard prepares to celebrate a belated 50th birthday after the Aquatic Center was closed last year due to the coronavirus pandemic and anticipates many customers returning to the pool.

Parker Vandine, a 19-year-old University of Alabama in Huntsville student, is starting his fourth summer as a Decatur lifeguard. He said “there’s a lot of energy” among the employees because they’re excited to return after missing last summer.

Nicole Belcher, Decatur Parks and Recreation marketing and events coordinator, said Thursday that season ticket sales started slowly in the early spring but, as the pandemic waned, they’ve really taken off. Season tickets purchased last year could be rolled over to this summer or the purchaser could get a refund.

“We’ve had huge feedback,” Belcher said of season ticket sales. “I think people are ready to get out and enjoy the summer. We can’t answer the phone fast enough.”

Belcher said they’re planning a 50th birthday party for next Friday, the day before the park officially opens for the summer, from 2 until 9 p.m. Last year was supposed to be the anniversary but it was delayed by the pandemic.

This is a limited, special event in which people will have access to all of the park, she said.

“We’ve got a great laser show, one like you would see at Disney World, planned for the end of the evening,” said Belcher, who added that the birthday party will be the first of four special events celebrating the anniversary.

Some of Decatur’s lifeguards work at all three pools, but Parks and Recreation Director Jason Lake said Thursday they don’t have enough right now to open Carrie Matthews swimming pool in Northwest Decatur unless they’re able to hire more lifeguards.

While a $1.50 increase raised starting pay to $9 an hour, Lake said they have about 60 lifeguards hired so far when they usually start the season with between 80 and 110. However, the number hired could change as they work toward the Memorial Day weekend opening.

“We’ve got a lifeguard training planned for this weekend and more training scheduled for next week,” Lake said.

Belcher said she believes they could see an increase in applications for the jobs with school getting out and spring sports seasons ending.

Belcher said they would like to open the Carrie Matthews pool but they don’t plan to change the scheduled hours at Point Mallard or the Aquadome even if they get enough lifeguards. They want to have a buffer in numbers against any possible COVID-19 exposure, she said.

Lake said they reduced Point Mallard’s hours, cutting out the traditional two extra hours on Tuesdays and Thursdays, so the daily hours will be from 10 a.m. until 6 p.m., seven days a week. The park will still host private after-hour parties as in the past.

“We had to change it so we’re only running one (regular) shift,” Lake said.

Lacy Johnson, aquatics director at Hartselle Aquatic Center, said they had to reduce operation hours and cut back to six days a week, closing on Monday, because they are short on lifeguards too.

They reduced the daily hours by an hour so the pool won’t open until 11 a.m., except for Sundays when it opens at 1 p.m. The pool will be open until 7 p.m. on Tuesdays and Thursdays and until 5 p.m. other days.

Since Point Mallard is reducing hours again, it might be nice if they offered half price on a Saturday or Sunday. I won't hold my breath though.