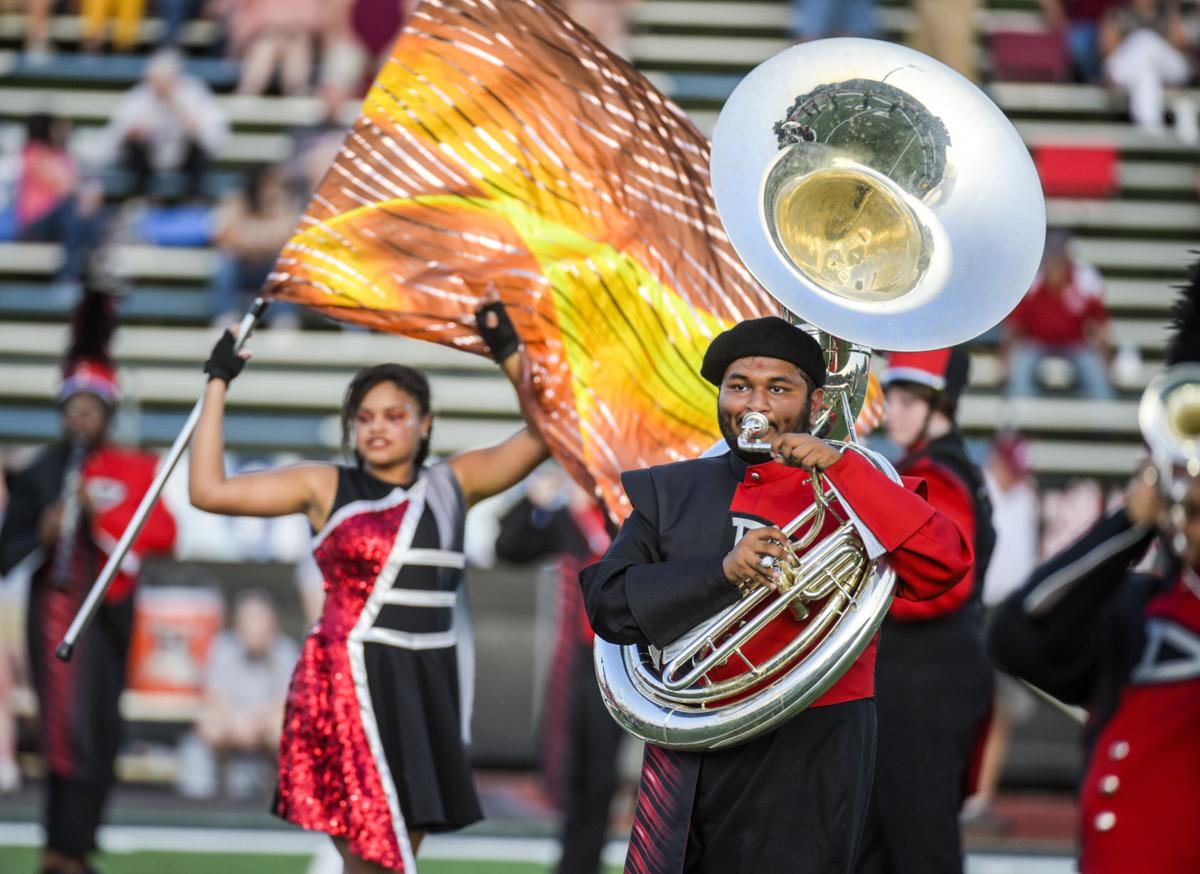 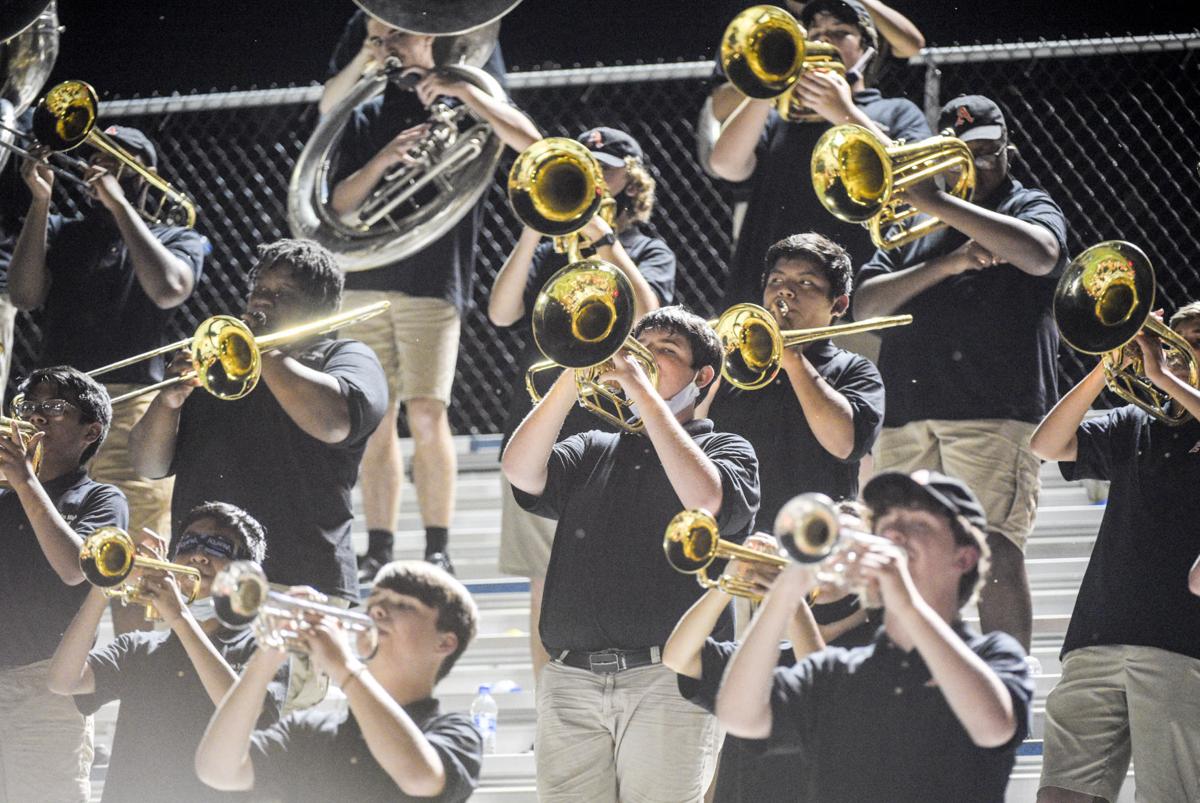 Band members at Decatur High and Austin High have dealt with revised show times, modified practices and uncertainty over competitions, but that hasn't kept them from making music at football games and enjoying it.

“There’s so much spirit and energy," said Decatur senior and drum major Jamar Echols. "At our game against Muscle Shoals, our two bands were playing songs back and forth and cheering each other on, and that’s what it’s all about at the end of the day."

Although the bands have continued to perform at football games this fall, it remains unclear if the students will get to perform in-person at competitions because of coronavirus precautions or will have to hope virtual competitions become available.

Austin High band director Clay Sloan said he’s not sure if schools that typically host competitions will hold them this year.

“It doesn’t look like it,” he said. “Basically every time I’ve reached out to those individuals, they’re waiting to make a decision, but I was told that the longer they wait, the more likely they’re not having a contest.”

Hartselle High has already moved its band competition to next year, according to Hartselle City Schools Superintendent Dee Dee Jones.

Sloan said instead of traditional band competitions, there is a possibility of virtual competitions in which the bands record and submit their performances to judges.

Both the Decatur and Austin bands perform their shows before games rather than at halftime, which administrators said helps minimize COVID-19 transmission by reducing movement throughout the stands at halftime. The shows also are done only for home games.

Yesh Patel, a senior and tuba player at Decatur High, said he enjoys that the modified schedule means he’s free during halftime.

“The only weirdness this year is definitely having our show played during pre-game, and playing stand tunes all game. The best part is having halftime off,” he said.

Baylee Followay, a senior majorette and French horn player at Austin High, said she and her classmates are adjusting to the season’s changes.

“We are still having fun and love putting on performances. Hearing that we may not get to do competitions this year makes me sad, but at the end of the day, we have to do the best thing that is going to keep our band healthy and safe as well as other bands,” Followay said.

Followay said she would be happy to participate in a virtual band competition: “That would be fine for us all because we just want to perform and will take every chance that we get.”

A pep band contingent from Austin and Decatur travels to away football games when permitted by the other school, as opposed to the entire band. Deputy Superintendent of Operations Dwight Satterfield said the opposing team’s school determines if a pep band is permitted, as well as how many students are allowed to travel.

“The band travel is up to the home team. We decide who gets to come to us and so forth. So we have put a limit on the number that they can bring based on our stadiums,” Satterfield said. He said the home school also determines the number of spectators and cheerleaders permitted to attend from the visiting team.

Sloan said all band members will have a chance to perform at away games, but he’s making his senior students a priority.

“(Last) week, I was told … when we go to Sparkman, they’re going to allow fewer members than they had planned on taking, so we’ll prioritize the seniors,” Sloan said. Austin's game at Sparkman is scheduled for Friday.

Sloan said the season has come with challenges; sometimes students have been placed in quarantine due to COVID-19 exposure, so there has been less continuity than usual for rehearsals. Sloan said his students are doing well given the circumstances.

“Everybody at some point has been frustrated with the limitations that we have faced,” he said. “I’ve just viewed it as, every day we can get together and play our instruments is a day we can get better. We’re kind of having to look at it through a different lens than normal. … They’re playing quite well, especially considering it’s sporadic; sometimes we have to (spend) some time away, but as we get days in a row we’re seeing real improvements.”

“Since our first incident, I don’t think we’ve had any positive cases of students in our band,” he said.

Sloan said this year’s performances have been altered to be more “crowd appealing,” and that the band is covering less material than usual this season.

“We’re doing a little less material than we normally do, but we really made good progress on it, and actually we’ve made faster progress than usual,” Sloan said. “It’s gone really well.”

The Decatur band is also progressing well, Echols said. He said the band had a smooth start to the season compared to other schools in the area, including one that didn't have band camp, and its performances have been high-energy.

Christa Terry, a senior at Decatur High who plays the flute and piccolo, said she’s impressed with her band-mates for working through the less-than-ideal circumstances of the season.

“I am very proud of everyone in band because we have all worked extremely hard to make the show as amazing as we can,” she said. “We were not able to do a majority of our summer band practices because of the coronavirus, but we were able to still have a two-week-long band camp.”

Brittney Gonzalez, a senior and saxophone player at Decatur High, acknowledges measures to prevent the coronavirus have put a damper on her senior year even though she’s grateful that band season proceeded.

“As a virtual student and a senior this year, it is a little disappointing for me, having to go through a lot of the changes because of COVID-19,” she said. “I’m just glad band is happening this year for us, because I know a lot of other schools aren’t having band and football games. I’m just trying to have all the fun I can this year with precautions, of course.”

Echols’ main frustration this season is the impact social distancing has on the band’s timing.

“The hardest part is having to separate,” he said. “As musicians you want to be close to really feel the music. Not being able to do that poses a lot of challenges with timing on the marching field.”

Janet Mendoza, a junior saxophone player in the Decatur High band, said the pandemic has helped the Decatur band become a tighter-knit group.

“I think from the past years, this year has brought us all together. In many ways, we’re closer as if we were a family, because we are,” Mendoza said.