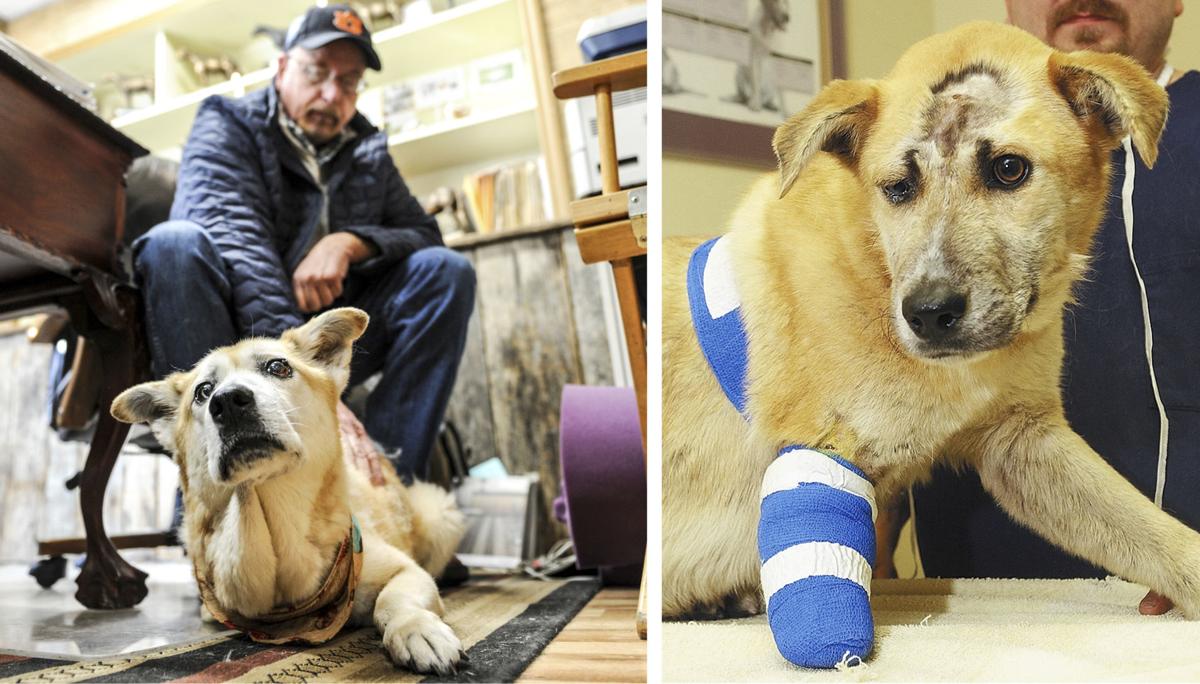 In the image on the left, Lucky rests Tuesday in Dr. Steven Osborne’s office. On the right, a picture taken on Feb. 23, 2006, shows Lucky’s condition the day after he was found in a garbage bin badly injured. [JERONIMO NISA/DECATUR DAILY and JOHN GODBEY/DECATUR DAILY FILE] 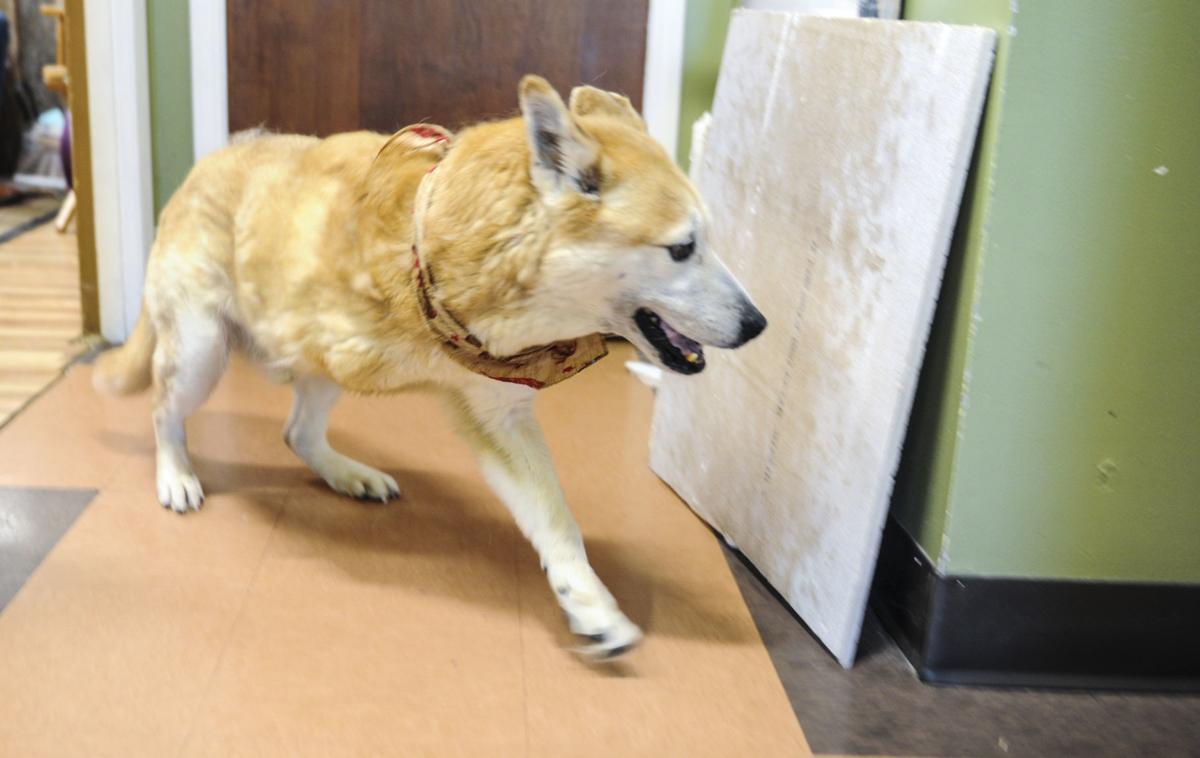 Lucky walks through the hallways of Osborne Animal Clinic on Tuesday. His right front leg had to be amputated after he was found in a plastic garbage bag placed in a dumpster in 2006. [JERONIMO NISA/DECATUR DAILY]

In the image on the left, Lucky rests Tuesday in Dr. Steven Osborne’s office. On the right, a picture taken on Feb. 23, 2006, shows Lucky’s condition the day after he was found in a garbage bin badly injured. [JERONIMO NISA/DECATUR DAILY and JOHN GODBEY/DECATUR DAILY FILE]

Lucky walks through the hallways of Osborne Animal Clinic on Tuesday. His right front leg had to be amputated after he was found in a plastic garbage bag placed in a dumpster in 2006. [JERONIMO NISA/DECATUR DAILY]

The puppy that survived after being found severely injured in a Decatur dumpster and captured the community's heart is nearly 15 years old, and is still attracting visitors at the clinic of the veterinarian who treated him.

The puppy, who was named Lucky, was found at about 8 a.m. on Feb. 22, 2006, in a dumpster on Central Parkway by a city Sanitation Department employee, who then called Decatur Animal Services, according to Osborne. An animal control officer, Dwight Roper, responded and called in Danny Melson, who was the Animal Services interim director at the time.

Lucky, found in a back corner of the dumpster in a plastic garbage bag with duct tape around his mouth, was taken to Osborne Animal Clinic. Cold and in shock, Lucky’s right front leg had multiple fractures and tissue damage, and was held by a few pieces of skin, said Osborne. He performed emergency surgery immediately, then a complete amputation several days later.

“We named him Lucky because we felt that he was lucky to be alive,” said Osborne, who determined that the dog was about six to eight months old. “I don’t know if he would have survived there much longer.

“We have a real desire here to fix things that don’t look good from the onset,” he said. “I thought we had a chance to save him.”

There was an “amazing amount of attention” for Lucky’s story well into the summer of 2006, Osborne said. It was covered by The Decatur Daily, whose articles were picked up by The Associated Press, and by local TV stations that broadcast live updates from the front yard of the clinic. An “Inside Edition” crew interviewed Osborne at his home, where Lucky stayed until Osborne decided he would live at the clinic, despite numerous offers to adopt him.

Kayla Davis, a receptionist at the clinic, said people, and not just clients, still ask about and visit Lucky daily.

For years after Lucky's ordeal, travelers from northern states headed to the Gulf would take a detour into Decatur, just to sit and visit with Lucky.

“Living here has been good for him,” Osborne said. Though Lucky spends much of the day sleeping, “he still enjoys meeting people. He still interacts with other dogs.”

Lucky has been less active in the last year, though, after the death of River, a dog that Osborne found on U.S. 31 and rescued, and that lived at the clinic for 10 years.

“We established a reward that day (Lucky was brought in) for $500” for information leading to the owner’s arrest, “and that reward grew to over $20,000,” Osborne said. Some of the reward money helped other abused dogs.

Lucky's former owner, convicted of second-degree cruelty to a dog and falsely reporting the theft of a dog, both misdemeanors, was ordered in 2007 to pay $4,000 in fines plus court costs and restitution.

“Lucky has become an advocate for the city of Decatur and Decatur Animal Services and the system we have in place to take care of animals,” Osborne said.

And adjacent to the clinic is a facility that Osborne opened this year that bears the clinic pet's name: Lucky Dog Daycare.

“We wanted to honor him going forward,” Osborne said.