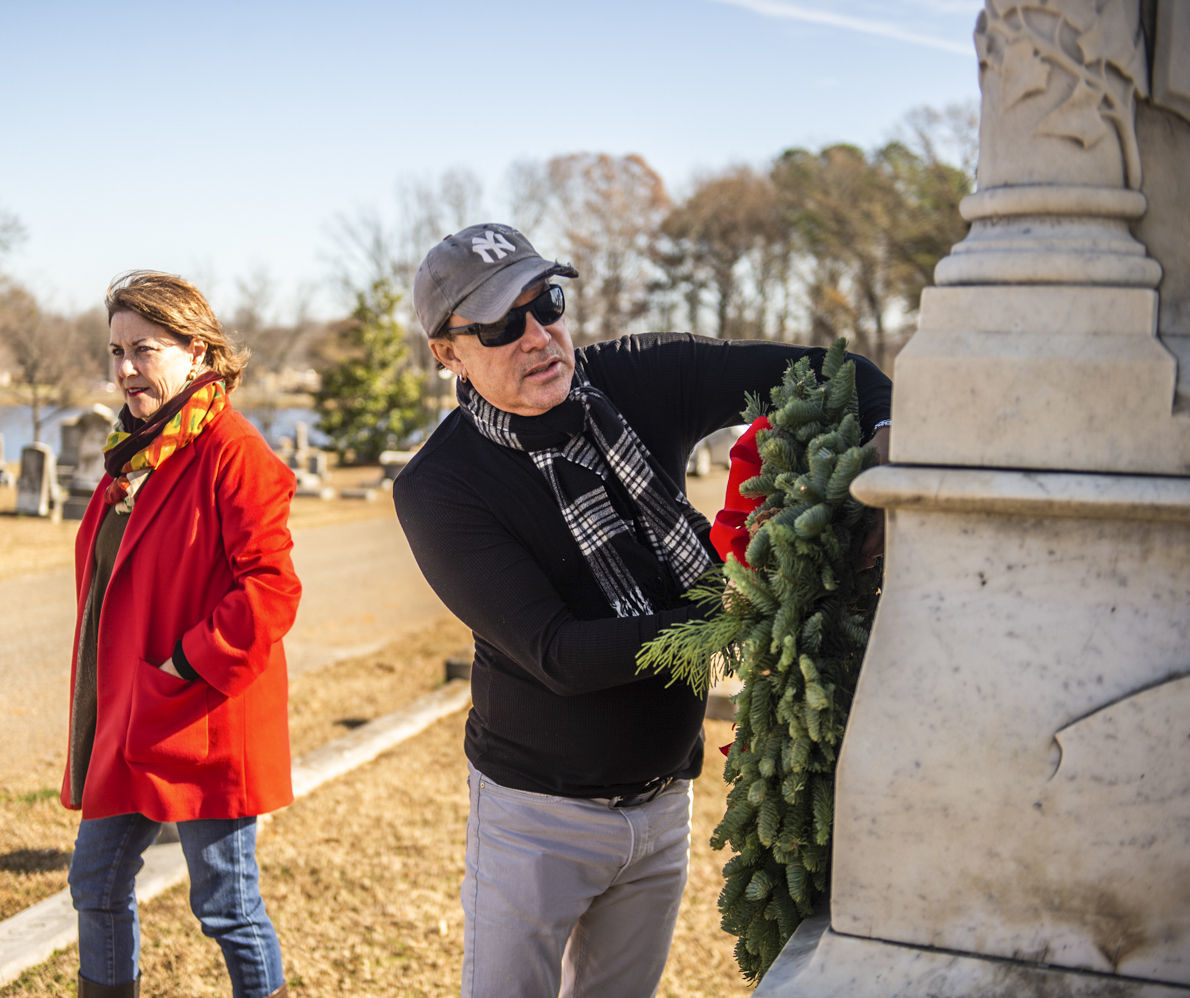 DeLoain Burgess, right, places a wreath on a monument at Decatur City Cemetery on Wednesday in preparation for a free luminary tour Dec. 14-15. [DAN BUSEY/DECATUR DAILY] 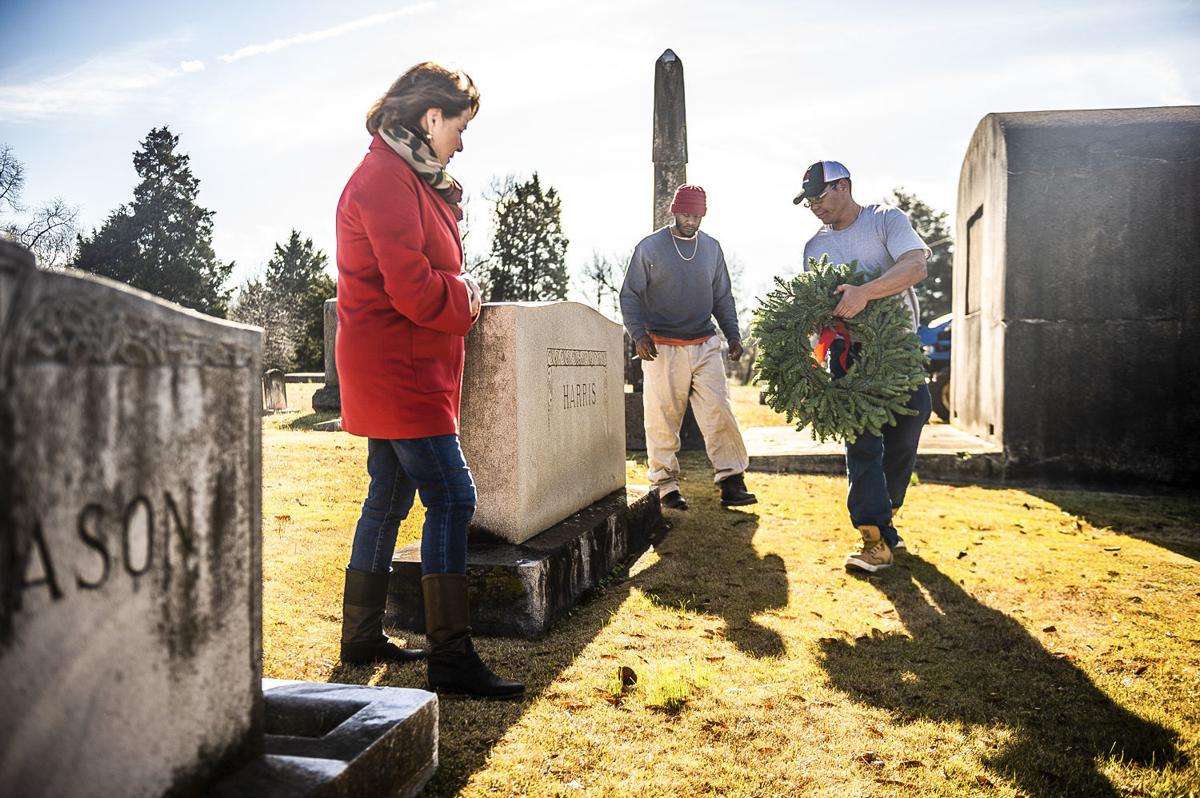 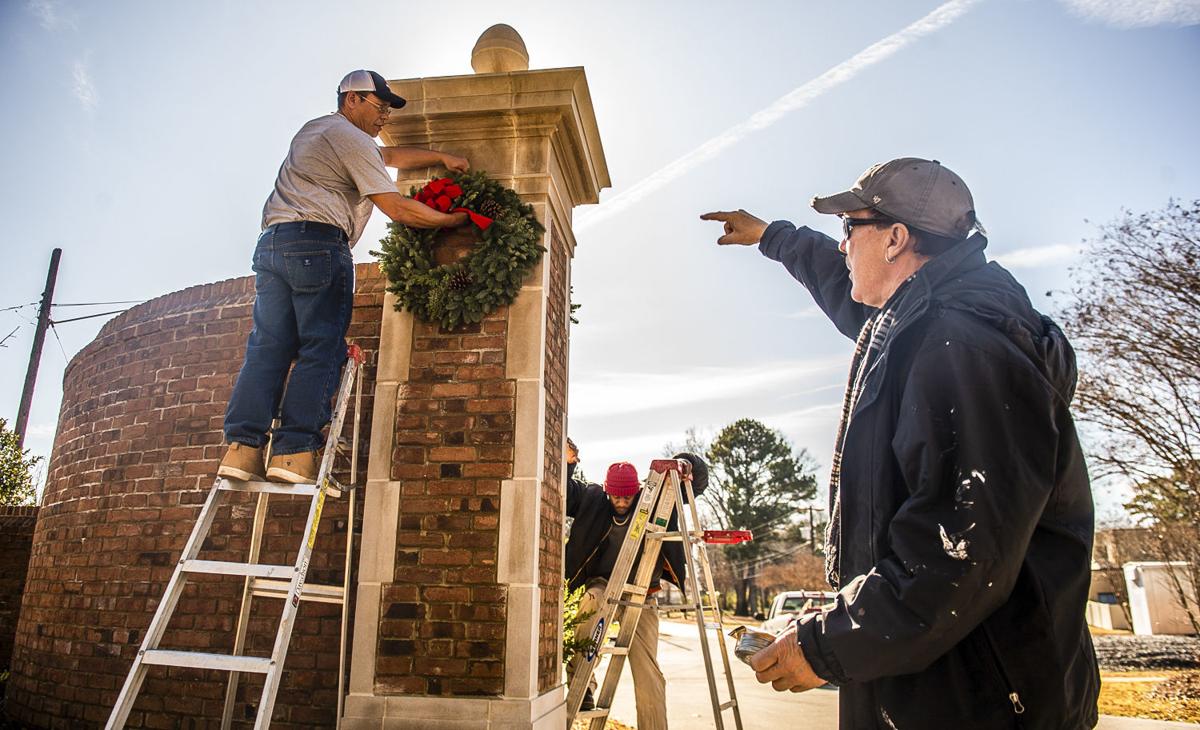 DeLoain Burgess, right, places a wreath on a monument at Decatur City Cemetery on Wednesday in preparation for a free luminary tour Dec. 14-15. [DAN BUSEY/DECATUR DAILY]

Months of preparation have gone into next weekend's luminary tour of the Decatur City Cemetery, which will feature a live Nativity scene, live bands, 150 wreaths and thousands of lights, organizers said.

A part of the Historic Decatur Christmas Tour of Homes this year, the cemetery tour will be from 3 to 8 p.m. Dec. 14 and 15. The tour of homes will be Dec. 14 only.

Historical features on the cemetery tour will be the yellow fever memorial; Civil War burial site chapel; the 1855 grave of Maria Ford, which is the oldest known grave in the cemetery; the grave site of O.C. Ludwig, former Arkansas secretary of state; and Miss Kate’s grave site. Kate Lackner was the legendary Bank Street brothel madam who left her husband and son for riverboat Capt. Simp McGhee.

There will also be a 50-foot live tree decorated with more than 10,000 lights, Burgess said.

Burgess said about 35 volunteers are working to make the tour a success. More than 3,500 luminary bags, 600 candles and 16-foot angels will be on display. Burgess said it will be an easy 10-minute drive flowing one way from the Alabama 20 entrance to Memorial Drive or about a 30-minute stroll.

“Just after dusk will be the optimum time to tour,” he said. “You’ll be able to enjoy the lights when it begins to get dark. We’ll have spotlights on some of the featured areas.”

Burgess said he will have 11 informational signs along the pathway. "There will be no guides," he said.

“The beauty of the park and its history ... is a unique piece of Decatur’s culture,” said Cindy Baker Strickland, chairwoman of the Decatur Cemetery Legacy Society. “All of our history is at the cemetery. Our goal is to get more people out to the cemetery. We see it as a park, a place of joy, not one of sadness.”

Her family’s private foundation, the Baker Foundation, and private donations are picking up the bulk of the costs for the tour, which total about $5,000, she said.

“It’s our legacy to Decatur,” Strickland said. “Our parents and grandparents are out there, and we want to do this to honor them.”

The cemetery is a public area and no admission fee is charged. “The Christmas Tour of Homes allowed us to be part of its event this year, and we’re so very pleased,” Strickland said.

Fellow board member Trudy Grisham said the cemetery tour will enhance the tour of homes.

“We’ve been working to improve the cemetery for the past two years or so and the (luminary) tour has wonderful timing joining the home tour,” she said.

Burgess said he anticipates the cemetery tour will become an annual event.

I have an aunt who is buried there. She died when she was a child. Who should I contact to find out where her grave is.