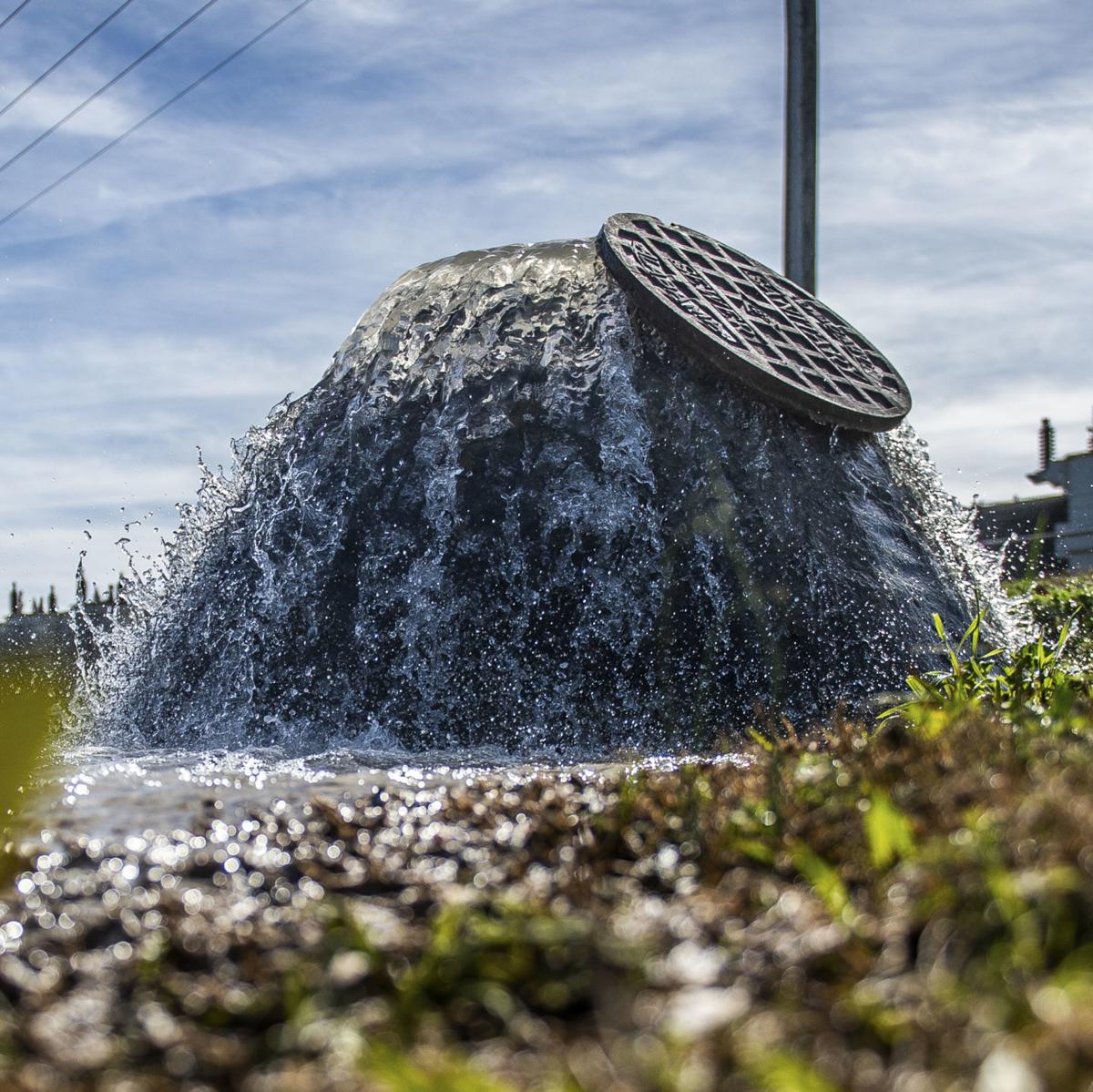 A manhole off of Central Parkway Southwest in Decatur gushes with untreated sewage Feb. 25. Between 5.5 million and 7.1 million gallons have overflowed from Decatur Utilities sewer pipes in the last 12 months, according to DU environmental filings. [DAN BUSEY/DECATUR DAILY FILE] 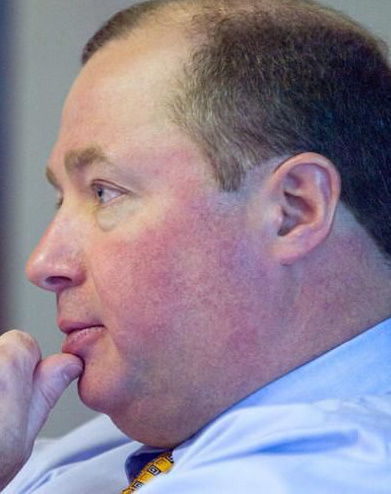 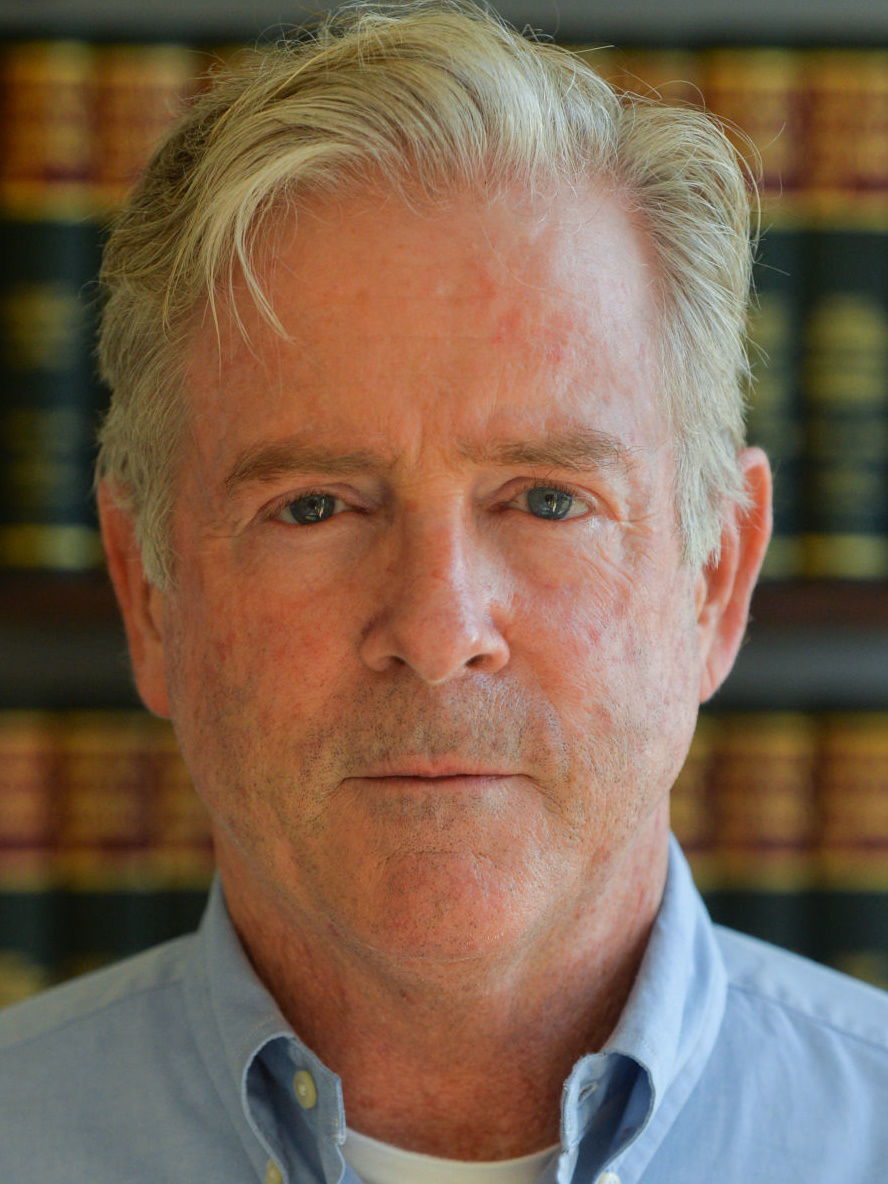 An overflow last week raised the 12-month total of untreated sewage that has escaped the Decatur Utilities sanitary sewer system to as many as 7,145,932 gallons in 69 separate overflows.

The sewage is received by Wheeler Reservoir and its tributaries.

DU Water Resources Manager Tom Cleveland last week blamed much of the problem on heavy rains in February, which accounted for 44 of the overflows. But nearby utilities that received similar amounts of rain fared far better in terms of overflows.

And even Huntsville, with a sprawling 1,400 miles of sewer pipe and six separate treatment facilities, had only 55 overflows in the last 12 months — 14 fewer than Decatur with its 374 miles of sewer and one treatment plant.

The overflow numbers are self-reported by the utilities to the Alabama Department of Environmental Management. The volume of the overflows is sometimes reported as a range. Assuming the lowest end of the range on each such report by Decatur Utilities, it had overflows in the last 12 months of at least 5,530,932 gallons. The bodies of water that received the discharges were Wheeler Reservoir, Flint Creek, Bakers Creek and Dry Creek.

The overflows present a health hazard, according to ADEM and the Environmental Protection Agency.

“Because sanitary sewer overflows contain raw sewage they carry bacteria, viruses, protozoa (parasitic organisms), helminths (intestinal worms), and inhaled molds and fungi,” according to an EPA advisory. “As a result, they may cause diseases ranging in severity from mild gastroenteritis (causing stomach cramps and diarrhea) to life-threatening ailments such as cholera, dysentery, infectious hepatitis, and severe gastroenteritis.”

DU’s largest reported overflow in the last 12 months was 1,670,632 gallons on Sixth Avenue Southwest a block from Aquadome Recreation Center in February, followed by one on Woodmont Drive Southeast estimated at 750,000 to 1 million gallons. In September, 284,172 gallons spewed from a manhole on Old Moulton Road Southwest near McEntire Lane.

Cleveland said DU’s overflows may be inflated in comparison to other utilities because he believes DU crews are more proactive in seeking out problem areas during heavy rain. An overflow that might go unreported in some cities, he said, is detected by DU crews, leading to a report being filed with ADEM.

A challenge faced by DU is the age of the infrastructure, Cleveland said.

“Decatur is a very old city and still has a lot of clay pipe in the ground. It takes time and money to replace it,” he said.

Clay pipe is brittle, and can fracture with minor shifts in the ground. A broken pipe can discharge sewage, and it also can allow the infusion of water that overwhelms the system’s capacity.

“Inflow and infiltration, as it is known in the wastewater industry, is the result of groundwater or stormwater runoff entering the sanitary sewer collection system by way of cracks, holes, loose joints, broken pipe, leaking manholes or other pipe defects due to system age. This is especially prevalent in older clay pipe that was installed in years past,” Cleveland said.

Other issues that contribute to sewer overflows, according to Cleveland:

• Fats, oils and grease placed in the system by customers

Cleveland stresses that DU is working to reduce the number of overflows, with a concerted effort beginning in February 2013 when it presented a 10-year wastewater system improvement plan to ADEM. Since then, it has replaced six sanitary sewer lift stations. In fiscal 2018, according to its most recent annual report, DU replaced 4.4 miles of sewer main.

Cleveland said clay pipe is typically replaced with high-density polyethylene or ductile iron pipe. Sometimes DU is able to insert a liner inside clay pipe to prevent sewage from escaping and groundwater from entering.

DU also has an ongoing sewer inspection program using video cameras that are run through the pipes. It inspected 23.4 miles of pipe in fiscal 2018, according to its annual report. Cleveland said the utility has invested $60 million over the last 10 years in improving its wastewater system infrastructure.

"DU disagrees with any assertion that it is not aggressively addressing SSOs (sanitary sewer overflows)," he said. "DU would like for our customers to know that we take any SSO very seriously. ..."

Improving the system is expensive. The Stratford Road Southeast lift station replacement in 2018, for example, cost $3.5 million. The most recent significant overflow — a 34,250-gallon discharge Dec. 1 on Sherwood Drive Southeast — resulted from damaged pipe. No estimate was available on the repairs, but the pipe is 17 feet deep, so the expense will be significant.

DU spokesman Joe Holmes said the utility has the lowest combined bills in the state when water, sewer, electric and gas are factored in.

“We’re proud of that, to have an excellent system and low rates,” he said.

The quest for low rates is not adequate justification in ADEM’s view, which along with the Attorney General’s Office filed suit against DU in May. The lawsuit claims DU is liable to the state for up to $25,000 per violation, and it lists hundreds of overflow violations going back to 2014.

The complaint also alleges DU has failed in its legal obligation to timely notify the public of many of the overflows.

Finally, the complaint alleges the overflows contributed to high levels of E. coli in water discharged into the Tennessee River.

In October, Morgan County Circuit Judge Charles Elliott allowed Tennessee Riverkeeper to join the lawsuit against DU. The nonprofit alleges the sewer overflows “demonstrate a continuing pattern of pollution which degrades and threatens waters of the United States in violation of the Clean Water Act and state law.”

“This one was a surprise, because the new pump station has resolved a lot of issues on this side of town,” said Allen Stoner. “It never got to our side of the street, and DU was out there immediately with their trucks to inspect it and then they spread lime on it. There was definitely an odor though. For a couple of days we were like, ‘Wow, this really stinks.’ ”

Hmmm. Maybe this is one reason the water tastes so bad?