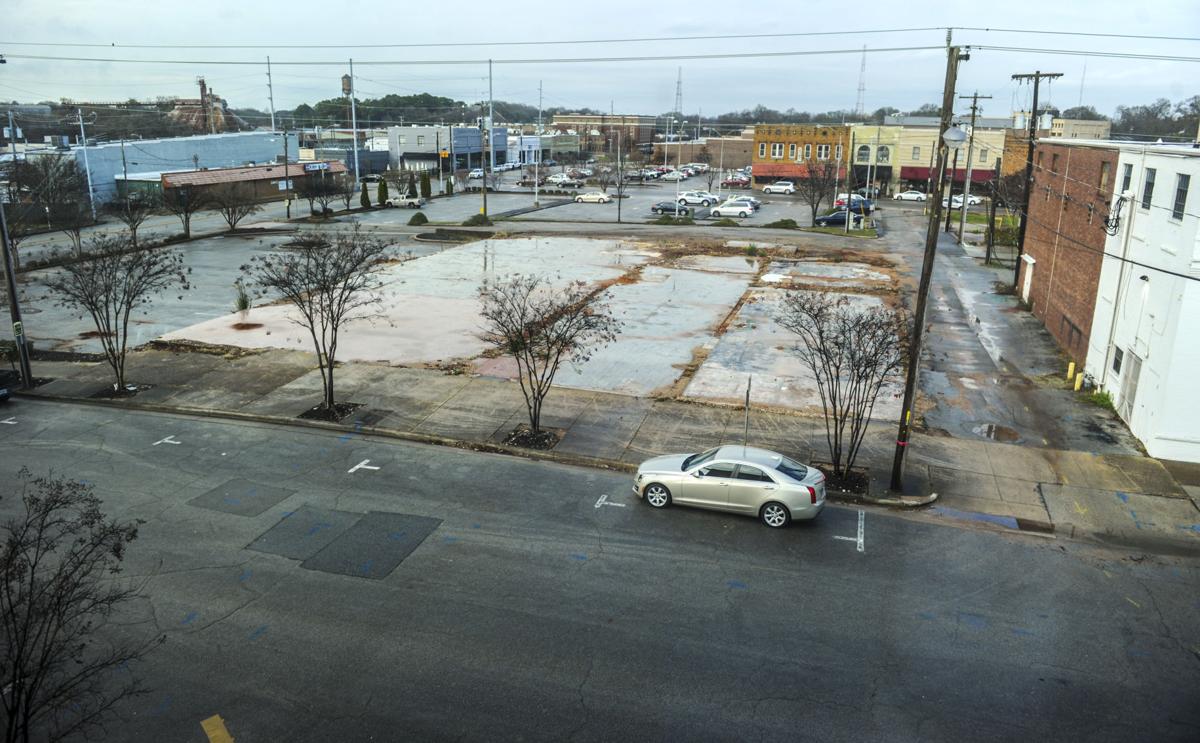 New dorms for the Alabama Center for the Arts will go on the property at the bottom of this photo, just north of Johnston Street Southeast. To the north of the dorms is a city parking lot earmarked to become a parking deck that will be bordered on the north by East Moulton Street. First Avenue Southeast is on the west side of the properties. [JERONIMO NISA/DECATUR DAILY] 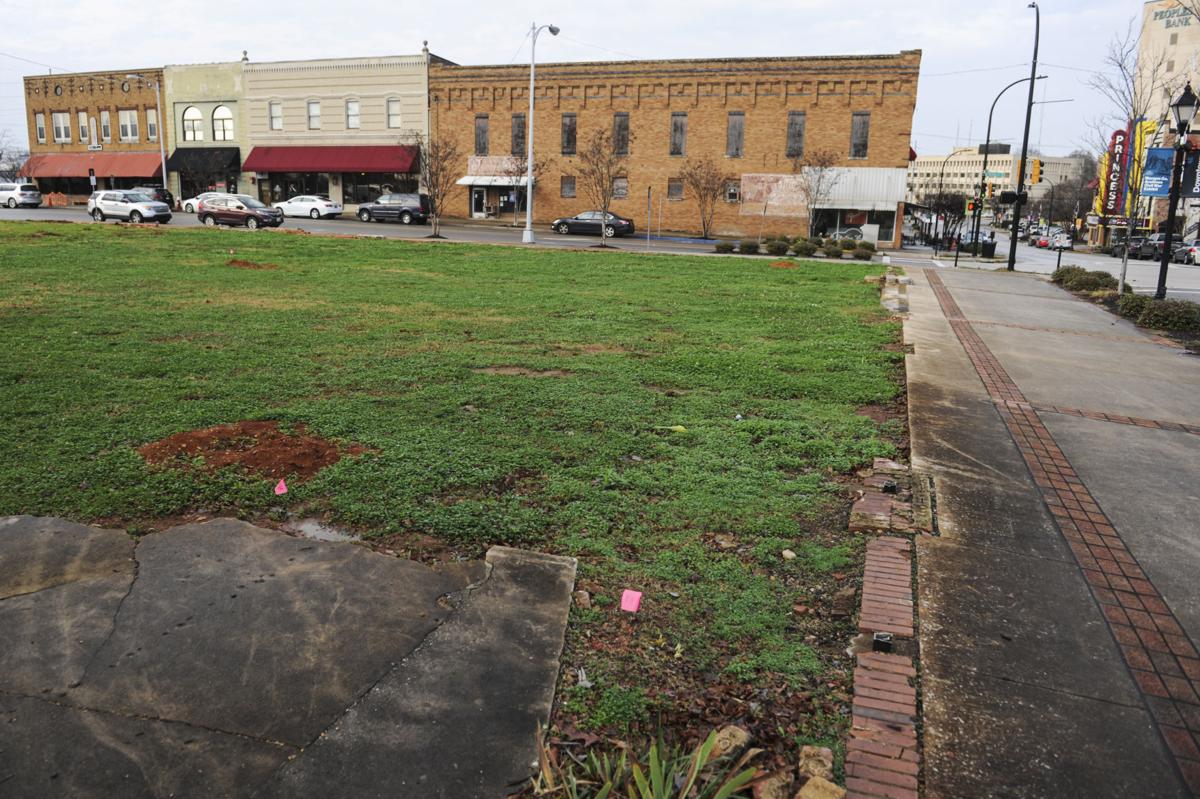 Construction could begin in April on a hotel at Second Avenue Southeast and East Moulton Street. [JERONIMO NISA/DECATUR DAILY] 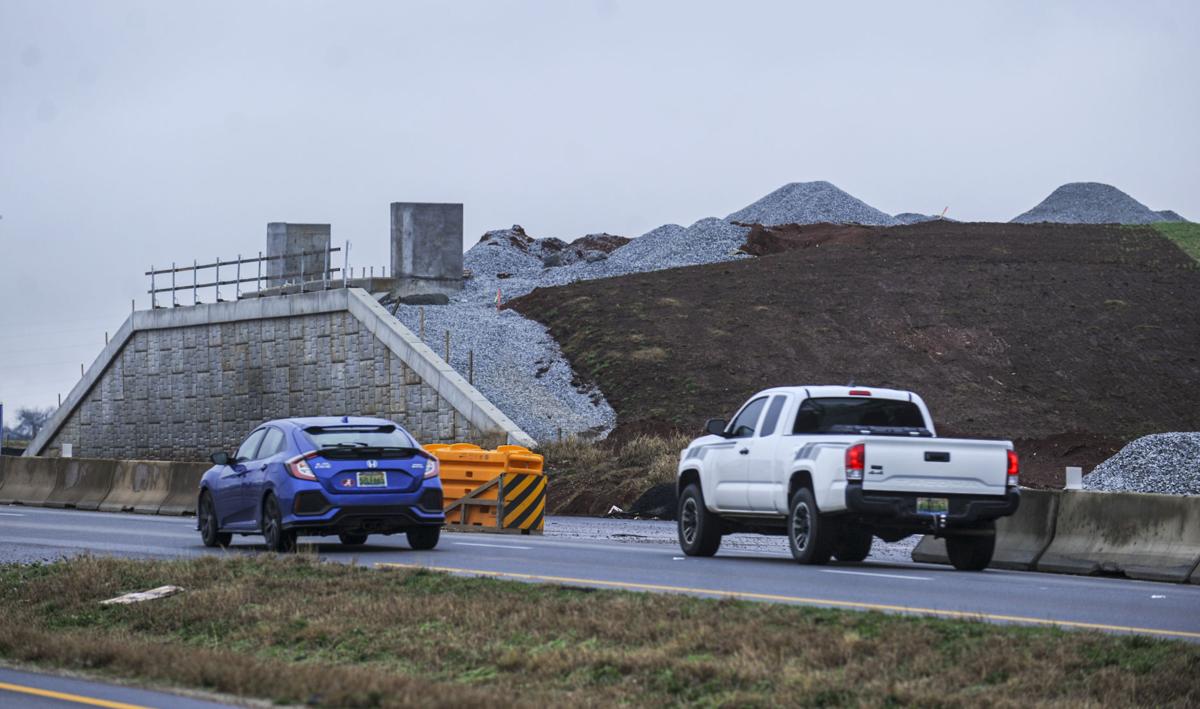 Construction on the Alabama 20 overpass is about 40% complete and on track for completion this summer. [JERONIMO NISA/DECATUR DAILY] 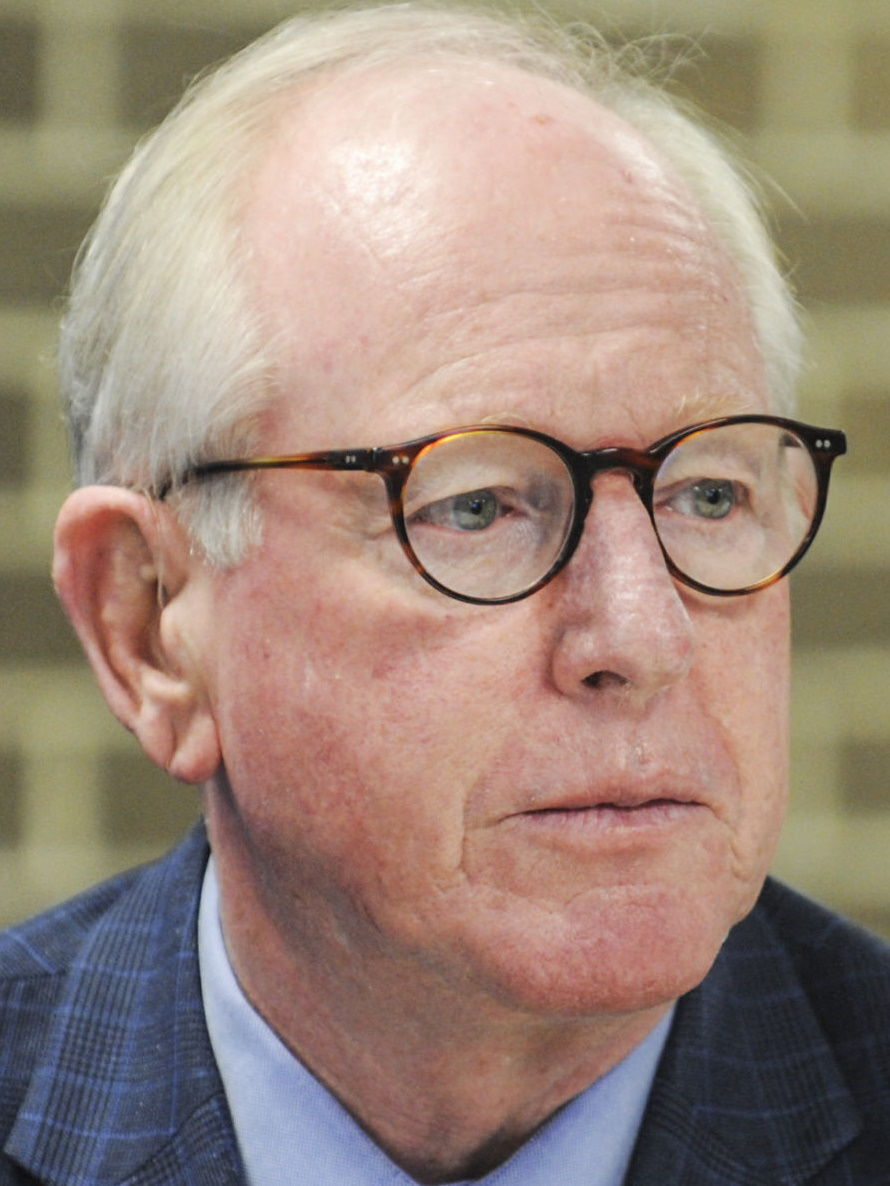 New dorms for the Alabama Center for the Arts will go on the property at the bottom of this photo, just north of Johnston Street Southeast. To the north of the dorms is a city parking lot earmarked to become a parking deck that will be bordered on the north by East Moulton Street. First Avenue Southeast is on the west side of the properties. [JERONIMO NISA/DECATUR DAILY]

Construction could begin in April on a hotel at Second Avenue Southeast and East Moulton Street. [JERONIMO NISA/DECATUR DAILY]

Construction on the Alabama 20 overpass is about 40% complete and on track for completion this summer. [JERONIMO NISA/DECATUR DAILY]

A highway overpass, a downtown parking deck, a college dorm and new subdivisions will dramatically transform Decatur’s appearance in 2022 and continue into 2023.

The city government enters the new year in a strong financial position. It finished fiscal 2021 with $20 million in its unassigned fund reserves and $10.8 million in COVID-19 relief funds. Additionally, the City Council took advantage of historically low interest rates and began the process of borrowing $20 million on the bond market.

That makes $50.8 million available for city officials, who plan to use much of it on capital projects. And that total doesn’t include money from the legal settlement with 3M Co. or a $14.2 federal BUILD grant the city is using for the construction of a roughly $18 million overpass at Alabama 20 in Limestone County.

The city is also benefiting from private investment. Decatur has 10 subdivisions, with more than 600 homes, and two town home developments either under construction or in the city planning process.

Mayor Tab Bowling said the construction Decatur will experience in 2022 could rival the Mayor Gilmer Blackburn era in the late 1960s and early 1970s when the city built a new City Hall, Point Mallard Park facilities and three recreation centers.

“A lot of great things are getting started in 2022, and we want to do it at the speed of right,” Bowling said.

Bowling said Decatur isn’t the only north Alabama city experiencing a surge of growth, but he’s glad his city is sharing in the economic prosperity. He credited the City Council for putting Decatur in this position with “a mentality in which they trust our business development team and they’re making good business decisions.”

Construction on the Alabama 20 overpass began last spring, and City Engineer Carl Prewitt said about 40% of the work is done, putting its completion on track for this summer.

Prewitt has said the overpass is being built to enhance safety for motorists, but Bowling said a primary objective is to enhance economic development. The mayor said the city will need to look at improvements to Bibb-Garrett Road once the overpass is complete.

Bowling said the overpass is creating a lot of interest in retail development along Alabama 20, so much so that he expects major development in this area north of the Tennessee River.

“This area is as big as Southeast Decatur,” Bowling said.

Terry said they tweaked the first half of the rewrite after it was presented to the public in 2019, and now they’re preparing for an unveiling of the entire new ordinance proposal.

The Planning Department intends to start public involvement in the zoning rewrite in the early spring and seek adoption by the City Council midway through of the year, Terry said.

Bowling said part of the rewrite will establish zoning for the portion of the city in Limestone County. He said he anticipates this area having retail development along Alabama 20, residential areas surrounding the retailers and light industry along the railroad tracks that run parallel to the highway.

The mayor said the city would need a Fire Station No. 9 if there’s “any kind of significant development” in Limestone County. Fire Chief Tracy Thornton is looking for land on which to build a new fire station that Bowling said should also include a police precinct.

Bowling said City Council members have told him they want to use the $10.8 million in COVID-19 relief money to pay for infrastructure, such as extending sewer service to areas that would help city growth.

“It should take about a year,” Fite said.

The city agreed as part of the deal to attract the hotel that it would build an estimated $6 million, 250-space parking deck adjacent to the hotel on the corner of East Moulton and First Avenue Southeast.

“We’ll probably start the parking deck in the first of the year,” Bowling said. “And our contractor will work in harmony with the hotel contractor.”

A portion of the $20 million bond revenues will pay for the deck. To repay the debt service on the parking deck, the city will use portions of the lodging and hospitality taxes and begin charging for downtown parking, Chief Financial Officer Kyle Demeester said.

On the southern side of the parking deck, the Alabama Community College System plans to build a dorm off Johnston Street Southeast for Alabama Center for the Arts students.

Local engineer and Community College board member Blake McAnally said an architect is working on the plans and construction should begin early this year, but the dorms likely won’t be finished until 2023.

A major decision that city leaders will have to make in early 2022 involves the fate of Carrie Matthews Recreation Center, which has foundation problems and could cost $2.5 million to $4 million to renovate. The city has about $1.5 million budgeted for Carrie Matthews.

Bowling said the city is talking to the Decatur Housing Authority about the availability of its property across Memorial Drive Northwest from the current Carrie Matthews facility. The city would like to use this property for either a new Carrie Matthews Rec Center or a new home for Decatur Youth Services.

A major development in 2021 was the $98.4 million settlement with 3M Co. over chemical contamination of properties throughout Decatur and Morgan County. Included in this settlement is $35 million designated for new recreation facilities that would replace the Aquadome Recreation Center and its ballfields, which sit over a closed municipal landfill that a state agency says contain PFAS-contaminated 3M waste. The settlement includes an additional $7.2 million for the city to "support and promote community development and recreation."

City Council President Jacob Ladner said funds for a new DYS home would have to come from the settlement money or the city’s general fund.

The city plans to use a large portion of the $35 million to build a recreation center that would replace the Aquadome and anchor a proposed Decatur Commons project between West Moulton Street and Finley Drive and along Dry Creek in Northwest Decatur.

The city began purchasing land for the Decatur Commons project just before Christmas and still needs to acquire more than a dozen properties for it. The land will have to be tested for environmental issues and structural suitability before the project can proceed.

Bowling said he doesn’t want the new center to compete with private fitness clubs. He said there may be an opportunity to work with the YMCA on programs for the new center.

The city is still looking for a new location for ballfields to replace those lost at the Aquadome, the mayor said.

Bowling said he asked Parks and Recreation Director Jason Lake and his team to look at the Point Mallard Ice Complex and provide an update on estimated costs to repair the ice rink.

The City Council plans to use $8 million to $10 million from the bond issue on the Sixth Avenue streetscape plan that’s intended to beautify this northern entrance to the city.

Bowling said before Christmas that design on the project “will probably take another eight months, and then the project will take about 12 months.” The council recently approved agreements to move the utilities underground along the 1-mile stretch of Sixth Avenue planned for the streetscape — from Prospect Drive Southeast to the Hudson Memorial Bridges.

Bowling said the City Council also is discussing adding more paving to the $1.26 million in resurfacing that’s budgeted for fiscal 2022.

Prewitt said there are a number of road projects planned for 2022. Wiregrass Construction won the contract with a bid of just over $1.8 million on the project to realign the Central Parkway and Sandlin Road intersections on Beltline Road.

Funded by ATRIP II money, the project will enable drivers to make permissive left turns from the Beltline at the two intersections when they have a green light after a controlled turn by a green arrow.

“This should start this spring,” Prewitt said.

The city received $950,000 in federal money through the Alabama Department of Transportation to pave Church Street from Somerville Road to Grant Street. Prewitt said work on this approximately 1-mile stretch of road that passes in front of the Bunge plant likely won’t start until the fall.

The widening of Shady Grove Lane near Austin High School began this past fall and should finish up this spring, Prewitt said.

Prewitt said he is working on an application to the state to add a lane on the southbound portion of Old Moulton Road at the intersection with Beltline Road.

“The traffic really backs up there so we need a dedicated left turn,” Prewitt said.

The City Council recently approved an application to get money from the state’s “Rebuild Alabama” fund to add lights on the river bridge and U.S. 31 causeway, Prewitt said.

Would the hotel have its own parking spaces or would they use the parking deck?