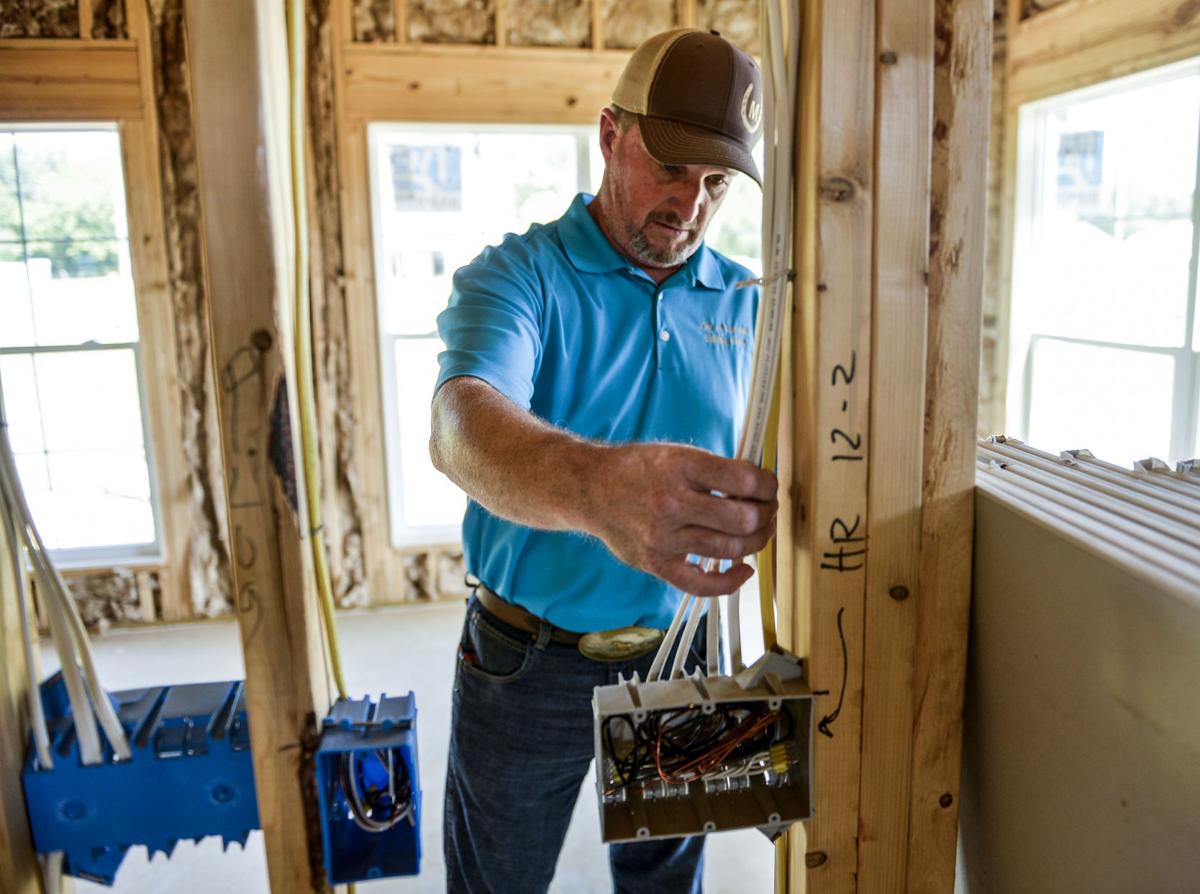 Chris McAbee inspects the electrical installation in a house under construction in the Old River Manor subdivision this month. As Decatur promotes residential development, the city Building Department is trying to help builders by conducting inspections in a timely manner and heading off issues that could delay a project or have to be redone. [JERONIMO NISA/DECATUR DAILY] 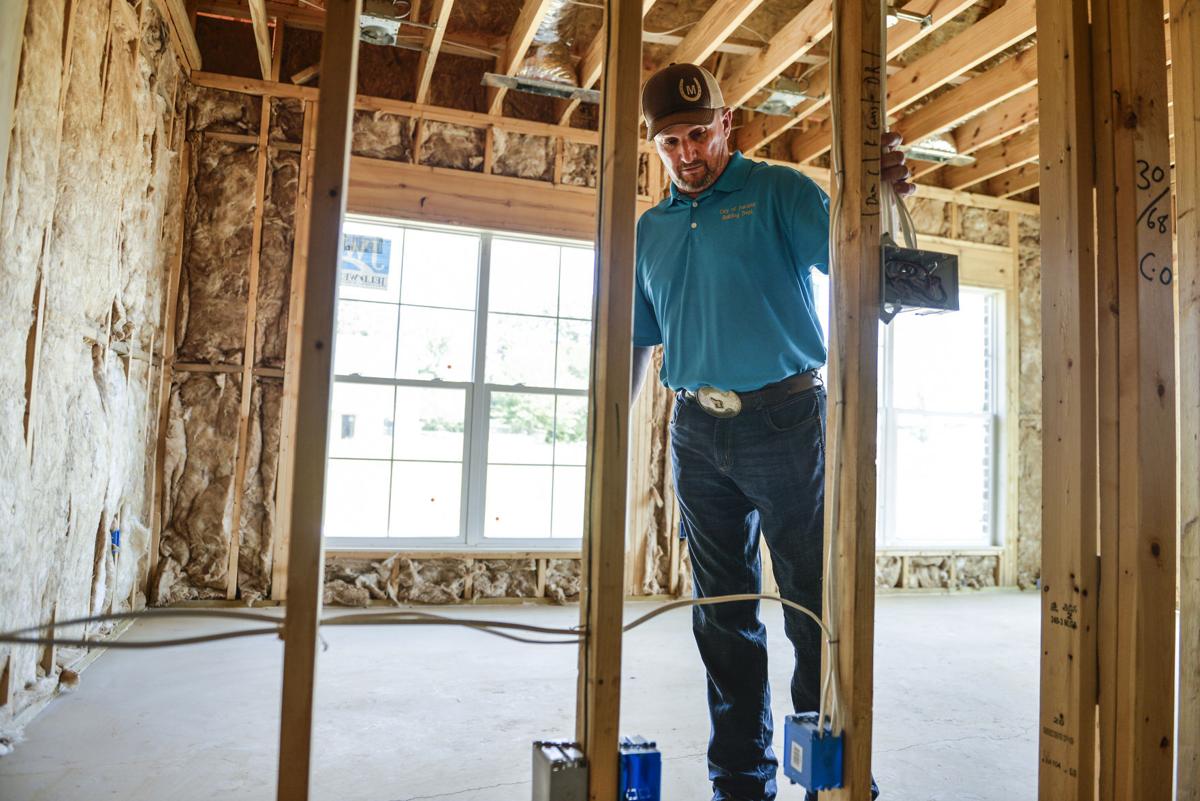 Chris McAbee inspects the electrical installation in a house under construction in the Old River Manor subdivision this month. Decatur's Building Department is seeing its reputation among builders improve just as the city makes a major push to increase residential development. [JERONIMO NISA/DECATUR DAILY]

Chris McAbee inspects the electrical installation in a house under construction in the Old River Manor subdivision this month. As Decatur promotes residential development, the city Building Department is trying to help builders by conducting inspections in a timely manner and heading off issues that could delay a project or have to be redone. [JERONIMO NISA/DECATUR DAILY]

Chris McAbee inspects the electrical installation in a house under construction in the Old River Manor subdivision this month. Decatur's Building Department is seeing its reputation among builders improve just as the city makes a major push to increase residential development. [JERONIMO NISA/DECATUR DAILY]

At a time when Decatur is trying to encourage residential development, the city Building Department has acquired a new reputation as helpful, local builders say, but some contend its previous image as difficult to deal with resulted from misperceptions.

The 10-person department approves residential and commercial construction plans and follows up with inspections to make sure the work meets city codes, which can put it in conflict with those in the construction business.

“The Decatur Building Department is 100% better” in a job that can be difficult at times because they’re often forcing people to do things they don’t want to do, said Jack Fite, president of Fite Building Co.

“They’re worker friendly,” Fite said. “They try to help building and home owners. They try to work with the builder from start to finish.”

“Those guys will work with the builders in helping them in solving issues when before they had an attitude that it was my way or the highway,” Pate said.

The willingness of builders to work with Decatur's Building Department could be pivotal to efforts aimed at increasing housing inventory to promote population growth. The city went almost two decades with little change in population, and added 2,255 people between the 2010 and 2020 U.S. censuses.

Residential growth is a major emphasis on the One Decatur comprehensive plan approved in 2018, and the Decatur-Morgan County Chamber of Commerce has a committee to focus on the issue. City leaders started a growth reserve account to help pay for infrastructure improvements as a way to attract developers.

Danny Hill, of Hill Construction, said Decatur's Building Department is much easier to deal with than similar departments in other municipalities.

“Most people don’t realize they are a city department and they work for us,” Hill said. In Decatur, “they don’t have the mentality that we work for them like they do in some other cities.”

Decatur’s previous reputation among those in construction and development was acquired in the 1990s and early 2000s under longtime Director Jimmy Brothers, who led the Building Department for 22 of his 27 years with the city.

Brothers said this month he was of aware what some thought about his department.

“I just did my job,” said Brothers, who worked in the Planning Department before moving over to the Building Department.

While local builders said they’re aware of the Decatur department's previous reputation, they agreed it wasn’t totally deserved. Fite said it probably developed because Brothers liked to keep up with new construction trends and Decatur's department was known for being a stickler on requiring builders to meet the code.

Hill said he’s never had a problem with Decatur’s Building Department. During Brothers' tenure, he said, some other north Alabama cities were slow to keep up with revised standards and change their codes.

Changes in building codes can often mean additional expenses and work that some contractors would prefer not to make, Hill said.

“When everybody was complaining about Decatur, it was from people who they didn’t like that they were being held to the code,” Hill said. “The people fussing were the ones who most likely wanted to circumvent the code. I don’t always agree with what they tell me, but I do whatever they tell me I have to do.”

Fite said some contractors, particularly those who weren’t from Decatur or didn’t do regular work in the city, found it hard to adjust to the additional rules they had to deal with in Decatur as compared to other areas.

Brothers said it was “very common across the Tennessee Valley” for cities to be at least two cycles behind the adoption of any new building codes.

“If anything, Decatur should be proud with how safe our buildings are,” Fite said.

Longtime Councilman Billy Jackson said he doesn’t think the Building Department's old reputation was reality. He said he met with a contractor at one time to discuss the issues.

“We talked for a long time and, at the end, he couldn’t give me any facts,” Jackson said.

Former Mayor Don Kyle said he was aware of the city’s reputation when he was elected for his first term in 2002. He said he and Brothers had a number of private conversations about ways to improve the department’s perception.

“He and I had a lot of conversations about enforcing the rules without acting like a dictator,” Kyle said.

Brothers admitted that sometimes he may have come across a little harsh to some people in his efforts to enforce the code.

Kyle credited Wally Terry, who retired last year as director of development, for his work on improving perceptions of the Building Department.

Kyle said that he found in his second term as mayor (2012-2016) that Terry had done well in meeting with those in the contracting business and those involved in the city approval process like the Planning and Building departments and Decatur Utilities.

“You could tell they (contractors and developers from other cities) were consistently impressed with the city’s work,” Kyle said.

The Building Department is now run by two men, Tom Polk and Randy Lee, who answer to new Director of Development Dane Shaw.

Polk is the development services manager who works with contractors and developers at the start of projects when they’re presented to the city for approval.

Lee is senior building inspector. His crew inspects construction for residential, business and industrial (the most complex type) uses. The inspectors are each certified, licensed and experienced in their areas of expertise, whether it’s electrical, machinery, plumbing or something else. Their jobs are to make sure construction elements are properly installed to meet codes.

“They know the jargon and that helps them be more effective,” Polk said.

Polk, who was honored in August with the Code Officials Association of Alabama’s Lifetime Achievement Award for 2021, has been a key member of the Building Department since Brothers hired him 27 years ago, Kyle said.

“Jimmy relied heavily on Tom because he could answer most questions from carpentry to the sign ordinance,” Kyle said.

The Building Department is currently busy, but the contractors said the department does a good job of keeping up. From Sept. 7, 2020, through Sept. 8 of this year, Polk said, the city issued 3,736 building permits, including 2,557 residential and 572 commercial, permits at a total estimated value of $154.45 million in projects. Permits are issued for everything from single-family homes, businesses, apartments, churches and hospitals to smaller projects like garages.

Fite said delays are part of the construction business, and Decatur “is as good as anyone” with a quick response and trying to work with the builder to find the best and quickest solution to an issue.

Pate said the city does a good job during planning reviews of getting out ahead on a project instead of waiting until the point where a change might cost a contractor time and money.

Polk and Lee said they tried to improve communication with not only the contractors, but also with the subcontractors, developers and property owners.

“A lot of time the contractor uses the city as a scapegoat when there’s a delay,” Polk said. “If we communicate with everybody, that lets everyone know where the project really stands.”

Lee said additional communication keeps the contractor from making a mistake that might cost him money later “when it used to be doing something and then ask for forgiveness later.”

They said the department does its best to respond as quickly as possible to meet the builders’ inspection needs so projects can keep moving. This includes inspectors who are crossover trained in trades so they can back each other up.

Polk said they also try to do a lot more education on codes, especially when there are code changes. This will particularly be an issue going forward with the addition of more energy efficiency and flood codes.

While the International Building Codes change and the state approves new codes, it’s usually up to the cities to adopt the changes for the new codes to be effective.

Most agree that it would end the problems of dealing with different codes if every city and county in the state adopted a uniform building code, but Brothers said he doesn’t think that will ever happen.

“I spent years trying to get this very thing passed,” Brothers said.

The poor reputation was not undeserved. The department reps would inspect, insist something be done a certain way, and then when re-inspected, tell you to do it yet another way. They took a long time to come out to inspections, which delayed builders. Just two examples of why builders refused to build in Decatur because of having to dela with the city building department.