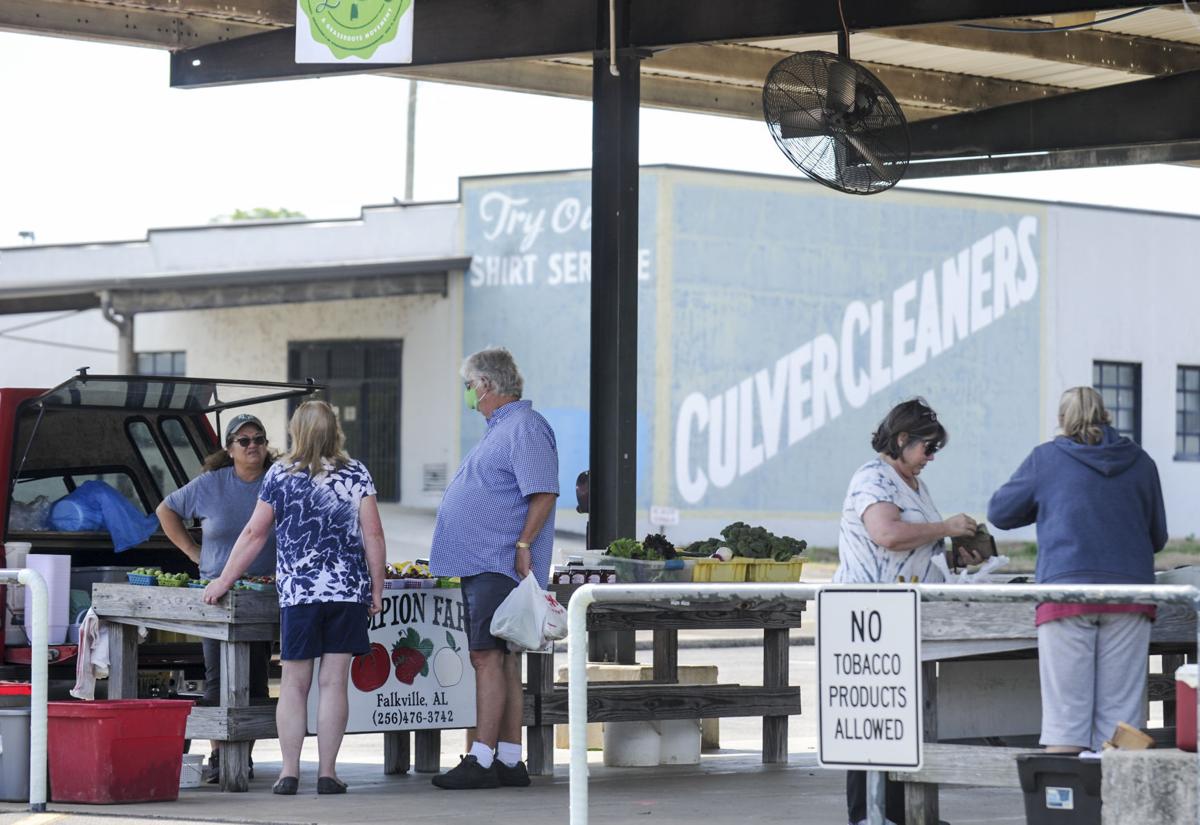 Shoppers buy produce at the Morgan County-Decatur Farmers Market earlier this month. The former Culver Cleaners building, which the Farmers Market board has considered buying as part of an expansion, is across the street. [JERONIMO NISA/DECATUR DAILY] 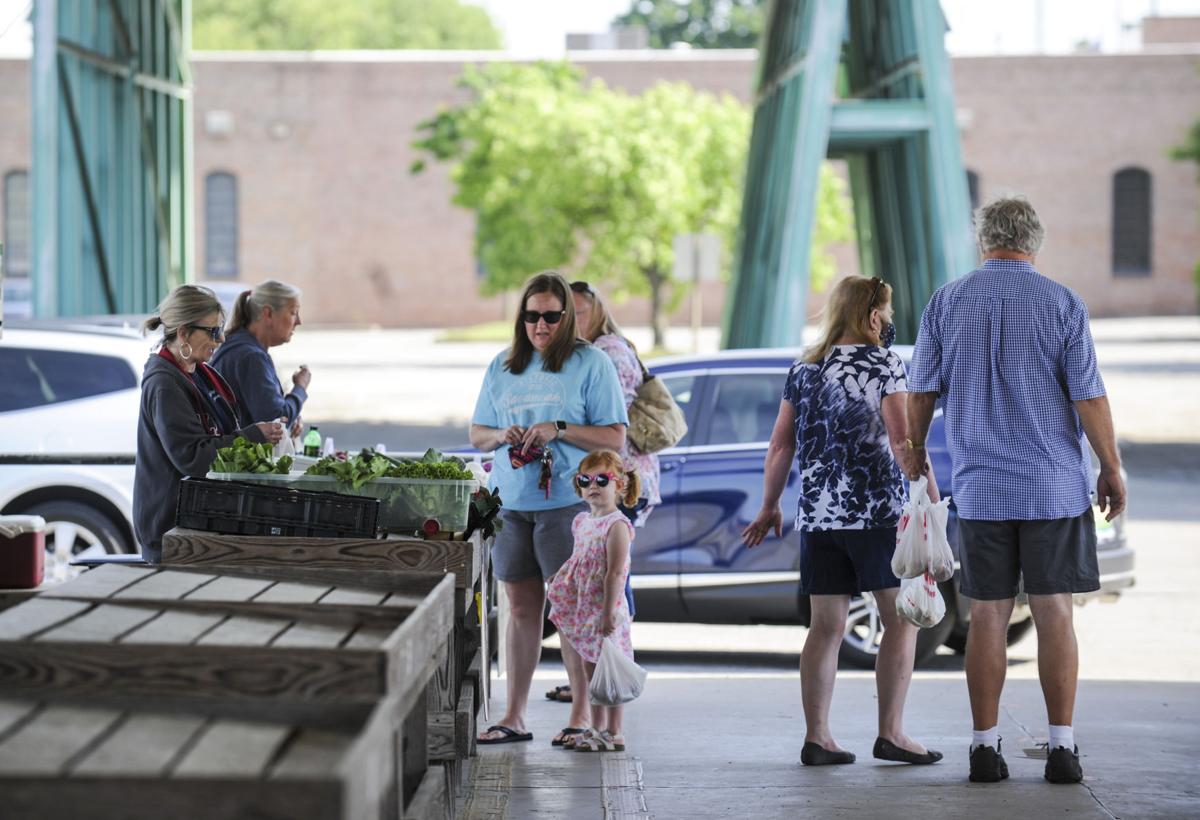 Few shoppers were present on May 19, a Wednesday, which has normally been a busy day at the Morgan County-Decatur Farmers Market. Low customer traffic has been a common problem so far this growing season according to vendors. [JERONIMO NISA/DECATUR DAILY]

Shoppers buy produce at the Morgan County-Decatur Farmers Market earlier this month. The former Culver Cleaners building, which the Farmers Market board has considered buying as part of an expansion, is across the street. [JERONIMO NISA/DECATUR DAILY]

Few shoppers were present on May 19, a Wednesday, which has normally been a busy day at the Morgan County-Decatur Farmers Market. Low customer traffic has been a common problem so far this growing season according to vendors. [JERONIMO NISA/DECATUR DAILY]

The 84-year-old Morgan County-Decatur Farmers Market could be in for a complete overhaul and expansion, but how that will look, the timing and the cost remain unknown while the farmers just want more customers.

Ideas for the market at 211 First Ave. S.E. include pavilion replacement, street and railroad crossing changes, expansion to neighboring properties and more interior space with a kitchen, offices and restrooms.

Farmers Market board chairwoman Laura Ritch said they’ve been talking about market improvements for the seven years she’s been on the board, “but we’re still at the preliminary stage. We are planning a study.” An architect has been chosen.

Interest in improving the Farmers Market, which farmers from as many as seven counties often use to sell their produce, is getting support on the state, city and county levels.

Ritch said they’re looking at creating a plan to solve current issues while planning for growth that she believes “would benefit all of the farmers in the area. We need to make this more of a destination and make people want to come to Decatur, Alabama."

However, regular vendors like Marilyn Champion, of Champion Farms in Falkville, and Chris Sharp, of Clark Produce in Priceville, agreed that expansion doesn’t matter if they don’t get more customers.

While Saturday is always the busiest day at the Farmers Market, Wednesday traditionally is a busy day, but on a recent Wednesday they packed up at 10:30 a.m. and went back to the farm. The market was empty after they left.

Champion said this is the worst sales have been in her 10 years of coming to the Decatur market. She noted the coronavirus pandemic may have kept some people away and the growing season is still early. Tomatoes are especially popular with customers, but they’re not ready yet. June, July and early August are usually the prime sales periods.

“What we really need is more advertising to get more customers here,” Champion said. “And many of our older customers aren’t on social media.”

Decatur and the Morgan County Commission jointly own the site after CSX railroad donated the land in 1984, but it’s run mainly with money raised from rental fees and private contributions.

A draw for young families

Council President Jacob Ladner and Councilman Kyle Pike said they want to do what they can to boost the market. The city provides maintenance support but doesn’t add any funds for operations.

“It’s one of those quality-of-life projects that we need to focus on,” Ladner said. “People, particularly young people with families, are looking for a nice farmers market where they can get fresh vegetables when they move to a new city.”

Mayor Tab Bowling said he would also support expanding and improving the Farmers Market. The market needs to have better parking, he said.

"It's important to the residents because they can get home-grown vegetables and a lot of other quality products," Bowling said.

The County Commission appropriated $5,000 this year after giving the market $1,000 in previous years.

“The Farmers Market needs repairs so I think it would be a great idea to make improvements,” Commission Chairman Ray Long said. “We look at the market as a very important part of our county.”

Some projects may be necessary, starting with the foundation of the 10,500-square-foot pavilion and office built in 1984. The board ruled out moving to a new location with more space, mainly due to the sentimental value of being one of the state’s oldest farmers markets.

“Whatever we do we’re not going to put lipstick on a pig,” Ritch said. “And the building can’t be expanded, either up or sideways, because the foundation isn’t in good shape.”

Ritch said they plan to look at the pavilion’s placement on the property, and there’s a possibility they could take advantage of the area beneath the Grant Street overpass since it’s now city property. The overpass was once a state road, and use of the area under the bridge wasn’t allowed by the state.

Rick Paler, executive director of the Decatur Downtown Redevelopment Authority, said there’s been talk about facilitating an expansion by buying the old Culver Cleaners building that’s for sale across the street.

Ritch said the Culver building could provide offices, a kitchen and restrooms but the Alabama Department of Environmental Management may require an environmental cleanup of the former dry cleaner.

“We don’t know what chemicals were used in the building so there could be some environmental concerns,” Ritch said.

City officials asked the Police Department whether it would be feasible to close Second Street east of the railroad track, close the CSX railroad crossing at Second Street, and close First Avenue from Grant Street south to keep vehicles from moving through this area, allowing for an expansion where the street is now and to improve safety.

Ritch said she hopes the city can solve the traffic problem, especially if they obtain the Culver's building.

Pike said Police Chief Nate Allen and Capt. Chris Jones told them in a meeting last week that the traffic count is too high in this area and they're concerned blocking the streets would have a negative impact on traffic flow. They're also concerned it would divert too much traffic to the Gordon Drive overpass, Pike said.

"There's also a feeling our residents would not be happy if we blocked Second Street," Bowling said.

Bowling said they could make First Avenue one way from Grant Street to Second Street and change parallel parking on First Avenue to perpendicular parking.

Pike said they also discussed seeing if CSX would make this area a “quiet zone,” as it did in the Vine Street Northwest area, but Bowling said this wouldn't work because the horn is needed for the busy Moulton Street crossing to the north.

"They have to start blowing their horn before they reach the Moulton Street crossing," Bowling said.

Why on earth would there be any emphasis on expanding the Farmer's Market when there is no consistent customer base? Would it not be wiser to see why the business is down and make adjustments and properly market and advertise the market to get the customer base back consistently before we go any further with expansion? This "build it and they will come" is a reckless management strategy.