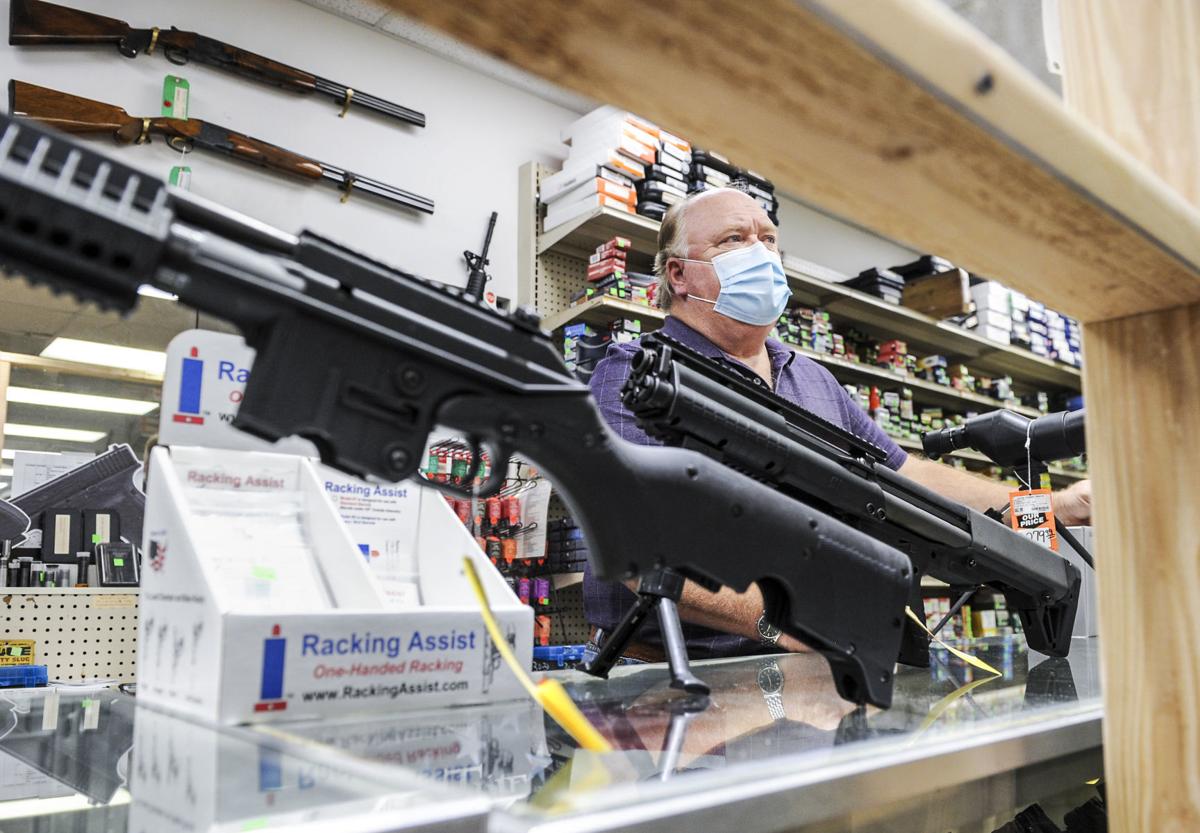 Mid-City Pawn store manager Howard Godbee talks with a customer Thursday. He attributes a dramatic increase in gun and ammunition sales to the pandemic and civil unrest. [JERONIMO NISA/DECATUR DAILY] 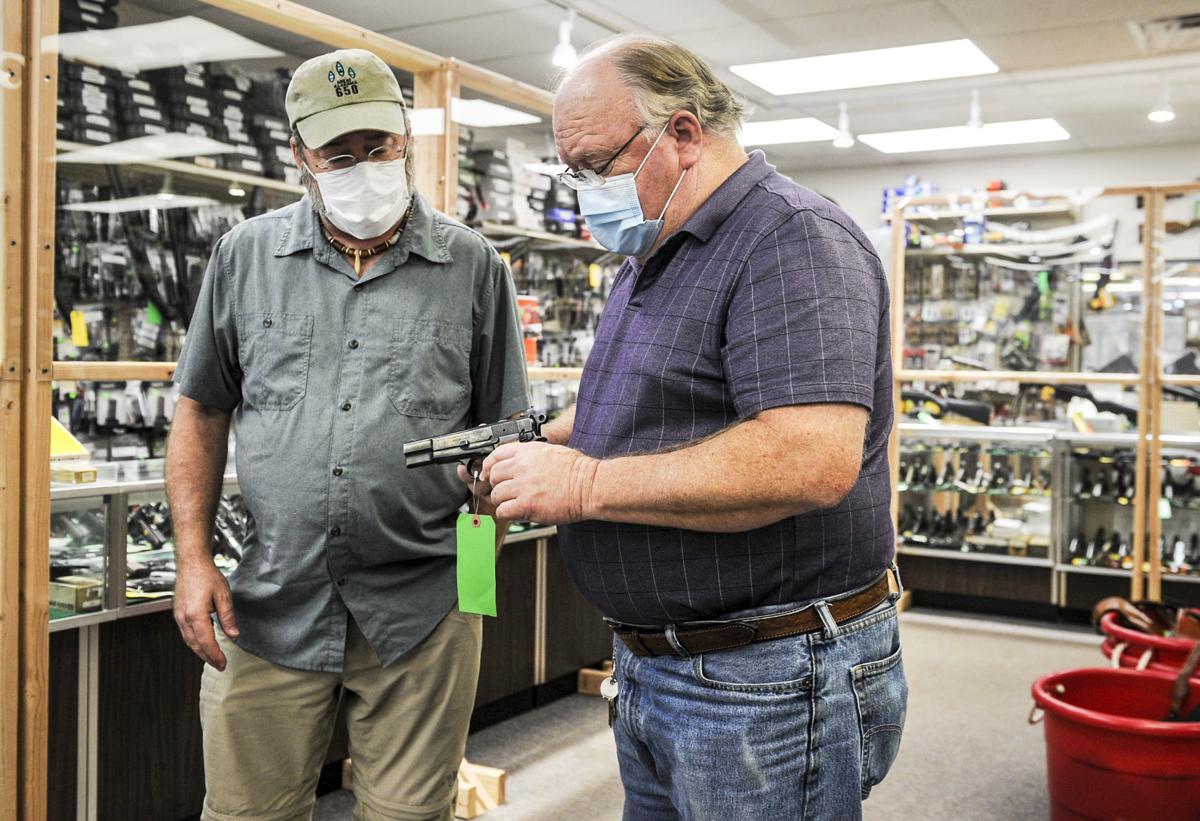 Mid-City Pawn store manager Howard Godbee talks with a customer Thursday. He attributes a dramatic increase in gun and ammunition sales to the pandemic and civil unrest. [JERONIMO NISA/DECATUR DAILY]

A dramatic increase in local gun and ammunition sales, according to dealers, has been prompted by the COVID-19 pandemic and civil unrest across the nation.

Melvlyn Crowden, owner of Bama Pawn and Gun on Beltline Road in Decatur, said her store’s year-over-year business is up 50% to 60%, with 9mm and high-capacity shotguns being the largest sellers.

“We’re having some months now run with numbers like our Christmas sales,” Crowden said. “It’s definitely uncharted territory for gun sellers. Our inventory is down because we can’t get new orders in. Most of the manufacturers were at half staff because of the coronavirus, and the demand has created a backlog.”

“In the past, our regular customers were blue-collar males aged 25 to 65,” she said. “Now we’re getting entire families come in, definitely more women. Just last week we had a mom, dad and daughter come in and each purchased a firearm. I’m also seeing more over-the-road truck drivers through our doors wanting to buy protection from the civil unrest they are seeing.”

Howard Godbee, manager at Mid-City Pawn and Gun on Sixth Avenue in Decatur, and Crowden both agree the increase in sales is for personal protection.

“These sales aren’t the hunting-type guns. People are concerned about the pandemic and then they see all of the unrest, rioting, looting, protesting that is going on across the nation and want to protect themselves and their families,” Godbee said. “Our firearms sales are up about 20% the past year or so, and our ammo sales are much higher than that.”

He said gun sales at his shop have jumped from about 150 to 200 sales a month.

“Now people are traveling to the beach and don’t want to find themselves in a town where protests are going on,” Crowden said. “Some are buying guns for their cars and for their homes.”

Godbee said he is seeing assault rifle sales jump. “Our ARs are selling daily now,” he said. “People are wanting the high-capacity guns that have 10, 15 shots or more.”

He said the government-issued stimulus checks also have boosted gun sales. “It’s nothing nowadays to have someone come in and purchase a $1,000 gun.”

“We’re having to pass along the higher costs to the consumers. It’s about a 10% price increase we’re seeing from the distributors,” she said.

Crowden said in her 28 years in the gun business she hasn’t seen many times that compare with the current spike in sales.

She said when former President Barack Obama pushed for a ban on assault rifles in 2015, the sales of those guns rose drastically.

“For April, May and June, we have had a 62% increase over the same period last year in concealed carry permits issued,” he said. “We traditionally see an increase anytime there is uncertainty in the air, for example presidential elections, natural disasters …. We believe the current increase has multiple contributors including the COVID-19 pandemic as well as the civil unrest that has been seen in other cities across the nation.”

“The funds generated are used to support our law enforcement activity through training, equipment and supplies,” he said. “However the increase has not created a windfall due to the ongoing costs of dealing with COVID-19 and its disruption to normal operations.”

Godbee and Crowden advised potential gun owners to do their homework before purchasing a weapon.

“Understand what you’re needing. You don’t need an AR15 if you live in an apartment complex, but you might want a shotgun with some birdshot,” Godbee said.

He added .22-caliber handgun sales are being replaced by .380 and 9mm sales.

“It’s important to buy something you’re comfortable with,” Crowden said. “If you don’t feel comfortable with the gun, you won’t use it or use it as a last resort. How it feels in your hand is very important.”

She said she is seeing more women purchase a .380 vs. a 9mm handgun because the recoil is lighter.

A rising problem with increased gun sales is the background checks are taking longer, Godbee said. He said what usually is a 10-minute background check sometimes is taking up to five days now.

David Wiley, owner of Wiley Trading Co. in Decatur, said his store sold out of ammunition in March, and he hasn’t reordered any because his business is good in other areas.

“Ammo sales were always hot or cold,” he said. “If we had it right now, it would be very, very hot. When COVID-19 came around, (the ammo) we had sold immediately.”

Nationally, background checks for firearm sales reached a record high in March and stayed at that level through April and May, according to the National Shooting Sports Foundation. A survey of gun sellers in May showed that 40% of the sales came from first-time gun buyers.

The group also said semiautomatic handguns outsold shotguns by a 2-to-1 margin for first-time buyers.

It's not just a virus or riots driving sales.