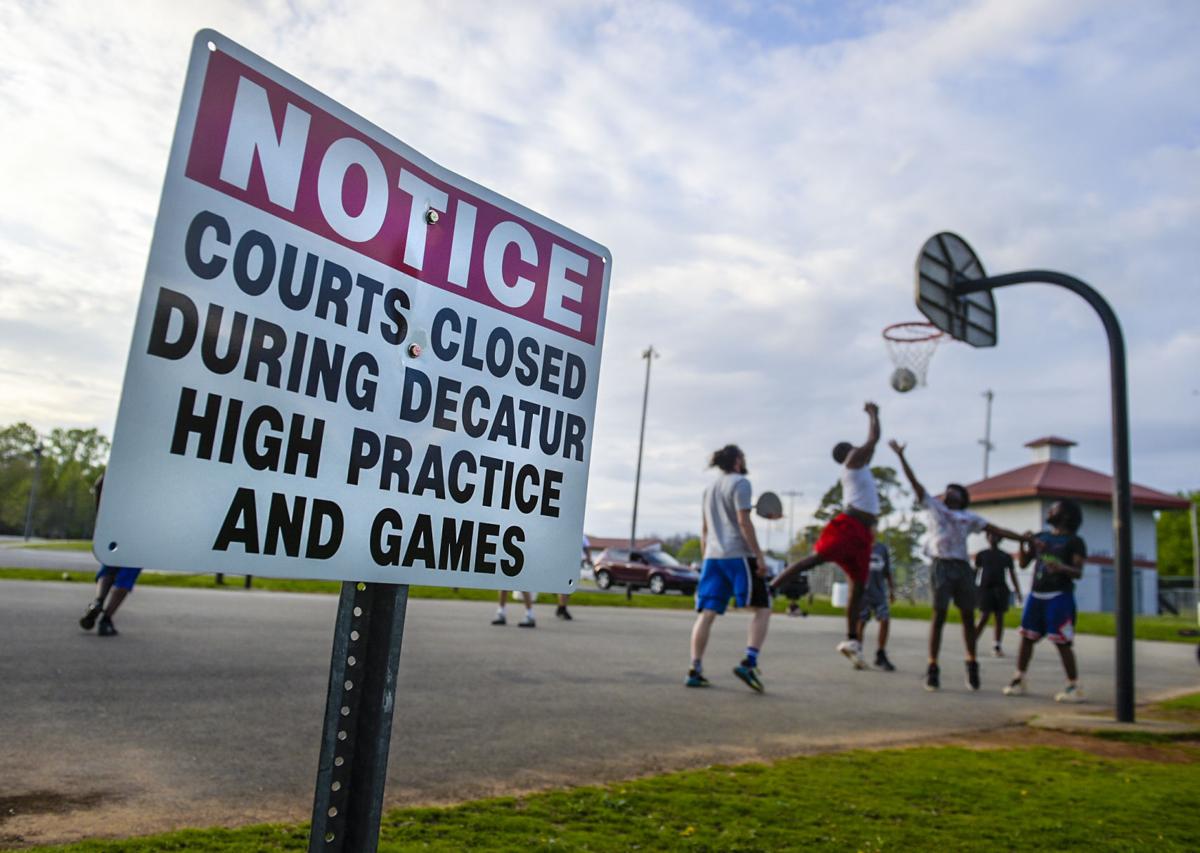 A pickup basketball game is played at Delano Park's court on Tuesday evening, but it wouldn't have been allowed if the Decatur High softball team had been playing or practicing. [JERONIMO NISA/DECATUR DAILY] 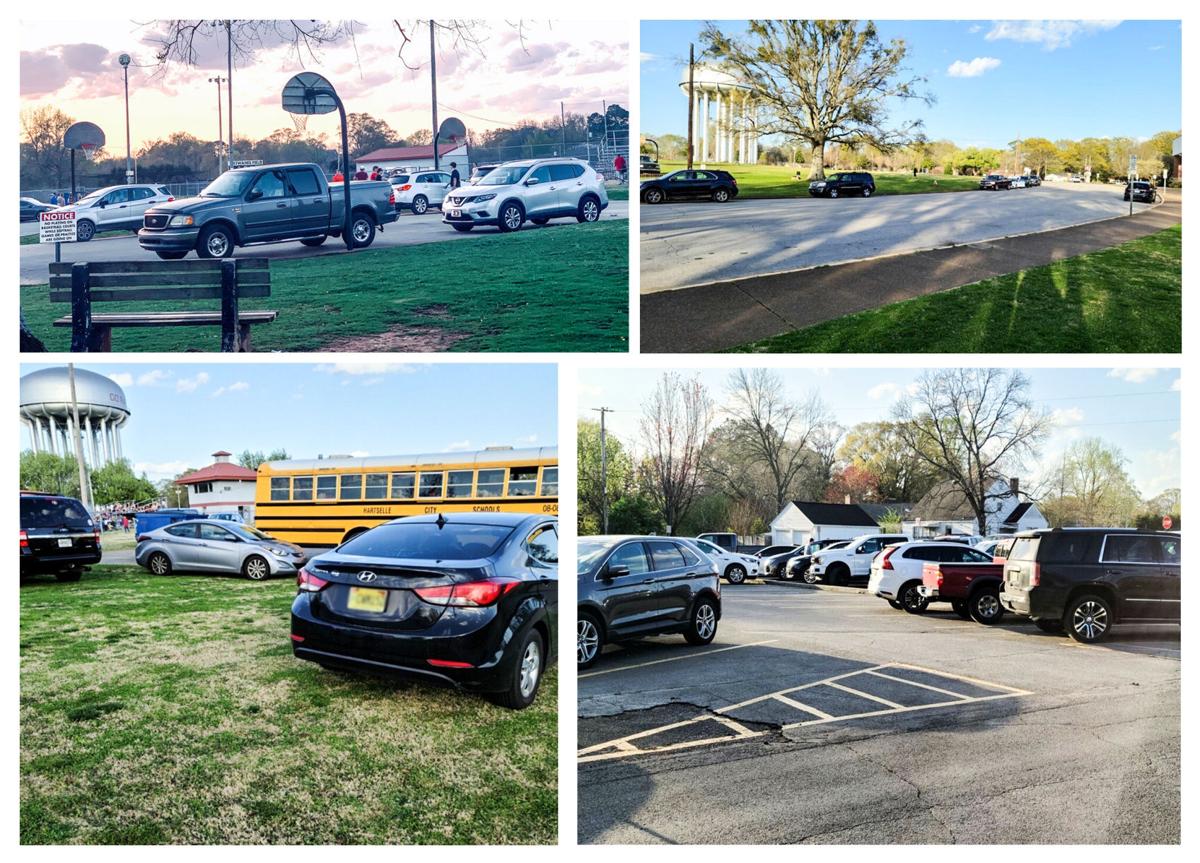 This series of courtesy pictures was taken during the March 24 softball game between Decatur High and Hartselle at Delano Park. The images on the left show cars parked on the Delano basketball court (top left) and on the grass (bottom left), while there are vacant spots both on Prospect Drive Southeast (top right) and at Decatur Middle School (bottom right). [COURTESY PHOTOS]

A pickup basketball game is played at Delano Park's court on Tuesday evening, but it wouldn't have been allowed if the Decatur High softball team had been playing or practicing. [JERONIMO NISA/DECATUR DAILY]

This series of courtesy pictures was taken during the March 24 softball game between Decatur High and Hartselle at Delano Park. The images on the left show cars parked on the Delano basketball court (top left) and on the grass (bottom left), while there are vacant spots both on Prospect Drive Southeast (top right) and at Decatur Middle School (bottom right). [COURTESY PHOTOS]

City officials have banned pickup basketball at Delano Park whenever the Decatur High softball team takes the field for games or practice, leaving fewer options for roundball players shut out of gyms by COVID-19.

And instead of serving as a platform for dribbles, Delano's asphalt basketball court and surrounding grounds became parking spots during a softball game last week. A Delano Park Conservancy member said the parking of vehicles violated Parks and Recreation rules for the park.

“They were having instances where folks were hearing a lot of foul language from the people playing basketball and they didn’t want that, especially around the girls,” Lake said.

The city has provided and maintained softball and baseball fields for the schools for years.

“We just want to work with the schools,” Lake said.

Kaden Martin, 15, lives in the neighborhood near Delano Park and the school. He often plays basketball with his friends on this outdoor court. Occasionally, adults join them in the games, he said.

Martin said the signs that closed the basketball courts during the softball team's games and practices suddenly appeared one day. He said he was told it was because of “teenagers cussing."

On the Parks and Recreation website, the top amenity listed for Delano Park is "one 60x100 asphalt play area with 4 basketball goals."

Jackson said many of the youth come from low-income homes and pickup basketball is their outlet, especially during the coronavirus pandemic when the number of courts available for pickup games has dwindled.

The only Southeast Decatur outdoor basketball courts are at Delano Park and Oak Park Elementary. There are three outdoor courts in Northwest Decatur, but one will soon be closed when renovations begin at Carrie Matthews Recreation Center, which has an outdoor goal in its parking lot.

The city’s four recreation centers are closed because of the pandemic. Lake said he’s hoping to be able to reopen the recreation centers when Gov. Kay Ivey lifts her COVID-19 emergency order on April 9. With the lifting of the order, Ivey also plans to end the mandatory mask requirement.

School board member Peggy Baggett represents the Delano Park neighborhood as part of her District 2. She said she’s sure Satterfield had good reasons for asking Lake to stop the basketball games during softball games and practices.

Baggett said Delano Park is supposed to be a family park so vulgar language isn’t needed there.

“I’m sure there’s a sense of protection going on,” Baggett said. “We don’t need that kind of language around the girls. We want an environment that’s conducive for young women.”

Baggett said they could have asked the basketball players to watch their language but such a request might have just escalated the conflict.

She pointed out that softball season is a short, limited period of time so there’s still plenty of opportunity to play basketball at the Delano courts. She also said the pandemic makes the times unusual.

“This is only temporary, and I’m sure they can live with it a few months,” Baggett said. “This is only one layer of this issue, and it shows that probably it’s time to open the other facilities.”

During the softball game March 24 between Decatur High and Hartselle at the Delano field, numerous vehicles parked on the grass and basketball court.

Barbara Kelly of the Delano Park Conservancy said her organization doesn't establish rules for the park, but Parks and Recreation has.

"You're supposed to use the designated parking areas" at Delano, Kelly said. "You're not supposed to park on the grass or the basketball court. ... There are very many reasons why. A green space is very fragile."

She said she thinks the parking on the grounds occurred because people don't know the rules. "I don't think anybody was trying to be destructive," she said.

Jackson said parking on the basketball courts and the Delano Park grass isn’t necessary because there’s parking on the street and, since the school day is usually over, in the Decatur Middle parking lot.

“It’s not like they don’t have enough parking,” Jackson said. “And they can even use the football stadium lot. They just might have to walk a little bit.”

Other courts are opening up next

So a sign couldn't be made first to please not to use foul language during softball games? That could not be tried first? This city is full of rhetoric about helping the homeless yet very little is done beyond talk, and for recreation to keep kids off of the street and away from crime. Yet here we are at a city park placing restrictions on those very kids that the city always says that they want to keep out of trouble. If a sign had been placed warning of possible restrictions of the ball courts if the foul language wasn't terminated I could understand this current action. But here we are going to extremes before trying to properly address the issue. But, as i have said before this is typical City of Decatur. Two signs need to be made, one addressing the foul language problem during softball games this to give those playing basketball a chance to adhere to the request to stop the foul language, and the other for no parking on the basketball courts. The action taken was the extreme, as to working and properly addressing the problem first. There is no reason the two cannot co-exist, but no one tried to make that happen.

I can see it now. A sign is put up. When the bad behavior continues who enforces it? The police? When they arrive there will be someone there to video the "racist police" clearing the court .