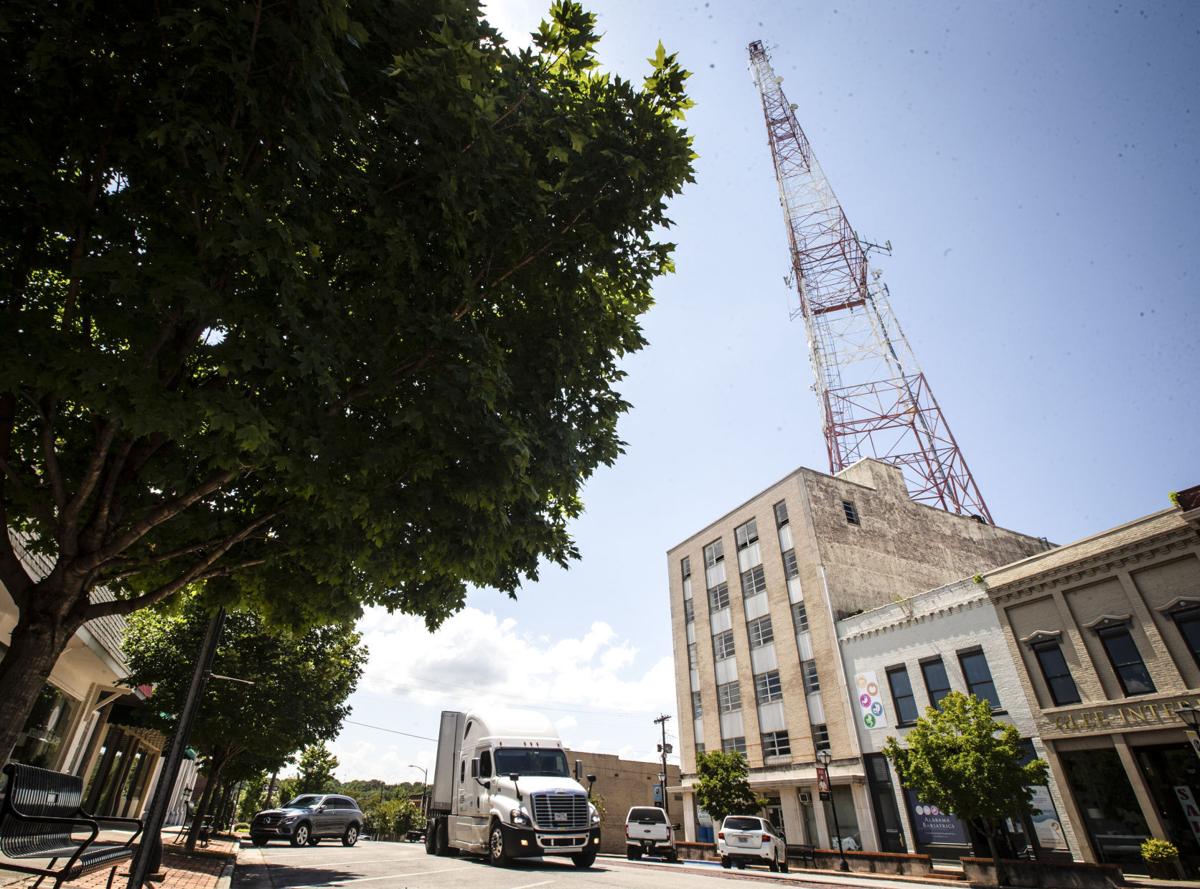 Radio signals are still transmitted from the tower on the building at 701 Bank Street. [DAN BUSEY/DECATUR DAILY] 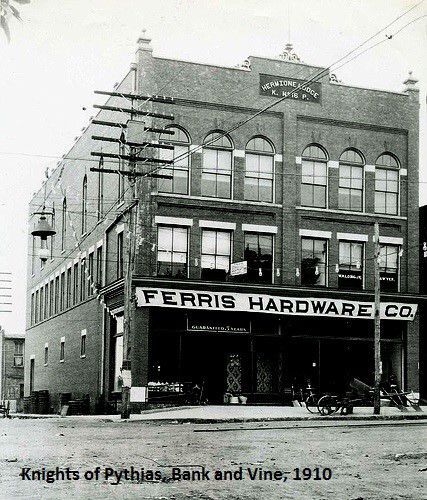 The building at the corner of Bank and Vine streets was originally built for the Knights of Pythias, Hermione Lodge, circa 1915, according to Caroline Swope, the historic preservation specialist with the city of Decatur. [PHOTO COURTESY OF FRAMEWORKS ARCHITECTURE] 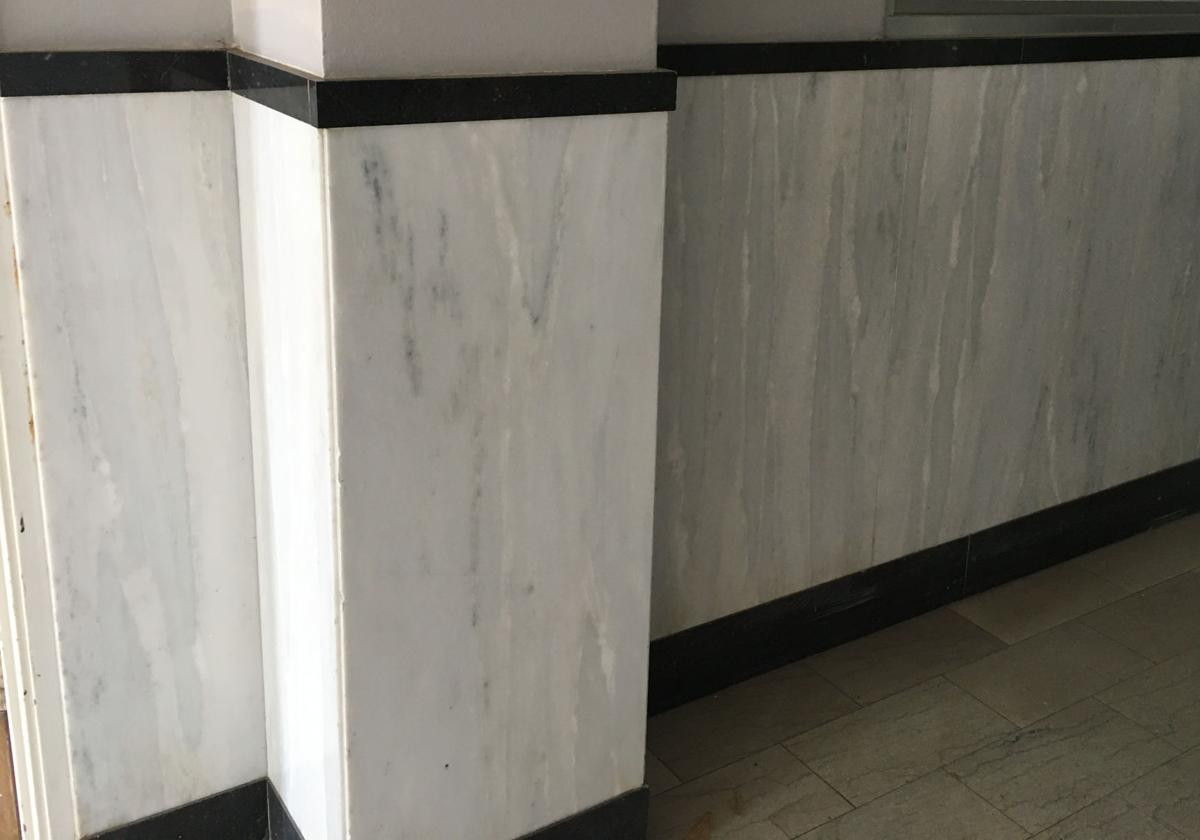 Marble on first floor walls inside the building at 701 Bank St. will be among historic aspects preserved, according to architect John Godwin. [BRUCE MCLELLAN/DECATUR DAILY] 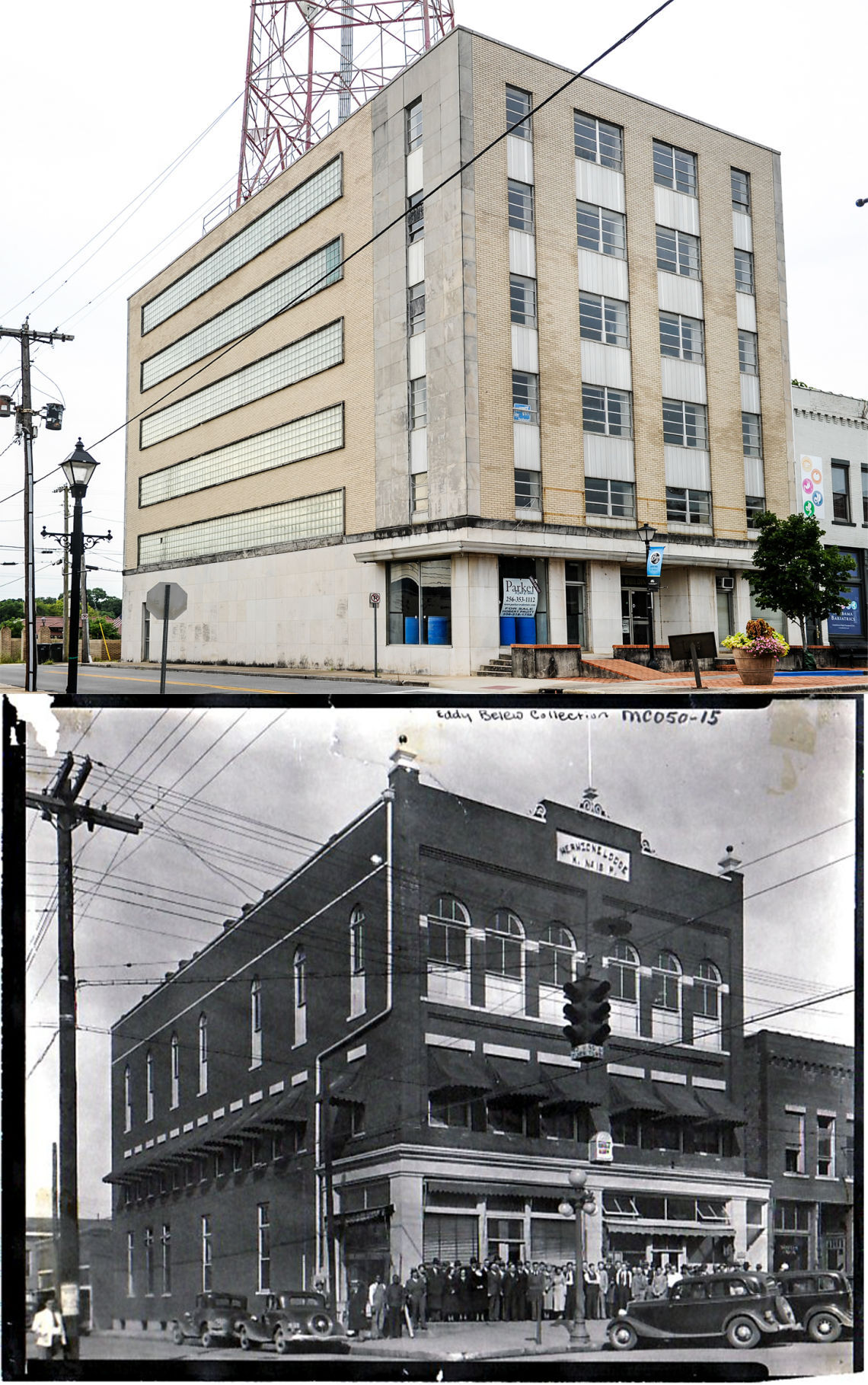 The century-old building at 701 Bank St. is shown as it looks now (top) and as it looked before three stories were added in the 1950s. A developer plans to renovate the building and put 20 upscale apartments and a restaurant in it. [PHOTOS BY JERONIMO NISA/DECATUR DAILY (TOP) AND COURTESY OF MORGAN COUNTY ARCHIVES] 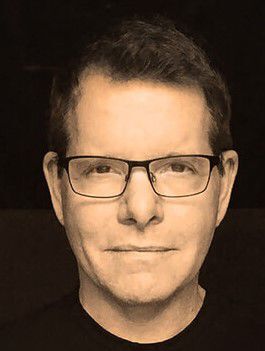 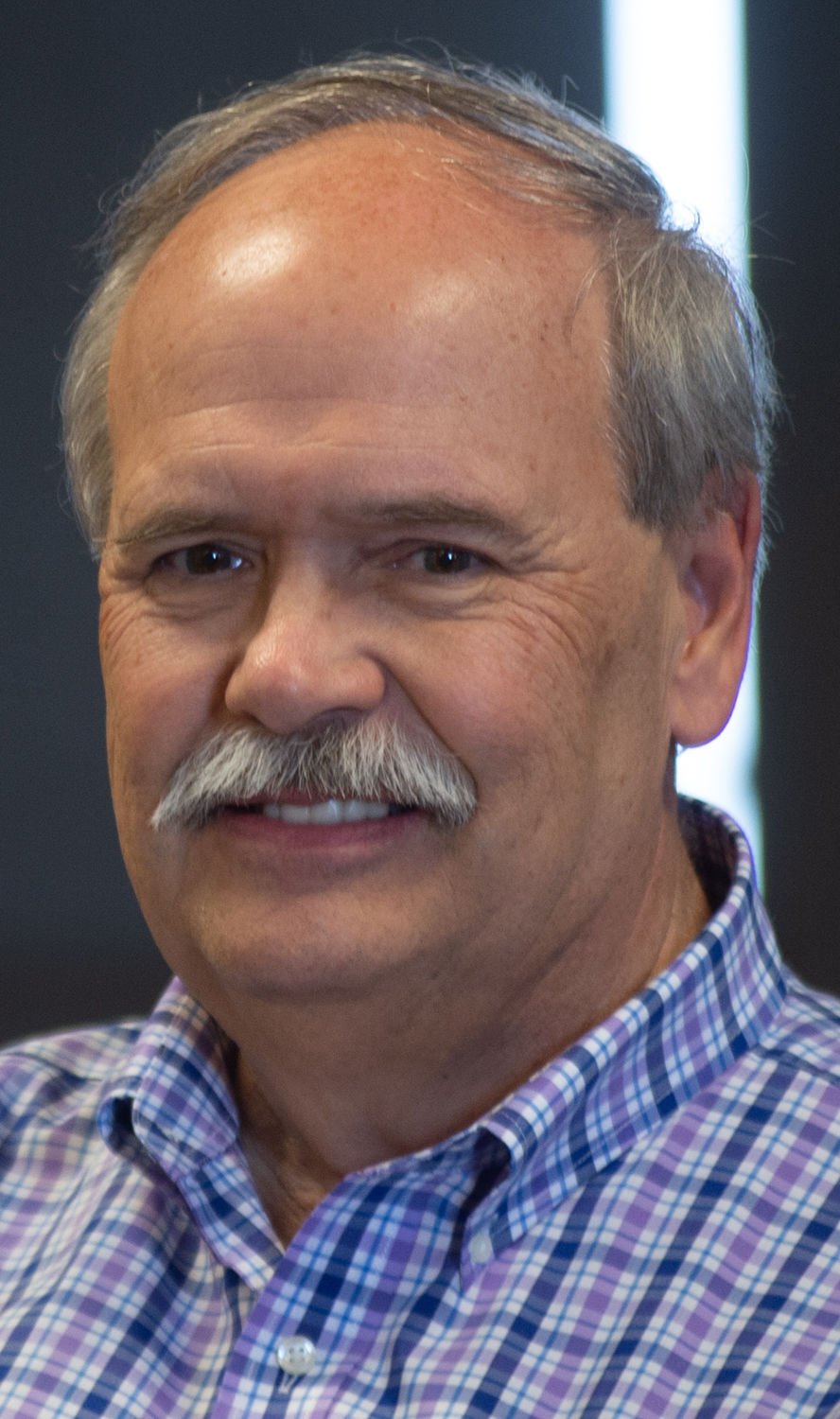 Radio signals are still transmitted from the tower on the building at 701 Bank Street. [DAN BUSEY/DECATUR DAILY]

The building at the corner of Bank and Vine streets was originally built for the Knights of Pythias, Hermione Lodge, circa 1915, according to Caroline Swope, the historic preservation specialist with the city of Decatur. [PHOTO COURTESY OF FRAMEWORKS ARCHITECTURE]

Marble on first floor walls inside the building at 701 Bank St. will be among historic aspects preserved, according to architect John Godwin. [BRUCE MCLELLAN/DECATUR DAILY]

The century-old building at 701 Bank St. is shown as it looks now (top) and as it looked before three stories were added in the 1950s. A developer plans to renovate the building and put 20 upscale apartments and a restaurant in it. [PHOTOS BY JERONIMO NISA/DECATUR DAILY (TOP) AND COURTESY OF MORGAN COUNTY ARCHIVES]

When Nashville real estate developer and entrepreneur Darren Metz first checked out the century-old, six-story building on Bank Street about a year ago, he could see its potential as an upscale mixed-use development.

“I was excited when I saw it,” said Metz, who owns the real estate development and private equity investment firm Luxeterra LLC. And, with all the amenities nearby, like streetscape features and Founders Park, “I was kind of surprised no one had taken advantage of it yet.”

Metz now owns the building through Luxeterra, closing on the purchase last month.

Plans for the now-vacant building at Bank and Vine streets include 20 upscale apartments on the second through sixth floors, with a mix of sizes: from a 600-square-foot efficiency to a 1,200-square-foot two-bedroom, “priced according to the market,” he said. “There won’t be anything else like it, for sure.”

“The basement will be for storage and a workout area, and the first floor will be earmarked for a restaurant and retail,” he said.

Metz’s goal for the mixed-use development is to further revitalize the downtown area and contribute to a pedestrian-friendly, “walkable” feel there.

“We hope this will encourage other developers to unlock the value and beauty of these old buildings,” Metz said. “There are a lot more opportunities than completed projects there.”

Rick Paler, the executive director of Decatur Downtown Redevelopment Authority, on Friday said he sees the project both as a fulfillment of years of investment in downtown and a spark to ignite more residential and retail development.

"It's probably the most prominent building down there. It could spur others to take a second look at downtown, either to renovate historic buildings or to build new ones in vacant lots," he said. "We used to have to beg developers even to look at us, but now they're beginning to come to us. That's because of all that investment in infrastructure, the streetscape and everything else that's been done over the last 10 years."

Paler's goal is for downtown to have enough residents that market forces will lead to the development of smaller specialty food shops, specialty groceries, hardware and drug stores, and a mercantile store.

"Our biggest push has been downtown residential," Paler said. "If you maximize the residential in the city center, that will drive the market for retail. The nearest drug store to downtown is at the Walmart on Sixth Avenue. There are no hardware stores. This will drive that market. We need to get to the point of having critical mass, and with this project we're starting to get there."

He said there are now about 30 residential units scattered through downtown, the most prominent being the 10-unit 307 Second Ave. development completed in 2017.

Metz said the cost of his Bank Street project includes $440,000 for the two parcels, including the adjacent parking lot, and a construction budget of $5 million.

“We’ll definitely keep all the exterior features, just freshen them up, and add some window openings in the back,” Metz said. “It will look like a new version of what it is now.”

He said the inspiration for the interior will come from the TV drama series “Mad Men,” set in the 1960s.

Metz was referred to the building by Steve Armistead, a Nashville realtor and developer who grew up in Decatur and graduated from Decatur High in 1974. Armistead, a co-founder of Armistead Barkley Inc. and senior vice president of Crosland Tennessee, was one of the original forces behind The Gulch development in downtown Nashville. Armistead was with Metz on his first tour of the Decatur property.

“We’re consulting and cooperating on future plans for other properties on Bank Street to try to revitalize that whole area,” Metz said. “He and I both see a lot of potential there.”

The project’s architect is John Godwin, a partner in Frameworks Architecture, located on Bank Street. He said the iconic tower that extends from the building's roof will remain after the renovation and that it still is used for transmission of radio signals.

Godwin said he wants to have the design portion of the project completed by the end of the year. Metz then hopes to start construction in January and complete the project in December 2021.

Metz expects to receive about $2 million in state and federal tax credits for the project.

An application has already been approved for an Alabama Historic Rehabilitation Tax Credit, a 25% refundable tax credit available for private homeowners and owners of commercial properties who substantially rehabilitate historic properties listed in or eligible for the National Register of Historic Places and are at least 60 years old. Eligible costs for the tax credit include repair of exterior materials, structural systems and interior finishes like floors, walls and ceilings; upgrades to HVAC, electrical and plumbing; and architectural, engineering and land surveying fees.

The tax credits “make the numbers work on rehabilitating an old building like this,” Metz said.

Metz acknowledged that the project is a complicated one.

“You’re dealing with an older structure,” he said. “There were some structural issues we had to assess. These older building have more complications — no deal killers, but there was a lot to analyze.”

Paler said the visibility of the building made it an important target for renovation, but he had concerns about whether anyone would ever tackle it.

"That's a hard building to do if you're not somebody who is a professional developer. I think that building is nuclear-hardened; it could take a direct missile hit and it wouldn't faze it. It's a hard one to renovate," he said.

Caroline Swope, the historic preservation specialist with the city of Decatur, compiled the building’s history while working on the tax credit application.

The building was originally built for the Knights of Pythias, Hermione Lodge, circa 1915, according to Swope.

“The main floor housed a bank and a grocery, while the third floor served as a meeting space for the Knights of Pythias,” she said. “It is unclear if the bank was the predecessor of Mutual Savings Bank,” which was founded in 1927 in the building.

Swope’s research showed that Mutual Savings Bank was the investment arm of Mutual Savings Life Insurance Co., and the company operated branch offices in Alabama through 1945, then grew into a national corporation and expanded to five other states.

“To accommodate the company's rapid growth, the building underwent a massive renovation in 1954,” she said. “An additional three stories were added to the structure, which was then completely refaced in the current International Style.”

She said local advertising at the time focused on “the ‘New York Office Building Style’ that graced the new headquarters.” The company used the building until 1975, when it moved to U.S. 31, according to Swope.

“One of the most striking features of the building is the large radio/TV tower that visually dominates the building's roof top, and indeed, Bank Street,” she said. She said Mutual Savings Life Insurance Co. founded WMSL radio station in 1935, and the company expanded its broadcast reach in 1954 with a TV station, which first broadcast on air July 4, 1954.

Swope said the TV station remained in the building until 1969, when it moved to Huntsville and eventually became WAFF-TV.

Paler said Swope, who was hired last year to fill the newly created position, has proved to be an invaluable asset in redevelopment efforts because of her role in obtaining the historic tax credits.

"There's no one like her in the state. The state knows that when she comes, they should listen to her," he said.

He said he recently was approached by a Mississippi developer interested in developing multi-family properties downtown, and he was able to point both to Swope and to the Metz development as reasons they should choose Decatur.

When the state initially implemented the historic tax credits, which include an annual statewide cap, Paler said projects in larger cities invariably exhausted the funding each year. Legislation by Sen. Arthur Orr, R-Decatur, designated a percentage of the available credits for smaller cities.

"That opened the door for us," Paler said. "Those tax credits can truly make or break a lot of these projects."