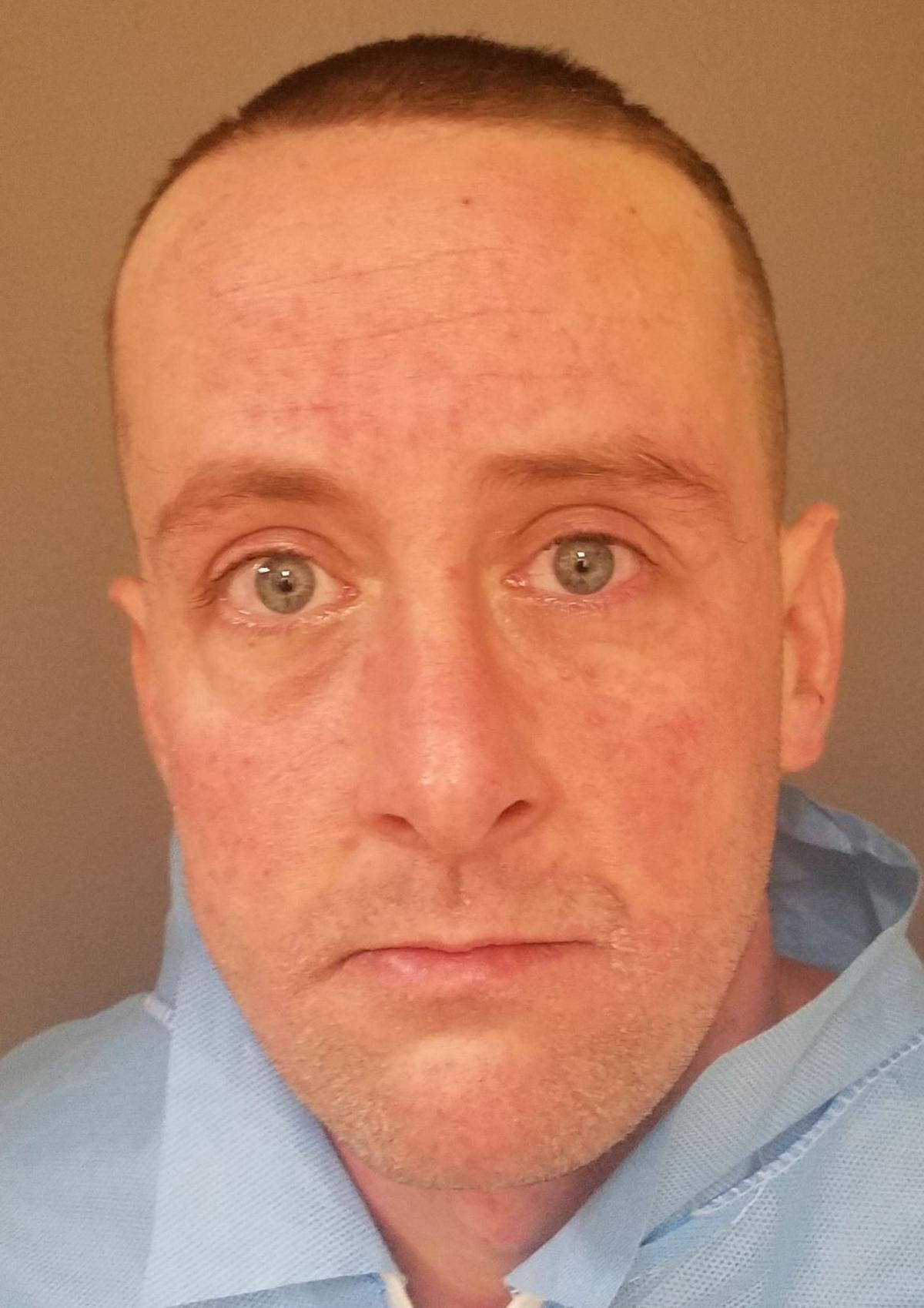 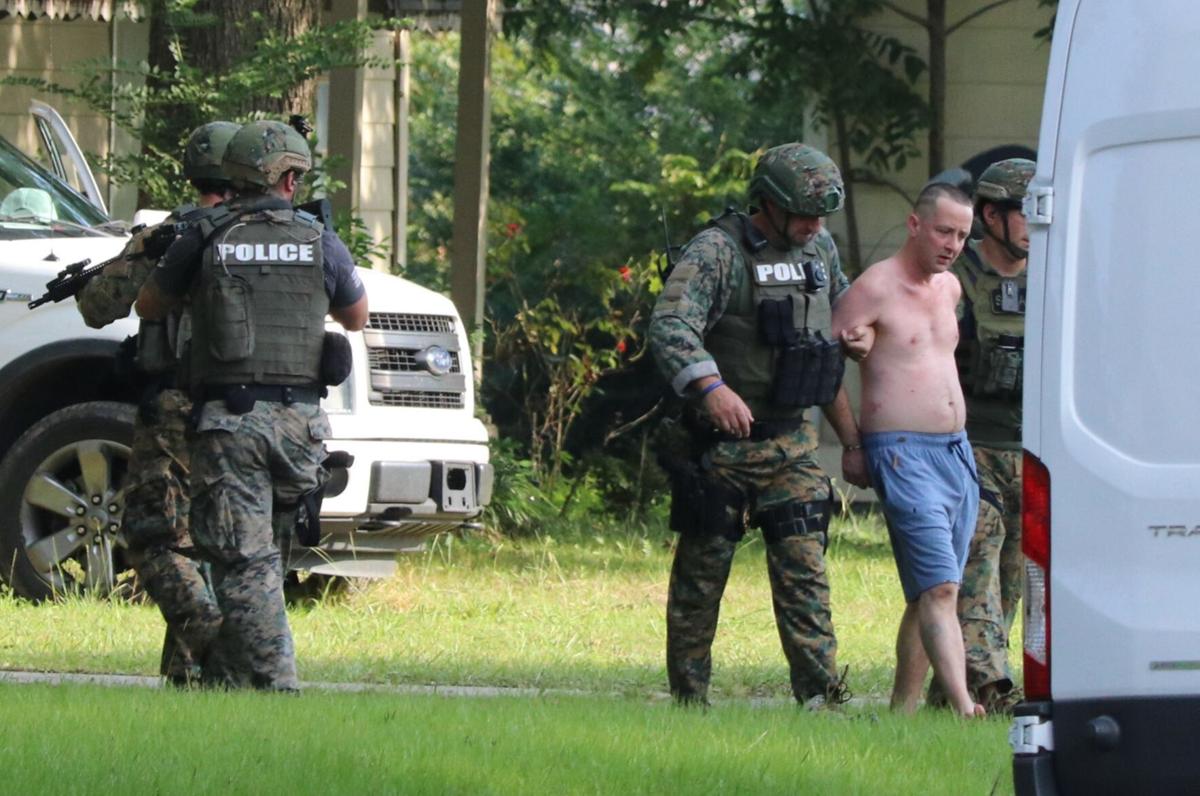 Anthony Messina is taken into custody Sept. 7 by a Decatur police SWAT team after an hours-long standoff. [ERIC FLEISCHAUER/DECATUR DAILY]

Anthony Messina is taken into custody Sept. 7 by a Decatur police SWAT team after an hours-long standoff. [ERIC FLEISCHAUER/DECATUR DAILY]

A man involved in an hours-long standoff last week on Danville Road, now out on bond, shot at his neighbor over a dispute about a dog and the neighbor shot back, according to police affidavits.

According to a search warrant affidavit by Decatur police Detective Joshua Daniell, a woman not involved in the shooting who lived across Danville Road from Messina said Messina came to her home “highly intoxicated and armed with a handgun” on Sept. 6, the night before the shootings. The woman said Messina had made previous threats to shoot a male resident of the house next door to her, also across Danville from Messina.

The target of those threats was walking his dog at 6 a.m. Sept. 7, according to the threatened man's wife, and had an argument with Messina. Messina then began shooting across Danville Road, toward their house. The incident, according to the affidavit, “stemmed from an argument over dogs.”

“The residents advised they returned fire — toward Messina — prior to running into their residence,” according to an affidavit by Detective Jasmin Ferizovic. The residents were not charged for returning fire.

Messina then shot into his next-door neighbor’s home and vehicle, according to Daniell’s affidavit, before running into his house. Dozens of police vehicles, including a Decatur police SWAT team, arrived soon thereafter and blocked off a block of Danville Road near Austin Junior High.

A negotiator attempted to convince Messina to leave his house. When that failed, police fired a flash-bang grenade and multiple gas canisters into the residence as they spoke through a bullhorn trying to get Messina to come out. Messina — shirtless, barefoot and uninjured — left his house and surrendered at 8:48 a.m.

One of the neighbors awoke to the sound of gunfire and said she heard 10-12 shots, according to police.

It was not the first time Messina had fired his gun in anger, according to an affidavit filed in May by his wife.

In a petition for a protection-from-abuse order, she said he pointed the gun “at my head and pulled the gun barrel back and said 'Pray before you go!' He then discharged the weapon right next to my ear and shot the roof of my living room. The bullet hole is still there today.”

The incident precipitating her petition came when Messina attempted to strangle her by putting “his arms around my neck in a locked position,” preventing her from breathing, she wrote. As she banged on a counter to alert others, her young son tried to get Messina to release her and “begged for his mother’s life.” She screamed when he loosened his grip and called 911 when he released her.

“He fled when the police arrived; they waited on backup before trying to go in but he was already gone,” she wrote.

She said he has also set their living room on fire, beaten her with an extension cord when she was pregnant, and sexually abused her.

In another incident, according to her affidavit, “He tied a power cord around my neck, threw the cord over his shoulder, my feet were off the floor and I dangled by my neck. He said I was his backpack. He had to give me CPR because I stopped breathing.”

Morgan County Circuit Judge Stephen Brown granted a temporary order preventing Messina from having any contact with his wife or her children and requiring him to surrender all firearms to the Morgan County sheriff.

Three days later, his wife asked to dismiss the petition because she no longer felt she was in danger and because “I do not want my children to go to court or be involved with DHR.”

Messina pleaded guilty to third-degree arson in 2017 after starting a fire at Big Bob Gibson Bar-B-Q on Sixth Avenue.

According to court records, Messina was seen on video surveillance shortly after midnight on March 5, 2017, piling up cardboard boxes on plastic trash cans outside the restaurant and setting them on fire.

“The male continued to add other pieces of cardboard and wood to the growing fire for several minutes before leaving the scene,” said Decatur police Detective Timothy Jackson in a court affidavit at the time.

Messina was sentenced to a year in jail, but the sentence was suspended and he was placed on supervised probation. He was released early from his probation after complying with all conditions, including paying $2,000 in restitution.

According to the petition his wife filed in May, she was employed at Big Bob Gibson when he set the fire.