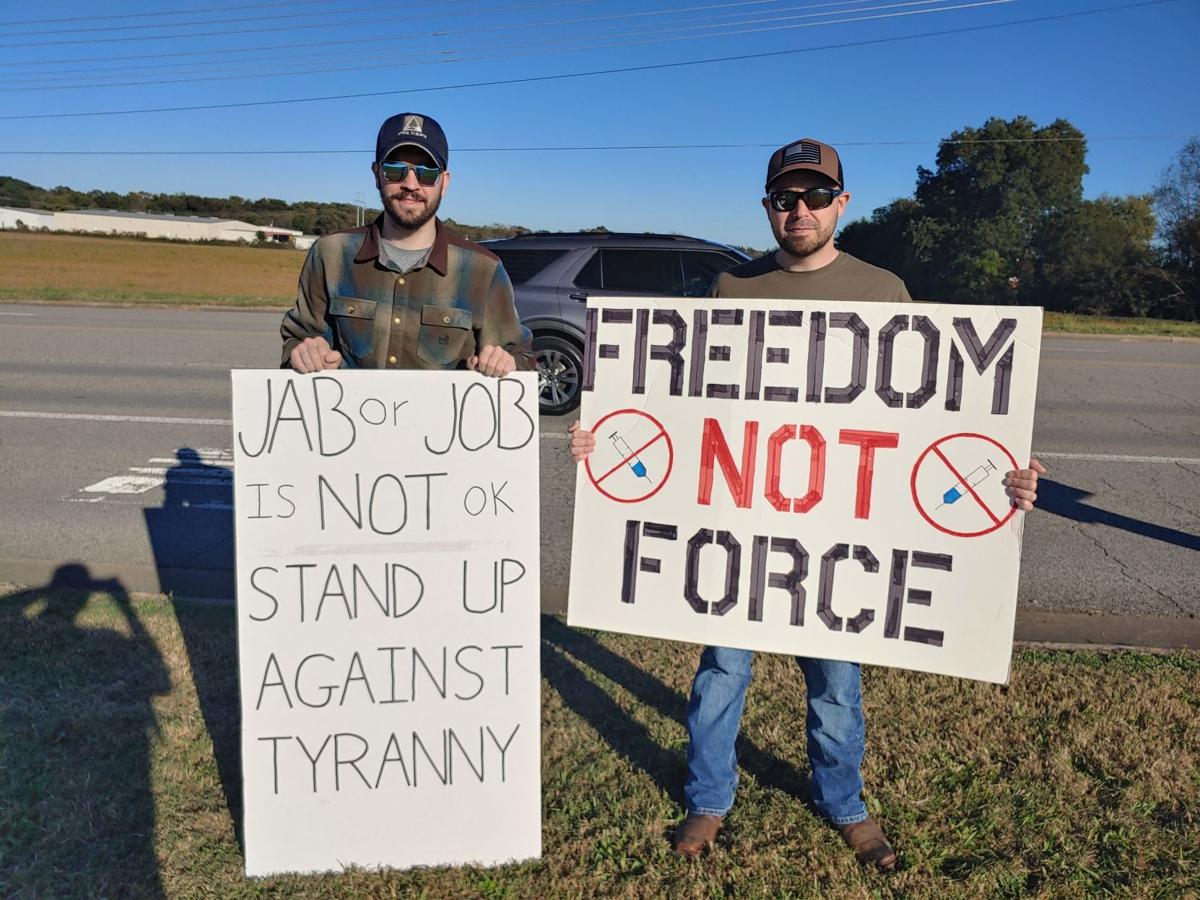 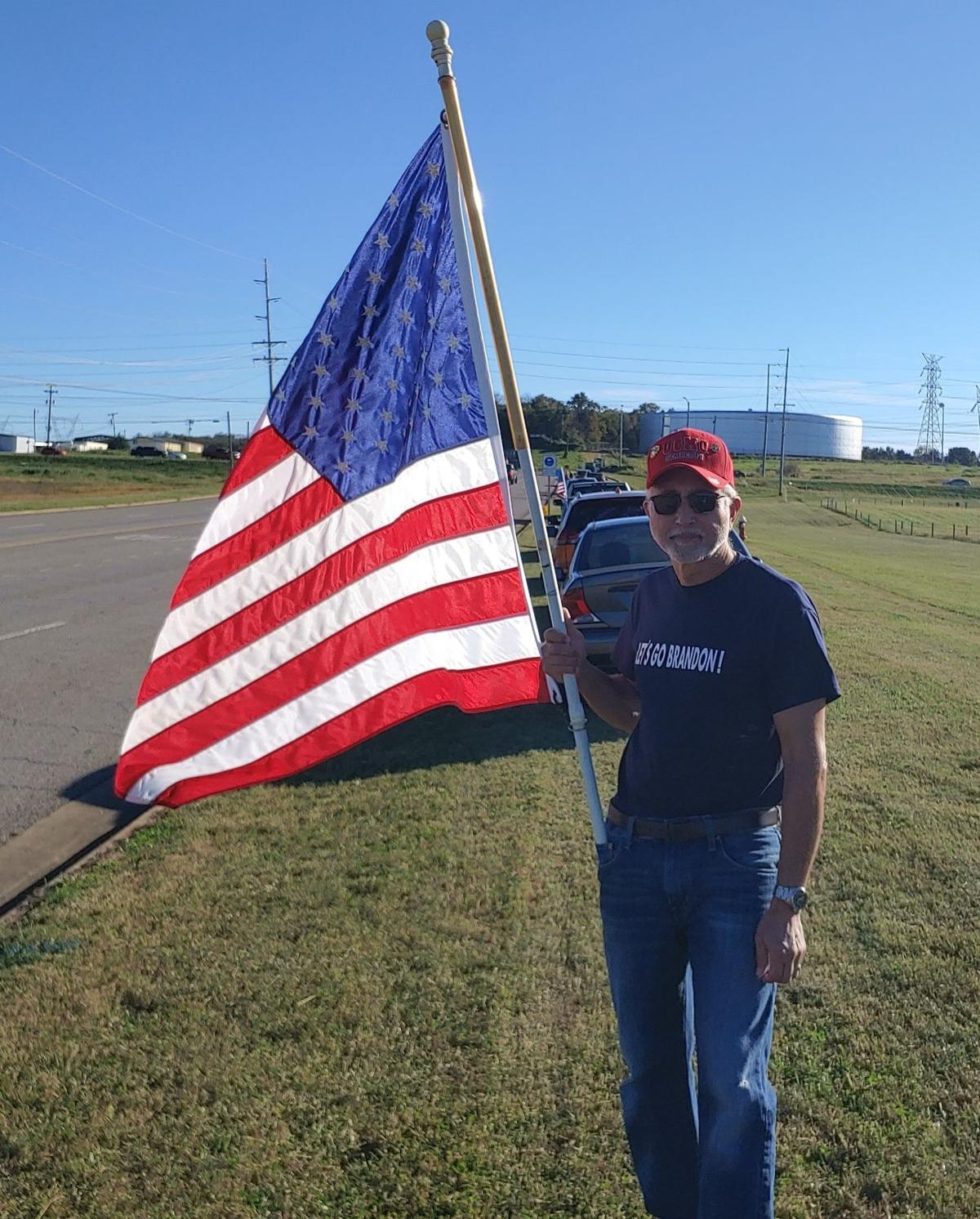 A small group of United Launch Alliance employees who protested near the Red Hat Road plant this week said their frustration was with a COVID vaccine mandate applicable to federal contractors and their inability to get exemptions from their employer.

“What I am protesting against is the fact that ULA is denying both medical and religious exemptions for all of its workers,” said Hunter Creger, an employee at ULA.

Creger said he was a Catholic and refused to get the vaccine because of reports he had read about pharmaceutical companies using aborted fetal cell lines to create vaccines.

Zach Breland, also an employee with ULA, said he was protesting for the same reason.

“I am a Christian and I’m always going to fight against abortion,” Breland said.

According to The Associated Press, no fetal cells are contained in Pfizer, Moderna or Johnson & Johnson vaccines. Testing of the vaccines, like many other vaccines such as that for chickenpox, did rely in part on fetal cell lines developed several decades ago.

Creger said his managers have been pressuring employees over vaccinations ever since CEO Tory Bruno announced the mandate in August, requiring employees to get vaccinated starting on Sept. 1.

Bruno on Aug. 20 said on Twitter, "I took this decision with great reluctance. The much higher transmissibility of the Delta variant has affected operations at the Cape & in Decatur. Without this action, we would be unable to hold our mission commitments or help keep teammates safe who cannot be vaccinated."

A spokesperson for ULA on Tuesday said federal requirements are also a factor.

"We are monitoring daily White House, Department of Defense and customer ​direction to ensure our COVID-19 policies are compliant. We have received multiple contract modifications in the last few weeks that flow from requirements to the company from our U.S. government customer that require all ULA employees to become vaccinated," spokesperson ​Jessica Rye said in an email.

Rye said the sensitivity of its missions motivated its initial decision to require its employees to take a COVID vaccine.

"The COVID-19 pandemic has affected virtually every facet of life over the past 18 months. COVID-19 also is a challenge for our business, a business that is critical to national security and civil space endeavors," Rye said. "ULA decided to require vaccinations to ensure the health and safety of our employees and to align with our U.S. government customer and industry direction. This places ULA in a much better position to meet the nation’s needs and our manifest commitments while protecting the health of everyone at our facilities."

ULA initially required the vaccine series (two doses for Moderna and Pfizer or one dose of Johnson & Johnson) to be completed by the end of this month, according to internal emails reported on by CNBC.

Breland said that management sent an email on Monday that told employees they would be terminated if they refused to receive the vaccine.

“We got an email Monday saying that as of Friday, our badges were going to be cut off if we did not receive the vaccine,” Breland said. “They’re trying to say that this is a voluntary reassignment. We’re not resigning, they are terminating us.”

Creger said he does not believe the data or health officials who stress the effectiveness of the COVID vaccines.

“I don’t trust them,” Creger said. “I may not be a health expert, but I’ve read data from all over, not just the United States. Their data contradicts the data that I’ve seen so they’re blatantly lying to me.”

Creger, who had protested near the plant Tuesday, said he was suspended by ULA on Wednesday morning.

“They said I was suspended pending an investigation but they did not give me any reason why,” Creger said.

Breland is married and has two daughters, ages 5 and 2.

“I’m sacrificing a lot,” Breland said. “I’m about to lose my job this Friday.”

William Colon said he has worked at ULA for over 20 years and that he was protesting over workers' rights.

“Ten months ago, I was an essential worker, according to them,” Colon said. “We all came to work with no vaccines and we all did what we had to do to keep this company going. This mandate is so unconstitutional and illegal.”

Colon said he filed a request for a medical exemption from the vaccine mandate on the grounds that he had antibodies that would protect him from becoming infected with the virus again after contracting it last year. He said ULA denied the exemption request.

He said he has no problem with other workers opting to take the vaccine, but believes that the company and the federal government should respect the rights of those who do not want the vaccine.

“This is not what our men and women died fighting for overseas,” said Colon, a veteran of the Marines. “They fought for the freedom to have a choice. We have no issue with anyone who wants to get vaccinated. Their body, their choice — and we have a choice too.”

Matt Griggs, a union representative for ULA with the Machinists Union, said the protest was not funded or backed by the union.

“As far as the union as a whole, it’s a pretty polarized issue,” Griggs said.

Vaccine mandates have been contentious nationwide.

A New York judge on Wednesday refused to pause a COVID-19 vaccine mandate set to begin Friday for the city’s municipal workforce, denying a police union’s request for a temporary restraining order. In Texas, U.S. District Judge Barbara Lynn said Southwest Airlines can require its 9,000 pilots to be vaccinated against COVID-19, rejecting an appeal for a temporary restraining order to halt compliance. The Southwest Airlines Pilots Association argued that the mandate needed to be negotiated as part of its collective bargaining agreement.

How long have these two clowns worked for ULA? I am retired from ULA, worked there for 20 years and I don't know them. I know Will and he is a sensible guy and I really don't understand the company's stand on him. If he can prove antibodies are in his system. It just comes down to losing a GOOD job and having to find other ways of providing for your family. They will not find another job making what they make there. They are going to drop their families standard of living because of this petty thing. Good Luck to you two knuckleheads. When you are doing research you have to find reliable sources.