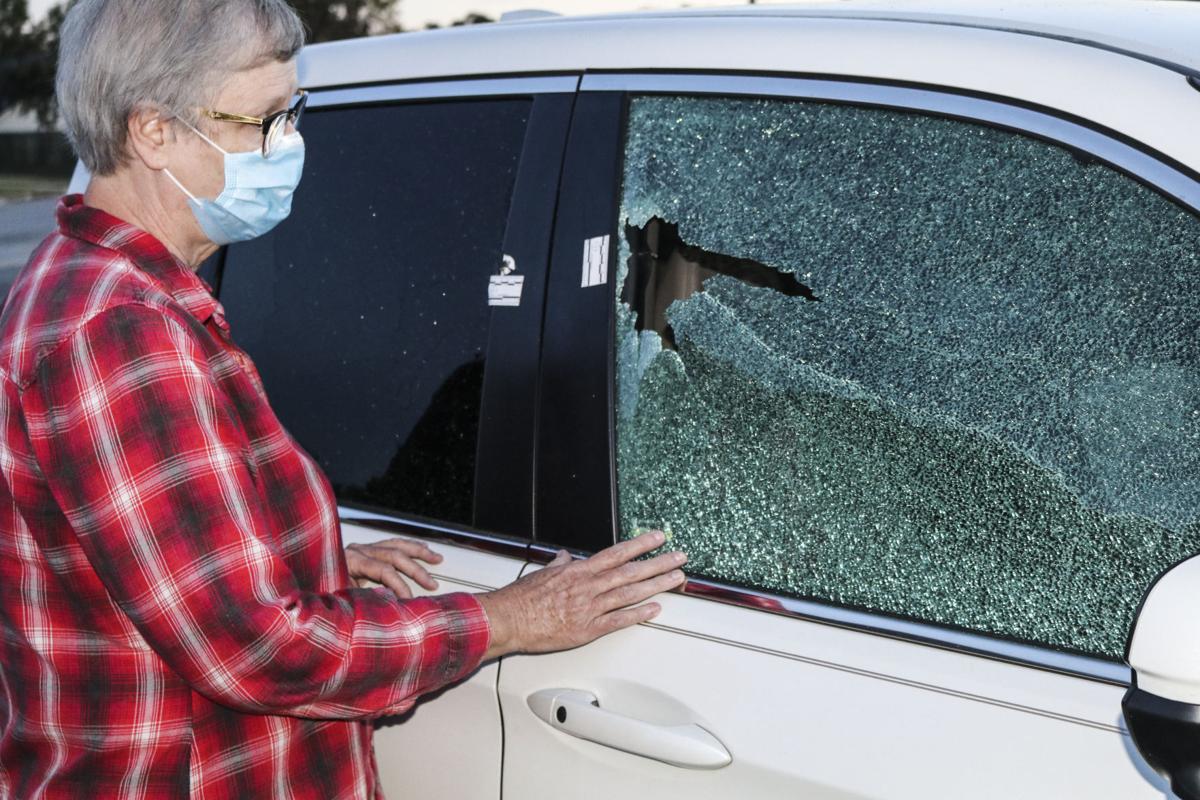 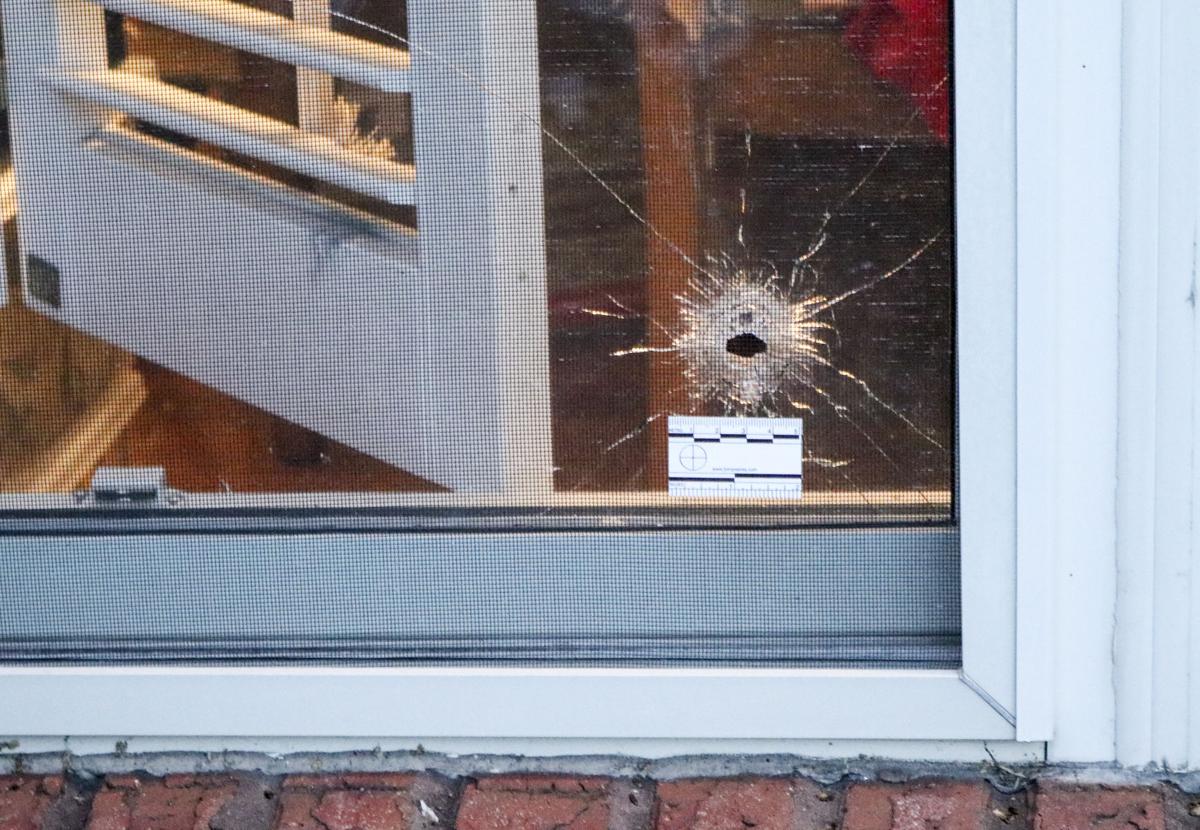 One of the bullets fired just after midnight Wednesday went through a window, through a shutter and damaged a chair inside. [ERIC FLEISCHAUER/DECATUR DAILY] 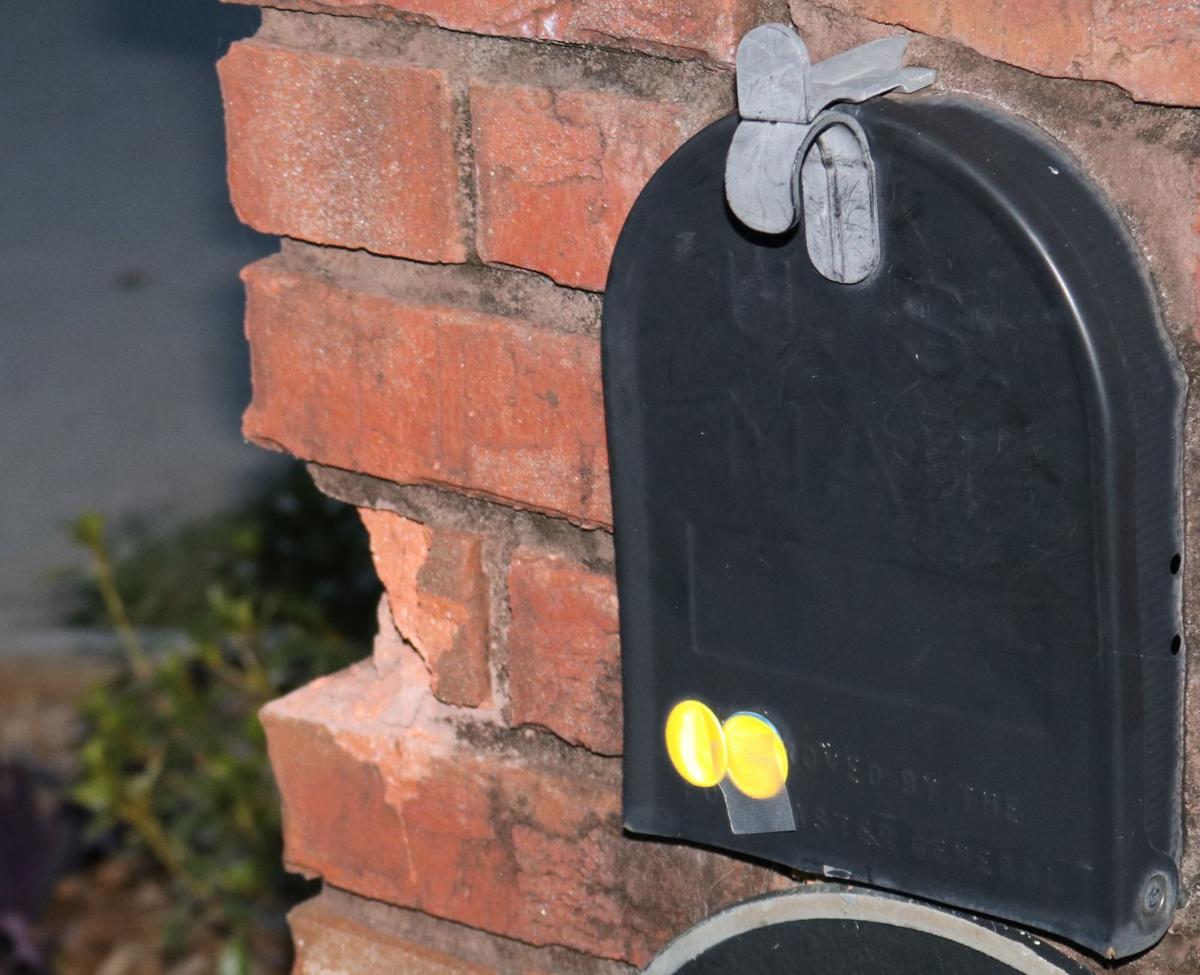 One of the bullets fired just after midnight Wednesday went through a window, through a shutter and damaged a chair inside. [ERIC FLEISCHAUER/DECATUR DAILY]

Carol Hughes had finished a 12-hour shift as a cardiac nurse in Huntsville and had fallen asleep in her front bedroom in an upscale Southwest Decatur neighborhood while watching election night results when she awoke to the sound of shots.

Lots of them, in rapid succession.

“I had turned off the TV and gone to sleep, and then a little after midnight, ‘Boom, boom, boom.’ I wake up thinking someone is setting off fireworks,” she said.

With her retired husband out of town, her son Nick Hughes was spending the night at the London Place home and was awake.

“I go in the living room and Nick’s on the phone with the police saying, ‘Someone’s shooting at our house.’ It was terrifying,” Carol Hughes said.

Decatur police Lt. Jodie Fuller on Thursday acknowledged “this investigation is ongoing,” but provided no details to The Decatur Daily.

Police who arrived at the scene recovered 18 shell casings, Nick Hughes said, and suggested the shots were fired by an AR-15.

The audio from a neighbor’s surveillance camera, reviewed by The Daily, indicated the barrage of shots was fired in about 7 seconds. The video from the surveillance camera does not show the scene of the shooting but does show what appears to be a light-colored car driving from Hughes’ house immediately after the shots are fired.

Carol Hughes’ pickup was hit multiple times, fragmenting the glass in the rear and passenger windows and flattening two tires. Bullet holes are visible in the garage door, and a bullet struck a clay planter. A bullet sheared off a brick on her mailbox. Another bullet clipped the fuel line of Nick Hughes’ vehicle, which also was in the driveway and is now inoperable.

At least one bullet entered the home, through a window on the south side of the house.

“It goes through my plantation shutter and then tears up the chair. If it had gone through (the other) window, I would have been right there,” Carol Hughes said. “I am so blessed that Nick was sitting up. It could have gone through one of these little windows and hit him in the couch, dead. Or it could easily have hit me. It was terrifying.

“I go to work tomorrow. What if I put my dogs in the backyard; are they going to be killed? Was this random? Who did this? Who would shoot 20 times? I’m having like post-traumatic stress.”

Hughes said she can’t imagine her house would have been targeted, but the idea that it was a random shooting makes little sense to her given that no other houses or vehicles on the short residential street were fired upon.

She said she had a political sign promoting Joe Biden’s presidential campaign in the front yard for several weeks before the shooting, but that she took it down at about 8 p.m. on Election Day — several hours before the shots were fired.

“I’ve been traumatized,” she said. “I don’t know why someone would do this. Was it because of a political sign in my yard? Did they shoot the wrong house? ... This isn’t a third-world country.”

She said a neighbor had seen a white car driving through the neighborhood numerous times in the days before the shooting and was worried the occupants were watching his house.

“In fact, one (neighbor) said it had parked down there. It was like casing someone’s house. They thought casing their house; it made them feel strange,” she said.

She said the neighbor has video from before the shooting that shows the vehicle, but she and the neighbor were unable to download the file from the security camera. As of Thursday morning — more than 30 hours after the shooting — Hughes said police had not examined the video.

“If the police don’t make this a priority, I fear video evidence will be lost or erased,” she said. “This was a serious crime. I could have been killed. No wonder people roll their eyes when I say the Decatur police are investigating.”

Shooting into an occupied dwelling is a Class B felony in Alabama, punishable by up to 20 years in prison.

After speaking with police, her son wonders if there's any way they can find who is responsible for the shooting.

"They said they would have to recover the gun, do a test fire on it and match the casings," he said. "This is property damage to them. It could have been a lot worse."

Barrage of gunfire in Southwest Decatur

To view security video with audio of the shots fired, visit decaturdaily.com.