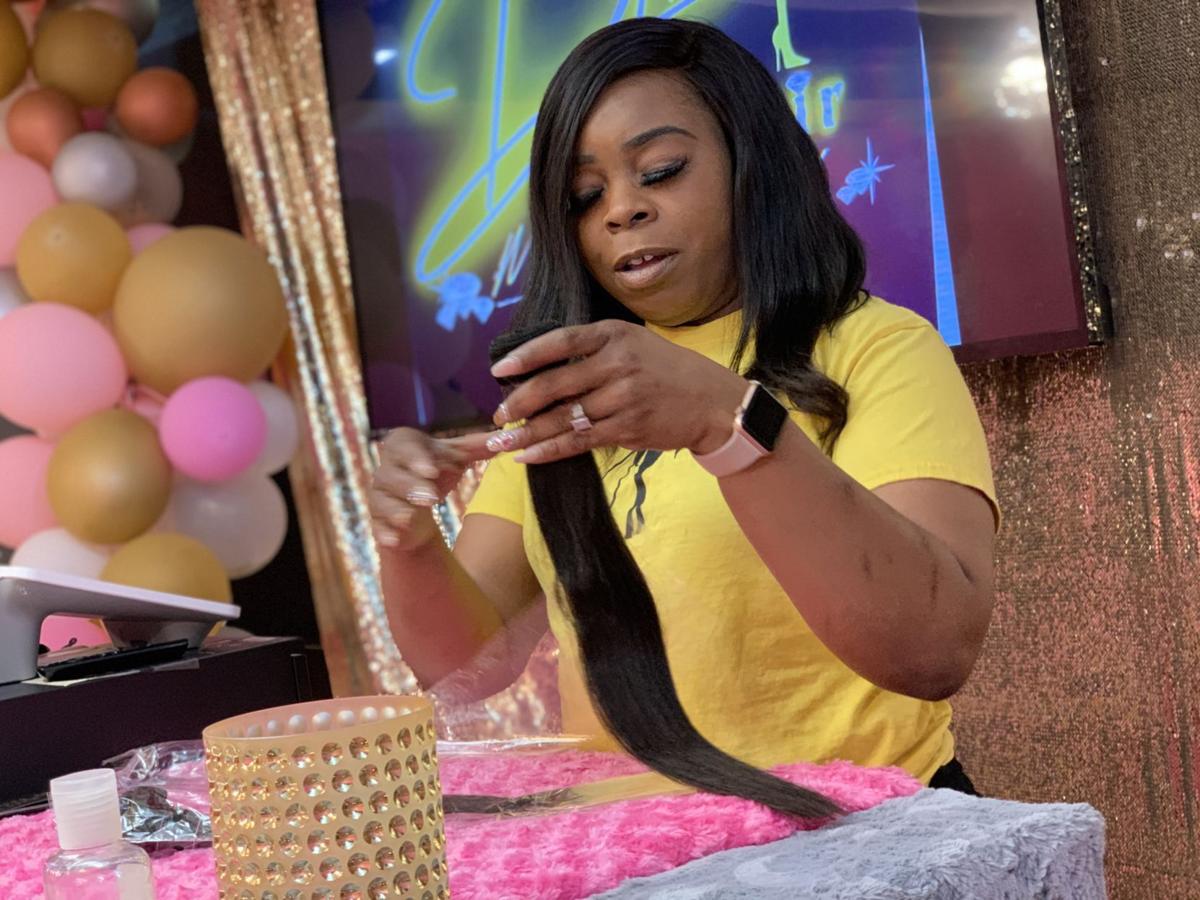 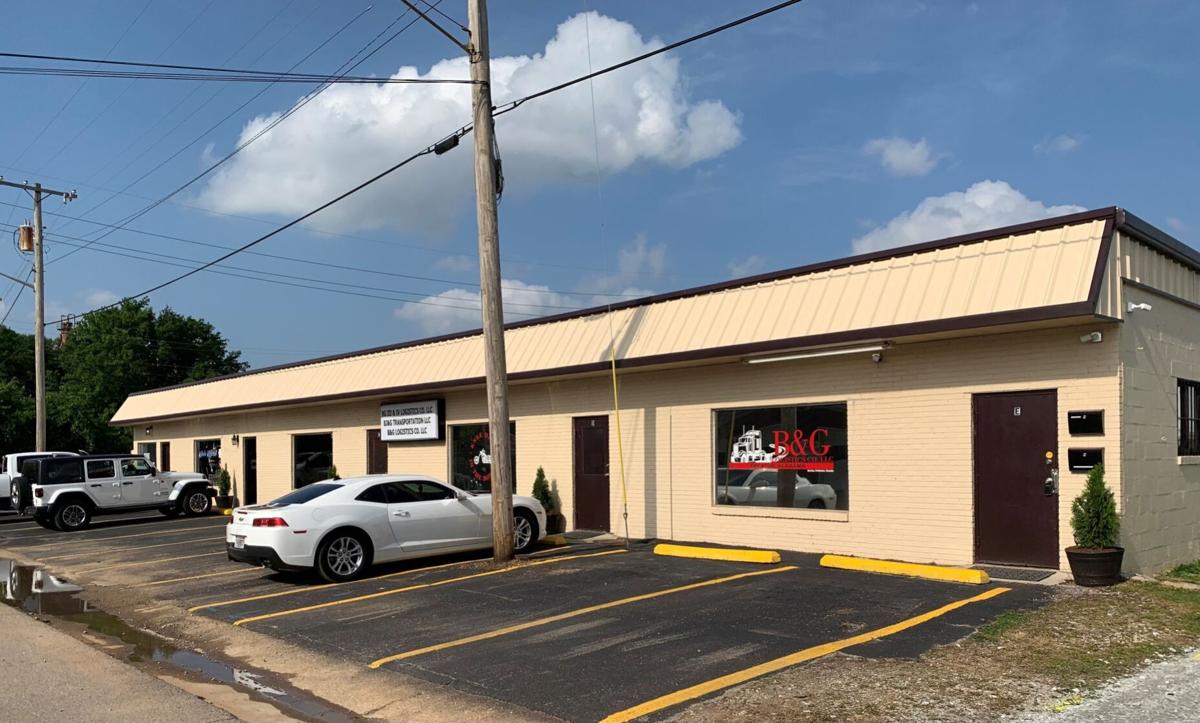 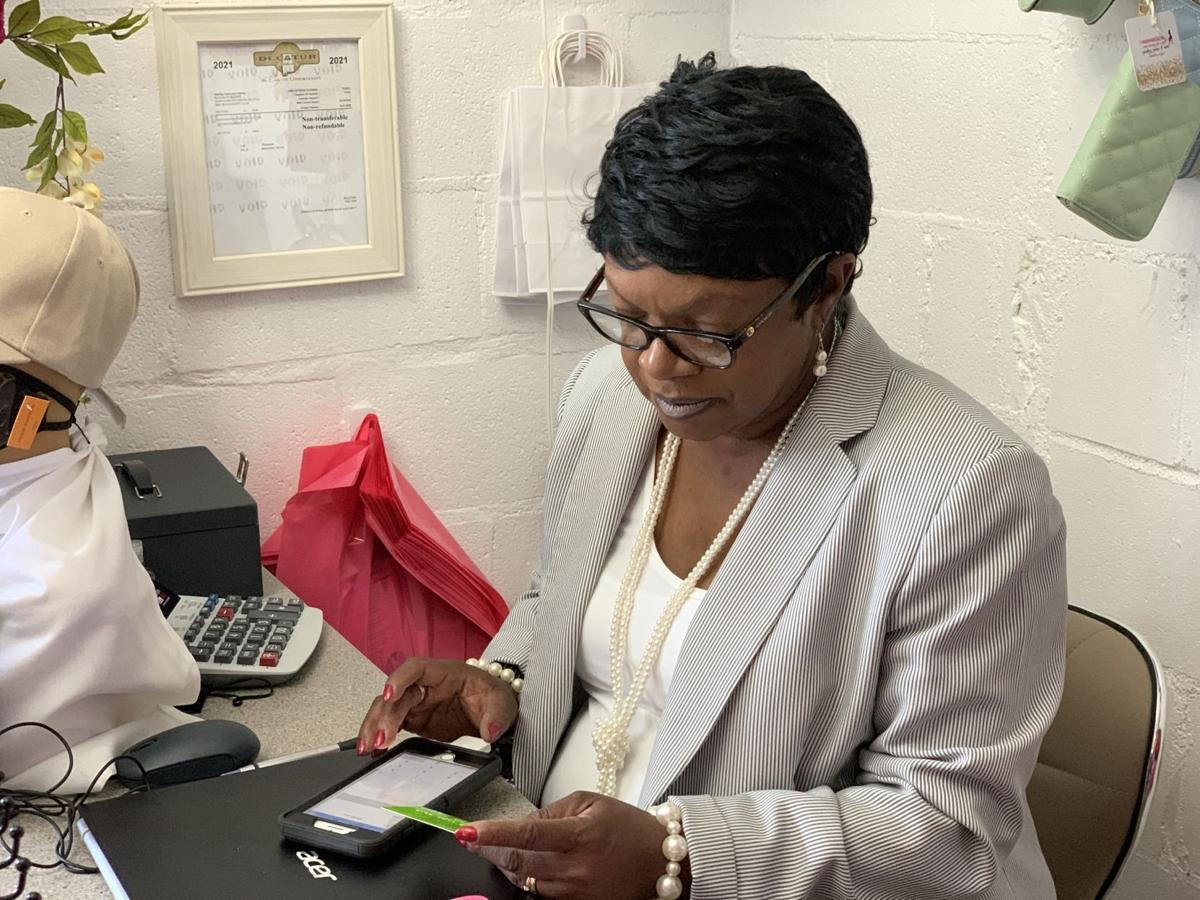 Elizabeth Raybon processes a payment last week at her businesses, a TransAmerica Insurance agency and Nannasway Boutique, which are located in a single office at Tha Yard. [BAYNE HUGHES/DECATUR DAILY]

Elizabeth Raybon processes a payment last week at her businesses, a TransAmerica Insurance agency and Nannasway Boutique, which are located in a single office at Tha Yard. [BAYNE HUGHES/DECATUR DAILY]

A dilapidated, 82-year-old building on a major Decatur corridor seemed destined for rubble until a local family led by Rodney and Tara Gordon transformed it last month into Tha Yard, a facility designed to be a home for fledgling businesses.

Located on First Avenue Southwest, along the CSX Railroad and just off West Moulton Street, Tha Yard is now home to an eclectic mix of businesses, social spots and a religious group.

The Gordons, who also own a group home business on West Moulton Street, met with their daughter and son-in-law, Megan and Hunter Shumaker, one evening to discuss the old, dilapidated building near the railroad tracks.

Tara Gordon said the family quickly caught on to her husband’s vision. Hunter Shumaker, who admitted “it was hard to see the initial outcome” during the first visit, came up with the name.

Nick Carr, owner of Carr Radiator Inc., sold the property to the Gordons in January. He said he has been in business across the street since 1966, but he doesn’t remember the original purpose of the building he sold to the Gordons. The property also includes a second, smaller building that's a former gas station the Gordons have rented out to Mario Boykins for Showtime Car Wash.

Herb Underwood, whose Brick Harvester business is across the street, said Carr leased portions of the building to different businesses, including a bail bonding company and a tree-cutting business, in the 15 years his brick recycling business has been in the neighborhood.

According to Morgan County property records, the 5,310-square-foot building that now holds Tha Yard was built in 1939. The smaller structure now holding a car wash was built in 1934. Tha Yard LLC, formed in November, bought the property from Carr for $250,000, according to county records.

Underwood said Carr’s building was empty and deteriorating in recent years until he sold it to the Gordons.

Rodney Gordon said he added some temporary 8-foot walls to create offices and retail space. Each business owner is then allowed to make changes to suit his or her needs.

“I never thought this building would be brought back to life,” Shackelford said. “Basically, it should have been condemned.”

Shackelford’s Diva Hair may be one of the most colorful businesses in Tha Yard, while Hunter Shumaker brought in a friend to paint a multi-colored logo on the wall of his trucking company, B&G Logistics.

The Gordon family did much of the work themselves, except for bringing in the occasional friend with specialized skills. For example, Tara Gordon said they needed a professional to add air conditioning to the building.

They worked hard and fast. It took 50 days from the start of renovations to the opening two weeks ago.

“We really appreciate the investment and rehabilitation of existing buildings,” Brown said. “They have greatly improved the appearance of an entryway to downtown.”

Rodney Gordon views Tha Yard as a business incubator that gives people a place to start a new business.

Tara Gordon said they advertised online for businesses and got more applicants than available space because the initial rent starts at only $300 monthly. The rent increases if the business owners need expanded space.

A difference between Tha Yard and other entrepreneurial centers is it doesn’t have a maximum length of stay for a business, Rodney Gordon said.

“They don’t have to stay here but they can stay here as long as they want. The option is theirs,” Rodney Gordon said.

However, many of the business owners see Tha Yard as a starting point and hope to outgrow their current locations.

Janet Sales, owner of Heavenly Cakes and Pies, started her business in Athens and ships desserts to Detroit, Chicago and Cleveland, but she attends church and does a lot of business in Decatur.

“Decatur people buy a lot of my desserts,” Sales said. “And I’m tired of selling out of my trunk.”

Sales said her goal is to eventually have a larger place for her business.

Shackelford said Tha Yard “is a blessing” because she was able to quit her jobs at Wendy’s and Target. She said she almost gave up on her dream of opening a business in 2019 when her mother died. She said she knew her mother wouldn’t want her to quit, however, and Tha Yard is giving her the chance to achieve that dream.

“I hope to get a good start here and then eventually move on to a larger place where I can expand and do more than hair,” Shackelford said. “I’d like to sell clothing too.”

Rodney Gordon Jr. is taking advantage of the family venture by starting his own business, Nook’s Apparel, which specializes in urban wear and casual nightwear.

“I’ve always had a thing for fashion and some of my friends urged me to start selling clothes,” Rodney Gordon Jr. said. “I love the location because we’re just across the railroad from downtown and right near the (Tennessee River) bridge.”

Not all of Tha Yard’s spaces are retail. Ponda Garth opened The Palace Event Center. Joy Cowley is using an office for Set Free for Women, a program for women dealing with addiction and emotional pain.

Charlie Townsend and Bryan Turner rented one of the larger units to use as a clubhouse for Knee Deep Bike Club. Elizabeth Raybon is operating two businesses, a TransAmerica Life Insurance agency and Nannasway Boutique, out of a single office.

Located in the city’s warehouse district, the property is 5 acres and much of it is already fenced in. Hunter Shumaker said they plan to add more rock so there’s a larger parking area for the trucks.

Hunter Shumaker said they will also store vehicles and large items in the fenced-in area for a fee.