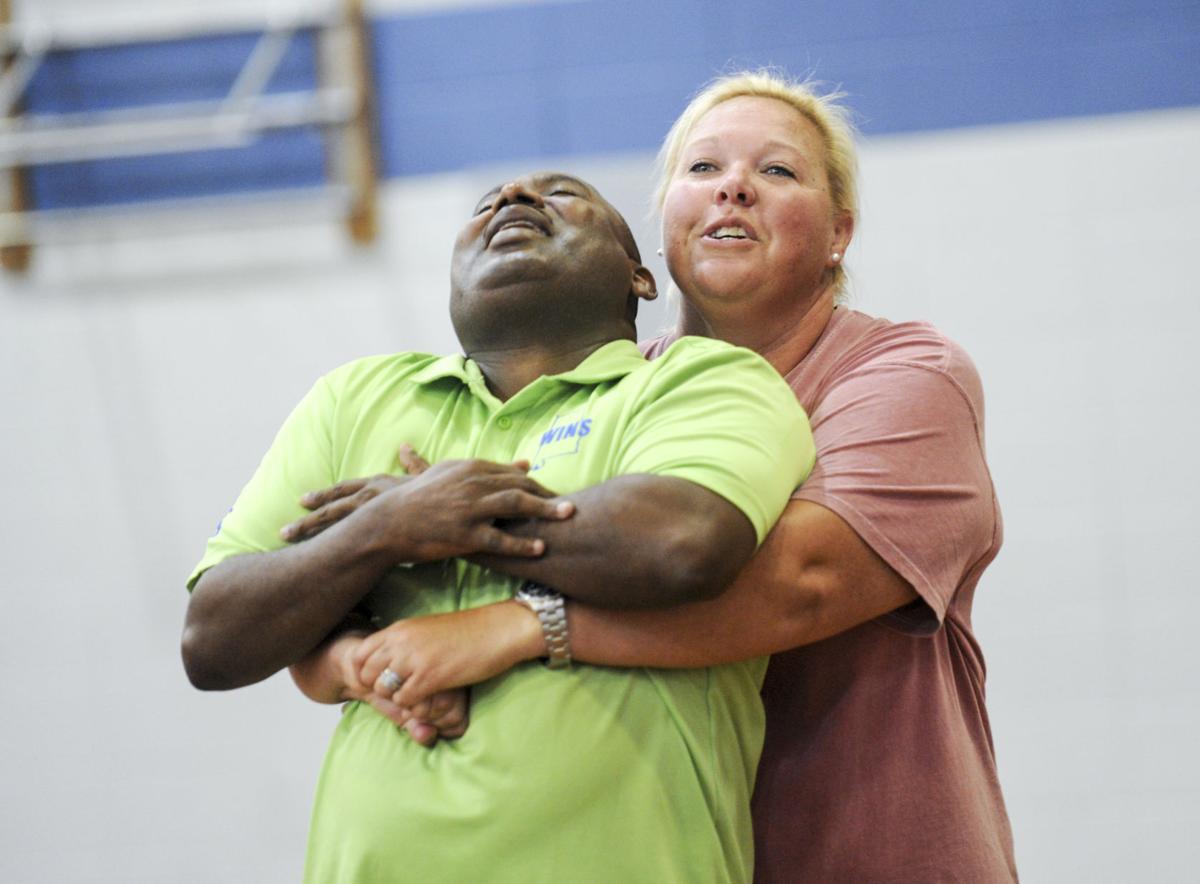 Prospective lifeguard Rico Pickett pretends to be choking as instructor Holly Lake demonstrates how to properly handle a swimmer in distress during lifeguard training at the Aquadome Recreation Center on Wednesday. Pickett was among three adults who joined three teenagers to take the training in an effort to get the Carrie Matthews Recreation Center pool opened. [JERONIMO NISA/DECATUR DAILY] 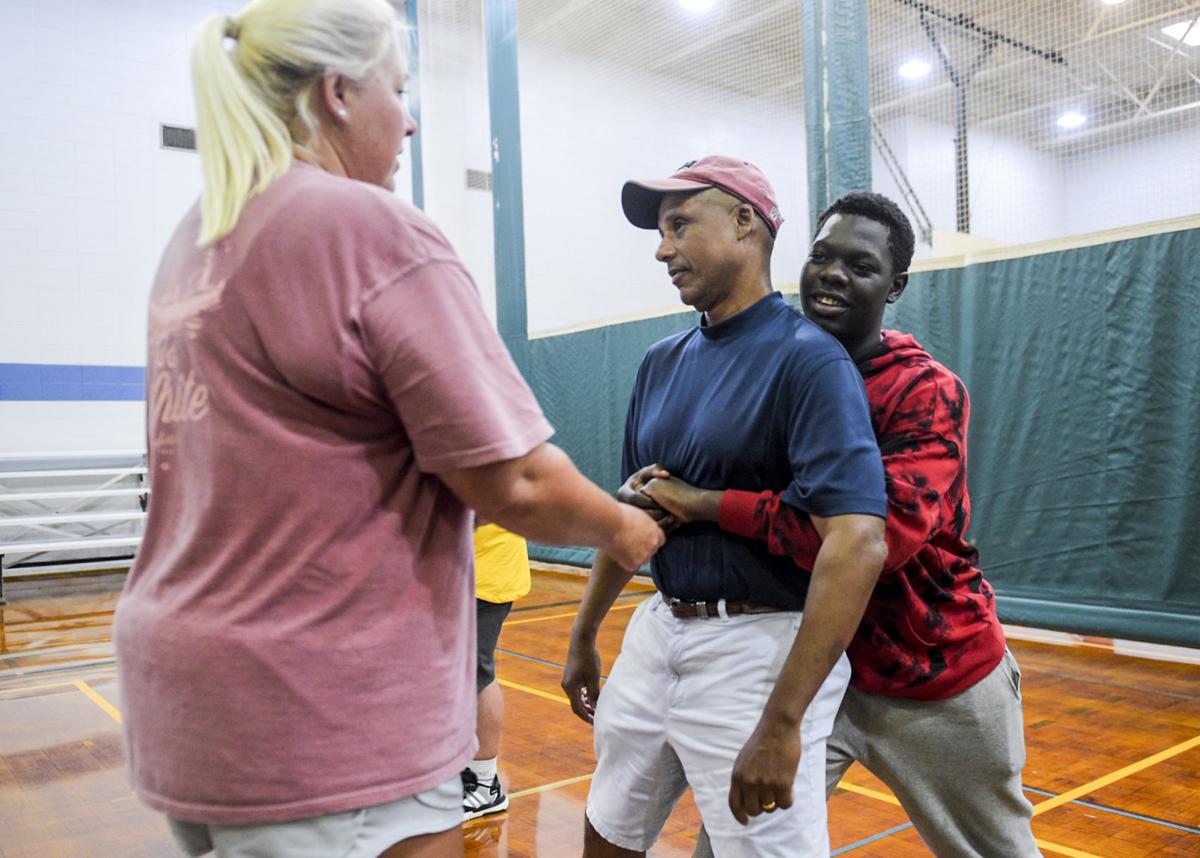 Billy Jackson, center, plays the part of a swimmer in trouble as instructor Holly Lake teaches teenager Darnel Long, right, how to properly hold him during lifeguard training at the Aquadome Recreation Center on Wednesday. [JERONIMO NISA/DECATUR DAILY] 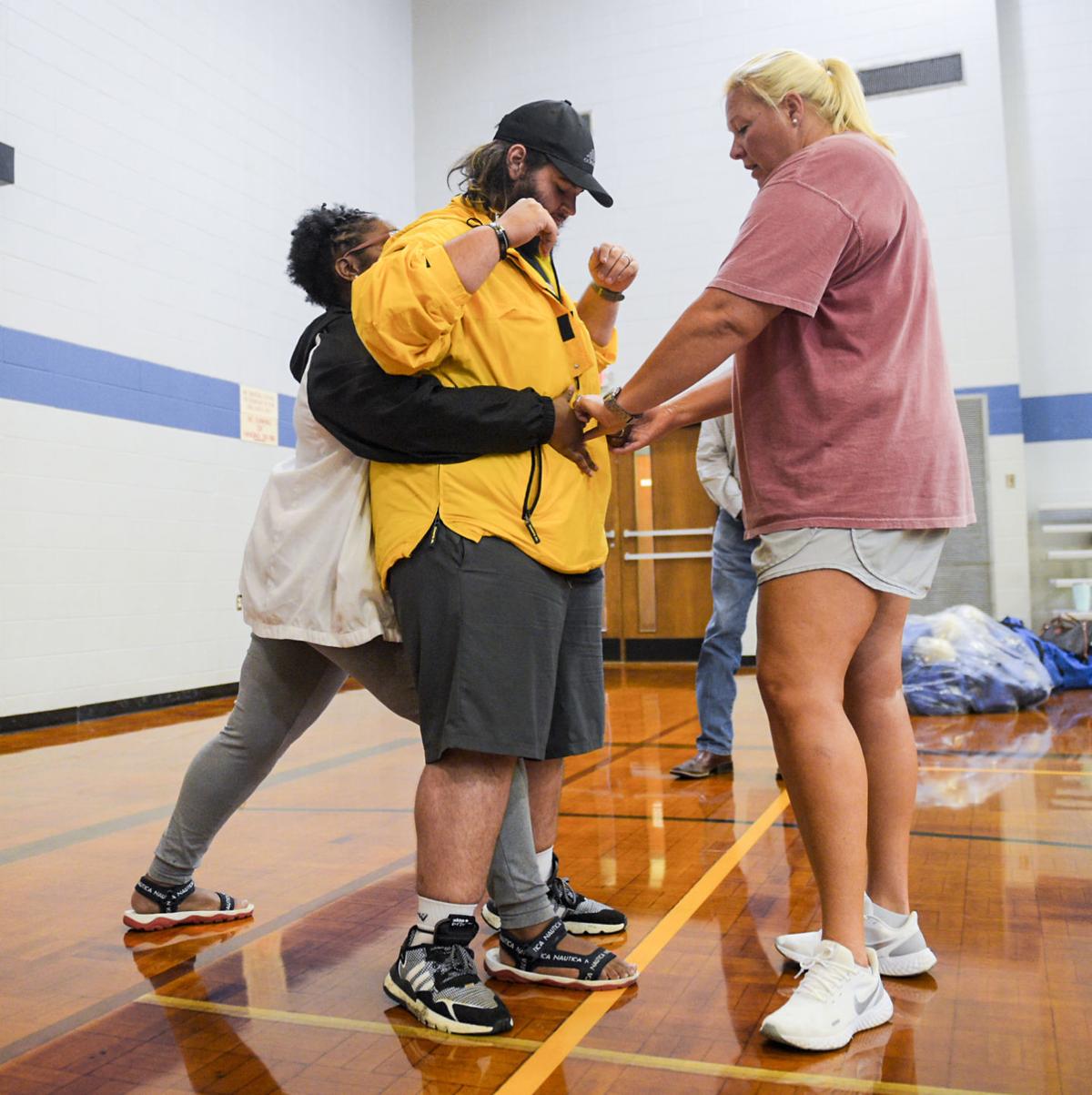 Prospective lifeguard Rico Pickett pretends to be choking as instructor Holly Lake demonstrates how to properly handle a swimmer in distress during lifeguard training at the Aquadome Recreation Center on Wednesday. Pickett was among three adults who joined three teenagers to take the training in an effort to get the Carrie Matthews Recreation Center pool opened. [JERONIMO NISA/DECATUR DAILY]

Billy Jackson, center, plays the part of a swimmer in trouble as instructor Holly Lake teaches teenager Darnel Long, right, how to properly hold him during lifeguard training at the Aquadome Recreation Center on Wednesday. [JERONIMO NISA/DECATUR DAILY]

Six people spent the past two days at the Aquadome Recreation Center learning how to roll over unresponsive swimmers and other lifeguard skills so the city can open Carrie Matthews swimming pool.

Upkeep on the Carrie Matthews pool also got underway this week, but Parks and Recreation Director Jason Lake said he still doesn't have an exact date for the pool's reopening because it's contingent on having enough well-trained lifeguards for safe operation.

“It’s possible we could open by the middle of next week,” Lake said. “But I think it will take a couple of weeks to get everybody trained.”

Councilman Billy Jackson began a push late last month to open the Carrie Matthews Recreation Center pool in a low-income area of Northwest Decatur after it didn’t reopen with the Point Mallard Aquatic Center on Memorial Day weekend. He was one of three adults who joined three teenagers for the lifeguard training Wednesday and Thursday.

Lake said he needs at least seven to eight people to complete the two-day lifeguard training to allow proper staffing. In the meantime, he has people cleaning the pool, getting the balance of water treatment chemicals correct and making sure the pool machinery works properly.

He said he would like for the new trainees to shadow the established Aquadome lifeguards “so they can get used to the rotations."

Jackson said he hopes Lake can schedule another training session for four other teenagers who couldn’t attend this week’s two-day training because of football workouts and previously scheduled vacations. A second training would give the pool 10 trained lifeguards.

“We scheduled this training so quickly they couldn’t change their plans,” Jackson said.

Lake said he wasn’t sure about scheduling a second training session for potential Carrie Matthews lifeguards.

Jason Lake’s wife, Holly Lake, was the instructor. She spent Wednesday giving the six trainees out-of-water instruction, including on cardiopulmonary resuscitation and rules of water safety.

They hit the Aquadome pool on Thursday, working on maneuvers like rolling a floating victim over, picking up a person who may have drowned from the pool floor and removing a person from the pool with a backboard.

In addition to Billy Jackson, adult trainees included his brother Lorenzo “Sonny” Jackson Jr. and Decatur Youth Services employee Rico Pickett. The three adults are volunteering their time so the pool can open. They were joined for training by Darnel Long, 16; Cole Jones, 18; and Alexis Pointer, 19.

Long said he was looking for a job when the councilman approached him about the position. He said he likes the job possibilities because “I care about people, and I want to learn how to save people.”

The Jacksons have a long history with the city’s pools. Their father, the late Lorenzo Jackson Sr., ran the Paradise swimming pool on Washington Street in Northwest Decatur during his summer breaks as a coach and teacher. The Paradise pool no longer exists.

They said their father taught most of Northwest Decatur how to swim. Both men became lifeguards. Billy Jackson, now 58, said he was a lifeguard at 15.

Sonny Jackson was a state champion swimmer for three years in a row for Austin High School before graduating in 1973.

“I really just wanted to help,” said Sonny Jackson, a retired Decatur firefighter. “But the techniques have changed so much since the last time I was a lifeguard.”

Sonny Jackson said his goal is to recertify as a water safety instructor so he can teach lifeguard training again in the future.

Billy Jackson recruited the people to become lifeguards after Jason Lake informed him in May that the city would not be able to open Carrie Matthews pool because of the lifeguard shortage.

The District 1 councilman pushed to open Carrie Matthews pool even though there will be less than a month left in the summer before school starts Aug. 5.

“I want to establish a solid basis (of lifeguards) this summer so we can get open next year and never let the pool not reopen again,” Billy Jackson said.

He said he recruited teenagers like Long as an example of what a great job working at the pool is for other teenagers in the neighborhood around Carrie Matthews.

Billy Jackson said training the football players as lifeguards will show how flexible the job is in working around their football training and practice schedule.