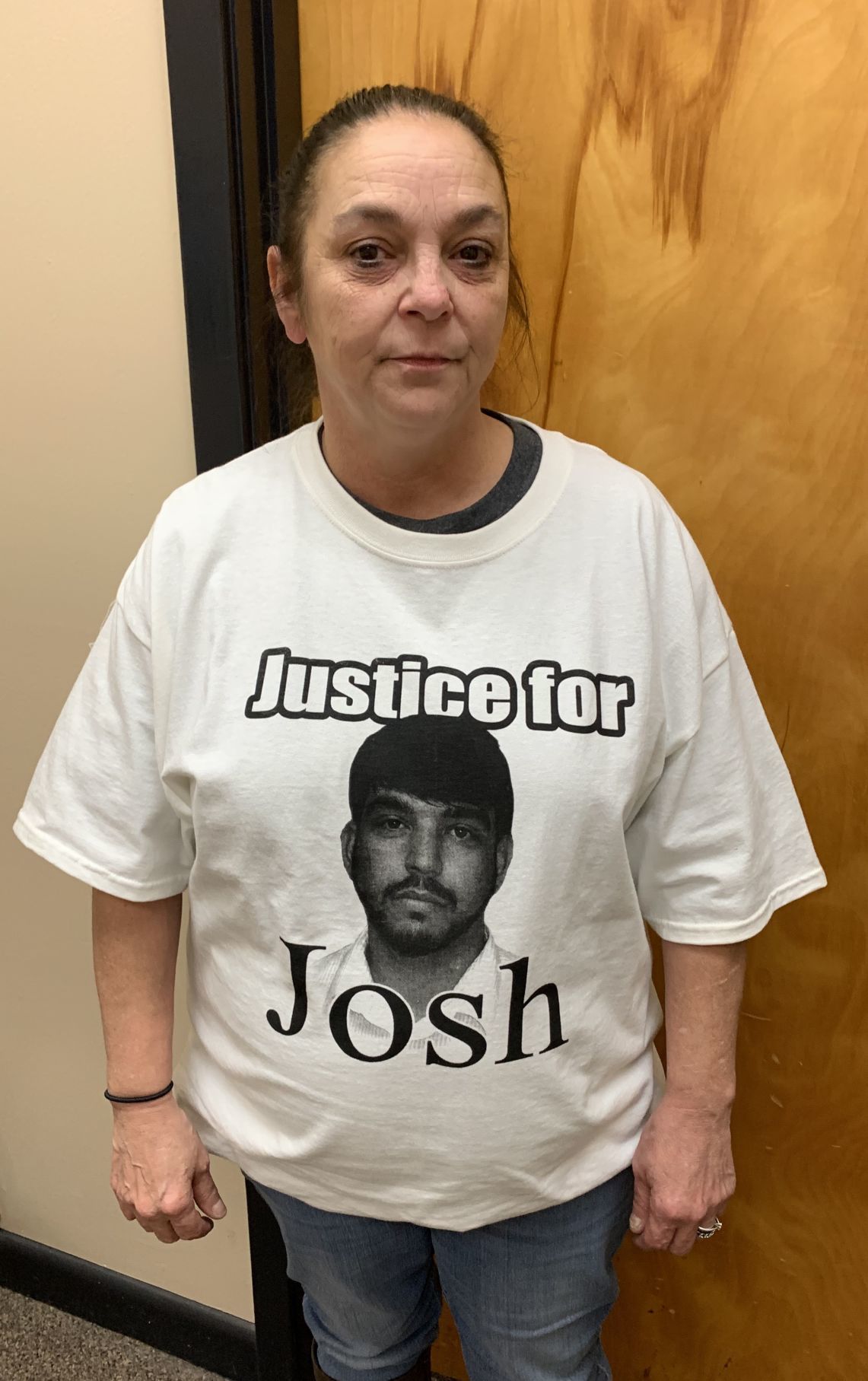 Renee Davis said she was told she had to remove a T-shirt referring to her son during jury selection Thursday in the capital murder trial of Cedric Cowan, charged in the 2015 deaths of Joshua Davis and Antonio Hernandez-Lopez. [ERIC FLEISCHAUER/DECATURDAILY] 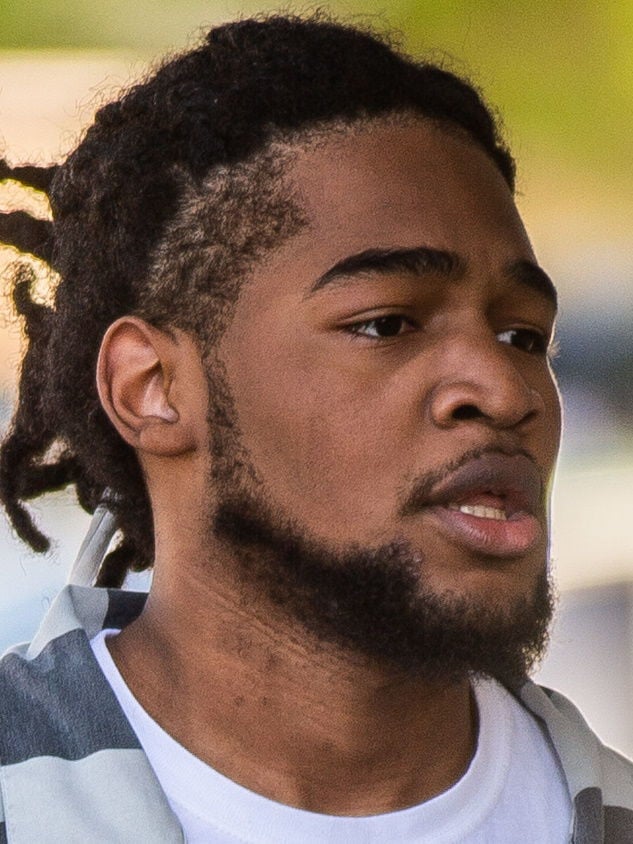 Cowan, 20, faces capital murder charges in the 2015 shooting deaths of her son Joshua Davis, 25, and Antonio Hernandez-Lopez, 27. Jury selection began Thursday and testimony is scheduled to begin Tuesday. Because he was 16 at the time of the shootings, Cowan faces a maximum sentence of life without parole. Cowan is one of four defendants charged in the murders and several robberies, and is the only defendant who has not been sentenced.

Joseph Cowan, 25, is Cedric Cowan’s older brother and is serving life in prison without parole after pleading guilty in September to the murders and several robberies that took place over the course of several days in May 2015.

Goodwin, who is serving a life sentence with the possibility of parole, testified he drove the Cowans and co-defendant Cortez Mitchell to Wilson Morgan Park around midnight on May 15, 2015, and they approached Joshua Davis, who was in the pavilion. Both Cowans had their guns out, he said, and demanded the man’s money.

“He started screaming for his dad, ‘Daddy, daddy,’ " Goodwin testified, and “Cedric started hitting him with the butt of his rifle. … Joseph walked up and shot him.”

Renee Davis, 48, said prosecutors have suggested to her a plea deal in which Cedric Cowan would serve at least 30 years in prison. She was also frustrated because she said Morgan County Circuit Judge Jennifer Howell on Thursday told her to remove a T-shirt printed with her son’s photo and inscribed, “Justice for Josh.”

She said she refused to remove the shirt, but left the courtroom.

In a text Thursday, District Attorney Scott Anderson declined comment except to say, “The judge did address the shirt issue.”

“Joshua was 25 and Antonio Hernandez was 27. I’m standing up for both of them. These were two innocent people, and they treated them like dogs,” Renee Davis said. “My son was shot in cold blood at point-blank range, and they’re worried about my T-shirt? (Cedric Cowan) sits smiling in the courtroom, and I’m the one who’s showing disrespect?”

Cowan’s defense attorneys on Wednesday filed two motions seeking to prevent information from being conveyed to the jury, either through testimony or statements by prosecutors.

One seeks to exclude Cowan’s DNA evidence, including “evidence regarding the DNA of Cedric Lamont Cowan being on the .380 handgun involved in these shootings.”

The lawyers argued that, even if his DNA is on the murder weapon, its presence there is irrelevant because Joseph Cowan already admitted he was the one that used the handgun.

“The co-defendant Joseph Cowan has admitted, and it was accepted by the prosecution at his plea hearing, that he exclusively shot the .380 during the times at issue in this case. All witnesses have testified that Joseph Cowan handled the .380,” according to the motion filed by Brent Burney and Carl Cole, Cedric Cowan’s lawyers.

In affidavits filed when the Cowans were arrested in 2015, police said the .380-caliber pistol was found at the Cowans’ home and was definitely used in the shooting death of Joshua Davis in Wilson Morgan Park. According to previous testimony, Hernandez-Lopez, while in the carport of an Albert Street Southwest home, was shot by both .380-caliber and .22-caliber bullets.

Cortez Mitchell, another co-defendant, testified that Joseph Cowan shot both men with a .380 pistol and that Cedric Cowan shot Hernandez with a .22-caliber rifle.

Potentially complicating the issue for prosecutors is that the officer who found the handgun when executing a search warrant and then swabbed it for DNA was Jonathan Lowery, who at that time was a Decatur police crime scene technician. Lowery, who is one of 65 people identified as witnesses in the Cowan trial, in early 2018 admitted to taking a gold ring involved in an unrelated case out of the police evidence room and trading it in at Mid-City Pawn.

Capt. Rick Archer in June 2018 wrote a scathing “counseling statement” to Lowery underlining the significance of the alleged theft.

“Your actions may call into question your credibility during any testimony that you may be required to provide pursuant to your involvement in any pending criminal cases and could potentially jeopardize the outcome of those cases,” Archer wrote.

Lowery initially was demoted to patrol officer, but that changed in September 2018 when Anderson sent an email to Decatur Police Chief Nate Allen, referring to Lowery’s status as a witness in another case unrelated to Cowan.

“I cannot and will not pursue prosecution in this case, or any other, wherein the prosecution is solely dependent upon Officer Lowery’s testimony or where his testimony is otherwise required,” Anderson wrote in the email. “… Personally, I like Johnny, but, I cannot, in good conscience, place on the witness stand an arresting officer or a law enforcement witness whom I know has committed a crime and for whose credibility I cannot personally vouch.”

Lowery ultimately was transferred from the Police Department and hired as a Decatur code enforcement officer.

In a separate motion filed this week, Cedric Cowan’s lawyers argued that the judge should prevent the jury from hearing any evidence about his “prior juvenile delinquent acts.” They specifically asked that the judge block the arresting officer from testifying that he was already familiar with Cowan, and that she exclude portions of a videotaped police interview with Cowan shortly after his arrest that included references to his juvenile record.

Howell last week ruled that a second videotaped interview of Cedric Cowan cannot be admitted at trial because he did not receive a required juvenile Miranda warning before giving the statement.

Also last week, the Alabama Court of Criminal Appeals rejected a petition by Cowan’s lawyers that Howell recuse herself from the trial. The motion was based on comments Howell made during the sentencing of co-defendants Goodwin and Mitchell.

“I know you weren’t the shooter, I understand that, and I don’t think anybody puts a gun in your hand,” she said to Mitchell, who received concurrent life sentences for two felony murder convictions and four concurrent 20-year sentences for the robberies. “But what keeps me awake about that is you never had to go. You never had to go the first night; and, after knowing what these brothers (the Cowans) were capable of, you went back.”

In statements to Goodwin, who is listed as a prosecution witness in Cedric Cowan’s trial, she said she believed he had been honest about what happened.

The appellate court noted a Decatur Daily article quoting Howell’s comments, but said the media coverage was not so intense as to require Howell to remove herself from the case.

The appellate court wrote that “all judges are presumed to be impartial and unbiased,” and that the defense had failed to meet its burden of rebutting that presumption.

Joseph Cowan is expected to testify at his younger brother’s trial. Howell on Wednesday ordered that he be transported to Morgan County from Kilby Correctional Facility in Elmore so he can be present in her courtroom Tuesday.