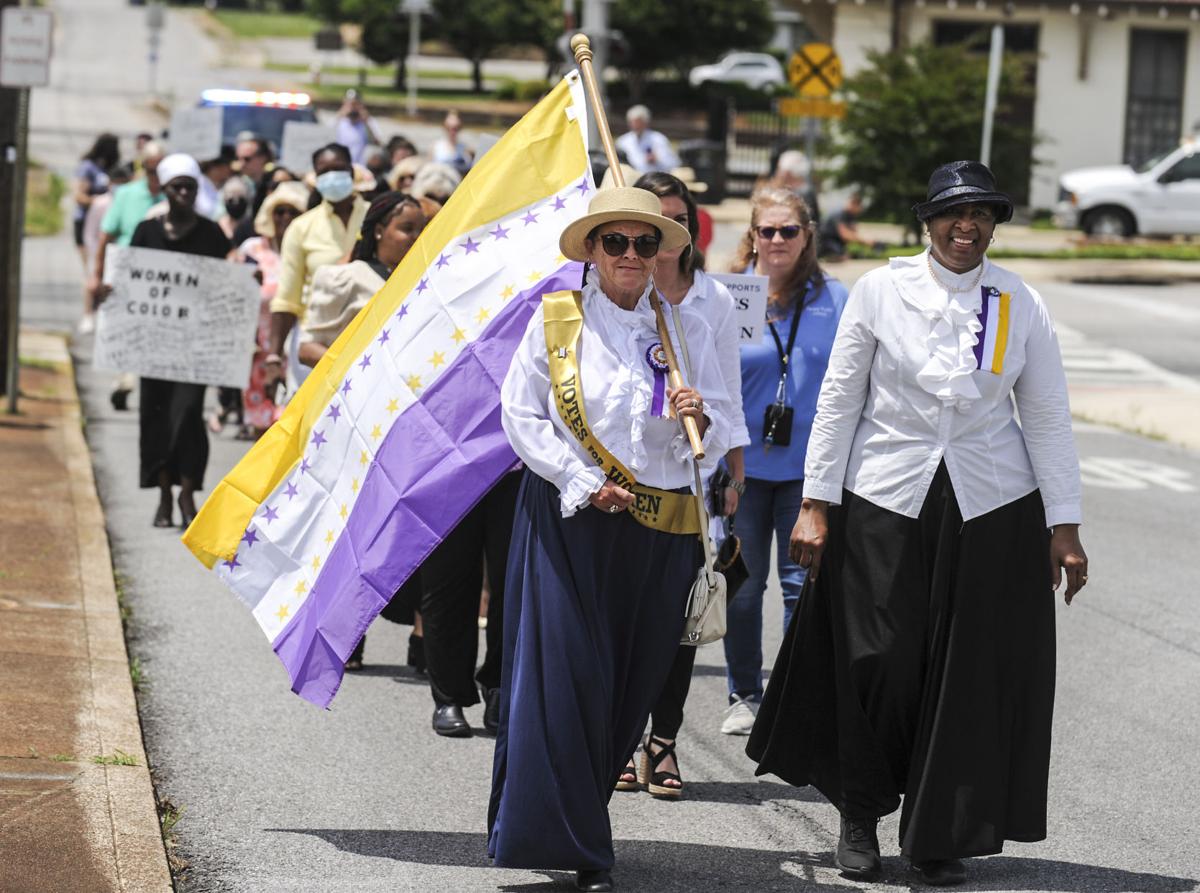 Theresa Poludniak, left, and Peggy Towns lead the march from the train depot to the spot where a historic marker was unveiled Friday on Vine and Bank streets, where Susan B. Anthony spoke in 1895. It is the same path that Anthony would have walked. More photos at decaturdaily.com [JERONIMO NISA/DECATUR DAILY] 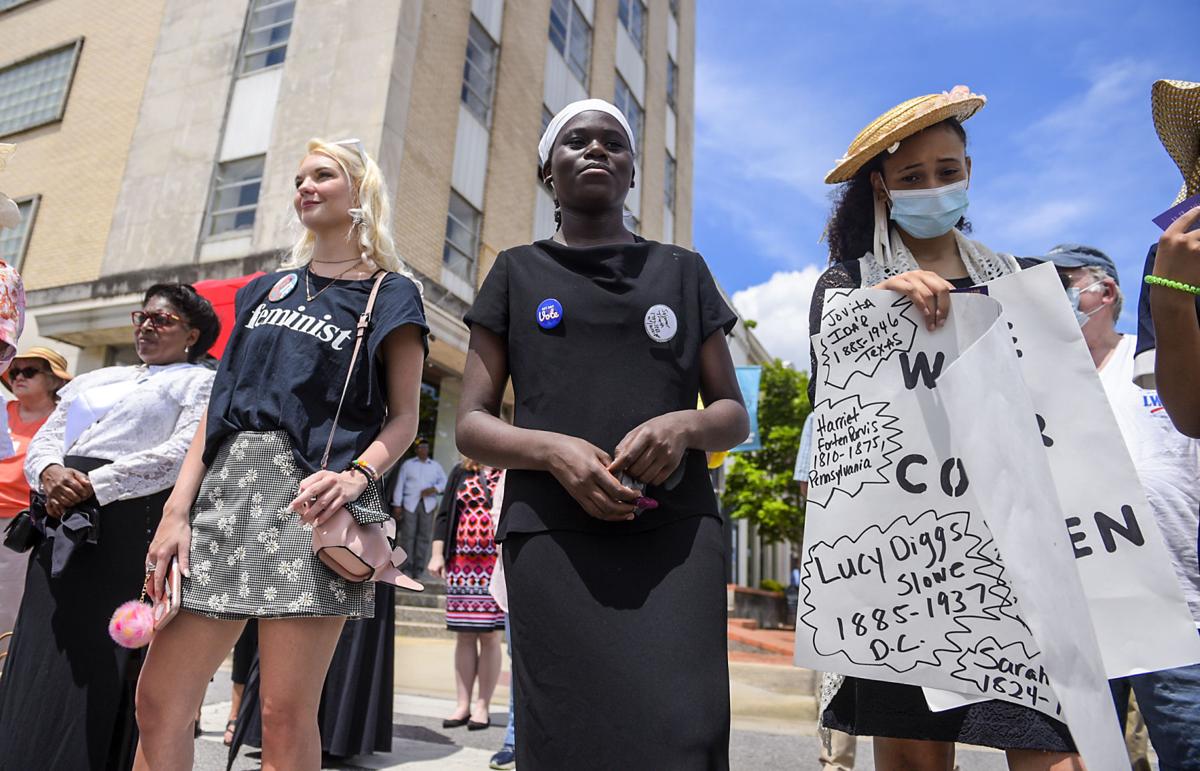 A historic marker was unveiled Friday on Vine and Bank streets, where Susan B. Anthony spoke in 1895. [JERONIMO NISA/DECATUR DAILY] 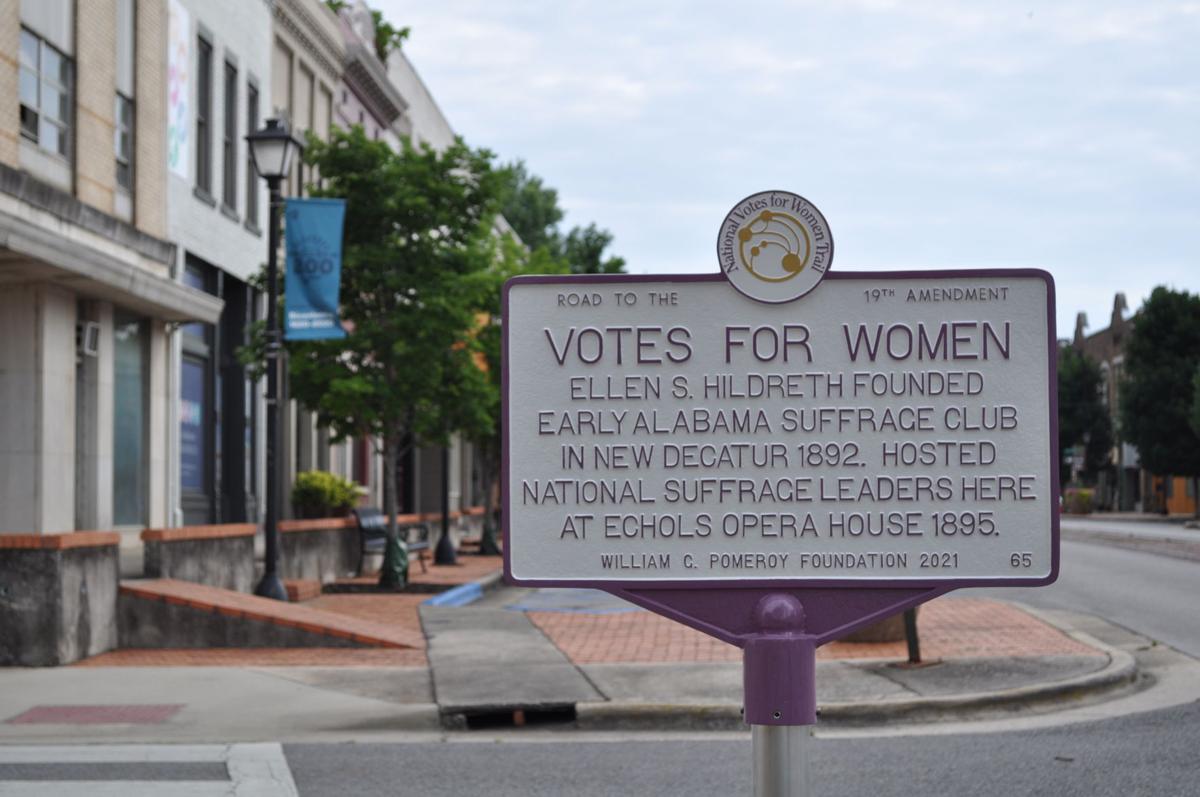 Theresa Poludniak, left, and Peggy Towns lead the march from the train depot to the spot where a historic marker was unveiled Friday on Vine and Bank streets, where Susan B. Anthony spoke in 1895. It is the same path that Anthony would have walked. More photos at decaturdaily.com [JERONIMO NISA/DECATUR DAILY]

A historic marker was unveiled Friday on Vine and Bank streets, where Susan B. Anthony spoke in 1895. [JERONIMO NISA/DECATUR DAILY]

More than 100 marchers, some wearing “Votes for Women” sashes and pins, walked from the historic railroad depot to the former site of the Echols Opera House on Bank and Vine streets — the same steps Susan B. Anthony took in 1895 — to recognize Decatur’s role in the women’s suffrage movement.

“We are here today to reflect on those women who came before us and had the courage to speak up and stand up for what was right. We are also here because we need to recognize that our journey has just begun and the fight is not over yet,” historian Peggy Allen Towns said.

The march on Friday culminated with the unveiling of a historical marker. Designed in purple and white — the official colors of the women’s suffrage movement — the sign designates the corner of Bank and Vine as a site on the National Votes for Women’s Trail.

“Decatur has such a rich history in the women’s suffrage movement. It is about time that Decatur embraces our history as we should,” said Towns, who worked with the William G. Pomeroy Foundation and the National Collaborative for Women’s History Sites to secure the marker.

Ranging from teenagers to 80-somethings, the marchers included lawyers, judges, teachers, business owners, ministers, politicians and students. Among the participants was Dorothy Gordon, who graduated from Decatur’s Lakeside High School in 1962 and voted in her first election in the 1960s.

“I am here because it is the right thing to do. We are here because of others’ blood, sweat and tears. They are why we have the right to vote,” Gordon said. “I’m so blessed to be able to take part in this.”

Karen Stanley, of Huntsville, attended the march and unveiling dressed as Ida B. Wells-Barnett, who led the Illinois delegation in the March 1913 suffrage parade in Washington, D.C.

“When I think about those women, I think about the courage and resiliency they had,” said Stanley, who developed an interest in the movement at 8 years old after hearing Fannie Lou Hamer, a civil and voting rights activist, speak. “I became inspired and intrigued, but also sad, hearing what happened to people just because they wanted to vote.”

One of the younger marchers, 21-year-old Keilee Terry, wore a “Feminist” shirt to the event.

The marker’s unveiling coincided with the 102nd anniversary of Congress' passage of the 19th Amendment, which said the right to vote should not be denied on account of sex. Tennessee became the 36th state to ratify the amendment in August 1920, guaranteeing women the right to vote.

By the middle of October 1920, over 2,000 white women and 40 women of color registered to vote in Morgan County. The women ranged in age from a 21-year-old granddaughter of former slaves to 87-year-old Elizabeth Forbes, the widow of a former slave owner.

“Abigail Adams told her husband (John Adams) to not forget about the women (in 1776). But we didn’t get the right to vote until 1920. That was just 100 years ago. It should have happened way before then,” said 13-year-old Marley Jackson, who attended the event with Decatur Youth Services’ Girls Connected for a Cause. “When I’m 18, I’ll be the first person in line to vote.”

Highlighting the city’s history, the marker notes the visit from Anthony, nicknamed the “Napoleon of the Women’s Rights Movement,” and Carrie Chapman Catt, and the influence of Ellen Hildreth, who, in the early 1890s, formed Alabama’s first suffrage club in Decatur, and served as the first president of the Alabama’s Woman Suffrage Association.

“I am overwhelmed by the turnout,” Towns said. “It shows that we are in this together and we are interested in our history and our future.”