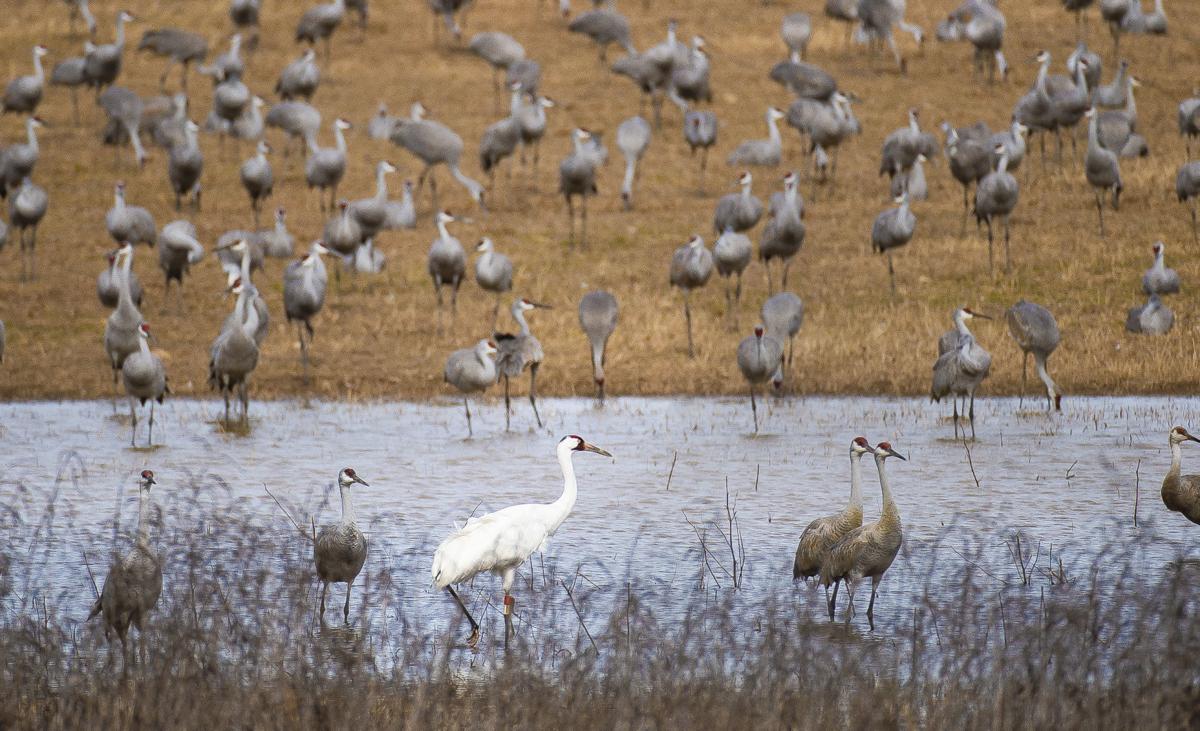 A lone whooping crane stands out among hundreds of sandhill cranes Thursday at Wheeler National Wildlife Refuge. Seventeen of the endangered whooping cranes have been spotted at the refuge this year. More photos at decaturdaily.com. [DAN BUSEY/DECATUR DAILY] 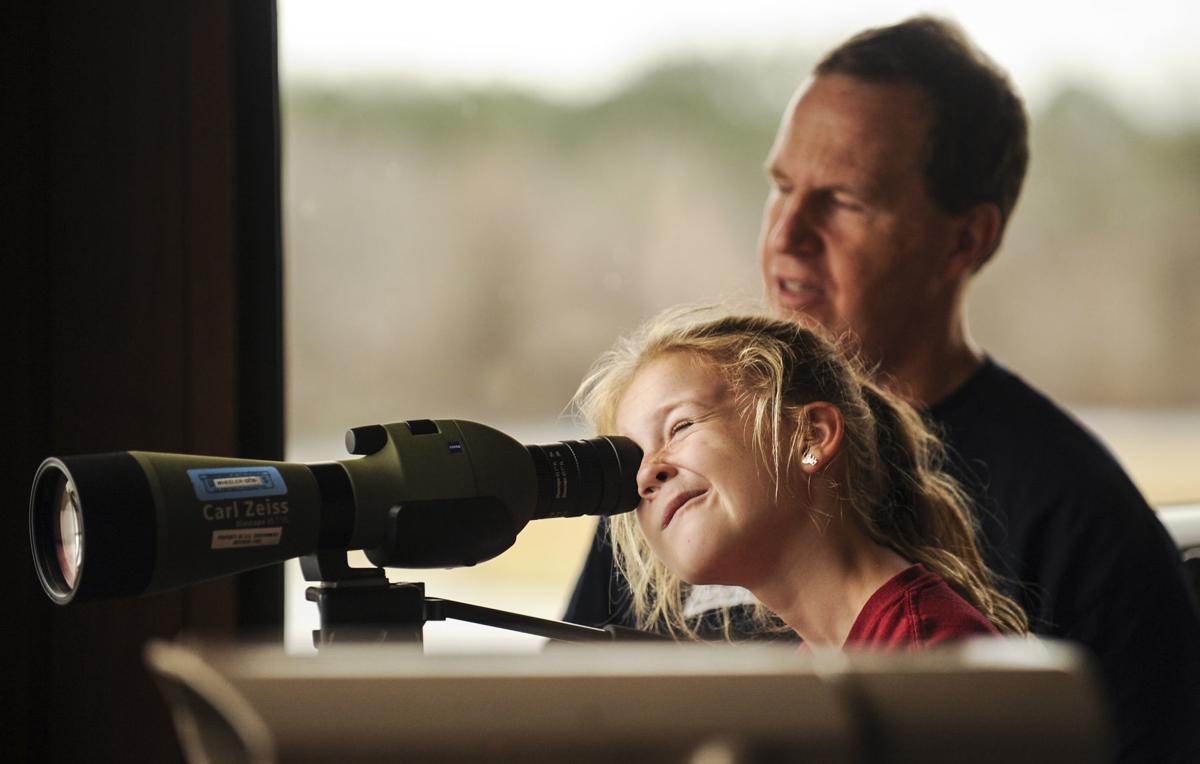 A lone whooping crane stands out among hundreds of sandhill cranes Thursday at Wheeler National Wildlife Refuge. Seventeen of the endangered whooping cranes have been spotted at the refuge this year. More photos at decaturdaily.com. [DAN BUSEY/DECATUR DAILY]

With only 85 whooping cranes in the eastern migratory pattern that stretches about 1,250 miles from Wisconsin to Florida, each of the birds is special.

So it's only natural that observers have given names like "Bo," "Latka" and "Old Bird" to three of the 17 endangered whooping cranes spotted this year wintering at Wheeler National Wildlife Refuge.

“All of the birds have their stories to tell, and the Wheeler Wildlife Refuge is the best place in the world to see whooping cranes,” Amber Wilson, a volunteer with the International Crane Foundation, said last week while speaking on the rare birds to more than 100 visitors at the Cook Museum of Natural Science.

Decatur is the epicenter of whooping crane appreciation this weekend. Events in the Festival of the Cranes, which has drawn as many as 5,000 people to the refuge to see sandhill cranes and the rarer "whoopers," began Thursday and conclude today.

“This is one of the most amazing sites of nature,” Paul Reed of Huntsville said Friday morning as he arrived at the refuge's indoor observation building with his son.

He quizzed a park employee about whether there was a whooping crane among the thousands of sandhill cranes.

“Thanks,” Reed said when she confirmed that at least one whooping crane could be seen through binoculars from the observatory.

Whooping cranes are one of 15 species of cranes and they are on the endangered list. About 826 whooping cranes exist worldwide, and the ones that migrate annually through Decatur descend from the 15 cranes that were surviving in the western flock in the 1930s, Wilson said.

Whoopers, a term used by avid bird-watchers who refer to themselves as “Craniacs,” first appeared in north Alabama in 2004 to the surprise of researchers. Seven years ago, local conservancy groups organized the Festival of the Cranes. Activities Saturday included everything from live raptors at the Princess Theatre downtown to a portrayal of John James Audubon and bird-watching at the refuge visitors center.

Teresa Adams, supervisory park ranger at Wheeler, said they conducted a waterfowl count Wednesday and determined that about 14,000 cranes were at the refuge.

Although they were not spotted on Wednesday, she said they have seen whooping cranes with some of the most interesting stories, including “Crane 13-02,” who was one of the cranes to be spotted in the Tennessee Valley area in 2004.

Old Bird is a male who was hatched in captivity on May 16, 2002, and is the only whooping crane still living among the three spotted in the refuge in 2005. He has been seen this year with his third mate.

Adams said they have also seen whooping cranes Bo and Latka, a pair first spotted associating at Wheeler Refuge in 2014.

Bo, a male hatched in 2011, was already a familiar face at the refuge when Latka was transported by airplane to Decatur in December 2014. She was originally with a group of juvenile whooping cranes introduced into the wild at the Horicon National Wildlife Refuge in Wisconsin. For some reason, the group of juveniles didn’t migrate south and park officials feared they would die in the cold.

This is when Latka was captured and released at Wheeler with a group of sandhill cranes migrating to Florida.

Bo, too, was placed at the Wheeler Refuge. He was one of nine cranes in the ultralight-led 2011 class that stopped in Winston County and didn’t complete their migration pattern to Florida. On February 4, 2012, he was crated and driven to Decatur. Bo returned every year after 2012 and met Latka in 2014.

At some point after Bo and Latka “got hitched,” she said, a younger whooping crane showed an interest in Bo, but he stayed with Latka.

Wilson said cranes are good parents who look after their young and mate for life. She said whooping cranes are easy to spot because they are a foot taller than sandhill cranes.

“Wheeler is the best place to see them,” Wilson said.