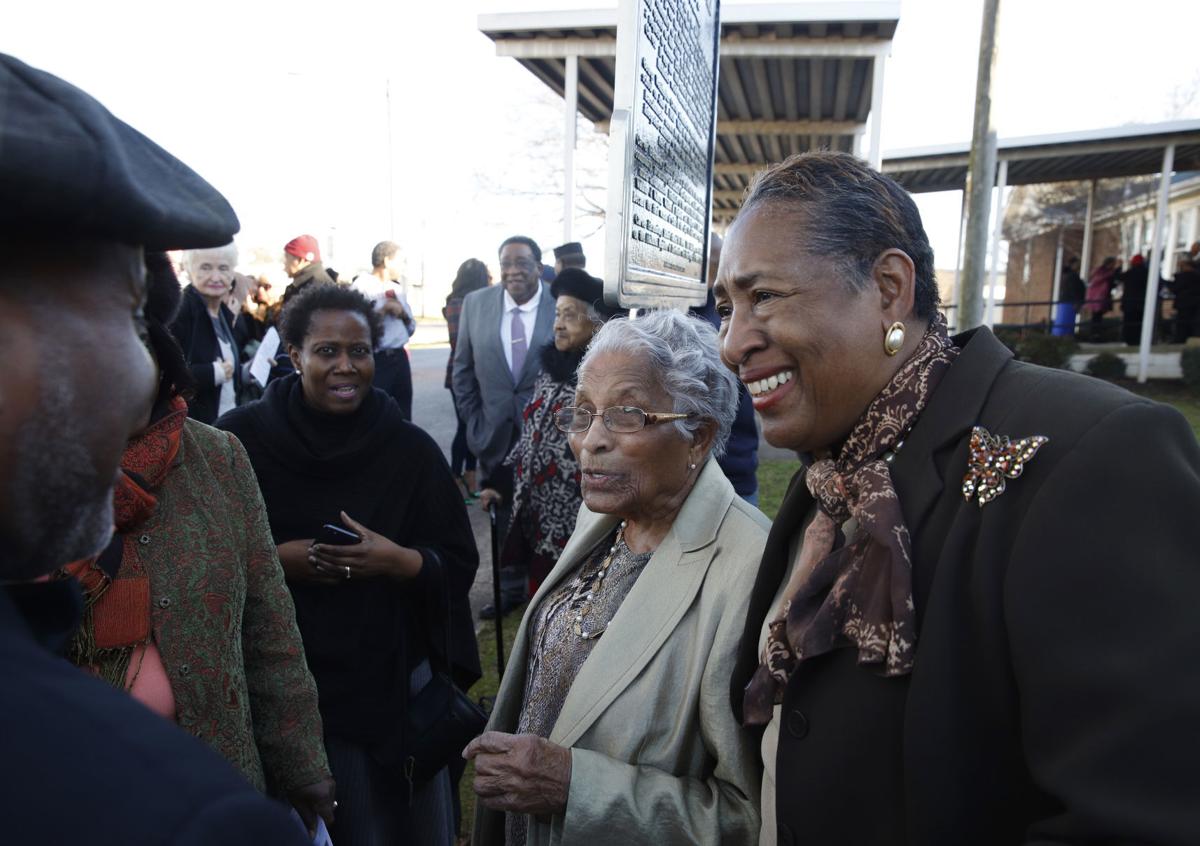 Etta Freeman, center, attended the ceremony in 1935 when George Washington Carver visited Decatur, while Peggy Towns, right, did the research that got the school named for him placed on the National Register of Historic Places. The two answer questions during Sunday’s ceremony unveiling a historic marker at the school on Church Street. [DEANGELO MCDANIEL/DECATUR DAILY] 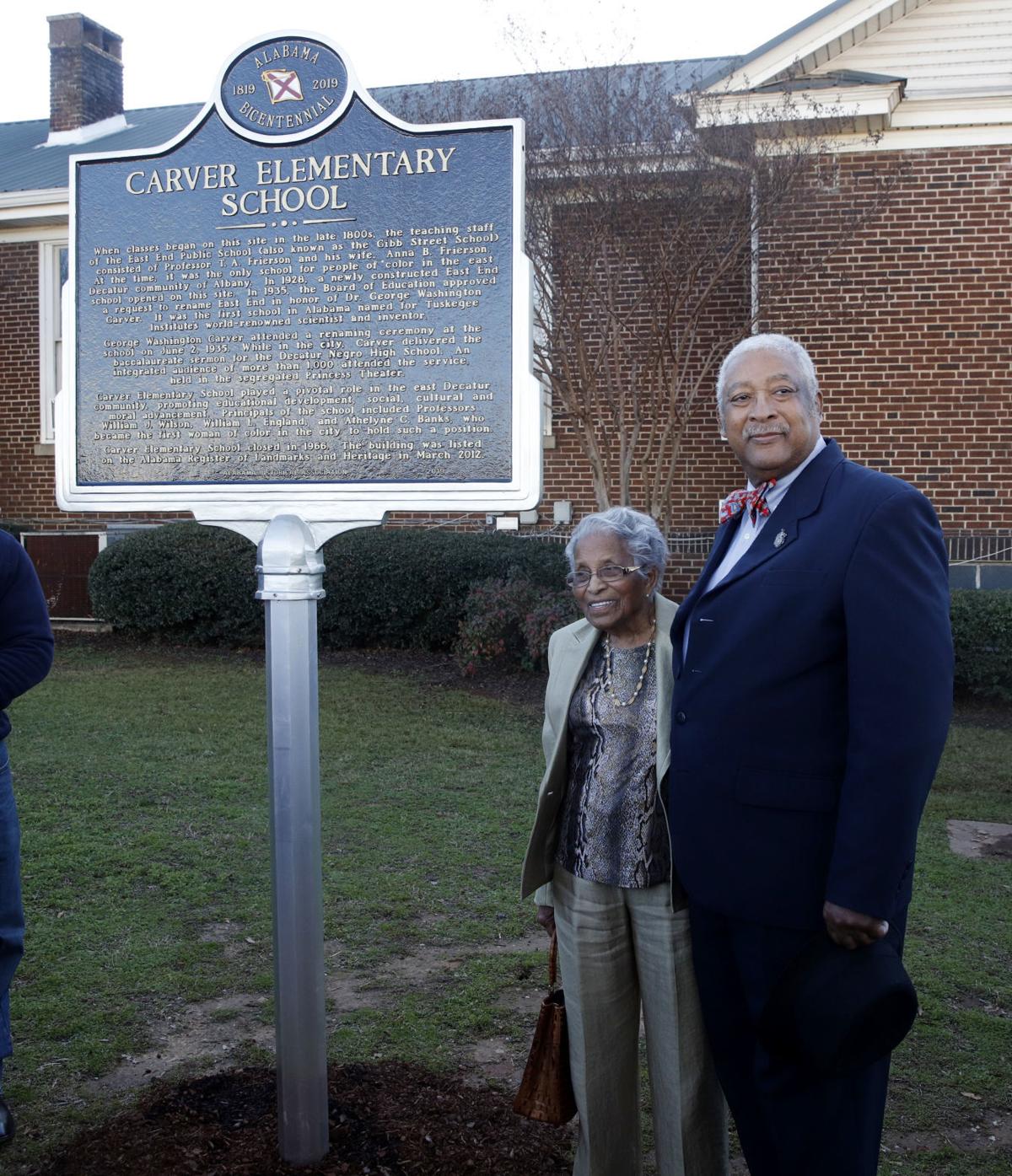 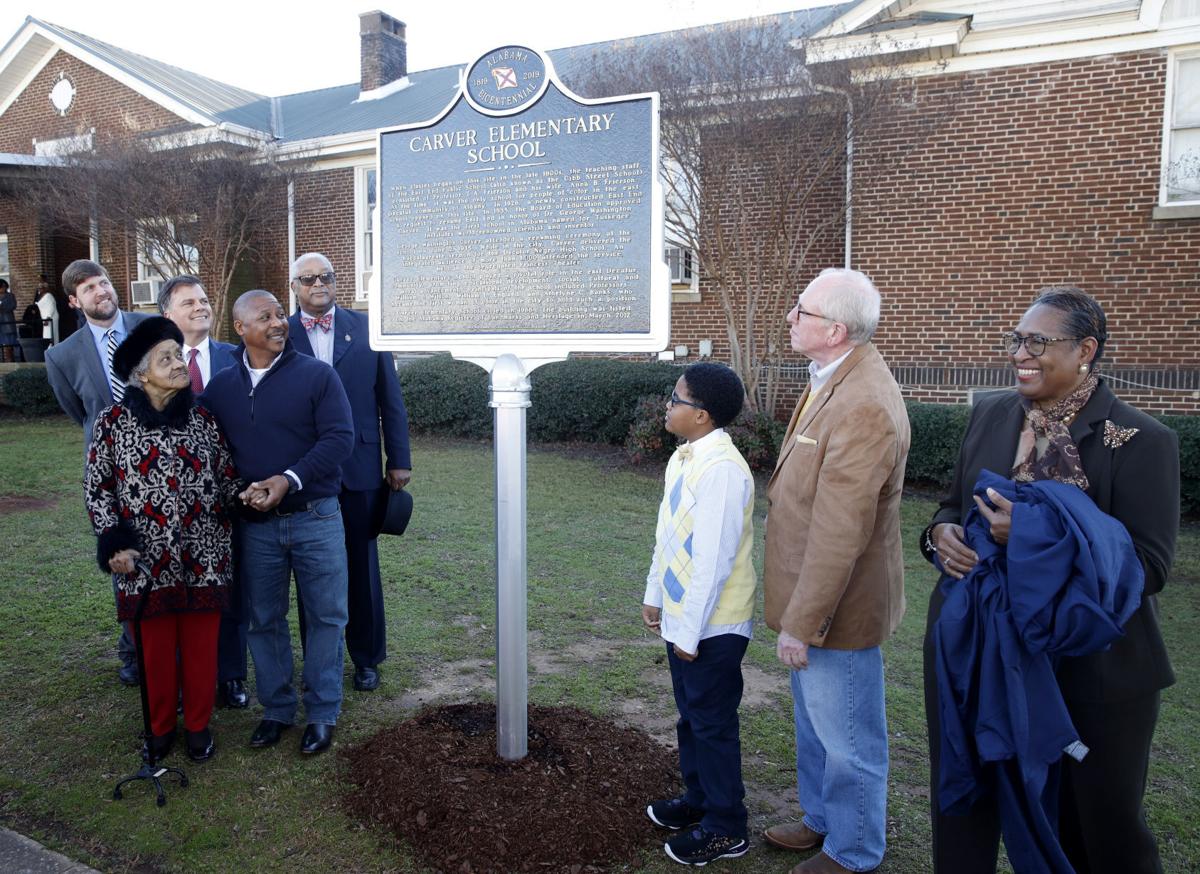 More than 200 people attend a ceremony Sunday when a historic marker was placed at the Carver Elementary School building on Church Street. [DEANGELO MCDANIEL/DECATUR DAILY]

Etta Freeman, center, attended the ceremony in 1935 when George Washington Carver visited Decatur, while Peggy Towns, right, did the research that got the school named for him placed on the National Register of Historic Places. The two answer questions during Sunday’s ceremony unveiling a historic marker at the school on Church Street. [DEANGELO MCDANIEL/DECATUR DAILY]

More than 200 people attend a ceremony Sunday when a historic marker was placed at the Carver Elementary School building on Church Street. [DEANGELO MCDANIEL/DECATUR DAILY]

Etta Freeman walked more than a mile in 1935 to see George Washington Carver speak at Princess Theatre in downtown Decatur and to tour what was then East Decatur Colored School on Church Street.

She traveled about the same distance on Sunday, but this time by vehicle.

Freeman, a retired educator who is believed to be the only person still living who saw the renowned scientist when he came to the River City 85 years ago, was among the more than 200 people who gathered for the unveiling of an historical marker at the school renamed for Carver during his visit.

“It was a lot of excitement from both the black and white people when he came,” she said, while posing for pictures with visitors near the historical marker on Sunday.

Freeman, 102, said she was a sophomore in high school and Carver “was the talk of the town” when news of his visit was announced.

“It was so many people there,” she said of his visit to Princess Theatre.

The school on Church Street still has a tablet in its bricks bearing the name of Carver, who was born a slave but became a botanist and a prominent scientist and inventor, as well as a teacher at Tuskegee Institute. His work with peanuts led to the creation of more than 100 products, including dyes, plastics and gasoline.

“The buildings and grounds are sacred and unique to Decatur, Alabama,” the Rev. Wylheme Ragland said during a 30-minute ceremony before the marker was revealed to the public for the first time.

The school, believed to be the first in Alabama named for Carver, was attended by 81-year-old Clara Jean Johnson of Decatur.

“Everybody in East Town came to school here,” she said Sunday, adding that the school was the educational hub for “so many black students in Decatur.”

Georgia Rogers said the layout of the school has changed very little since she got her first teaching job at Carver Elementary in 1958. She taught first- and second-grade students.

“I knew this school was special, and we taught the students about George Washington Carver,” Rogers said.

“This is a great day for Decatur,” he said about Sunday’s program. But, he added, it’s also sad that it’s taken so long to recognize a piece of African American history in Morgan County.

Author and historian Peggy Towns, who did the research that got the school placed on the National Register of Historic Places and the Alabama Register of Landmarks and Heritage in 2012, said Carver School sits on the highest point of Church Street and the brick building was constructed in 1927.

She said students started attending classes in the building March 2, 1928, and before being named in honor of Carver, it went by several other names, including Gibbs Street School, East Decatur Colored School and Albany Negro School. The school is known today as Horizon School.

At some point in 1938, the city of Montgomery named a school in honor of Carver, according to newspaper accounts.

This prompted an editorial appeared in The Decatur Daily saying, in part: “Decatur already has such a school, and The Daily still believes it would be a good idea to place a marker on the highway, close to the institution, so that visitors could observe it.”

Towns and Ragland said the Carver school site has more stories to tell. The marble slab above the school with his name on it, for example, was purchased by parents of students at the school. The large trees outside the school were harvested by six people in the community from the Wilder Plantation, at the site of General Electric, and planted on the school's campus.

Ragland said there was also a women’s auxiliary organization that raised money for the school and was involved with other activities in the city such as opposing the use and sale of alcohol.

“The marker is only a glimpse of Carver’s history,” he said.