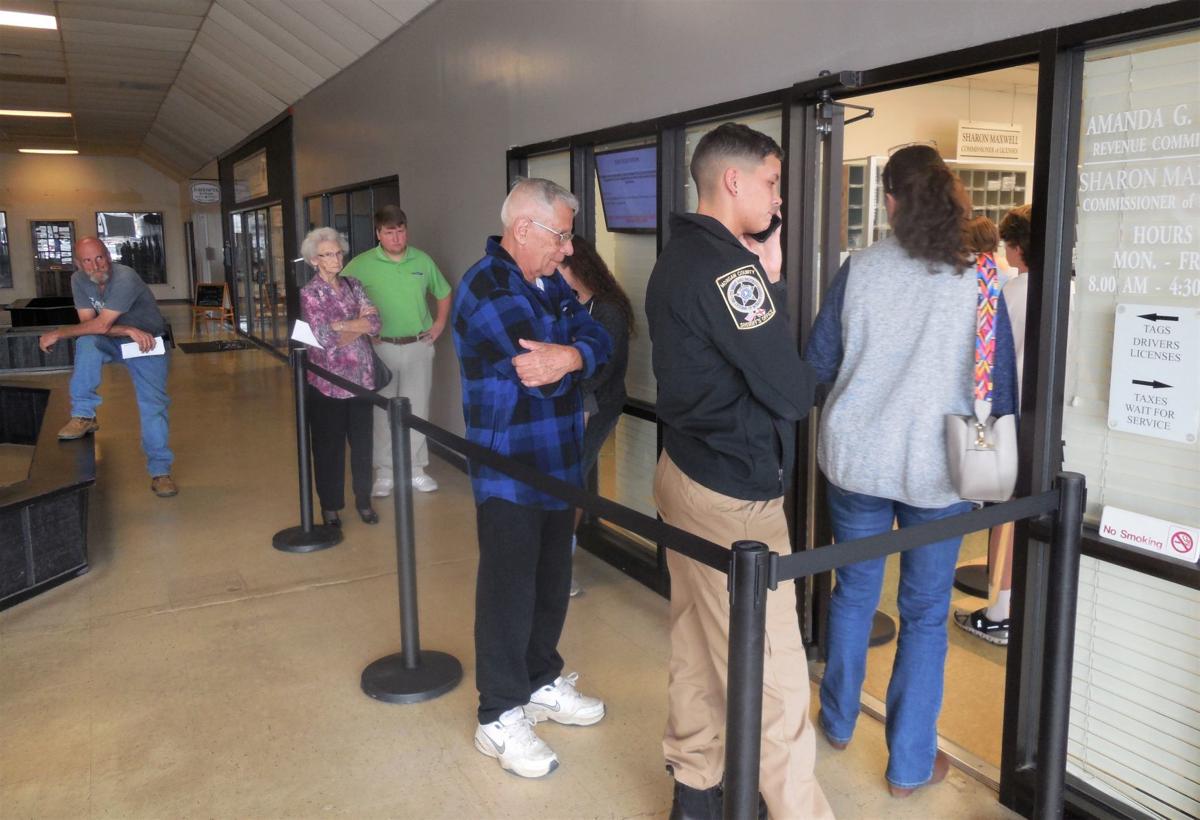 Morgan County residents wait in line last week at the Hartselle satellite office of the license and revenue departments. The county is renting a waiting room so patrons can sit during their wait. License commissioner Sharon Maxwell said she hopes to have the 40-seat waiting area open by the end of the month. [MICHAEL WETZEL/DECATUR DAILY]

HARTSELLE — John Carlin, 79, was excited to learn he won’t have to stand in line long at the Hartselle satellite office to pay for his county car tags and property taxes in the future.

Morgan County License Commissioner Sharon Maxwell said her goal is to have a 40-seat waiting room adjacent to the office in the Crestwood Shopping Center on U.S. 31 by the last few days of March.

“I’ve had to wait an hour or hour and a half here, especially toward the end of the month,” said Carlin, a retiree from Chicago who has called Hartselle home for the past 17 years. “Having a waiting room will be a big plus. That is an action that is moving the county in the right direction. I feel it’s been long overdue.”

Also in line a few people in front of Carlin on Thursday afternoon, Amy Forman of Hartselle said she is thankful Morgan County has an office for Hartselle residents and feels the waiting area will be a nice addition. She said she has been driving the 40-minute round trip to Decatur to do her courthouse business.

“I just realized the satellite office is here,” she said. “I’m buying a tag for a new truck, and if this line was long, a place to sit and wait would be nice.”

On Thursday about 1:30 p.m., Forman and Carlin were two of about 10 patrons standing, waiting their turn to conduct business.

In January, the County Commission voted to pay $400 a month for a room to be used as a waiting area. On Thursday, the commission awarded a bid of $125 a month to Keep It Clean janitorial services of Athens. District 2 Commissioner Randy Vest said Keep It Clean is the same cleaning service company that services the satellite office. Two other bids received were from Little’s Janitorial Service of Decatur ($189.95) and Ayers Services of Decatur ($400).

Maxwell said the satellite office will install a ticket kiosk when lines are long and the waiting room is open.

She said no pets or smoking will be allowed in the waiting room.

In other business Thursday morning, the commissioners:

• Adopted a resolution to allow Puckett to sell three MCC 7500 IP dispatch consoles to Morgan County 911 for $84,000, with the proceeds going into the federal inmate account. Last month the Sheriff’s Office dispatch system consolidated with the 911 office.