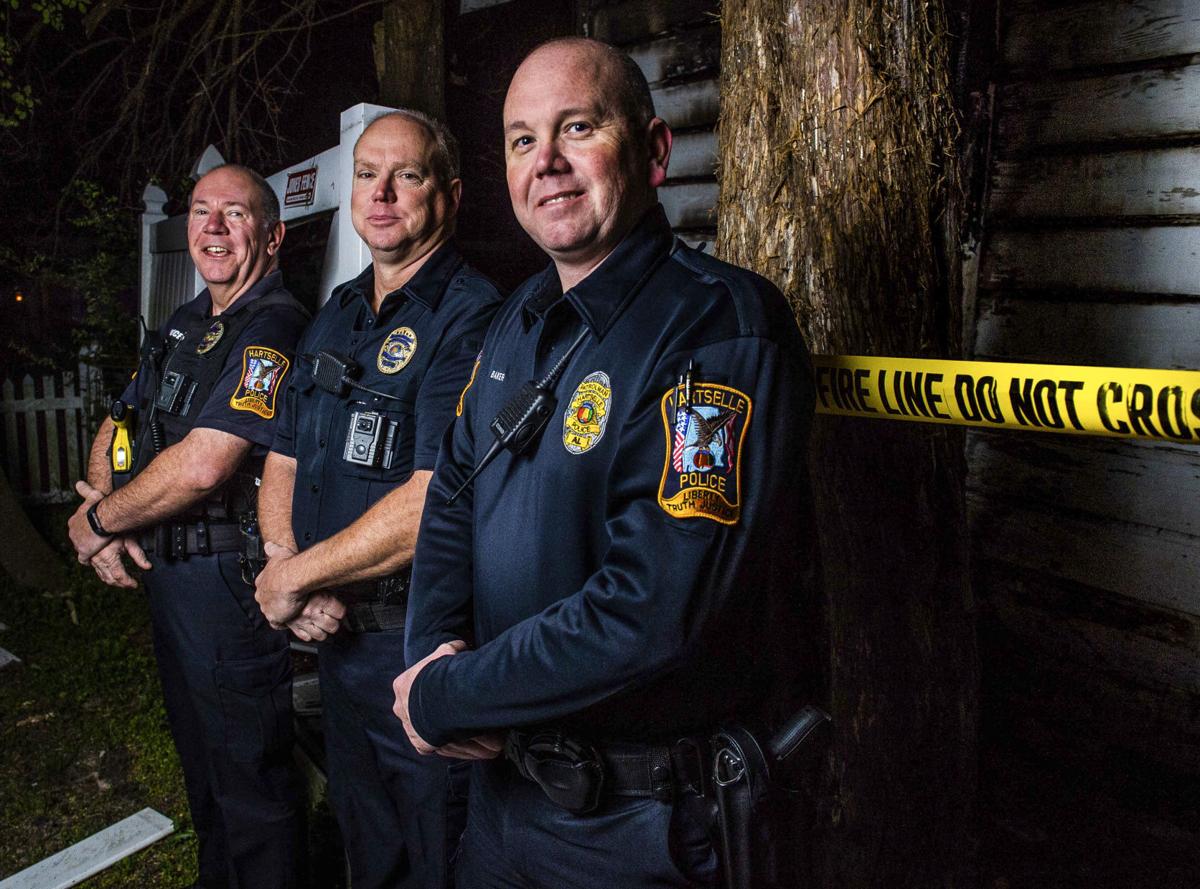 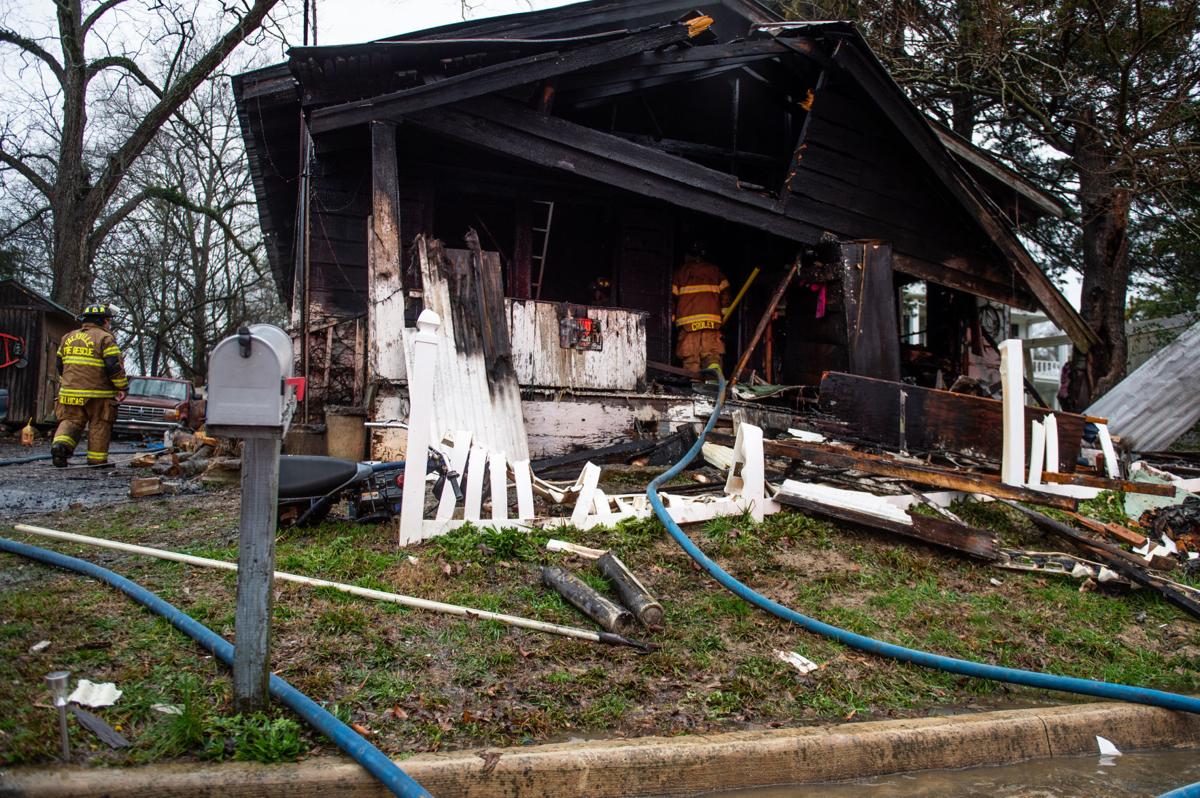 Hartselle Fire and Rescue inspects a house on Bethel Road the morning of Feb. 22 after a fire was extinguished. A woman was rescued through a bedroom window during the fire by three police officers and a Hartselle Utilities worker.  [DAN BUSEY/DECATUR DAILY]

Hartselle Fire and Rescue inspects a house on Bethel Road the morning of Feb. 22 after a fire was extinguished. A woman was rescued through a bedroom window during the fire by three police officers and a Hartselle Utilities worker.  [DAN BUSEY/DECATUR DAILY]

HARTSELLE — Two Hartselle police officers were 30 minutes from the end of their shift the morning of Feb. 22 when they heard a radio dispatch about a house fire. They immediately went to help.

A Hartselle Utilities worker spotted a woman waving for help at the same fire and also stopped to help.

Their response and actions by a third police officer resulted in the rescue of a woman through her bedroom window during a fully involved house fire.  All four rescuers will be recognized Tuesday for their efforts by the Hartselle City Council.

“If you’re going to be a public servant, this is just part of the job,” said officer Robert Baker, who has worked with the Hartselle Police Department 10 years and was the first officer at the scene.

Baker, fellow officer Roger Speake and Capt. Robert Finn said they were just doing what any public servant would do when they responded to the fire. Stephen Johnson, who has worked with HU since 2006, echoed their sentiment.

Hartselle Police Chief Justin Barley said seven people, including children, lived in the home, which was completely destroyed. He said a space heater apparently too close to a window drape caused the fire.

“Some were taken to the hospital, but no one was seriously injured,” Barley said.

This was the first time for Baker and Finn to rescue someone from a structure fire, but Speake, who has worked with Hartselle police for 22 years, rescued people from an apartment fire in Hartselle a little more than a decade ago.

Barley said officers put their lives on the line every day, but what impressed him about the rescue near Bethel Road and Main Street was how quickly the officers came together as a team and pulled the woman out of the house.

“There was a level of danger, but they didn’t think about that,” he said, pointing out that the officers immediately went into action to rescue the woman after learning that she was in the home.

Johnson, who lives near Interstate 65 and was on call for HU, had been out checking flooded areas in the city and was headed back from his home to HU headquarters when he spotted “a lady standing outside waving her arms and screaming.”

He was in his utility vehicle.

Johnson said some of the children in the home were in a resident’s vehicle, but the woman he didn’t know told him two people were in the home and couldn’t get out.

“I could hear them, but I couldn’t find them,” he said. “The flames in the home were spreading quickly.”

Baker said they were about 30 minutes from a shift change when radio communication came in about the house fire. He and Finn were at department headquarters and decided to go to the scene “just to see if we could help.”

Baker said he assumed everyone in the home was out because a lot of people were standing outside. So, he used his patrol vehicle to block traffic from turning onto Bethel Road from Main Street. Finn drove further past the home so he could control traffic down Bethel from Hartselle High.

Baker said everything changed when he exited his vehicle and Johnson told him two people were still in the home.

He immediately sprinted toward the home, yelling to Finn that “people are still inside.”

Because of the small lot and intensity of the fire, Johnson, Finn, Baker and Speake had to tear down a neighbor’s vinyl privacy fence because this was the only way to get to the bedroom where family members said a woman on oxygen was inside and couldn’t get out of her bed.

Johnson said all he saw through the window was an “over-size, disabled woman lying on a mattress in the floor.”

About five minutes after Johnson and the officers got the woman about 20 feet from the home, the area in the bedroom was burning.

“She is the hero,” Baker said, referring to Goodwin because she busted out the window and stood near the burning home until they arrived.

“We were just doing our job,” Speake added.

Finn, who comes from a family of law enforcement officers, said: “You always think about your safety, but the safety of the people we serve comes first.”

Johnson said he was raised to help others and the “Good Lord” put him in the right place that morning.

“I would put myself in harm’s way before I let a child get hurt,” he said. “I didn’t do anything for that family that I wouldn’t do for anybody else.”

About 30 minutes after officers pulled the woman from the home, an oxygen tank inside the home exploded with a force strong enough to knock some firefighters off the porch.

Baker said they were back at the station about two miles away and could hear the explosion.

Barley said what the officers and Johnson did is public service at its best.

“I know they’ll say they were just doing their jobs,” the chief said. “While this may be true, how they came together as a team to accomplish what they did is remarkable.”

I drive by this location daily and have seen the children playing in the yard next door for the past few years. Is there a local bank taking up money to help this family?

Who should be the front-runner for the Republican presidential nomination in 2024?