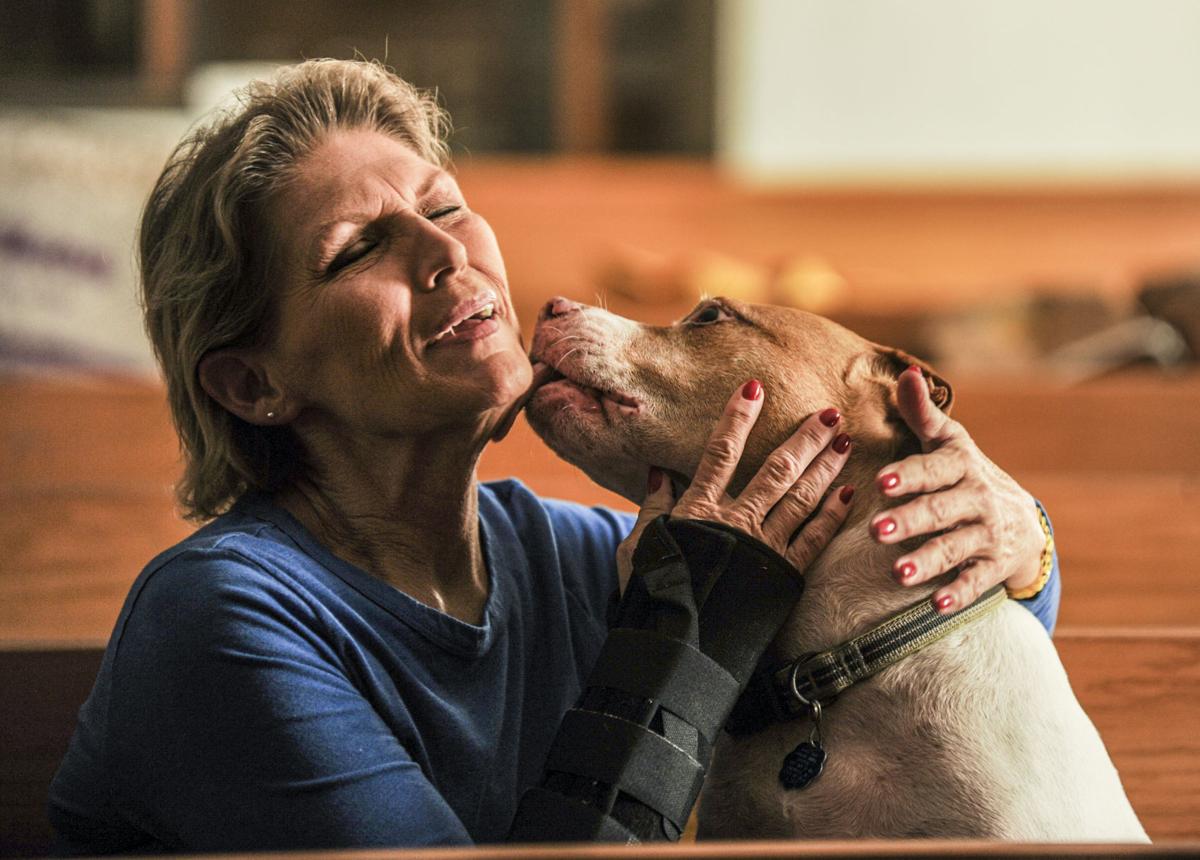 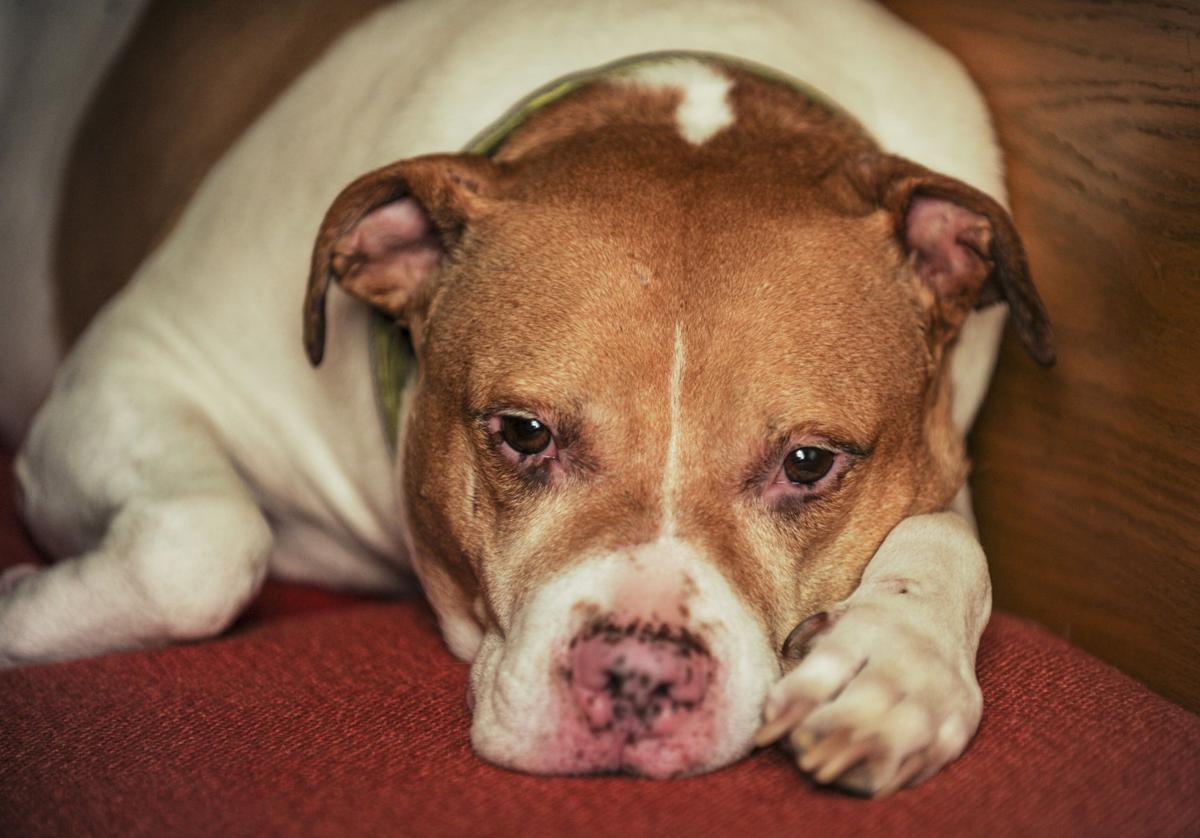 Handsome rests on one of the pews at Mount Tabor Church. He serves as mascot of the pet food pantry portion of the Feeding Families of Alabama nonprofit.

Handsome rests on one of the pews at Mount Tabor Church. He serves as mascot of the pet food pantry portion of the Feeding Families of Alabama nonprofit.

HARTSELLE — A pit bull thrown into a dumpster 6½ years ago after his muzzle and paws were tied together with barbed wire now monitors kids waiting on a school bus, gives fundraising kisses and comforts his owner.

Handsome, now 8, had apparently been used as a bait dog and left to die in the dumpster when he was rescued and placed in a shelter. That's where Edee Grun's grandson, Zye Tipton, spotted the scrawny 56-pound dog and convinced his mother to adopt him.

Grun was recovering from pancreatic cancer at the time, going through a divorce, and living with and being taken care of by her daughter, Emily Tipton, Zye's mother. Once the rescued dog joined the home, he and Grun became almost inseperable.

“They brought him into the house to meet me, and that baby climbed up in my lap in that recliner and he spent the entire night in my lap. We bonded. That was just all she wrote,” said Grun. “Handsome’s never left my side since then.”

Handsome now is up to 80 pounds and serves as mascot of the pet food pantry portion of the Feeding Families of Alabama nonprofit that Grun oversees.

“God put him there for me, and God put me there for him," Grun said. "We needed each other. He helped me get through that horrible, horrible period of my life, and that got him through the horrible things he had gone through.”

Handsome received his name the first night he stayed with Grun and his appearance was rough.

“The whole time he sat in my lap that night, I just kept telling him what a handsome baby he was. You’re going to be handsome, that’s going to be your name. And it stuck. And it’s been his name,” said Grun.

Even now, his name defines what his owner sees in him. His outward appearance still might be described as scruffy.

“He gets excited, and he gets all googly-eyed, and one ear’s lopsided, and he has all those scars,” said Grun.

Grun said the pit bull breed gets a bad rap because of some owners. “Yes, people fight them, but they also kill them. A dog is only what the owner makes it.”

Grun said Handsome still loves people despite his experience as a bait dog but is terrified of other dogs and goes into panic mode when he sees one. “He’s always afraid he’s going to be attacked.”

Handsome has made himself an unofficial school bus monitor in their neighborhood. In the mornings, he wakes up Grun because he knows the school bus schedule.

“I have to open the door, he’ll stand in the door, and he will watch every child, and every school bus. When those kids are out there on the side of the road, he’s watching. Watching to make sure they’re safe,” Grun said.

“And when the last bus goes through, he turns around and goes and gets back in bed. He’s like, my job’s done.”

Grun is the pastor of Mount Tabor Church and runs the Feeding Families of Alabama food pantry where Handsome often can be found. “He’s part of me, part of what I do,” said Grun.

Once a year, Handsome gets his own event and his kisses are sold for a dollar. The money goes toward buying pet food for the pantry. Grun said people come by, get pictures with him, get a kiss from him, and then donate a dollar to the pet pantry.

“He got to where he was kissing everybody for free, so we had to have a talk about that,” joked Grun.

It all started one pantry day when Handsome was being his loving self and going around licking people. So, Grun said, she put a sign around his neck that said Handsome kisses for a dollar. It really took off, said Grun, and now they have the kissing event annually.

Handsome is a big baby, according to Grun. She said he sleeps with a Powerpuff Girls blanket and his babies, which are stuffed animals. “He gets frantic if I have to wash his blanket.” Every night he also sleeps with a pink elephant.

After having such a horrible start to life and being left to die, Handsome has ended up tremendously loved.

“I couldn’t ask for a better dog,” said Grun. “Big breeds don’t mean that they’re not good dogs. And Handsome proves that.”