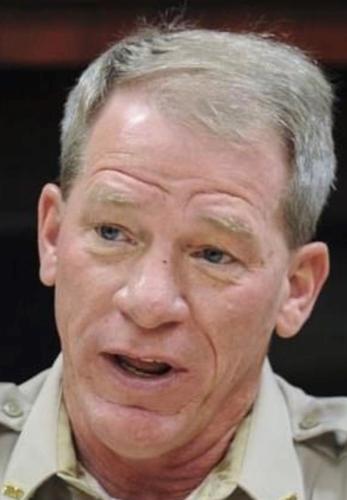 An inmate who was granted work release to The Brick deli despite facing charges of armed robbery and escape and being held on $250,000 bond was charged again with escape this month when he left work and was allegedly on the lam for five days, leading the Morgan County sheriff to revise the jail's work release policy.

Dylan Wayne Elmore, 32, is back behind bars, facing an escape charge in addition to the previous Morgan County charges of first-degree robbery and shooting into an occupied vehicle, along with six pending Madison County felony charges, including escape.

Tina Hall, a co-owner of The Brick in downtown Decatur, said she had not been informed by the Sheriff’s Office of Elmore’s criminal history in Morgan or Madison counties before hiring the inmate to work in the kitchen, but she stressed that Elmore was a good worker and that the sheriff’s work release program is beneficial.

Elmore was out on bond on various Madison County charges when, according to authorities, he on Dec. 30 approached an 18-year-old in a vehicle at the Mapco on Point Mallard Parkway.

Elmore pulled a Smith & Wesson pistol, “demanding money and fired a shot while struggling” with the victim, according to an affidavit filed in Morgan County District Court by Priceville police Sgt. Jason Wilbanks.

Police arrested Elmore on Jan. 2, according to court records, and he was booked into the Morgan County Jail in lieu of $250,000 bond.

At the time of his arrest, Elmore was facing six charges in Madison County involving incidents there in 2021. Those charges included two counts of obstruction of justice for using a false identity, and one count each of second-degree escape, possession of a controlled substance, trafficking in stolen identities and first-degree theft.

He also had a record of numerous previous theft and burglary-related charges in Madison County going from 2008 — when he was 18 — to 2016, most of which resulted in convictions and prison time.

“I know he was a good guy and had gone years without giving anybody any trouble and he had shown himself to be a very responsible person,” Hall said. “That’s the only people that they let do these jobs. That’s the only type person they let do work release.

"We trust the people that come in here, that they’ve been vetted. We trust the sheriff’s department, and I think they do an awesome job.”

Puckett said Elmore had indeed shown himself to be responsible while in the Morgan County Jail.

“He was working as a trusty inside the jail earlier this summer or spring,” Puckett said. “He was working in the kitchen, working the inside detail because apparently he had garnered some trust from some of the supervisors. He got to where he was working outside the jail on the detail of picking up trash along the roadways. He was doing that and was doing great.”

His conduct eventually led to him being authorized to leave direct jail supervision.

“In the summer he started giving a sob story to one of the supervisors that his dad was dying,” Puckett said. “He said he needed a job to be able to do some work to help pay for his dad because he was dying.

“We have (inmates) that work at The Brick deli and it’s pretty close (to the jail), and the supervisor’s heartstrings were pulled maybe more than his — I don’t want to say, but — common sense. He told him he could work at The Brick.”

On Oct. 28, according to an affidavit by Sheriff’s Office investigator Lt. Garry Landers, Elmore was assigned to work at The Brick in downtown Decatur from 9:15 a.m. until 11:15 p.m. During the evening shift, Landers said, Elmore “was seen hanging around and speaking to an individual … all evening and at some point, was reprimanded and was going to be transported back to the Morgan County Jail.”

Elmore was next seen walking back into The Brick and, at 10:38 p.m., exiting the rear door and heading east toward Sixth Avenue, according to the affidavit.

"I think he just had a little bit of a breakdown," Hall said. "I don’t think that’s anybody’s fault. I don’t think it’s the (work release) program’s fault. My heart breaks for him and I’m very sorry it happened. Everybody’s human."

A warrant was issued and, Puckett said, Elmore was re-arrested five days later in Madison.

Assistant District Attorney Courtney Schellack on Nov. 2 filed a motion to revoke Elmore’s bond, arguing the inmate had forfeited his right to bail due to the charges against him, the fact that he is facing a sentence of up to life imprisonment, and his escape.

“The defendant is additionally a threat to the public at large, due to the violent nature of his current charges, the fact that he was on bond when these charges were committed, and his history of criminal activity," she wrote.

Schellack also asked the court to “issue an order that the defendant shall not be released on work release while in custody pending the trial of these matters.”

“The supervisor is a good guy. You can say it’s Ron Puckett’s fault,” Puckett said.

The revised work release policy Puckett said was implemented last week is more stringent than the previous one.

“If someone’s got a high bond, if they’ve got a violent charge such as robbery, it doesn’t matter what kind of person they are — even if you’ve befriended them and they’ve shown they can be trusted over the summer with him working in the kitchen and work detail outside — it’s not going to matter. We’re not going to put them in work release,” Puckett said.

Another aspect of the new policy, Puckett said, is that a higher level of supervisory approval will be required before work release is granted to inmates facing serious charges.

“Depending on the person and what kind of charge they have, it could go from the warden, the chief deputy, to me and the judges. All have a say in the review process depending on the charges,” he said.

The need for this change to the existing policy is evident in Elmore’s case, Puckett said, where a supervisor became too attached to the inmate.

“Sometimes you get personally involved with these guys, especially if you’re working on a trash pickup detail and you’re with them every day, and these guys are talking to you every day, and they just garner that trust,” Puckett said. “You trust them more than they need to be trusted and you don’t realize, or you forget, their charges.”

Puckett said the supervisor who granted Elmore work release likely did not know about the pending Madison County escape charge. The revised policy will also address that flaw.

“The new policy says that we will perform a background check that includes a criminal history check. With the new procedure we will be able to see their previous criminal charges,” Puckett said, including those outside Morgan County.

The new policy also prevents an inmate from participating in work release if he or she has been sentenced for a violent felony or convicted of escape in the previous five years. Inmates who have previously served a prison sentence of more than 10 years are also blocked from the program.

Under the new policy, an inmate who applies for the program must pass a drug screen before being granted work release. Once in the program, the inmate is subject to random searches at work and in the jail, random drug screens and strip searches when they return to the jail.

Puckett said he is in the process of scheduling a meeting with the judges to get their input on the new policy, and he said it may become more restrictive depending on what they say.

Hall, meanwhile, hopes any changes don’t jeopardize the work release program, which she said has been invaluable to The Brick. And even after his escape and learning that he was charged with armed robbery, she expressed sympathy for Elmore.

“He was wonderful. His background in the jail, I think he had shown himself to be very dependable and like a reformed person," she said. "I think he was under extreme stress. He had just found out that his father had gotten put in hospice. I think in a situation like that people don’t do things that they would normally do. He’ll regret it for the rest of his life.”

Do you prefer a real or artificial Christmas tree in your home?