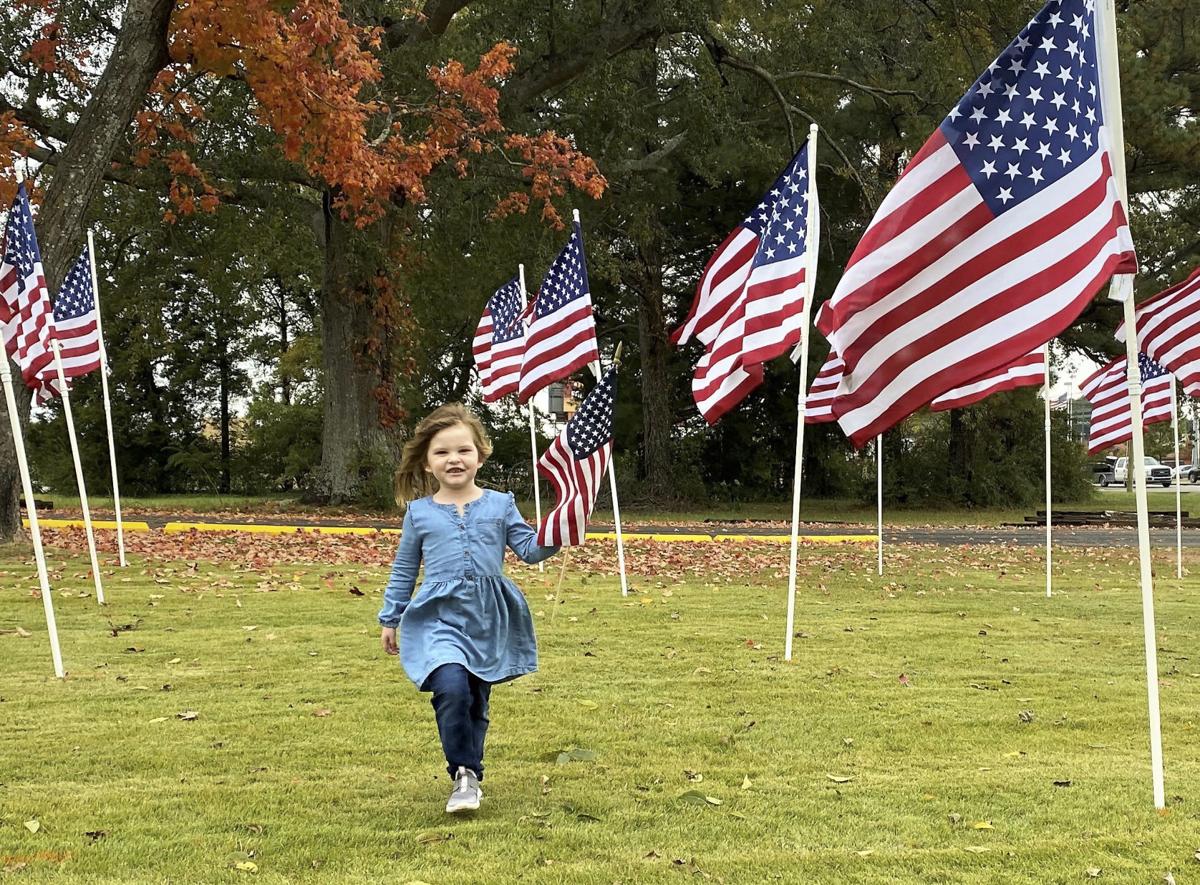 Cambridge Morris, 4, of Madison, walks through a maze of American flags at American Legion Post 15 in Decatur on Thursday morning. Her parents are Lindsey and Randal Morris. Randal is a U.S. Army veteran and a sergeant in the Army National Guard. [MICHAEL WETZEL/DECATUR DAILY] 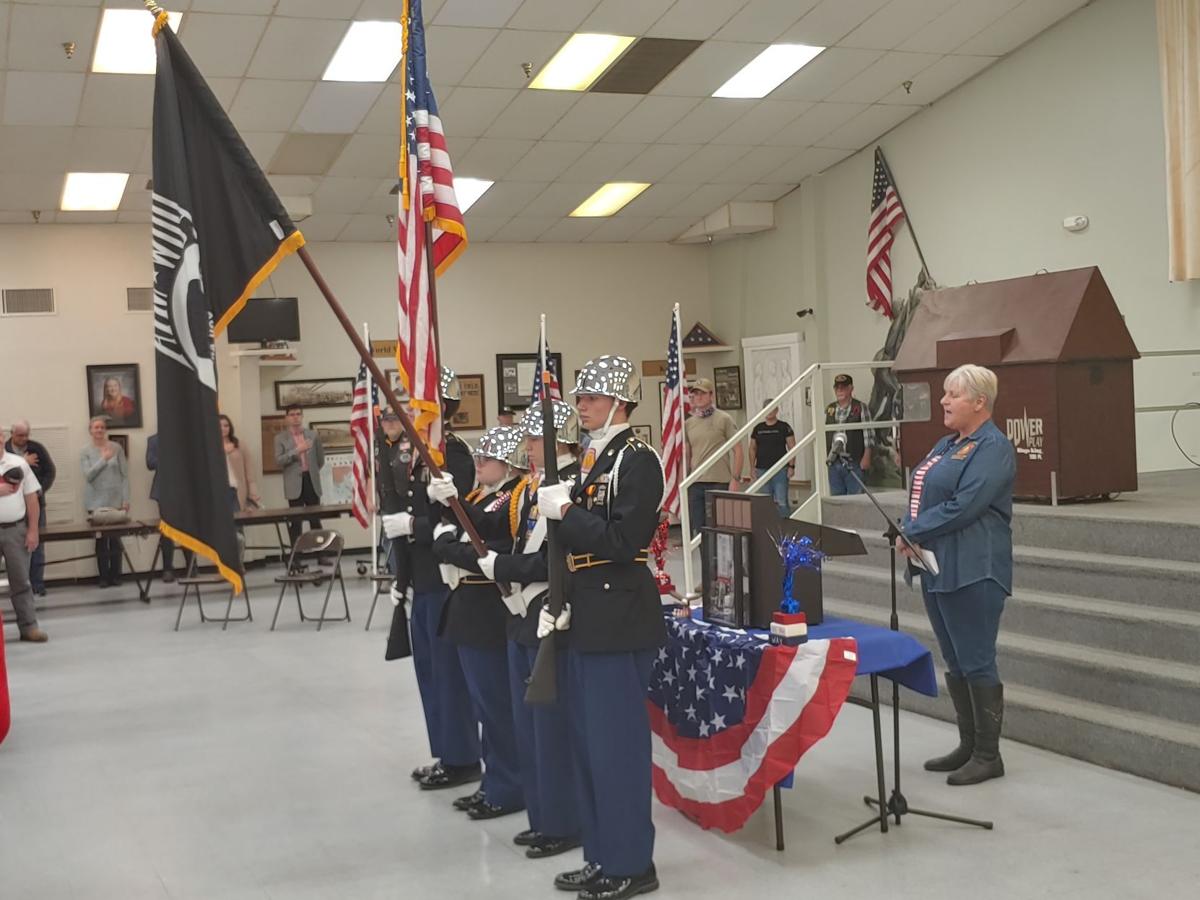 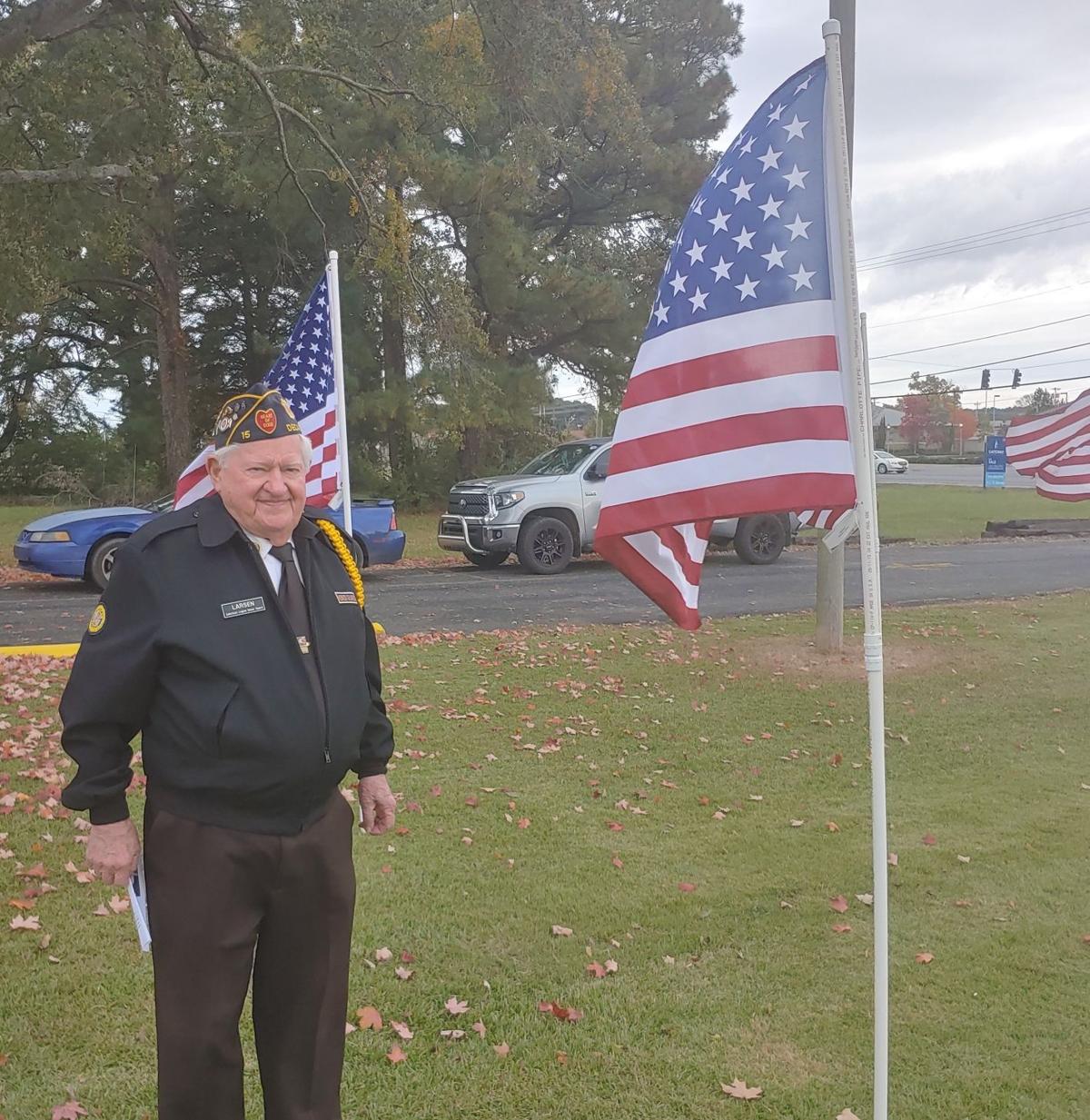 Cambridge Morris, 4, of Madison, walks through a maze of American flags at American Legion Post 15 in Decatur on Thursday morning. Her parents are Lindsey and Randal Morris. Randal is a U.S. Army veteran and a sergeant in the Army National Guard. [MICHAEL WETZEL/DECATUR DAILY]

Randal and Lindsey Morris looked on as 200 American flags waved fiercely in the wind at Decatur's American Legion Post 15 on Thursday and continued to educate their daughter Cambridge on the services that individuals like her father have undertaken to provide her current freedoms.

“At a young age they need to be taught about our armed forces,” Lindsey Morris said. “Kids need to have pride in their country and realize we have a lot of choice of freedoms because of what our military has sacrificed.”

The Morrises and other families came to Post 15 on Thursday to honor and remember veterans at a morning ceremony. The tone for the Veterans Day event was captured by John Johnson, Morgan County's Disabled American Veterans commander and Combined Patriotic Organization chaplain. He closed the ceremony with a verse from 2 Chronicles and urged the crowd to keep honoring veterans.

“Today we salute them, but we need to salute them tomorrow, and the next day, and every day after that,” Johnson said.

Military service was important to many of those attending, including Randal Morris. Before meeting Lindsey, he enlisted in the National Guard and served in Afghanistan from 2005-06.

“I was part of a personal security detachment,” Morris said. “Our job was to protect the 92nd Engineer Battalion.”

Originally from New Martinsville, West Virginia, Morris currently lives in Madison with his family. Lindsey Morris, who was raised in Decatur, said that she grew up in a military family so, naturally, the chemistry flowed when she met Randal.

“My grandfather served in World War II,” Lindsey said. “That’s always been a big deal to me because he was in Normandy.”

In addition to serving in Afghanistan, Morris was also deployed to Guantanamo Bay in Cuba in 2013 and Kenosha, Wisconsin, in 2020 to aid Kenosha police with the civil unrest that resulted from the police killing of Jacob Blake.

“We were called there to aid police, but by the time we had gotten there, they mostly had it under control,” Morris said. “Where we were stationed at in Kenosha, I didn’t really see any hostility or property damage.”

The Morris family and other veterans and their families sponsored the flags that surrounded Post 15 off U.S. 31 South.

Son of World War I veteran

James Larsen, an Army veteran and honor guard with the Post, proudly observed the flag he sponsored for himself and his father, both Army veterans.

“My father served in World War I and fought on the (Meuse-Argonne offensive) in France,” Larsen said.

The Meuse-Argonne offensive, fought from Sept. 26 to Nov. 11, 1918, was part of the final allied offensive of WWI and helped bring the war to an end. The conflict was the deadliest battle campaign in American history, resulting in over 26,000 soldiers killed in action and over 120,000 total casualties.

“My father was trapped for two weeks in Argonne,” Larsen said. “It was so terrible, he would not discuss it with anyone when he got back home, not even me.”

Larsen himself served from 1953-54 on an Army base in White Sands, New Mexico, testing missiles. Larsen likes the direction the United States has gone since the 1950s in studying missile defense.

Retired Staff Sgt. Ernest Megli was also at Post 15 on Wednesday and his career spanned over two decades in both the Air Force and Army Reserves.

“I knew I wasn’t college material,” Megli said. “This was during the Vietnam War, so my draft number came up and I went ahead and enlisted before they drafted me.”

From 1969 until 1975, Megli served on Francis E. Warren Air Force Base in Cheyenne, Wyoming, where he also developed missiles.

Megli said he learned lifelong lessons from his service in the military.

“Discipline, organization, teamwork and camaraderie are some of the most important things I learned while in the military,” Megli said.

After Megli left the military in 1992, he went on to work for the federal government and inspected aircraft. He moved to Morgan County in 2001 and worked as a quality assurance specialist for a defense contract management agency.

A Veterans Day parade in Priceville was originally scheduled to precede the ceremony at Post 15 but was canceled to avoid rainy weather. Megli said there should be more ceremonies honoring veterans in order to educate children about the military.

“Take them to events like this,” Megli said. “Kids need to understand that we don’t want to be in war, but we’re there to defend our country and people at all costs.”

Theresa Groves, the director of American Legion Post 15, said the ceremony Thursday was sponsored by the Combined Patriotic Organization.

“CPO is made up of all veteran organizations here in Morgan County,” Groves said.

Groves, whose husband Roger is an Army veteran, said the American Legion sold flag sponsorships for $10 to individuals who wanted to honor a veteran.

“Each flag has the name of the veteran that they wanted to honor,” Groves said. “These flags fly from sunrise to sunset.”