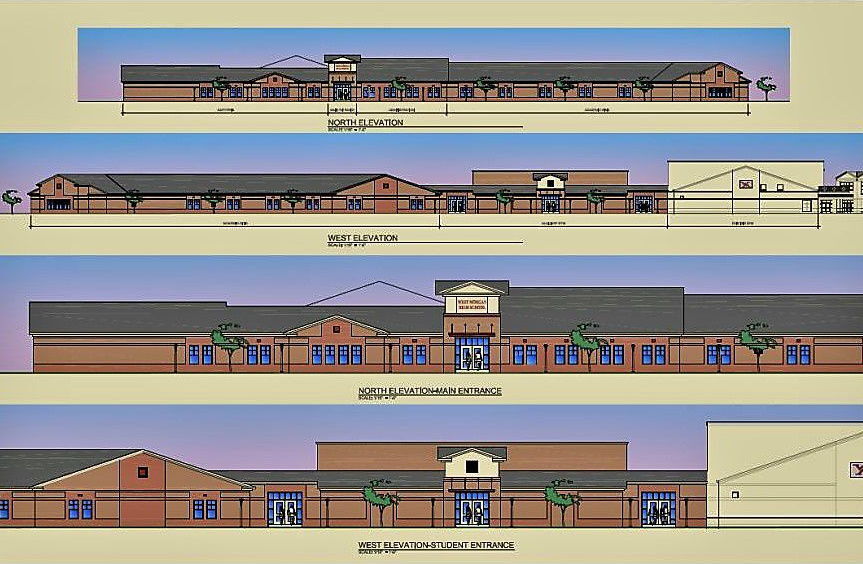 Artist renderings show exterior images of the new West Morgan High School, which is expected to be completed in November 2021. [COURTESY ILLUSTRATION] 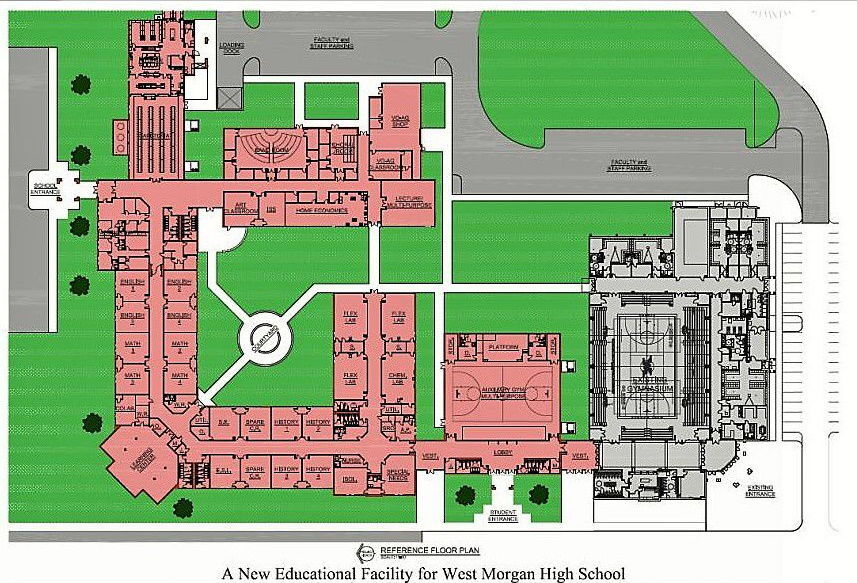 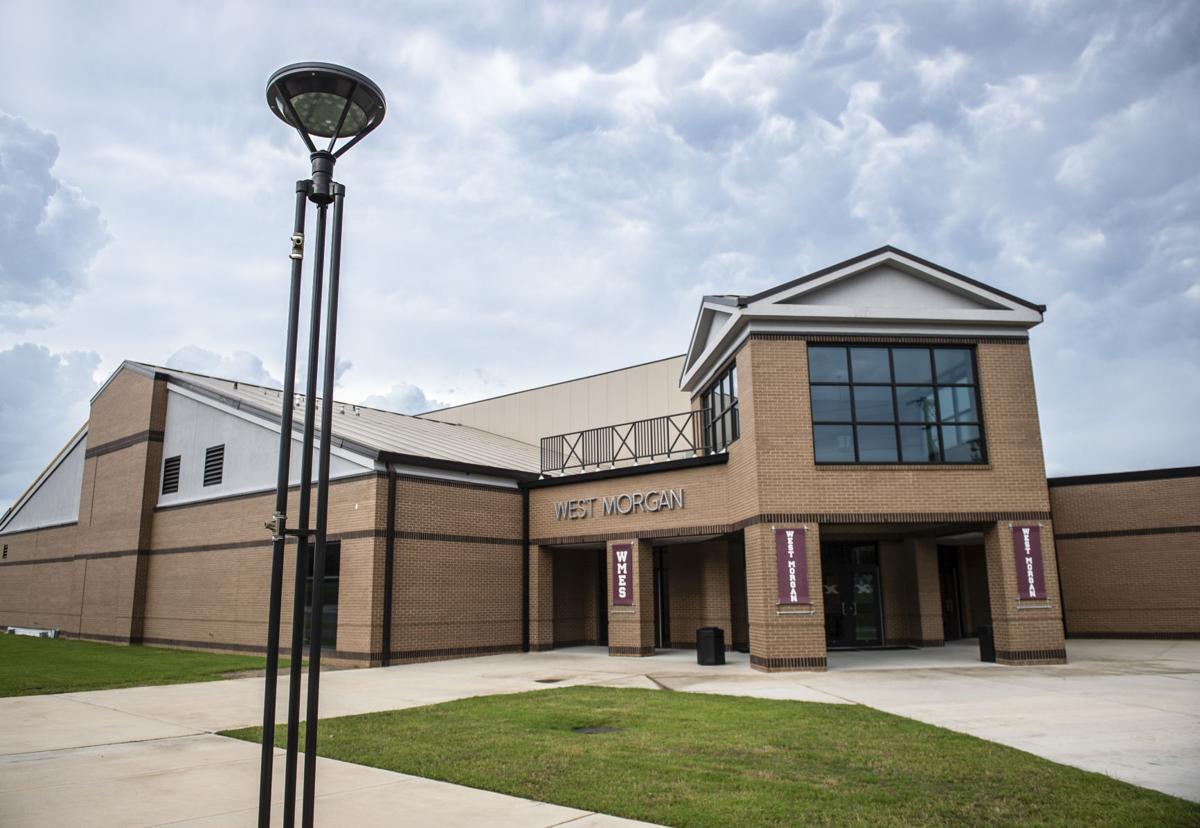 The first phase in renovating the West Morgan campus was an athletic facility for female and male students that cost $6.8 million and included a 1,202-seat gymnasium and weight room. [DAN BUSEY/DECATUR DAILY]

Artist renderings show exterior images of the new West Morgan High School, which is expected to be completed in November 2021. [COURTESY ILLUSTRATION]

The first phase in renovating the West Morgan campus was an athletic facility for female and male students that cost $6.8 million and included a 1,202-seat gymnasium and weight room. [DAN BUSEY/DECATUR DAILY]

The groundbreaking on the expansion and renovation of West Morgan High School is expected to begin this month after the Morgan County school board last week awarded the $16.6 million construction bid.

The board voted 7-0 to accept the bid from Nearen Construction Co. of Cullman. Once the notice to proceed is issued, construction is expected to be completed in 450 calendar days or about mid-November of 2021, according to one contractor on the project.

Plan highlights for the 90,000-square-foot addition call for an auxiliary gymnasium, a new vocational building, new band room for 100 students, choral room for 50 students and additional student capacity throughout, according to Bobby Dennis, project manager for Montgomery architectural firm McKee and Associates, which is overseeing the design.

The first phase was an athletic facility for female and male students that cost $6.8 million and included a 1,202-seat gymnasium and weight room shared by all the athletic programs at West Morgan. McKee and Associates designed it. The gym opened for the 2018-19 basketball season.

District 1 board member Billy Rhodes, who represents West Morgan, said about 1,400 students from four communities attend public school in Trinity. He said the high school’s capacity will increase from about 400 to 600 students with the expansion.

“It’s long overdue,” Rhodes said. “Our numbers are growing. We have about 550 kids in grades K-4, 450 in middle school and over 400 in the high school. Time is coming where you will have over 500 at the high school. We have a new athletic facility already there. We’re attaching a major expansion. It will be something this community will be very proud of.”

He said he expects families moving into the area for jobs related to the Mazda Toyota Manufacturing USA plant in Limestone County will mean more students in Trinity.

Rhodes said he taught American history and business and drove a bus for the West Morgan schools for more than 30 years.

“The old school has had water problems, sewer problems. The bathrooms are horrible,” he said of the 60-year-old buildings. “We’ve been needing something bigger for a long time. I think the faculty, students and community will be tickled to see the groundwork get started. It has taken a lot of work behind the scenes.”

On March 9, the town of Trinity annexed 36 acres next to the planned expansion zone at the request of the school board.

Morgan County Schools Chief Financial Officer Brian Bishop said the district has about $54 million of debt, but it is in good financial shape and has an AA bond rating.

John Holley, Morgan County school board chairman, said COVID-19 sidetracked the project for a few months but he feels it now will move forward with the board’s vote. Initial plans called for the school to open in August 2021.

“As with all phases of our life, COVID-19 created an obstacle with the design phase of the project,” he said.

He said the school system is receiving in-kind services from Wheeler Basin Natural Gas Co. and Trinity to help keep the costs down.

“(Wheeler Basin Natural Gas) is donating the tap fee, gas piping and meter for the project. Additionally, they will be installing 1,700 linear feet of gas piping at no cost to the school district," Holley said. "The town of Trinity will provide materials and labor necessary for the installation of fire hydrants and the completion of the water loop around the project.”

McKee and Associates designed the second gymnasium to connect with the existing gym to help accommodate tournament games and practices.

A secure courtyard will give the students a safe place to gather, and every classroom will have its own heating and cooling unit, Rhodes said.

West Morgan High Principal Keith Harris said he appreciated the board allowing the teachers to have input into the design. “And it’s good to know the band room will be considered a safe place (from storms),” he said.

Architect Walter McKee said traffic flow will be improved around the school.

“West side, in front of the school, is student traffic and to the east, moms and dads will be dropping off their children,” he said.

McKee said the academic wing of the high school is arranged by subject with math and history rooms all together. “The main focal point on the north and west are English and science rooms,” he said. “We’ve designed the cafeteria to be a fun place. There will be a small patio so students can go out and eat.”

He said West Morgan logos with the same pattern of colors will be visible throughout the building.

“It’ll be a high-quality looking school, something the community will be very proud of,” McKee said. “As far as student protection, the design concept has a secure vestibule and entrances where the students can feel safe. The design provides a storm shelter not just for the students but for the community.”

Trinity Mayor Vaughn Goodwin, a former coach with West Morgan athletics, called the new gym “top notch” and said he was delighted with the floor plans of the addition.

“(The school) is full,” he said. “It’s time. It’s a good plan, and I believe the students will really enjoy it.”

Thank you, Mr. Rhodes for your relentless pursuit of a new school facility for West Morgan! We appreciate your vision and hard work!