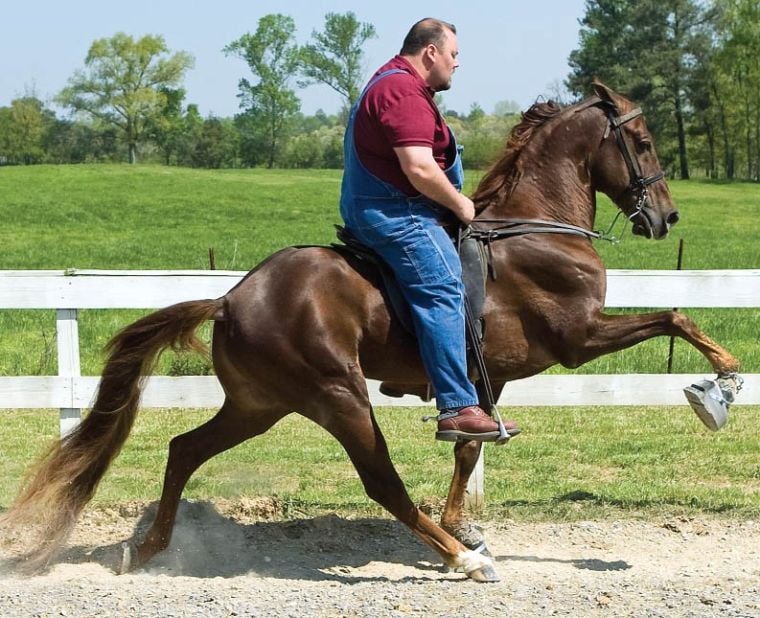 The differences in racking and walking horses can be hard to spot, but a key distinction is found in the front legs, as displayed by trainer Jamie Lawrence. The racking horse, above, curls its hooves under the ankle. 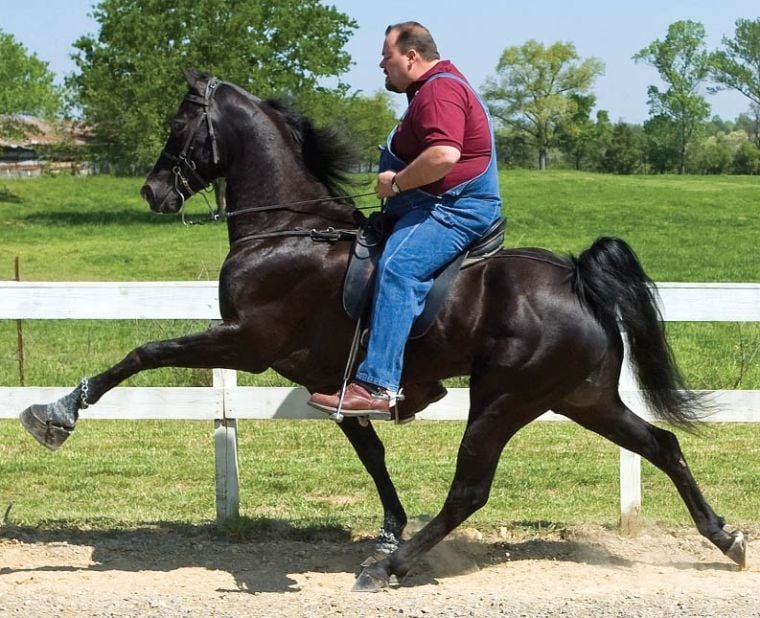 The differences in racking and walking horses can be hard to spot, but a key distinction is found in the front legs, as displayed by trainer Jamie Lawrence. The racking horse, above, curls its hooves under the ankle.

VINEMONT — Even after 15 years as a professional horse trainer, Jamie Lawrence said it’s getting harder to distinguish a racking horse from a walking horse.

“In this day and time, it’s a fine line of difference,” said the two-time trainer of the year for the Racking Horse Breeders Association of America. He will be in Priceville the next four nights competing in the Racking Horse Spring Celebration.

During the early years of the racking horse breed, purists said the breed was nothing but a walking horse reject, despite the U.S. Department of Agriculture declaring it a unique breed in the early 1970s.

There are still some who claim that today and say that the racking horse will never emerge from the shadow of its more-established cousin.

Time will tell, and while the two breeds currently are so similar they are often crossbred to create show horse champions on both sides, they still display distinctive differences when they circle the show ring.

The primary difference is in the leg and head movement, what is known in the industry as the “action.”

Both horses display a smooth gait. However, in the show ring, racking horses display three gaits, the slow walk, slow rack and fast rack. Walking horses compete with a flat walk, a running walk and, once they reach age 4, the cantor.

“Once you get them side by side, the differences become very apparent,” said Don Stisher, manager of Celebration Arena. “But you do from time to time see a horse in the racking ring that looks more like a walking horse.”

This is partly the result of crossbreeding, he said, to get more dramatic movement in the rear legs.

Walking horses naturally have more of what is called “rear-end action,” which looks as though they’re trying to sit down while they walk, giving a more dramatic appearance to the overall performance, he said.

“It’s what we call ‘getting a little deeper,’ ” Stisher said. “But (breeding for it) should never compromise the natural racking action.”

Lawrence, who trains about 60 racking and walking horses in Vinemont, said he’s as guilty as anybody for crossbreeding to achieve the more dramatic effect, but he said crossbreeding was also a necessity in recent years because the racking horse industry was low on championship-caliber stud horses.

“We just weren’t big enough to produce our own product,” he said.

That also points to another reason the two breeds remain so closely attached and why it’s likely it will remain that way for some time.

The Tennessee walking horse was officially established as a breed in 1935. With a nearly 40-year head start on the racking horse industry, it naturally has a much larger membership and pool of horses.

Stisher said basic economics of more horses, owners and trainers means more competition to drive up the cost of horses.

Because of that economic fact, most racking horses are dual registered as racking and walking horses, allowing them to compete in either industry depending on how they perform.

Judy Jones, RHBAA president, said the racking horse breed is still a work in progress and will remain tied to the walking horse industry for years to come.

She noted that the RHBAA tried in the mid-1990s to exclude dual registering, but it took only a short time to discover the racking horse industry didn’t have enough horses to help the breed grow at a healthy rate.

Besides developing numbers for breeding, it also just takes time to breed the ideal characteristics for racking horses that will one day make them more distinguishable from walking horses, she added.

Jones and Lawrence said that until the RHBAA closes its registry, both walking and racking horse industries will continue to benefit from each other.

They said nowadays it’s no longer just a situation where champion racking horses are offspring from walking horses; it’s common for colts from racking horse parentage to perform better as walkers.

What: Second-largest racking horse competition of the year, featuring more than 100 horses.

When: Wednesday through Saturday; shows start at 6:30 p.m.

Where: Celebration Arena in Priceville.