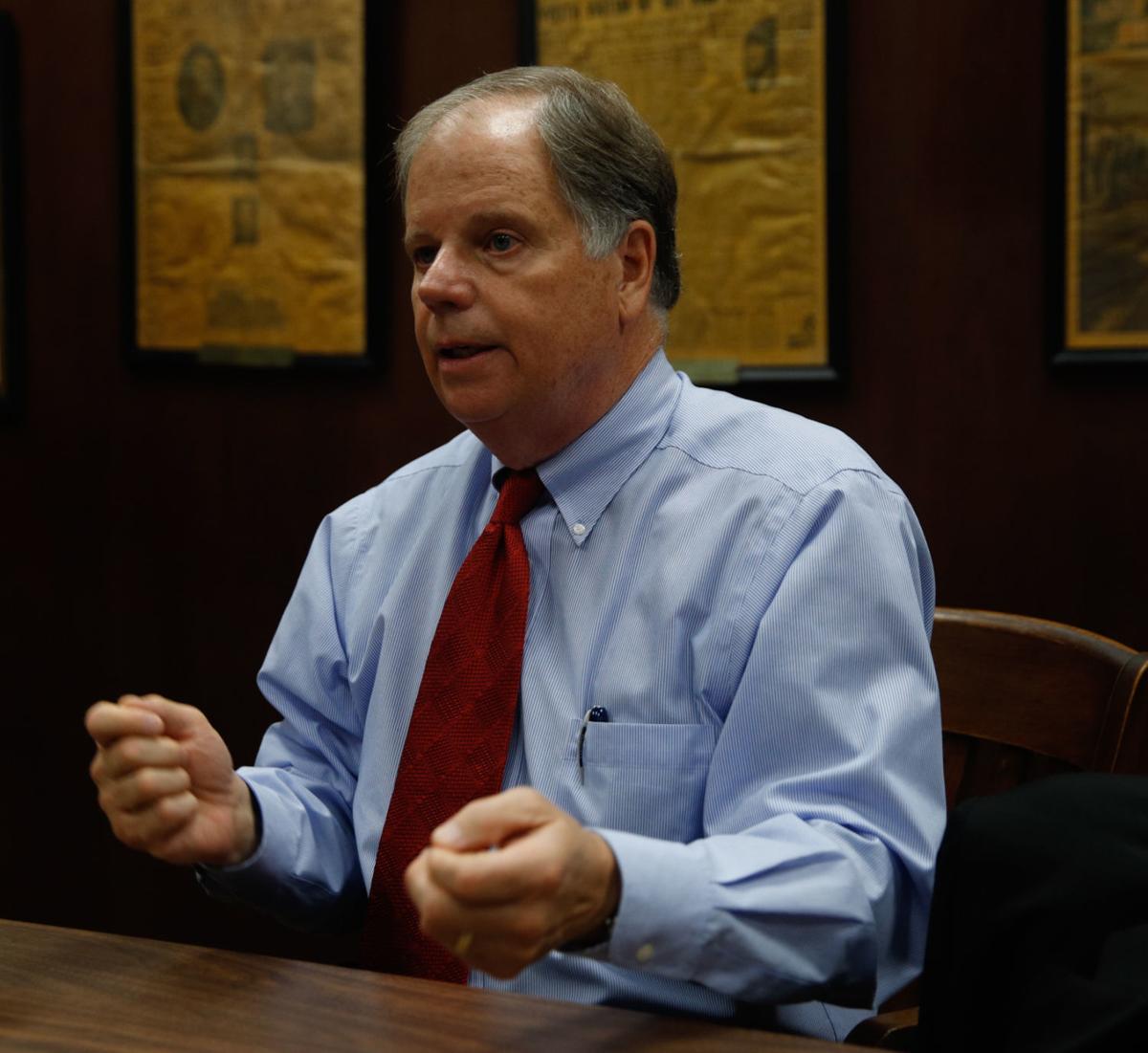 U.S. Sen. Doug Jones talks during an hour-long interview with The Decatur Daily on Tuesday. Jones said Republicans and Democrats should be able to find areas of gun laws where they can agree, such as banning 100-round capacity drum magazines. [DEANGELO MCDANIEL/THE DECATUR DAILY] 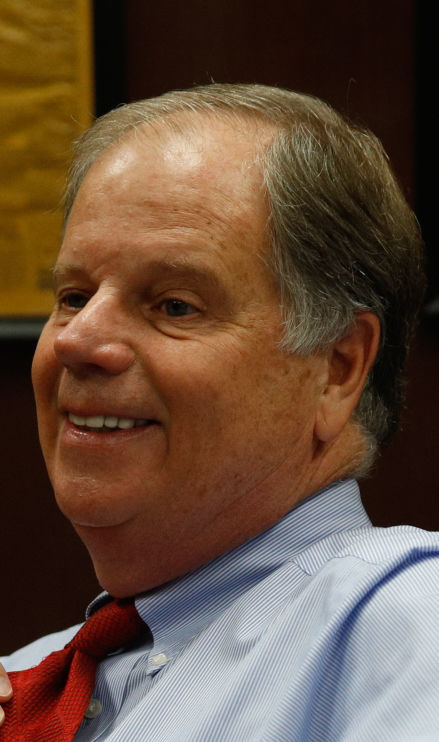 Alabama U.S. Sen. Doug Jones would like to see expanded background checks for gun purchasers and a ban on the 100-round capacity magazines used in one of the two mass shootings that killed 31 people last weekend, but his expectations are low.

"Nothing," he said, when asked what steps he expects Congress to take. “Because nothing has ever happened. I think we’re going to hear a lot of talk."

Jones, who during a 2017 special election became the first Democrat in Alabama to win a U.S. Senate seat in more than 20 years, in an hour-long interview with The Decatur Daily on Tuesday discussed the mass shootings in El Paso, Texas, and Dayton, Ohio, and the political rhetoric he believes makes such shootings more likely.

He said gun legislation should be a continuous discussion, but constructive dialogue becomes difficult after mass shootings.

"The minute we have a shooting like this, people go to their corners. People that want more restrictions (on guns) start raising their flags and people that don’t, circle their wagons," Jones said. "What I see is guns, like immigration, like so many other things, have gotten to be such hot-button political issues. People pillory each other, and they refuse to recognize that there are some things we ought to be able to agree on."

Jones, 65, said he generally opposes gun control, except for limitations on magazine size, and even then, his only opposition is to drum-style magazines like the one used in Dayton.

Included in that gun safe, he said, are semiautomatics.

"I’ve got pistols, I’ve got long guns, I’ve got shotguns," Jones said. "I hunt as much as I can. We’ve got some old military guns we collected that are fun to just go out and shoot."

Jones said many in Congress do not understand an Alabama culture that appreciates guns.

"I don’t think people sometimes appreciate that just going out and shooting is part of a culture. You can’t completely try to take away people’s culture," he said. "But those people with this culture have to also understand that they need to respect some other folks, because that culture can go too far."

Both Democrats and Republicans, he said, need to dial back the political rhetoric that creates a "culture of contempt" that prevents solutions and may encourage mass shooters.

"I think that culture of contempt manifested itself this weekend in the most dangerous of ways," Jones said. "How do we maintain our political differences without demonizing each other to the point we trigger something like what happened this weekend? It’s pretty frightening. ...

"We just see people yelling at each other."

"I think the president is the offender-in-chief with what he’s been doing, but he’s not the only one," Jones said, also criticizing Democrats in Congress for calling the president a racist and for applauding those who harass GOP leaders and their families.

Jones said Trump could have an enormous role in calming tensions in the nation, but a speech the president gave Monday calling for an end to racism was not enough.

"He can read from a teleprompter — and not do it very well by the way — but he ain’t going to have that teleprompter the next time he goes to a big rally and there are 15,000 people saying, ‘Send her back,’ and he's talking about the 'rat-infested' cities ... and when he attacks political opponents on a personal level the way that he does," Jones said. "I don’t know that he has the will. I don’t know that he has the discipline. I hope I’m wrong on that.”

Former Alabama Chief Justice Roy Moore, who lost to Jones in the 2017 election, said on Twitter that the mass shootings were evidence “of a moral problem in our Country, not a lack of gun control.”

Alabama Secretary of State John Merrill, also a candidate for the Senate seat, told Alabama Daily News: “First of all, we need to implement the laws that we have already on the books, and I think it’s pretty clear that that is not taking place. ... I am reluctant to place any further restrictions on the availability of or the purchase of firearms for our citizens because I believe we have to protect the Second Amendment.”

Congressman Bradley Byrne said that the shootings were proof of a conflict “between good and evil.”

Jones said he has reached out to Republican colleagues since last weekend's shootings, but he's not optimistic.

"Most everybody I’ve talked to, they don’t want to do any gun legislation. They want to talk about all this stuff just in terms of mental health. Which is a problem, but it’s not the only problem," Jones said.

Banning 100-round capacity drum magazines is something Jones said Democrats and Republicans should be able to agree on.

He said he probably would not support legislation banning 30-round magazines.

“I’m not sure what the sweet spot is,” Jones said of magazine capacity.

Trump on Monday called for “strong background checks” for gun buyers, which is something Jones said he supports.

Jones said he would also close the "boyfriend loophole," which allows boyfriends and girlfriends convicted of domestic violence to purchase firearms, even though husbands and wives convicted of the same crime cannot.

He also wants stronger early warning laws, something many states have enacted.

These laws, also known as red flag laws, allow police and family members to petition courts for the temporary removal of firearms from those who present a danger to themselves or others.

While he suspects there's broad bipartisan agreement on his proposals, he does not expect legislation.

"People will talk about it and they’ll tweet about it and put it on Instagram, and when we come back (from recess) there will be speeches about it. And you’ll hear 20 politicians on the Democratic side railing about it," Jones said. "There might be some things done, but I’m not optimistic."

— deangelo@decaturdaily.com or 256-340-2469. Twitter @DD_Deangelo. The Associated Press and Alabama Daily News contributed to this reporting.