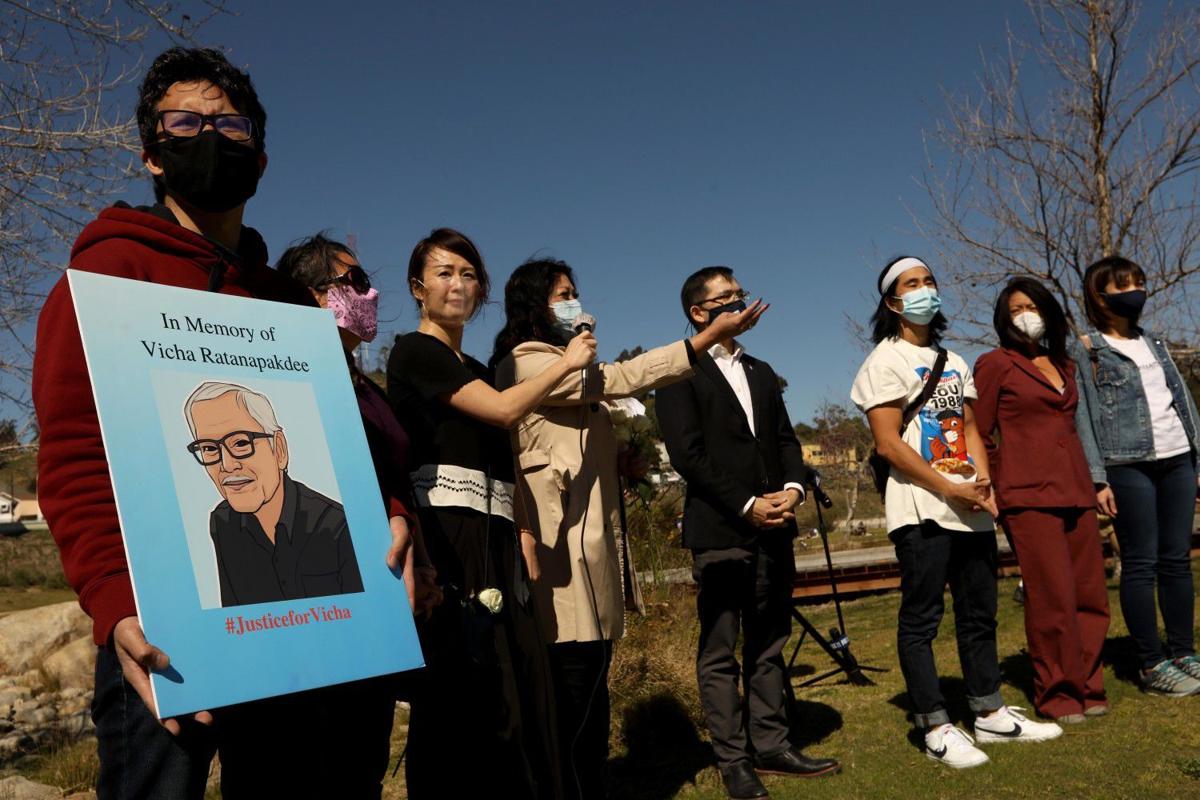 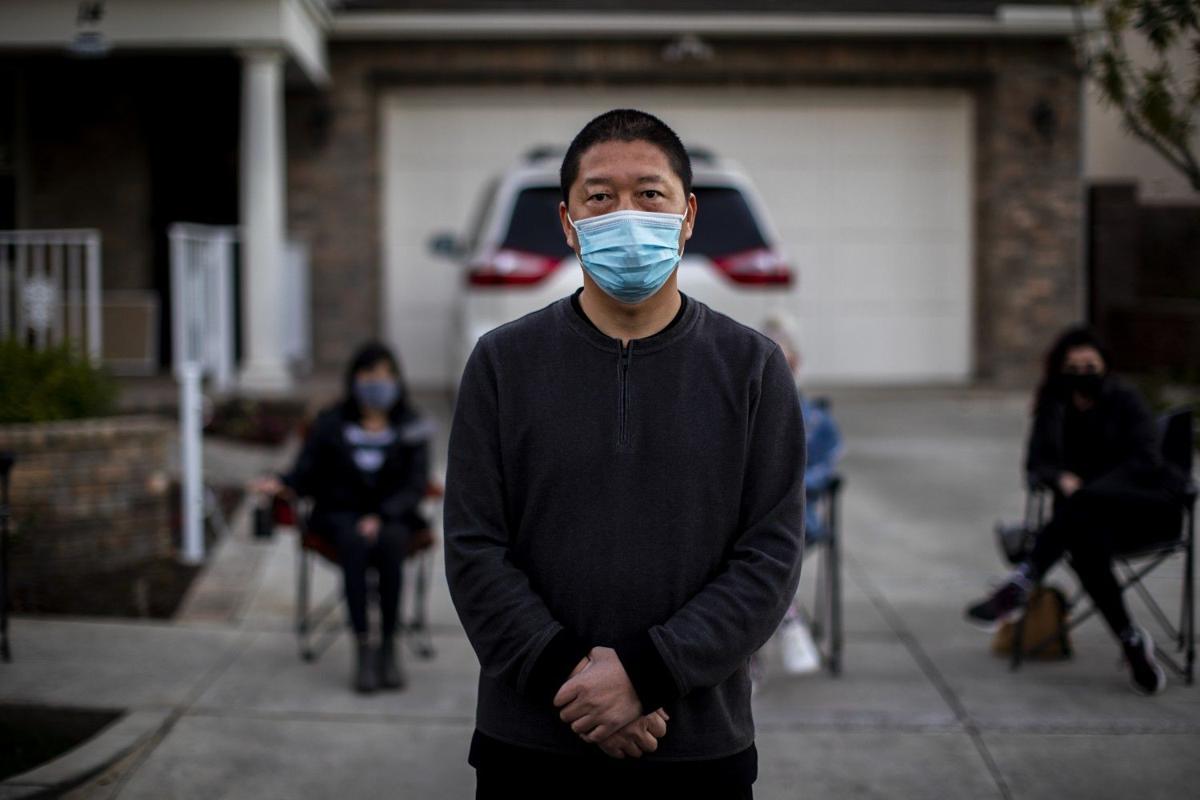 Haijun Si stands in front of his Ladera Ranch family home Feb. 25 as neighbors gather in front to form a nightly security detail after local teens have harassed the family by throwing rocks and yelling racial slurs on, in Mission Viejo, California. [GINA FERAZZI/LOS ANGELES TIMES/TNS]

Haijun Si stands in front of his Ladera Ranch family home Feb. 25 as neighbors gather in front to form a nightly security detail after local teens have harassed the family by throwing rocks and yelling racial slurs on, in Mission Viejo, California. [GINA FERAZZI/LOS ANGELES TIMES/TNS]

Kiwi Wongpeng was stopped at a traffic light in suburban Cleveland when a man pulled up beside her and motioned for her to roll down the window.

“Get out of my country — that’s an order!” he shouted from his pickup. After a pause, he added: “I’ll kill you.”

It wasn’t her first brush with racism. But she had never heard something so direct and violent until last April, as cities around the country were shutting down amid the COVID-19 pandemic.

The man, she believed, must have mistaken her for Chinese and blamed her for the virus that originated in Wuhan, China.

“I’ve felt scared for not just myself, but my community and Asians all over this country,” said Wongpeng, 34, whose family immigrated to the U.S. from Thailand 20 years ago and runs a Thai restaurant.

Her sense of hate on the rise is borne out by data. In a survey of police departments in 16 major U.S. cities, the Center for the Study of Hate and Extremism, a research office at Cal State San Bernardino, found a total of 122 anti-Asian hate crimes last year — a 149% increase from the 49 in 2019.

The totals climbed in 15 of the 16 cities, with New York, Los Angeles, Boston, Seattle and San Jose experiencing the most significant increases and their highest tallies in at least five years.

Chinese and Korean restaurants vandalized with anti-Asian epithets and stereotypes — “stop eating dogs,” said the graffiti on a New York noodle shop. Elderly Asian Americans were shoved on the street in broad daylight. And a Burmese refugee and his children were attacked by a man with a knife.

The rise in anti-Asian crimes occurred as total hate crimes against all minority groups dropped 7% — from 1,845 to 1,717.

Brian Levin, director of the Cal State center, described the growth in hatred as one of “historic significance for our nation and the Asian American community.”

“Opinion polls, derisive online activity, harassment and crime data have converged to show a vast spread and increase in aggressive behavior toward Asian Americans,” he said.

The rise is almost certainly related to the pandemic, which originated in China and fueled broader concerns about what threat the country’s growing economic and political power poses to the United States.

Former President Donald Trump took to calling it the “Wuhan virus” and berated critics who worried that he was stirring anti-Asian sentiment as “politically correct.” A recent Pew survey found negative views of China in the U.S. to hit a nearly 20-year high.

In New York, where the number of anti-Asian hate crimes jumped from three to 28, all but four were related to the coronavirus.

Many of the 2020 incidents in New York — and across the country — occurred in the early days of the pandemic, when fears ran highest.

That February, an Asian American woman wearing a face mask in a Manhattan subway station was kicked and punched by a man who called her “diseased.”

In March, an Asian American man walking with his 10-year-old son was followed and hit over the head by a stranger who assailed him for not wearing a mask.

In April, an Asian American woman in the Bronx was attacked on a bus by a woman and three teenage girls who hit her with an umbrella and accused her of starting the pandemic.

“There’s no question about it: All Asians feel extra vulnerable because the attacks have definitely increased,” said Don Lee, a community activist in Brooklyn. “The harassment, the pushing, the shoving.”

The most comprehensive national data on hate crimes come from the FBI, which defines them as offenses “against a person or property motivated in whole or in part by an offender’s bias against a race, religion, disability, sexual orientation, ethnicity, gender or gender identity.”

The FBI, which relies on voluntary submissions from law enforcement agencies, is not expected to publish figures for 2020 until November. But all indications suggest it will prove to be a record year for hate crimes targeting Asians.

While most of what is known so far comes from major police departments that have released their own data, Levin said that some of the worst anti-Asian hate crimes occurred in smaller cities — including the attack on the Burmese refugee and his two sons.

Last March, 34-year-old Bawi Cung was grocery shopping at a Sam’s Club in Midland, Texas, when a man grabbed a knife from a nearby rack.

A Sam’s Club employee intervened, tackling the suspect, 19-year-old Jose Gomez, who was indicted on hate crime and attempted murder charges and is awaiting trial.

“Gomez admitted, he confessed to trying to kill the family,” said Midland Dist. Atty. Laura Nodolf. “He thought that they brought the virus here and were trying to spread it” and that “all Asians must be from China.”

“Most people think hate crime, white sheets, white hats, going after someone who is of African descent,” she said. “This is a whole new dynamic.”

The police department data do not include harassment, which has been vastly more common but is not considered criminal.

Stop AAPI Hate, a tracker supported by Asian American advocacy groups, logged 1,990 anti-Asian harassment incidents and 246 assault cases in the 10 months after it launch in March 2020.

Manjusha Kulkarni, co-founder of the tracker and the executive director of the Asian Pacific Policy and Planning Council, said Trump’s rhetoric around the coronavirus was partly to blame.

“In a recent analysis, we found that a quarter of the incidents we tracked included a perpetrator using language similar to Trump’s,” she said. “Things like ‘Wuhan virus,’ ‘China virus,’ ‘kung-flu’ and ‘go back to your country.’”

“That and victim statements tell us that people are likely targeting people who they believe are from China. COVID-19 did not start in Korea,” Kulkarni said. “But racists aren’t always accurate.”

Mari Cobb, a 26-year-old immunology and genomics research lab technician at the University of Chicago, said she has watched in dismay as hatred even hit her. Her mother is Japanese American, and her father is white, which she said is how people usually see her.

This January at a Taco Bell, she was refilling her cup at the soda dispenser when a man approached her.

“The Oriental touched the dispenser!” he yelled. “Stop her! She started this whole thing!”

The reference to COVID-19 was clear.

Cobb later shared her story on Instagram, and eventually it was featured on standagainsthatred.org, a testimonials site launched recently by the advocacy group Asian Americans Advancing Justice.

“Growing up, my mom told me this could happen,” Cobb said. “But I think my white privilege has prevented me from experiencing a lot.”

Should colleges require students to receive COVID vaccinations before returning to class in the fall?