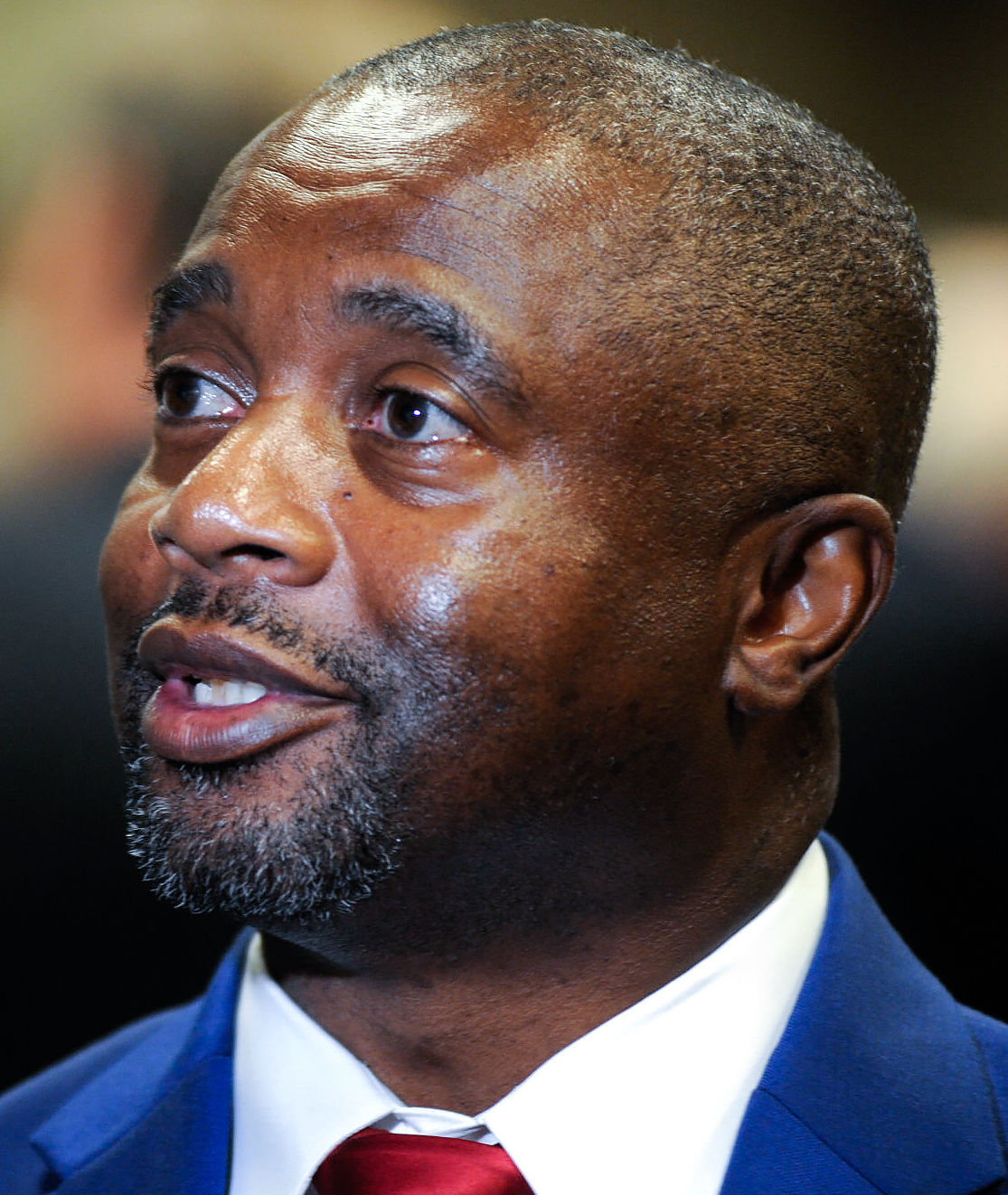 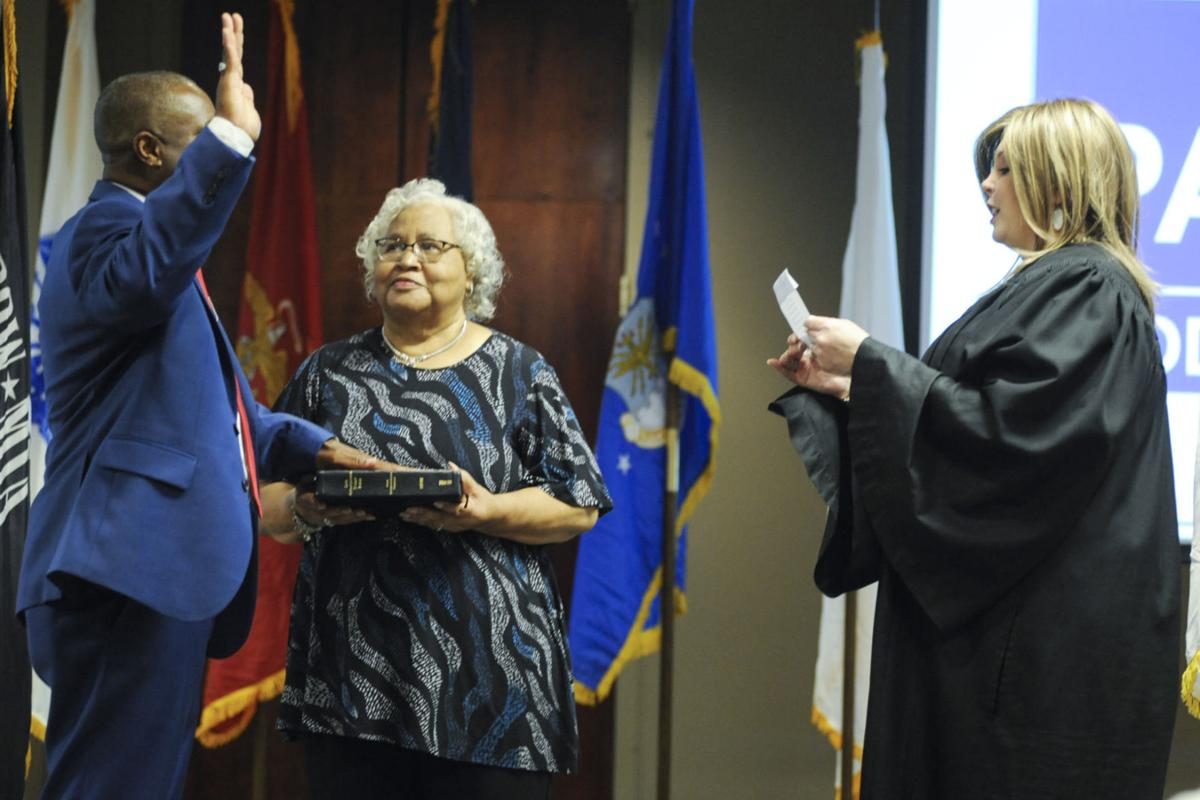 Betty Paschal looks on Wednesday in Pelham as her son, retired Army Sgt. Kenneth Paschal, is sworn in by Judge Lara Alvis as the first Black Republican elected to the Alabama Legislature since Reconstruction. [JAY REEVES/THE ASSOCIATED PRESS]

Betty Paschal looks on Wednesday in Pelham as her son, retired Army Sgt. Kenneth Paschal, is sworn in by Judge Lara Alvis as the first Black Republican elected to the Alabama Legislature since Reconstruction. [JAY REEVES/THE ASSOCIATED PRESS]

PELHAM — The first Black Republican elected to the Alabama Legislature since Reconstruction said Wednesday that his election to represent a heavily white suburban district shows that the GOP "is open to everyone."

Retired Army Sgt. Kenneth Paschal was elected Tuesday to fill a legislative seat in suburban Shelby County, becoming the only Black Republican in the Alabama Legislature. Paschal invoked Martin Luther King Jr.'s words about people being judged by the content of their character rather than the color of their skin, as he participated in a ceremonial swearing-in ceremony to celebrate his win.

"I truly believe that the Lord has called me to serve," Paschal said Tuesday, adding that "God and country" are his two guiding principles.

Standing by a bank of U.S. flags, Paschal was sworn in with his hand upon a Bible held by his mom. A mostly white crowd of about 150 cheered and gave a standing ovation when he was introduced as the first Black Republican elected to the House since Reconstruction.

Mother Betty Paschal of rural Eclectic in central Alabama said she never thought she'd see the day her son was elected to the Legislature.

Paschal, 54, won the special general election to fill House District 73. The Shelby County district stretches through the suburbs south of Birmingham. He won the GOP nomination for the seat earlier this year by just a few dozen votes, but easily defeated the Democratic nominee in the heavily Republican district.

The special election had only a few thousand votes cast, a fraction of the number that would be cast in a regular election year.

Former Rep. Johnny Ford, the longtime mayor of Tuskegee, in 2003 announced he was switching to the GOP, becoming the first Black Republican in the Alabama Statehouse since Reconstruction. Ford resigned to return to his old office of mayor and later rejoined the Democratic Party.

Paschal served nearly 21 years in the U.S. Army. He now lives in Shelby County and is a member of the First Baptist Church of Pelham. He has worked with the Alabama Family Rights Association, a group that has urged changes to child custody laws in an effort to ensure time and decision-making would be split more evenly among parents, provided both parents are fit.

The political parties in the Alabama Legislature are almost entirely divided along racial lines. Paschal will be the only Black Republican. The Alabama Senate and House each have one white Democratic member.

The GOP-controlled Legislature in 2017 had to redraw legislative maps under court order to fix racial gerrymandering in 12 districts. The ruling came after Black lawmakers filed a lawsuit challenging the maps as "stacking and packing" Black voters into designated districts to make neighboring districts whiter and more likely to elect conservative Republicans.

Paschal told The Associated Press on Tuesday that after leaving the military, he thought about where he fit politically and said that is with the Republican Party because he is conservative.

On the campaign trail, he said some people wrongly presumed he was a Democrat.

"We have put people in the box based on your skin color. ... Hopefully, we can change that," he said.

Until everyone, including the media, stops using BLACK and WHITE to describe, label or identify people, there will always be an underlying sentiment of racism. I see no reason to say he is a "black" man or he is a "white" man. Why can't people simply describe someone as a man? If you need the extra adjective to make you feel better how about he is a "good" man?