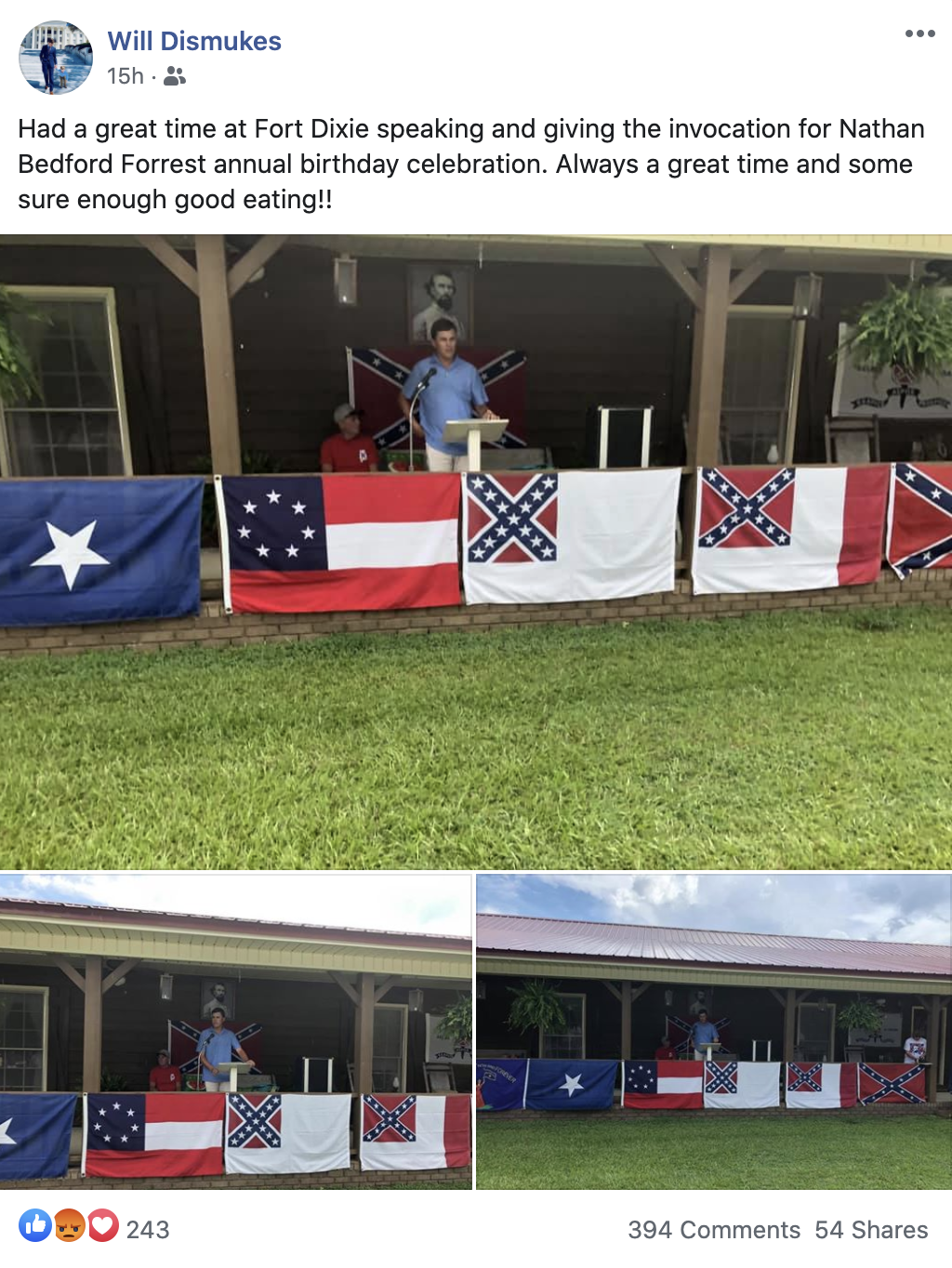 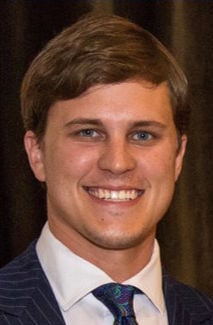 State Rep. Will Dismukes, R-Prattville, is under criticism from both sides of the aisle for a Facebook post celebrating the life of a Confederate general and Ku Klux Klan leader.

On Sunday, Dismukes posted a picture to Facebook and said, “had a great time at Fort Dixie speaking and giving the invocation for Nathan Bedford Forrest annual birthday celebration.”

The post has since been set to private and can only be viewed by friends of Dismukes, but screenshots were widespread on social media Sunday evening.

Forrest, a Tennessee native, was a Confederate general in the Civil War and the first Grand Wizard of the Ku Klux Klan.

Dismukes’ post said the event took place at Fort Dixie, which according to media reports is on private property near Selma.

Forrest was born July 13, 1821, making his birthday two weeks before the celebration.

The same day as the Fort Dixie event, the body of civil rights icon and Alabama native John Lewis was carried over the Edmund Pettus Bridge in Selma a final time as part of multiple events in Alabama honoring his life.

On Twitter on Sunday, Alabama Democrats pounced on Dismukes' post, pointing out that both events were in Selma, “but there really aren’t two sides" to the situation.

"This weekend while most people were celebrating the life of John Lewis, a true American Hero, Will Dismukes was in the same city celebrating Nathan Forrest, the first Grand Wizard of the KKK," wrote Rep. Chris England, D-Tuscaloosa, who chairs the Alabama Democratic Party. "This should clear up any questions about whose side Will Dismukes is on."

Later Sunday, Lewis' body lay in state at the Alabama Capitol as Democrat and Republican leaders attended to pay their respects.

“I cannot fathom why anyone in 2020 celebrates the birthday of the 1st KKK Grand Wizard,” Rep. Danny Garrett, R-Trussville, said on Twitter Sunday night. He's the third-ranking member of the House GOP leadership team.

“And while the body of a civil rights icon beaten by the Klan lies at state Capitol being honored by GOP/Dem leaders from all over the state. This mentality does not rep my party or my faith,” Garrett wrote.

Another House GOP leader, Speaker Mac McCutcheon issued a statement Monday stressing that Dismukes' views were not in step with the 75-member House Republican Caucus.

“The Alabama House cannot police the beliefs, statements, and activities of its members outside the Legislature as that is a job best assigned to voters in each House district across the state," McCutcheon said.

"It is important to note, however, that I and many other members of the House devoted our weekend toward honoring an Alabama native and civil rights icon who dedicated his life to securing freedom, liberty, and equality for all Americans.”

By midday Monday, Dismukes addressed the criticisms with another post on his Facebook account, saying he had no intention of glorifying the Ku Klux Klan or disrespecting Lewis. The Prattville lawmaker referred to the Klan's "atrocities and actions they committed are a disgrace to our country."

He also said he made the Sunday comments independent from other state lawmakers.

"My regret is that I have allowed them to be put in a negative light," Dismukes wrote. "If you disagree with me and my beliefs, do not hold them under the same umbrella. I can live with a dislike for me, but not fellow members, or members of my own personal family."

"While Rep. Dismukes has released a statement attempting to clarify his actions as a private citizen attending a celebration of the first Grand Wizard of the Klu Klux Klan, Alabamians hold their elected officials to a high standard of actions," Lathan said in a written statement. "So does the Republican Party.

"Rep. Dismukes offered no explanation for why he participated in a birthday celebration of Nathan Bedford Forrest. Additionally, I find his statement to be shallow in understanding why his activities are deeply offensive to so many Alabamians. His constituents will be the final decision makers of his political future.

"... It is one thing to honor one’s Southern heritage, however, it is completely another issue to specifically commemorate the leader of an organization with an indisputable history of unconscionable actions and atrocities toward African-Americans. I strongly urge his constituents to contact Rep. Dismukes to articulate and share with him their thoughts on his personal actions."

Dismukes was elected to the House in 2018. His district includes portions of Autauga and Elmore counties. He is a Baptist pastor, chaplain of a chapter of the Sons of Confederate Veterans and owns a commercial flooring company.

Which level of government has done the best job handling the coronavirus pandemic?