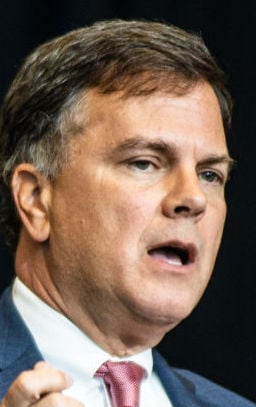 That’s how much federal COVID-19 relief money has gone to Alabama residents, businesses and government agencies since the pandemic began.

About $30.3 billion of that has been given directly to individuals and businesses to assist them, Kirk Fulford, deputy director of the Legislative Services Agency, told state lawmakers recently. About $6.3 billion was in the Paycheck Protection Program, forgivable loans to help businesses weather the economic drought caused by COVID-related shutdowns.

And nearly twice that much, $12.6 billion, has gone directly to individuals in stimulus checks.

The money had a big impact on the state’s record tax receipts for fiscal 2021, which ended last week, Fulford said. That’s especially true in the Education Trust Fund, where sales and income tax are the main contributors.

“We are absolutely going to have to study and account for the overall impact of the federal assistance on ETF revenues because it clearly played a role in the large amount of growth,” Fulford said.

“Our job is to spend the funds that we have wisely. It will pay long-term dividends for our state,” Orr said.

Priorities for some of the additional revenue, Orr said, include contributing to the ETF Stabilization Fund, teacher pay raises, a bonus for retired educators and possible tax cuts for certain Alabamians.

In the General Fund, 2021 receipts were $2.56 billion, a $262.4 million or 11.41% increase. Some of that growth can be attributed to one-time issues, including reallocation of insurance premium tax revenues last year. It was worth about $30.9 million, Fulford said.

Meanwhile, some revenue dips in 2020 were back up in 2021. Lodging taxes were up by $13.1 million, or 26.25%, driven by consumer demand this year, Fulford said. Court fees and mortgage and deed taxes were also up after a COVID-impacted 2020.

Fulford said it’s still to be determined how much the federal assistance has a continued impact in the first months of fiscal 2022, which began Oct. 1.

"But everyone is going to have to consider the very real possibility of a fiscal cliff in the near future when the federal funds run out,” he said.

Orr said that money directed to Alabamians, from stimulus checks to child tax credits, boosted state sales tax revenues as it was spent. Meanwhile, with an unemployment rate now less than 4%, the state is seeing healthy income tax receipts.

“But we must be careful because a good number of jobs and sales are a direct result of the federal largesse,” Orr said.

The state needs to be prepared for a soft landing when the federal money dries up, he said.

“Because it will dry up one day,” Orr said.

‘A mountain of money’

Separate from the non-grant money that went directly to people and businesses, there has been about $16.8 billion in federal money provided to state and local government agencies and education institutions.

Lawmakers and Gov. Kay Ivey still need to allocate about $1.8 billion of the state’s share of this year’s American Rescue Plan Act money.

“There is still a mountain of money,” Fulford told lawmakers about the amount still to be allocated.

Much like last year’s Coronavirus Relief Fund, it has to go through the Legislature and Gov. Kay Ivey. Fulford told the Senate General Fund committee last week that potential uses for the money include hazard pay for select workers, shoring up the state’s unemployment compensation fund, broadband and water and sewer projects, hospitals and nursing homes and rental assistance or other money for targeted populations.

“The only real timeline is funds have to be obligated by the end of 2024 and spent by 2026, so we have time to make good decisions in a fluid and changing environment,” State Finance Director Bill Poole said.

Senate General Fund Committee Chairman Sen. Greg Albritton, R-Range, this week told ADN that the appropriation of the American Rescue Plan funds will likely happen in several supplemental bills separate from the budgets that move through the 2022 legislative session.

“I don’t think there’s going to be one supplemental for $1.8 billion,” he said.

Meanwhile, this allocation of money will include “more specific control over this money than we did previously,” Albritton said, referring to the spring 2020 allocation of state CARES Act money. He said lawmakers signed off on general usages or “buckets” for the money but specifics were left up to Ivey’s office and the Finance Department.

“(The Legislature) is going to be more specific in its appropriations,” he said. There are also likely to be more reporting requirements on how agencies and organizations spend the money.