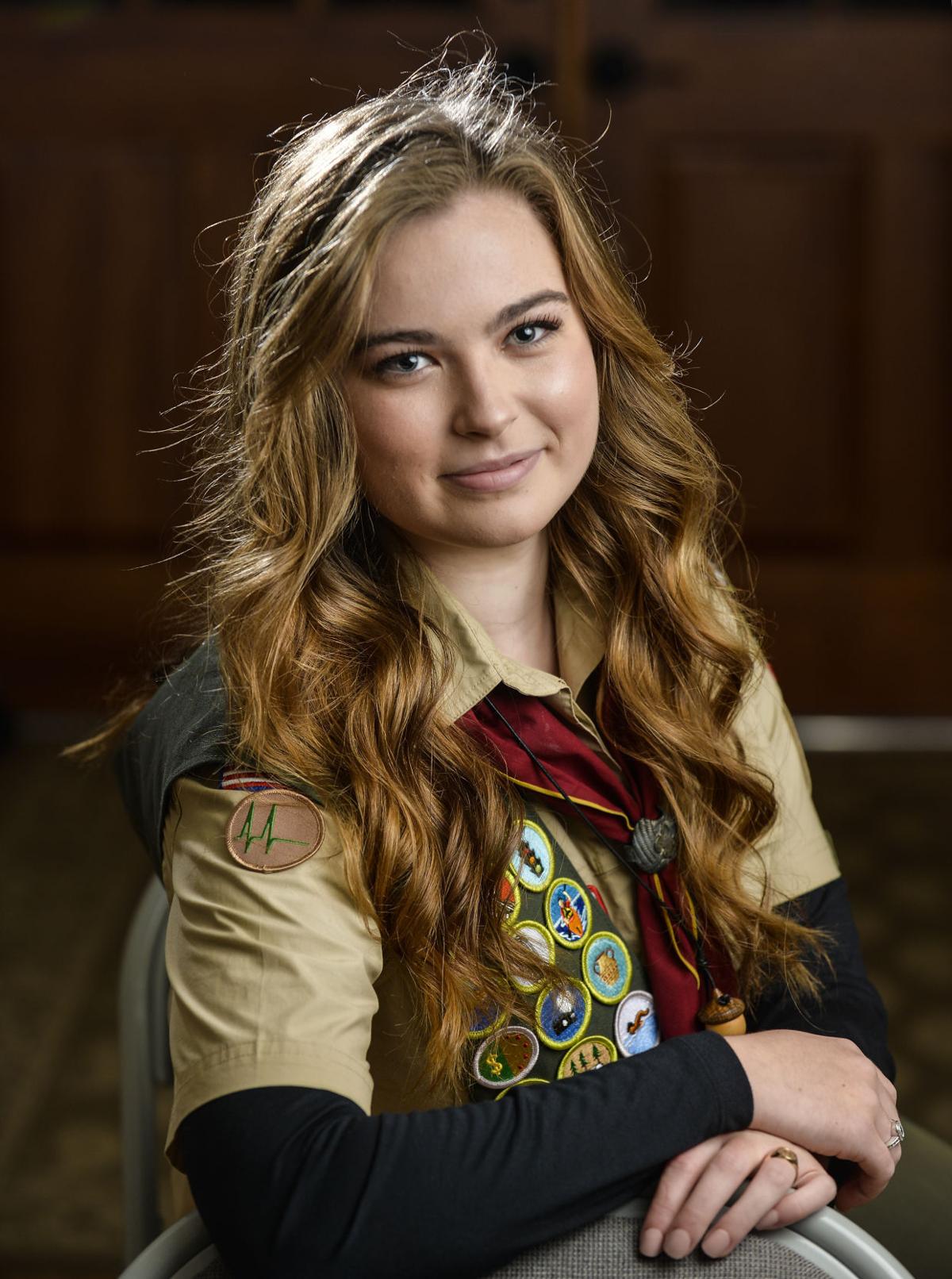 Juliana Hudry is the first girl in north Alabama to earn the Eagle Scout rank with the Scouts BSA program. [JERONIMO NISA/DECATUR DAILY] 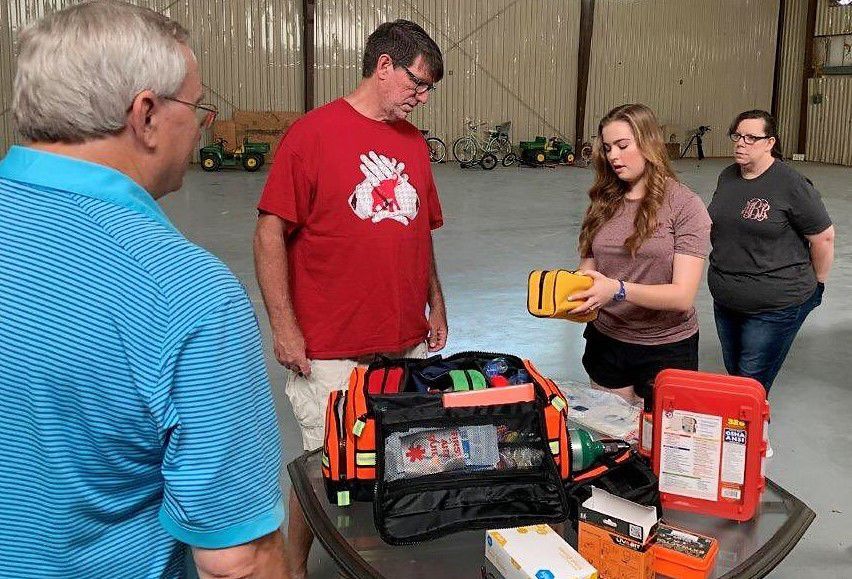 Juliana Hudry trains families at The Circle Ranch on how to use the equipment in the first aid kits. [COURTESY PHOTO] 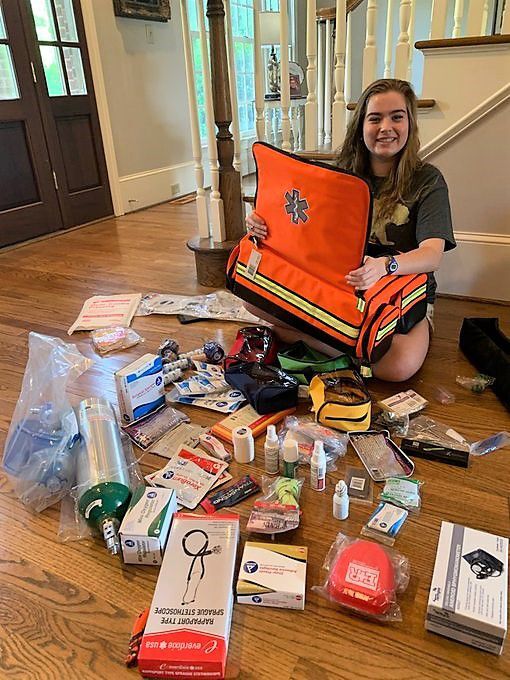 Juliana Hudry packs a first aid kit, which includes an oxygen tank, medicines and a snake bite kit, for The Circle Ranch in Danville. [COURTESY PHOTO] 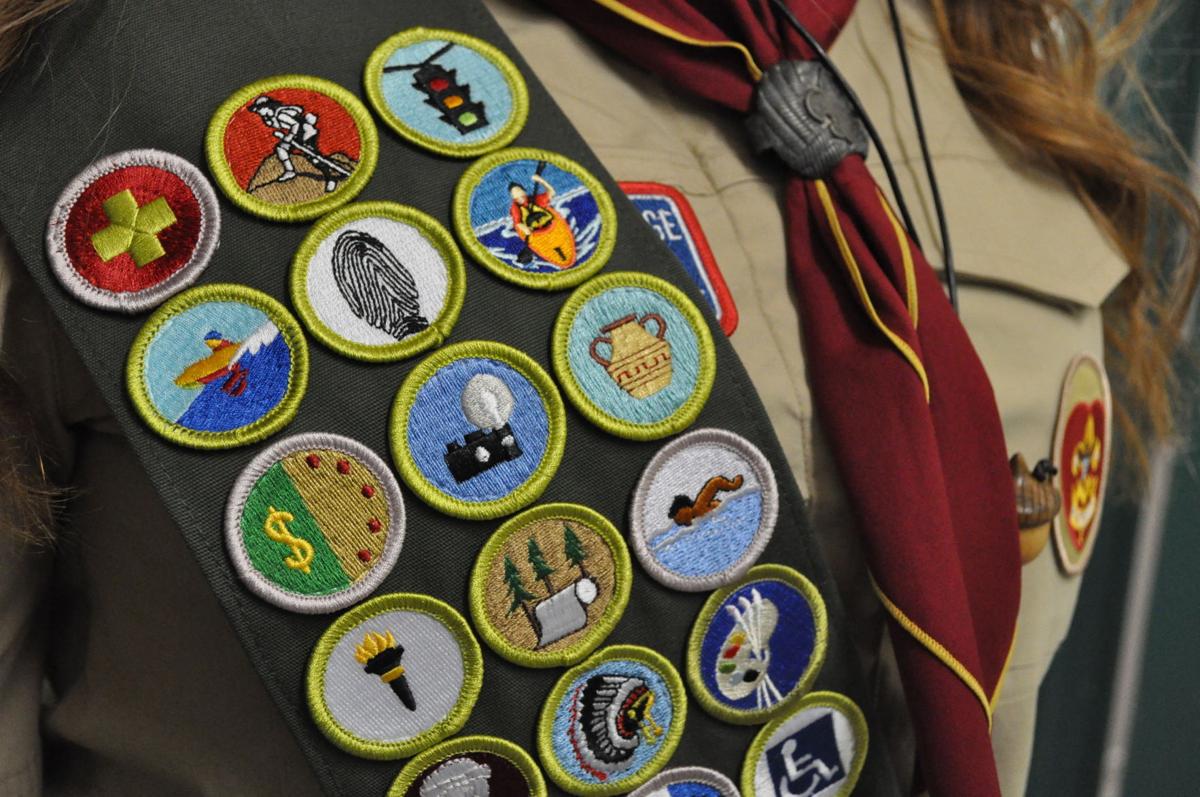 Since joining Scouts BSA in February 2019, Juliana Hudry has earned 31 merit badges, including the first aid badge, represented by a yellow cross on a red background. [CATHERINE GODBEY/DECATUR DAILY]

Juliana Hudry is the first girl in north Alabama to earn the Eagle Scout rank with the Scouts BSA program. [JERONIMO NISA/DECATUR DAILY]

Juliana Hudry trains families at The Circle Ranch on how to use the equipment in the first aid kits. [COURTESY PHOTO]

Juliana Hudry packs a first aid kit, which includes an oxygen tank, medicines and a snake bite kit, for The Circle Ranch in Danville. [COURTESY PHOTO]

Since joining Scouts BSA in February 2019, Juliana Hudry has earned 31 merit badges, including the first aid badge, represented by a yellow cross on a red background. [CATHERINE GODBEY/DECATUR DAILY]

For years, Juliana Hudry watched her younger brother go on outdoor adventures where he cooked over fires, camped outside and rappelled from cliffs.

“David went on these awesome trips and learned these cool things. I wanted to be part of it too, but never thought I would have that opportunity,” the 17-year-old Decatur Heritage Christian Academy senior said.

In February 2019, the door to those adventures opened for Hudry as Scouts BSA, formerly the Boy Scouts arm of Boy Scouts of America, began accepting females. Now, less than 2 years later, Hudry has earned 31 badges, ascended through the levels of tenderfoot, second class, first class, star and life and achieved the organization’s highest rank — Eagle.

A founding member of the Decatur-based Troop 455, Hudry is the first female Scout in north Alabama to earn the rank of Eagle. Boy Scouts of America will hold a court of honor ceremony celebrating the inaugural class of female Eagle Scouts in February. The class will include at least three scouts from the Greater Alabama Council, Hudry and females from Blount and Jefferson counties.

“Earning the rank of Eagle was my goal from the beginning. I really wanted it because of what it stands for, what it represents and all the awesome things that come with it and that I knew I would learn along the way,” Hudry said. “Also, I had to keep pace with my brother, who is four years younger than me and earned his Eagle in 2018.”

Considered a prestigious accomplishment, one earned by astronaut Neil Armstrong, director Steven Spielberg and former U.S. Sen. Jeff Sessions, only 6% of Scouts achieve the rank of Eagle, according to the Boy Scouts of America.

Called trailblazers, pioneers and history makers by leaders of Boy Scouts of America, more than 31,000 girls across the country have joined Scouts BSA since the program integrated in February 2019.

Instead of including girls in all-boy troops, new all-girl troops formed. Many, like the three-member Troop 455, found support from already established troops.

“We had so much help from Troop 142, my brother’s troop,” Hudry said. “They were all so supportive and made us feel so welcome. They wanted us to succeed. Everything they knew, they were excited to tell us.”

While both Troop 455 and Troop 142 meet at Wesley Memorial United Methodist Church on Monday nights and combine for the opening and closing ceremonies, the troops function separately.

“The female troop has been doing the same activities under the same conditions as the male troop. There have been times they have all worked together and, at times, they challenged each other,” said Brian Taylor, volunteer with Troops 142 and 455. “To earn the rank of Eagle, all Scouts must complete the requirements. ... It is not something that is gender based, or requires unique skills, but based on hard work and character."

To earn the rank of Eagle, Scouts must earn a minimum of 21 merit badges, organize and complete a community service project and sit for a board of review.

Hudry’s badges span from fingerprinting, pottery and photography to sailing, climbing and camping. She learned how to rappel from a cliff, about Native American folklore and how to cook over a campfire.

“Thankfully, Denise Marco, one of our leaders, taught me how to cook over a fire. If she wasn’t there, I probably would have starved,” Hudry said. “Each merit badge represents something new I learned or experience I had. I am so thankful for each one.”

For Hudry, the first badge she earned, the first aid badge, carries the most meaning.

“From the time I was little, I knew I wanted to be a doctor. Everything I have done has been working to achieve that, including volunteering in Decatur Morgan Hospital’s post-anesthesia care unit,” said Hudry, who plans to attend West Point Military Academy and study chemistry.

Hudry’s interest in medicine extended to her Eagle project, which involved creating a medical treatment room in The Circle Ranch’s gym, equipping the facility and families with trauma kits and training them on the use of the equipment. The Circle Ranch in Danville provides housing and care for foster families and children.

“We are so far away from medical attention, having these resources here is great. It gives us peace of mind,” said Gabe Ross, director of The Circle Ranch.

During the 275-hour project, Hudry led groups of volunteers from First Baptist Church, Troop 455 and Troop 142. She completed the project May 31 and sat for her board of review in October.

Hudry credited her family, troop leaders and mentors at church, Kris Hurst and Cathryn Buse, for shaping and molding her.

“I have been so blessed with the people who have poured into me. Watching Kris Hurst and Cathryn Buse, the way they love the Lord, their family and the people around them is something I aspire to be,” Hudry said.

Over the past two years, Hudry’s family witnessed her transformation from a mentee to a mentor.

“It makes me feel so good and so proud to see her pouring into the younger girls in her troop and passing on what she’s been given. This is a capstone moment for her,” said Hudry’s mother Twila Hudry.

Along with Scouts BSA, Hudry serves as a school ambassador, is a member of Key Club, runs cross-country and track, dances, volunteers with First Baptist’s Upward Basketball program and participates in the Decatur Morgan CEO program.

Way to go. So proud of you. Remember the sky is now not even the limit. Expecting to hear More great things from you. God Bless you.