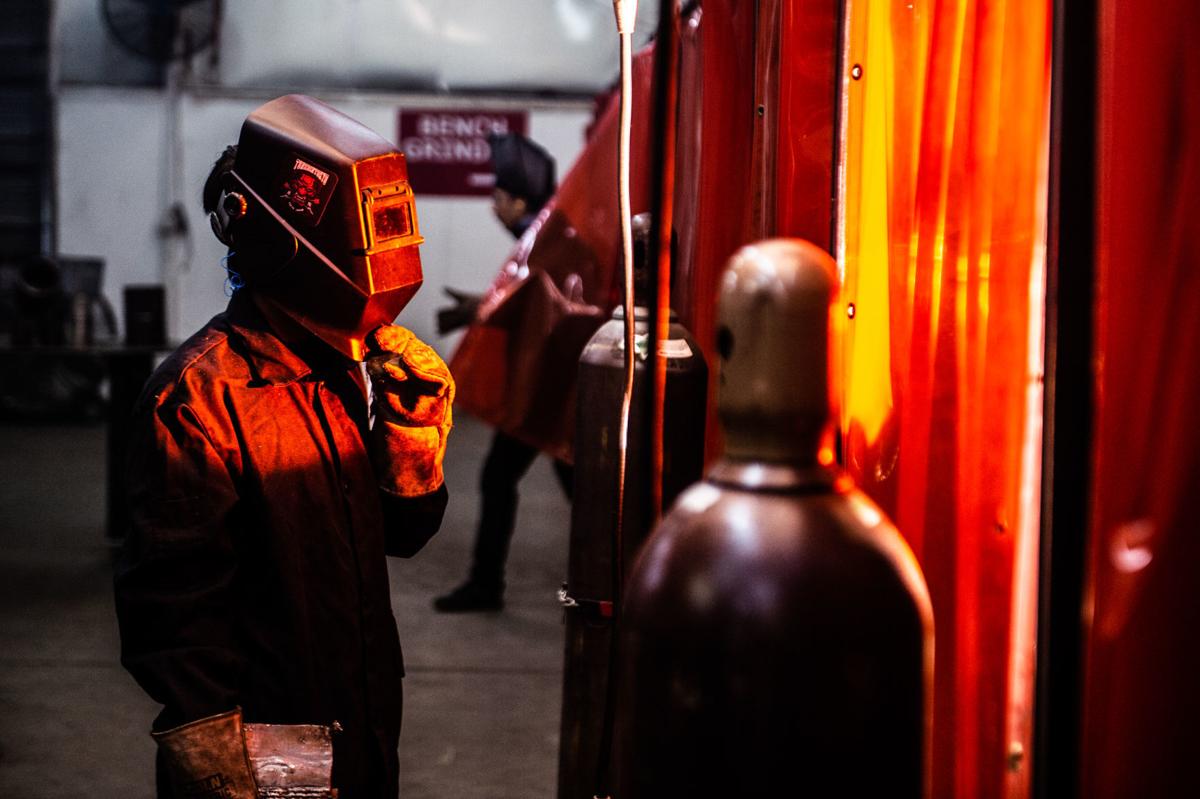 Antonio Nava-Flores watches through his hood as Anthony Romero, not pictured, welds inside a booth at Global Tech Institute earlier this year. Decatur City Schools' welding program has had room for only 20 students, but the system plans to spend almost $1 million to start a welding program at the Career Academies of Decatur that could accommodate as many as 120 students. [DAN BUSEY/DECATUR DAILY] 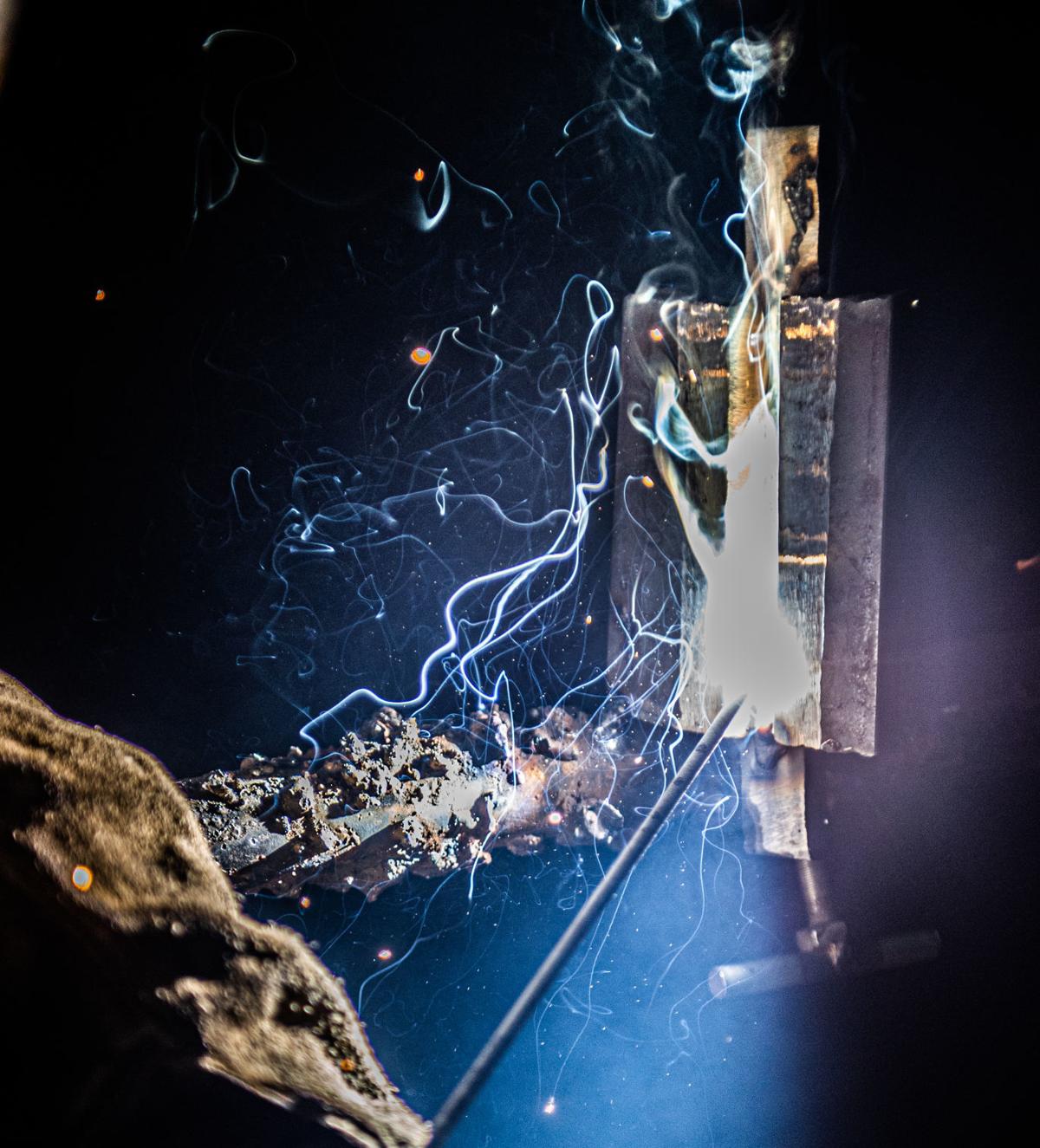 Antonio Nava-Flores watches through his hood as Anthony Romero, not pictured, welds inside a booth at Global Tech Institute earlier this year. Decatur City Schools' welding program has had room for only 20 students, but the system plans to spend almost $1 million to start a welding program at the Career Academies of Decatur that could accommodate as many as 120 students. [DAN BUSEY/DECATUR DAILY]

A $1 million investment Decatur City Schools is making in a welding program is the latest effort of Decatur-area school system to make sure a qualified workforce is available for jobs at the Mazda Toyota Manufacturing USA facility and suppliers associated with the plant.

“To say this plant has changed how we look at technical education would be an understatement,” Hartselle City Superintendent Dee Dee Jones said.

“We already had a mandate from the state to make sure every student graduates either ready for college or a career,” said Hopkins, whose system invested almost $1 million into revamping the district’s Morgan County Technology Park at Brewer High.

“We’re even under more pressure now because of all the growth in North Alabama,” he added.

Before Mazda Toyota picked Greenbrier for its location, Douglas said DCS was already looking at expanding its welding program because student demand was high and other industrial leaders “talked to us about the need for welders.”

Decatur students currently take welding classes at the Global Tech Institute in Decatur and 20 slots are available, 10 each for students at Decatur and Austin.

But the $1 million investment to start a welding program at the Career Academies of Decatur, which is at the old Austin High, will provide space for as many as 120 students, Douglas said.

Angie Cushing, a career coach at Decatur’s academy, said they rerouted about 60 students last year who wanted to be in welding to other programs “because we didn’t have the space.”

Cushing and DCS career and technical education supervisor Shelton Cobb interviewed every student requesting to be in the program.

“Being welding trained is an advantageous skill and we have too many students on the waiting list,” Cushing said. “Every time industrial leaders tour our facility or we meet with them, they talk about the need for welders.”

Jeremy Childers, career tech and workforce development director for Morgan County Schools, said the school district has had a welding program since 1973 and that former students are “scattered all over the United States making good money as welders.”

He said barely a month passes that the district doesn’t get a call from some company looking for a beginning welder, which generally makes about $18 per hour.

Hartselle students have access to welding classes through a dual enrollment program with Calhoun Community College.

“We’ve had this arrangement since 2014 and we have about 20 students per year in the program,” Jones said.

Mazda Toyota’s arrival has Decatur-area school systems expanding how they deliver career technical education in just about every area.

The plant’s opening — slated for 2021 — will create a huge demand for skilled labor, and a significant number of the jobs will not require four-year college degrees, Morgan County Economic Development Association President Jeremy Nails said.

This means Mazda Toyota, which plans to employ 4,000, will be counting on school systems to supply some of the plant’s workers, Nails said.

Suppliers to the plant are expected to bring several thousand more jobs to the area.

In addition to welding, Douglas said DCS is looking to open two additional bays for automotive mechanics and expanding general maintenance offerings so that students can graduate with certifications in trades such as electrical and plumbing.

“We believe in what we’re already doing, but when a plant has specific needs, we have to meet those needs because every student is not going to college,” Douglas said.

Jamie Hall, a project manager and adviser for production hiring at Mazda Toyota, said recently that 3,000 of the 4,000 jobs will be production team leaders and team members.

To fill the positions, Hall said, the plant will need 40,000 applicants because only 7% to 10% “will actually pass our process.”

“We are aware of the challenges of getting students ready for a job and we have been for years,” Hopkins said.

Mazda Toyota elevated the challenge, “because it’s not just jobs in their plant, but jobs suppliers are generating,” he said.

Nails said a big change since Mazda Toyota picked north Alabama for its assembly plant is employers and educators have gotten on the same page, and students now understand they can have great careers in the Decatur area without four-year degrees.

“This is a major shift in thinking,” he said.

Nails said school systems know what industry is expecting and have ramped up career technical education that will allow students to graduate and obtain gainful employment.

“A student may not be good at English or plan to get a four-year degree, but that student can make a good living in the area with the proper certification or with a two-year degree,” he said.

After meeting with Mazda Toyota officials about a year ago, Jones said, Hartselle added programs that will allow students to graduate with Manufacturing Skill Standards Council certification.

MSSC is an industry-led nonprofit that provides national standards for training and certification, offering entry-level and more experienced workers an opportunity to acquire skills they need to work in a manufacturing sector that’s no longer “grit and grind,” school leaders said.

“They told us every employee needs this certification,” Jones said, adding that the state in 2012 put in place a directive requiring school systems to make sure every graduate is ready for college or a career.

In Athens City, the school district has formed a partnership with Drake State Community and Technical College that will allow students to graduate with MSSC certification.

“The 21st century jobs are technology driven,” said Gia Russell, who handles career technical education for Athens City. “We’re having to integrate what these students need into our curriculum.”

She said Athens City also has implemented the state’s Ready to Work program, which is operated by the Alabama Community College System, and teaches a set of standards business and industry leaders say employers need.

John Seymour, president of the Decatur-Morgan County Chamber of Commerce, said he’s not surprised at the challenges school systems are facing as the manufacturing sector heats up.

About 20 years ago, the chamber commissioned a report that identified 25% of the jobs in Morgan County as being in manufacturing. He said there has always been a challenge in the Decatur area to provide a specialized workforce and training for workers.

Hopkins, too, said he has been aware of the challenge.

“We’re a rural school system, so we’ve always had a big need to prepare students for jobs that don’t require college degrees,” he said.

We're always looking for story ideas, and many of our best ones come from readers. The strongest tips include documentation or inside knowledge, but we welcome any ideas that would be of interest to readers in Morgan, Lawrence and Limestone counties.

Even if you need to remain anonymous, we encourage you to include a phone number in the email or voicemail so we can contact you for additional background information.

Send your tip to tips@decaturdaily.com, leave us a message at 256-340-2486 or click the button below to submit your information through our online form.