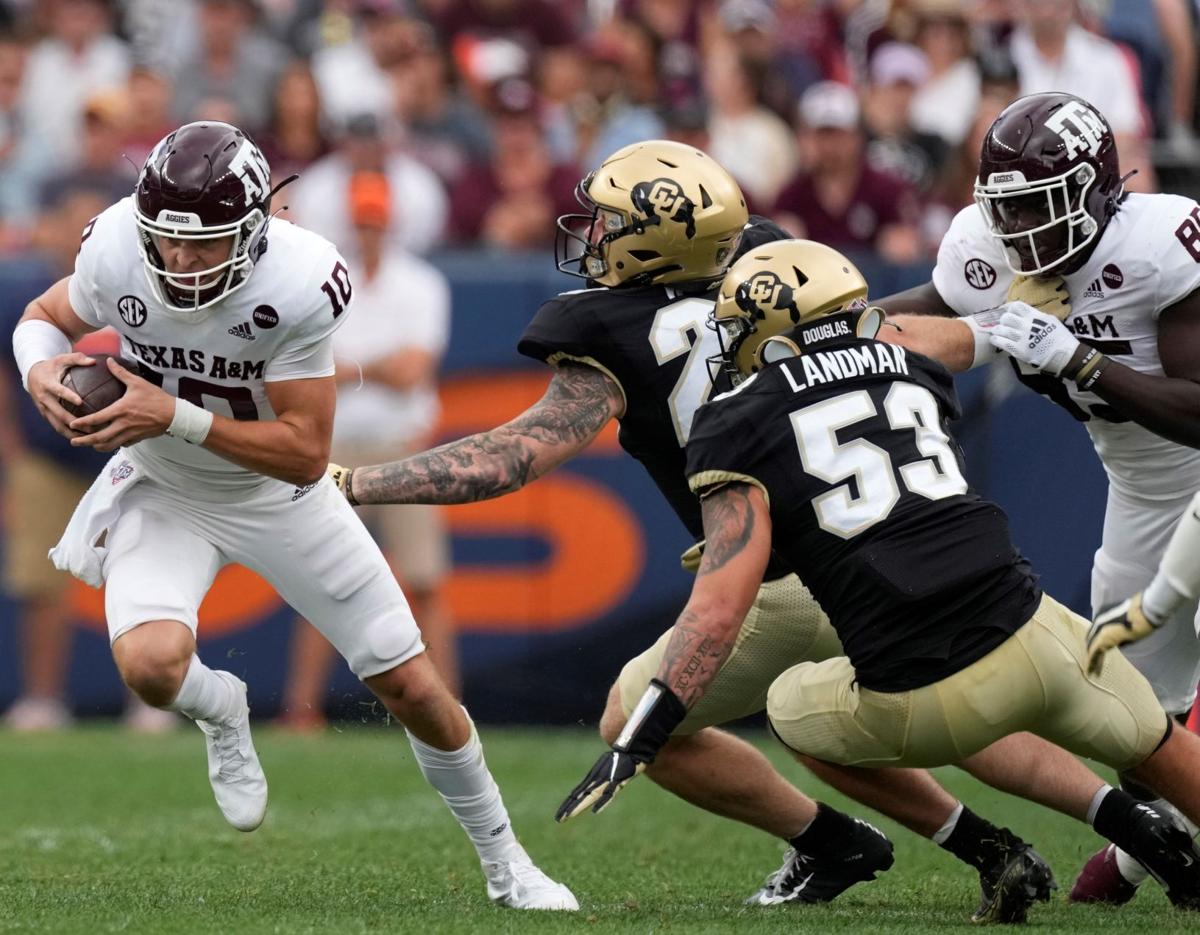 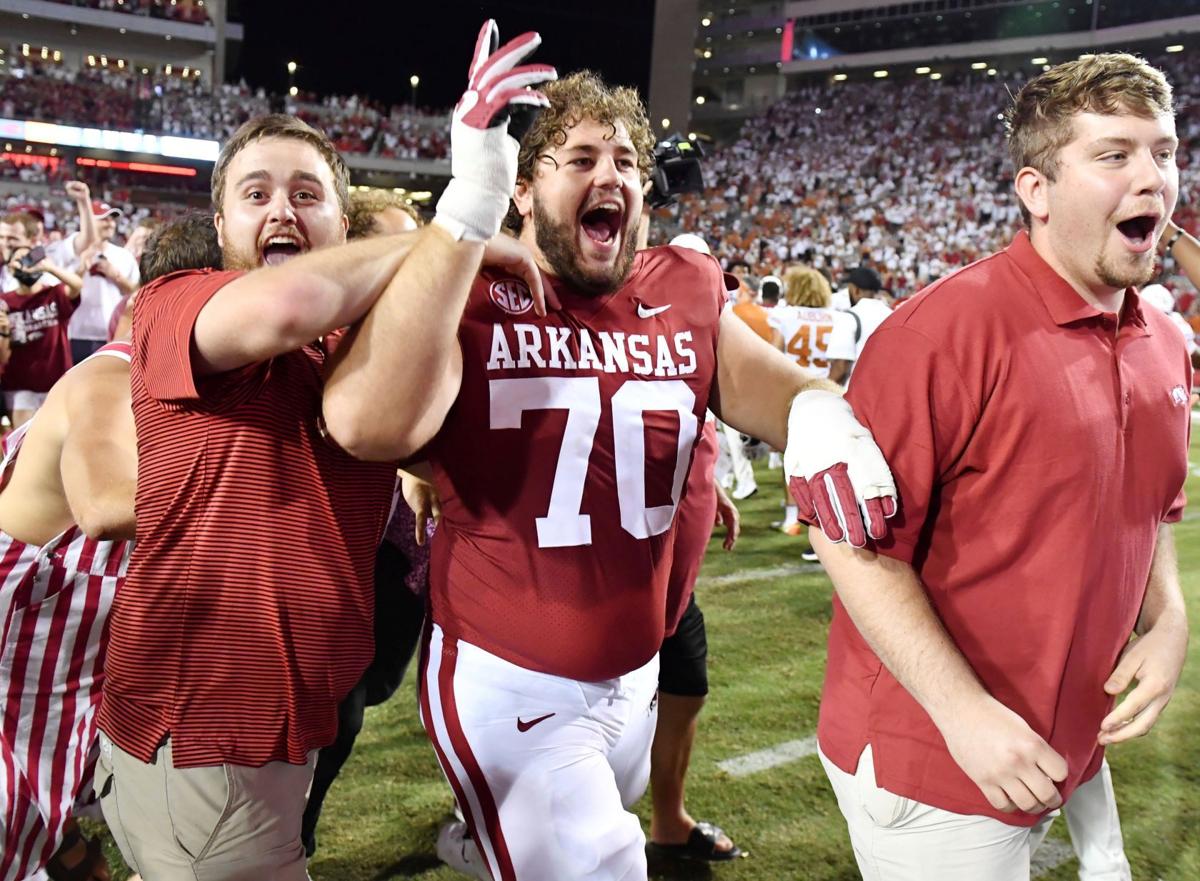 Arkansas lineman Luke Jones celebrates after the Razorbacks beat Texas to help them get ranked for the first time since 2016. [MICHAEL WOODS/THE ASSOCIATED PRESS] 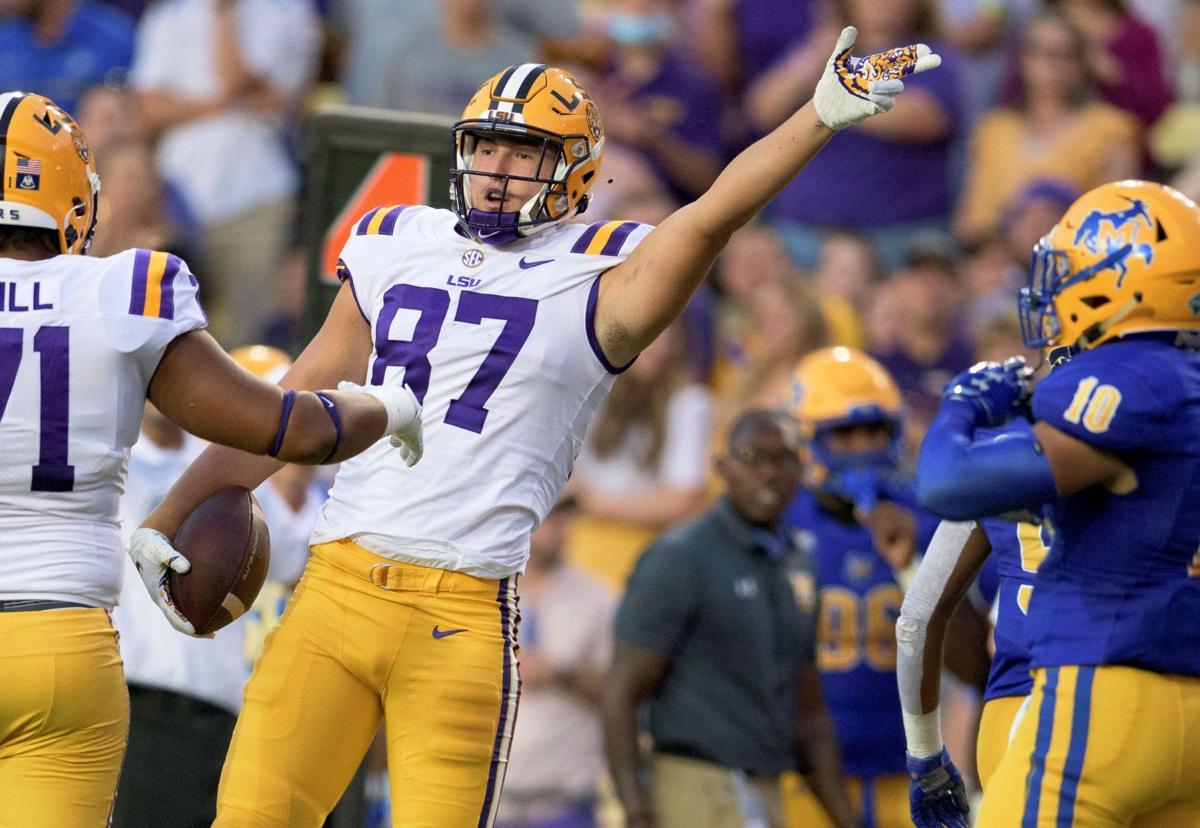 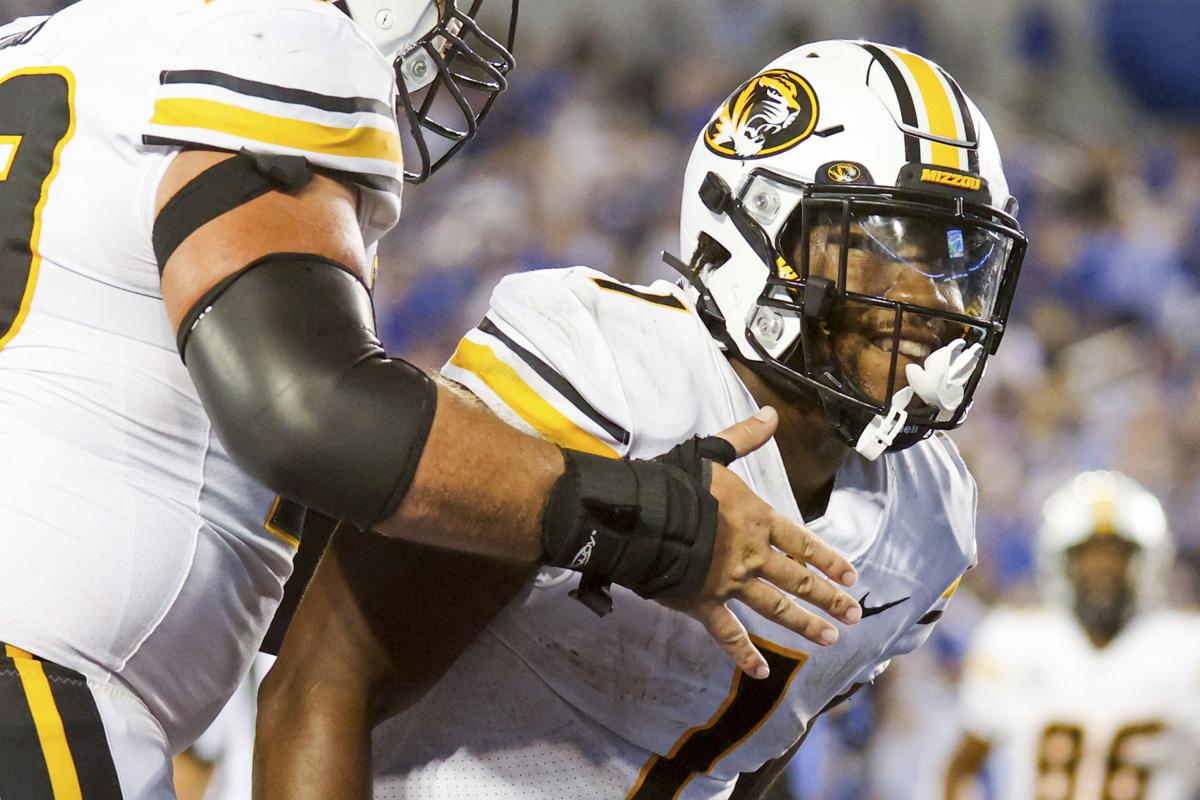 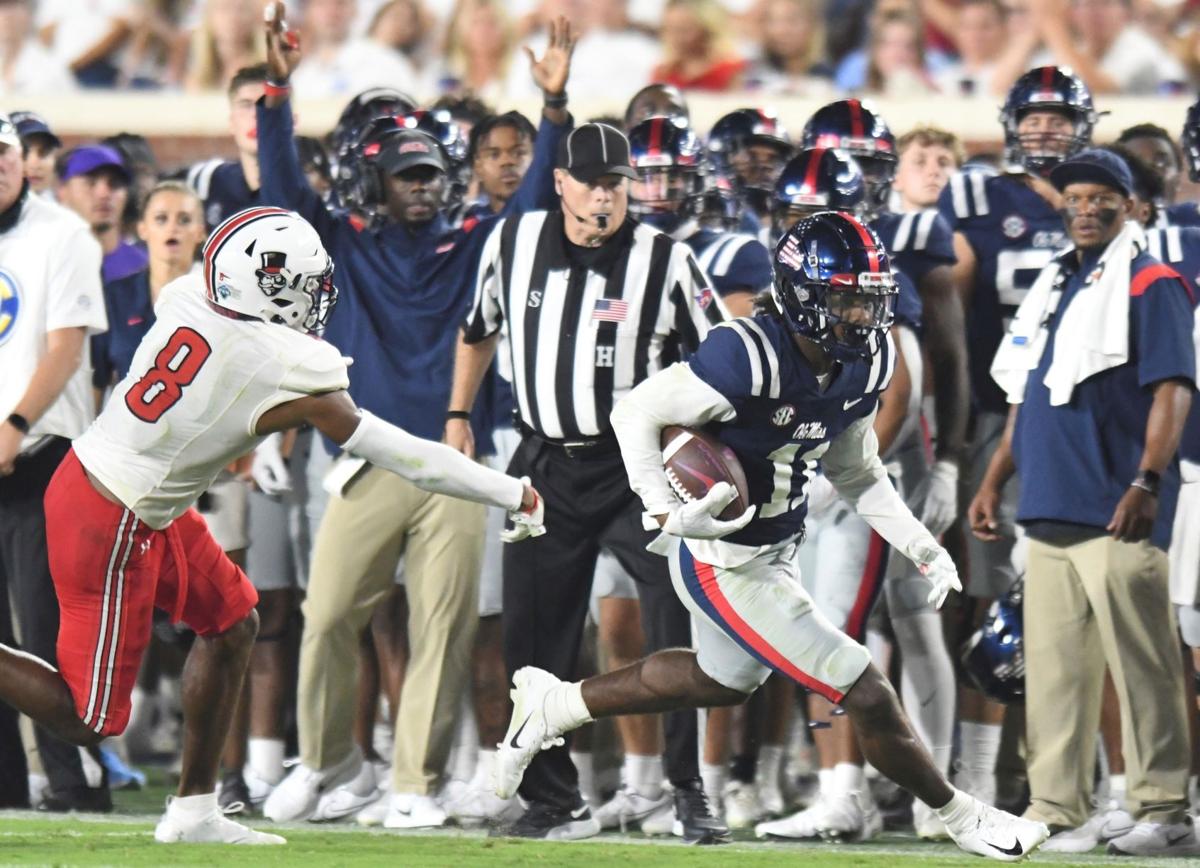 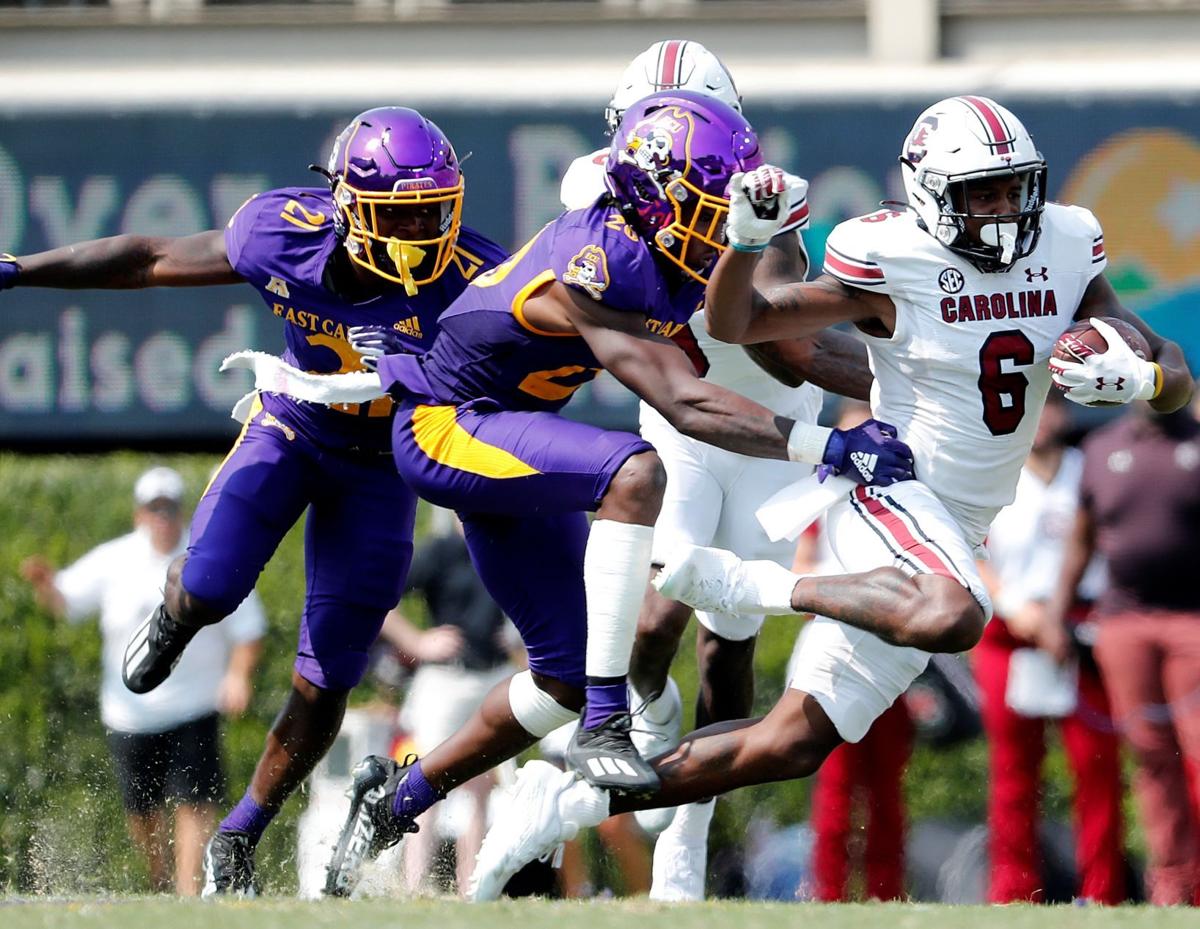 South Carolina's Josh Vann (6) tries to get away from East Carolina defenders last week. This week, he'll try to do the same against the Georgia Bulldogs. [KARL B DEBLAKER/THE ASSOCIATED PRESS]

Arkansas lineman Luke Jones celebrates after the Razorbacks beat Texas to help them get ranked for the first time since 2016. [MICHAEL WOODS/THE ASSOCIATED PRESS]

South Carolina's Josh Vann (6) tries to get away from East Carolina defenders last week. This week, he'll try to do the same against the Georgia Bulldogs. [KARL B DEBLAKER/THE ASSOCIATED PRESS]

The lowdown: Texas A&M starting quarterback Haynes King is out indefinitely after undergoing surgery last Sunday to repair a broken leg suffered in the win over Colorado. … Redshirt sophomore Zach Calzada is set to start in King’s place. He completed 18 of 38 passes for 183 yards and a touchdown against the Buffaloes. … Terry Wilson Jr. threw for 381 yards and three touchdowns in New Mexico’s win over New Mexico State last week, while Bobby Cole ran for 107 yards and a score. … The Aggies are going for their 11th straight win, which would be the program’s longest streak in 29 years.

The lowdown: A win by Kentucky would it the Wildcats their first 3-0 start since 2018. … Chattanooga last played a Power 5 team in 2019. The Mocs lost to Tennessee 45-0. … Kentucky finished with more than 500 yards of total offense in each of the past two weeks. It’s the first time in school history that’s happened. … Chattanooga had six sacks and nine tackles for loss in last week’s win over North Alabama. … The Wildcats have three receivers — Wan’Dale Robinson, Josh Ali and Isaiah Epps — with at least three receptions averaging more than 22 yards per catch.

The lowdown: Missouri opened SEC play with a 7-point loss to Kentucky last week. … Southeast Missouri State is 1-24 all-time against FBS opponents. The Redhawks’ win was against Middle Tennessee in 2002. … Tigers running back Tyler Badie is 53 receiving yards away from becoming the first player in program history to have 1,000 career rushing and receiving yards. … Both of Southeast Missouri State’s losses this season have come against ranked FCS opponents. They lost to No. 7 Southern Illinois in Week 1 and then lost to No. 1 Sam Houston State last Saturday.

Georgia Southern at No. 20 Arkansas

The lowdown: Arkansas is looking for its first 3-0 start since 2016. That’s also the last time the Razorbacks have been ranked in the AP Top 25. … Georgia Southern is 1-13 all-time against current teams from SEC. Its win came at Florida in 2013. … Arkansas is averaging 39 points per game and is only giving up an average of 19. … It’s the other way around for Georgia Southern, which has managed just 18 ppg, while surrendering 31.5 ppg to opponents.

The line: Mississippi State by 3½

The lowdown: This will be the first meeting between the teams since Sept. 1, 2011. Mississippi State has won 12 straight in the series. … Bulldogs quarterback Will Rogers leads the nation in completions per game with 36 and is fifth in completion percentage at 75%. … Tigers quarterback Seth Henigan is averaging 341 passing yards and three touchdowns per game. … Mississippi State has five sacks with four coming in last week’s win over North Carolina State. … Memphis is giving up 489.5 yards per game on defense.

South Carolina at No. 2 Georgia

The lowdown: The status of Georgia starting quarterback J.T. Daniels is unknown, meaning Stetson Bennett could get his second start in as many weeks. Bennett completed 10 of 12 passes for 288 yards and five touchdowns in last week’s win over UAB. … South Carolina quarterback Luke Doty could make his season debut after missing the first two weeks with a foot injury. … Georgia’s defense has played well. The unit has 10 sacks, 14 tackles for loss and four interceptions so far.

The lowdown: Both schools are coming off wins against FCS opponents. LSU beat coach Ed Orgeron’s son and McNeese State 34-7, while Central Michigan beat Robert Morris 45-0. … Despite the opponent, the LSU defense looked a little bit better last week. The unit recorded eight sacks. … The Chippewas rushed for 307 yards last week on 20 carries. De’Javion Stephy and Lew Nichols ran for 81 and 79 yards, respectively. … LSU has won seven straight and 56 of its last 57 non-conference games at home.

The lowdown: Ole Miss has only lost one non-conference game since 2012, which was against Cal in 2019. … This will be Tulane’s third straight road game. Hurricane Ida moved the Green Wave’s season opener to Norman, Oklahoma. Tulane played its second game against Morgan State at Legion Field in Birmingham. … The Rebels haven’t had any trouble scoring points the past two weeks with 54 against both Louisville and Austin Peay. They’re averaging 599.5 yards of total offense. … Tulane has outscored opponents 104-60 this season.

The lowdown: Vanderbilt snapped an 11-game losing streak by beating Colorado State last week. … Stanford is coming off a 42-28 win over then-No. 14 USC, which ultimately got Trojans coach Clay Helton fired two days later. … This will be the Commodores' first game against a Pac-12 opponent since 1961 when it played at UCLA. … Stanford is the only program set to play 12 Power 5 schools this season. … Vanderbilt has tallied 663 yards of total offense this season, but is giving up 759 yards to opponents, including 445 to Colorado State.

A look at this week's state football games

A breakdown of this week's state college football games.

A look at Saturday's game between the Auburn Tigers and Penn State Nittany Lions.

Nittany Lions turn out 'white out' for AU

AUBURN — If Bryan Harsin thinks a speaker system can purely replicate what the crowd noise will be like at Penn State this weekend, he's in fo…

GameDay preview: No. 1 Alabama at No. 11 Florida

A look at Saturday's game between the Alabama Crimson Tide and Florida Gators.

A look at Tennessee's third game of the season against Tennessee Tech.

A look at Saturday's game between the North Alabama Lions and Jacksonville State Gamecocks.

UNA football has been up and down, but the secondary has continued to play well

FLORENCE — During training camp, K.J. Smith held the belief the North Alabama secondary had the potential to cause opposing quarterbacks probl…